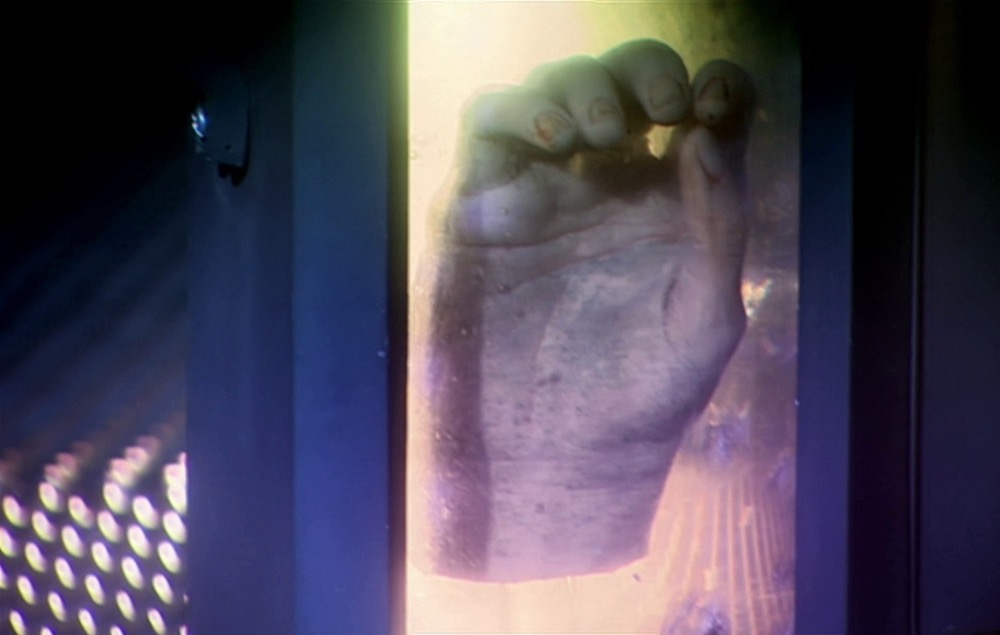 Amazon launched a new biometric scanner that allows customers to pay for their groceries by scanning their hand and WHOOPS THEY DID A MINORITY REPORT.

The feature is rolling out to the company’s cashier-less Amazon Go grocery stores, where you just take what you want and Amazon works out how much you owe through a combination hi-tech cameras, scanners, and probably some dude sitting in a warehouse in India watching you shop.

Most Amazon go stores use a “Just Walk Out” technology that automatically bills your Amazon account for the groceries. But now users will have the option to pay by scanning their handprint like an early 90s movie spy.

To use the dystopian science-fiction payment system, you need to register your palm print with Jeff Bezos’s Data Sucking Machine, connect it to your credit card, and hope that no one chops off your hand to buy eggs. 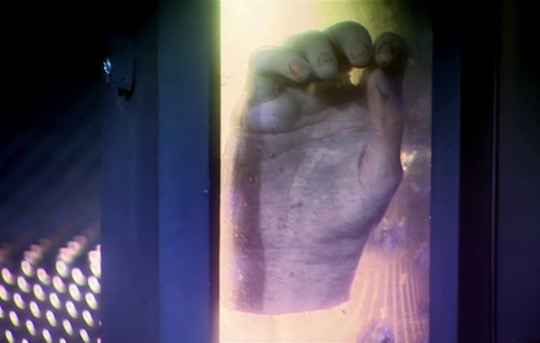 Shall we use your card or mine?

Amazon says it opted for palm-scanning technology because its’ “considered more private” than eye-scanning, facial mapping, and genital recognition technology.

“You can’t determine a person’s identity by looking at an image of their palm,” said Amazon, ignoring the fact that the scans are connected to a credit card that contains all that information.

Amazon is rolling out the feature today in two of its Seattle stores, with plans to install the tech in all 12 of its Amazon Go locations in the near future. After all the bugs are worked out and they’ve found a way to deter James Bond-types from chopping off hands to open doors, they’ll attempt to sell the technology to other companies.

The company sees a use for its cyberpunk payment system in retailers, stadiums, and office buildings, and says it’s already got a couple of fishies on the line.

Its clear now that Amazon’s cashier-less grocery stores are less of a dedicated effort to launch an Amazon grocery chain (they already have Wholefoods for that) and more of a human testing ground to develop technology to sell elsewhere.

However, some retailers are worried that adopting the technology in their stores means handing over customer data to Amazon, who will in turn use that information to bury the competition and lay waste to everything that isn’t Amazon.

Dilip Kumar, Amazon’s vice president of physical retail and technology, told Recode that Amazon One will only collect data on where customers shop, but not what they’re actually buying. (For now.)

One of the many fires that make up what’s left of California has destroyed seven vineyards in the Napa Valley and threatens many more (and I’m not saying it’s because they started charging for “free” wine tastings but those are two things that have happened).

The Glass Fire started at 4 AM on the Napa-Sonoma border and quickly spread at a dangerous rate, engulfing homes and businesses and forcing entire communities to evacuate.

The fire is moving so fast, it’s difficult to stock of the damage done but several wineries and vineyards and other places rich yuppies like to hang out have been destroyed, according to photographers and journalists active in the region. 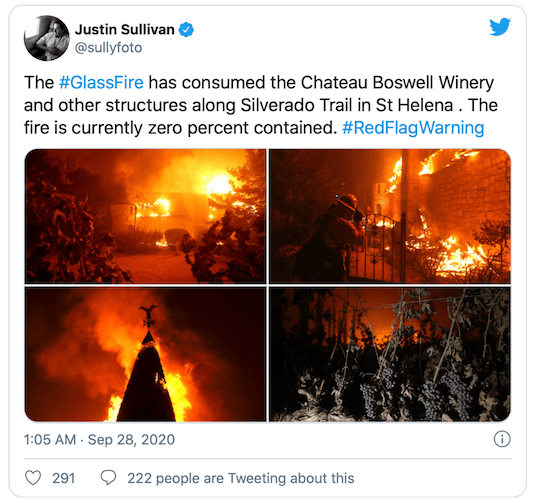 There’s never a good time to get a giant fire that destroys everything in its path, but now is particularly bad timing for Napa’s wineries.

The fires hit right bang in the middle of Napa’s grape harvesting season. And while most of the grapes for white wine and rosé have already been picked, growers were just getting started on the grapes for the red (which is the only good wine).

Even the grapes that aren’t completely blasted in a fiery inferno may not be useable, as grapes grown near smoke can be tainted with an ashy bitter taste. If wine connoisseurs were like beer nerd you could just slap an X-Man on the label and call it Jean Gray: From the Ashes IPA, but much of this harvest will likely be wasted.

These fires are “without question the single worst disaster the wine-grape growing community has ever faced,” California Association of Winegrape Growers President John Aguirre told the Associated Press.

These fires, which are far from over, will heavily impact the state’s wine industry which employs 30,000 people directly and feeds a steady string of tourists into local hotels, rentals, and restaurants.

The US government likely exceeded its authority when it tried to banish TikTok to the shadow realm, according to the judge who prevented the ban from taking effect Sunday.

In his 18-page ruling, Nichols sided with TikTok owner ByteDance and determined that the ban “likely exceeds” the powers of the IEEPA (pronounced like the noise you make when an ice cube slides down the back of your pants).

While the case is far from settled, the judge elected to block the ban on the grounds that preventing downloads while litigating would harm TikTok’s business by freezing its user base, damaging its relationships with advertisers, and probably allow an even more annoying social media app to blossom in its absence.

“TikTok has proffered unrebutted evidence that uncertainty in TikTok’s future availability has already driven, and will continue to drive, content creators and fans to other platforms,” Judge Nichols wrote. “The nature of social media is also such that users are unlikely to return to platforms that they have abandoned.”

The Judge’s decision gives ByteDance time to negotiate with US and Chinese authorities on the formation of a new company based here in the US, called TikTok Global.

The Commerce Department said in a statement that it would comply with the injunction but that it’s going to get TikTok next time “and your little WeChat too. AHAHAHAHAH!”

I uh… I have some Yelp reviews to delete. (Source)

Whether you like him or not, President Donald Trump has ignited one of the greatest opportunities the stock market has ever seen.

I’m not talking about the stock market as a whole, although most major indexes have indeed hit countless new all-time highs during his first term.

No, I’m talking about a very specific area of the stock market, that has been left for dead for the last 40 years.

A Presidential Memorandum that Changes Everything

It all started on July 22nd 2019, when President Trump signed the most important memo of his first term.

In a single act, the President sent a signal that the U.S. economy was about to start a tectonic shift. One that would undo 30+ years of economic decline — and generate trillions of dollars’ in wealth in the years to come.

The media barely noted this development, as the Democrats had just launched their impeachment investigation into the President’s interactions with Ukraine. And Wall Street didn’t catch on either, as they were too busy worrying about the trade war with China.

However, nestled within the two paragraphs of Trump’s Presidential memorandum to the Department of Defense was one of the biggest statements in the history of the U.S. national defense… and the U.S. economy.

The President invoked section 303(a)(5) of the Defense Production Act.

The Defense Production Act was established in 1950 during the Cold War between the U.S. and the Soviet Union. In its simplest rendering, the Act gave the president the ability to accelerate key sectors of the U.S. economy in the name of national security.

Let’s say the U.S. economy relies excessively on another country for a certain resource. If the President decides that this reliance could hurt the U.S. economy from a strategic perspective, he can invoke the act to dramatically cut regulations and even provide government loans to domestic producers of the resource in order to boost domestic production.

In the case of President Trump’s memo in July 2019, he was invoking section 303(a)(5) of the Defense Production Act of 1950 to determine that the “separation and processing of Light Rare Earth Elements is essential to the national defense.”

While this particular memo concentrated on rare earth elements, as a broader policy it sent the signal that the Trump administration views the domestic production of strategic elements as a matter of national defense.

Put another way, going forward, President Trump will be “green lighting” projects that speed up the development and production of everything from steel to uranium, copper, cobalt, lithium, and more.

“To speed up construction projects, Trump plans to overhaul one of the nation’s most consequential environmental laws… would make it easier to build highways, pipelines, chemical plants and other projects that pose environmental risks… it would force agencies to complete even the most exhaustive environmental reviews within two years and restrict the extent to which they could consider a project’s full climate impact.”

This is the single biggest development in the markets in decades. Entire industries that have been left for dead will begin to come back to life as TRILLIONS of dollars’ worth of capital begins to flow into these sectors.

We’ll be developing this theme more in the weeks ahead.