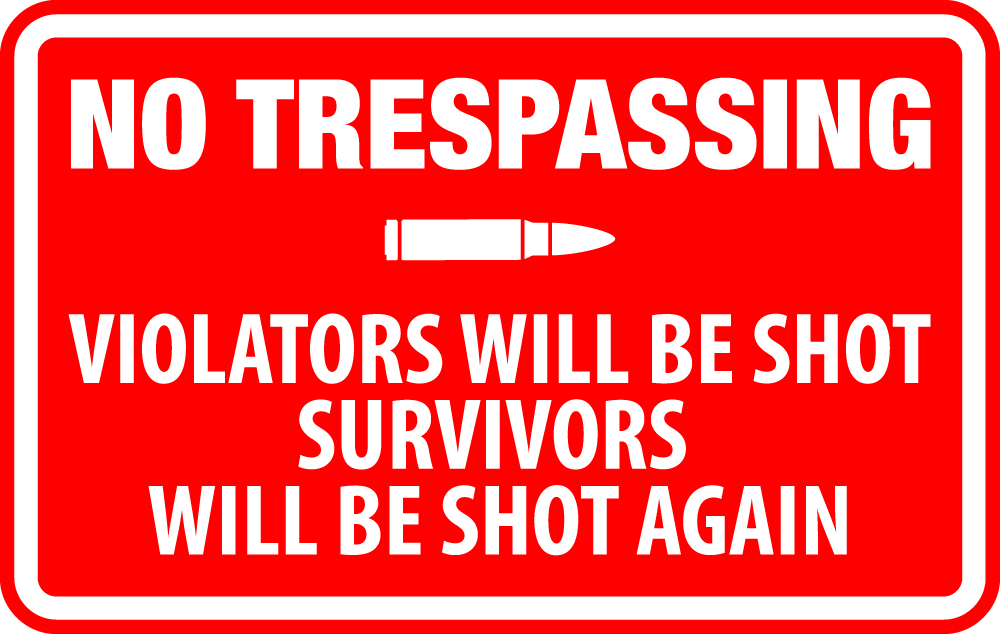 Why My Neighbor Isn’t A “Gun Nut” Anymore…

Just when I think my words are falling on deaf ears, God sends me a message to keep on preaching…

No, not about the coming biblical (or zombie) apocalypse.

I’m talking about how to stop gun-owners from making stupid mistakes that can put YOU in prison right next to the street scum you’re trying to defend against.

Remember a few years ago when I made this video about how my “gun nut” neighbor thought his funny “No Trespassing” sign was protecting his property?

Well I guess my neighbor saw my video because not long after that, I went for a run and saw he had taken a magic marker and wrote over it so it just said…

Well, it took a while, but he finally put up two new signs, “No Trespassing” and “Beware of Dog.”

I was happy as a little girl scout who just sold her millionth box of Thin Mints when I took a jog and saw these two signs replace the old “funny” ones.

But because these signs will better protect him against a home invasion — AND in court — if he’s ever forced to defend himself.

Having any kind of a warning sign (funny or not) tips your hand that you… well… own guns.

Especially free ones that can be used for crimes or sold off for a pretty penny on the street.

Sure, they may not show up at your bedroom window to break in at 2 a.m.… But they could target your home during the day (when most break-ins happen) and take their time looking around for all your firearms while you’re out for the day.

The biggest danger here is if you or a family member unexpectedly comes home to find this criminal already in the act… and CAUGHT!

A cornered animal does unexpected — and sometimes vicious — things to protect itself.

You don’t want a panicked, desperate burglar trying to figure out what to do with you, your spouse or your child who can now give their description to the police.

There’s only one thing that strikes fear into a home invader more than a vicious dog… and that’s a vicious GUN OWNER with a dog!

Now frankly, I don’t know if my neighbor has a mean dog… or if he even HAS a dog.

Doesn’t really matter as long as criminals think he does, right?

Whether you own one or not, a “Beware of Dog” sign is a really, really good deterrent for criminals.

A “No Trespassing” sign is simple… straight to the point… and let’s others know that you’re more aware than the typical homeowner.

To a jury, funny signs (like “We Don’t Dial 911”) will make you look like a gun nut who was just itching for someone to pick off with your smoke wagon.

If you ever DID have to shoot someone in your home — especially if you killed them — a prosecutor could possibly make a case that you used excessive force… And your sign “proves” you went too far.

I know you probably think these types of signs (or bumper stickers or shirts) are harmless… but they won’t be funny to a jury.

Remember, our legal system is NOT about “justice” — it’s about the LAW.

That’s why we literally give our Bulletproof Defense DVD away for FREE to responsibly-armed citizens on our website here.

If you don’t have a copy, get yours now. Not only will this DVD show you EXACTLY when you’re legally justified to use your firearm for personal defense…

But it can even be entered as evidence in your defense!

I’ll explain why this is important in my personal video here.

It’s the best way I can prepare you for the unfortunate reality some citizens discover the hard way by making the wrong move.