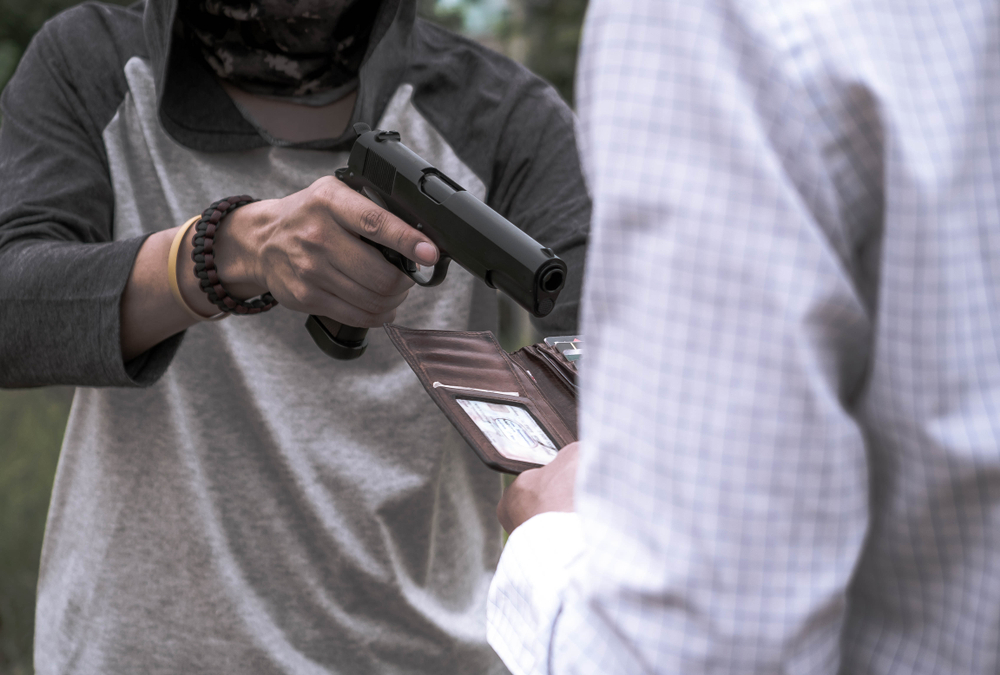 Their only goal is to victimize you with the least amount of resistance… take what they want… feel the power surging in their veins from terrorizing you and your companion… and be gone before they’re identified.

For this reason, they’ll ambush you at close quarters rather than stroll up from 20 yards away to give you time to react.

So when you have a gun pointed in your face and no time to get to yours, there’s only one thing you can do…

So here’s a weird “Jedi mind trick” to regain the offensive in a mugging.

This tactic is just one of the sneaky tricks you can use if you’re ever caught in a sudden ambush.

What day is today?

How old are you?

First of all, the human brain is genetically programmed to react to outside stimuli.

If you’re walking down the street and somebody calls your name, you’ll instinctively turn to see who’s calling you.

So when you ask your attacker a question, it involuntarily engages the part of their brain that requires them to think of an answer — especially if they KNOW the answer to the question like in the examples above.

In psychology terms, this is called a “break state.”

What it MEANS is that they’re not thinking of shooting you. They’re reacting to YOU, as opposed to you reacting to THEM.

In other words, you just bought yourself a split second of offense, which is all you need to turn the tables on your attacker and take them out.

Most of what’s taught today (even in high-priced “tactical schools”) is pure BS.

These techniques work great against paper targets that aren’t able to shoot or stab you in close quarters (and won’t try to beat you into the ground) but will get you KILLED in a real “ambush-style” attack.

That’s why we developed our Advanced Stopping Power Secrets report — to cut through much of the misinformation put out there.

This report not only includes facts that can save you from an attack but also teaches you what NOT to do when facing an enemy.

In fact, we pressure-tested these techniques in realistic scenarios and made all the mistakes FOR you… so we can show you what REALLY works when an attacker is charging your way with a knife in their hand.

Grab the free report and see why you really MUST base your weapon… ammo… and tactics on realistic attack scenarios in order to stop an attacker before they’re able to do deadly damage to you or a loved one.