Vector Space (Part 2): The New Face of the Space Race

We’re back with Part Two where Jim Cantrell, CEO of Vector Space Systems, reveals the face of the new Space Race, how Vector plans to “make rockets like sausages,” who the most famous human being in the Universe will be and what role cryptocurrencies will play in this revolution.

The government’s not going to do it. The government may say they’re going along, but they’re just there for the ride.

They’re following in this case.

What’s happening is entrepreneurs now have made enough money that we can actually rival what the governments used to claim as their own domain.

The governments have become so incompetent in how they execute this basic function of space travel, it’s left the door wide open for the entrepreneurs. And we rushed in. We didn’t realize we were rushing in in the beginning, but we did.

Look below at what all the various rockets being built are compared to Vector [all the way on the left]. You can see we’re just teeny little things. That’s all you need to do this job. And we’ll build more of them instead of build them large. 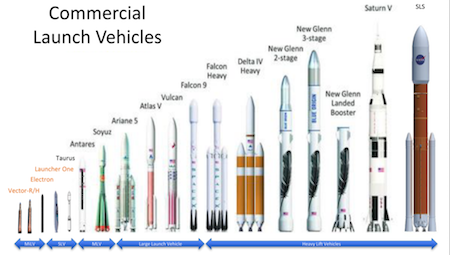 How often do you think they’re going to launch this beast? About every eighteen months. That’s how long.

That’s what we’re spending our tax dollars on.

Vector is doing something different. We’re going to build our rockets like sausages like the Russians said they would. We really are.

[CHRIS’ NOTE: During the Cold War, a Russian official, in an effort to stoke fear, boasted their factories were rolling out rockets “like sausages.” This turned out to be false, as the feared “missile gap,” declassified Soviet documents revealed, wasn’t just wildly overblown, it didn’t exist.] 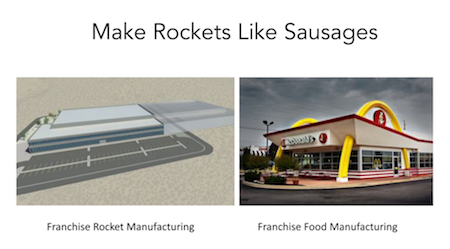 This is a different business model.

We’re building these small little factory modules that can build these rockets. One of my rockets can fit in this room. 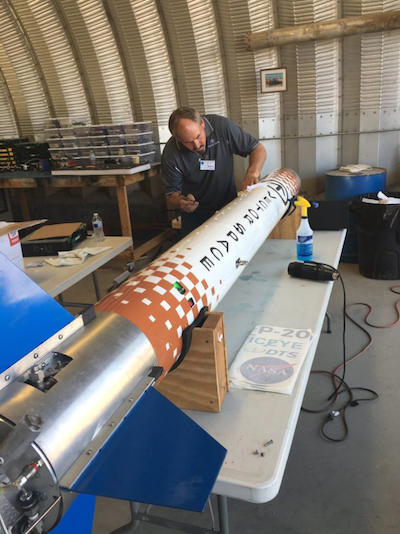 With about ten to twenty thousand square feet, we can have a little plant that makes them and employ about 25 people. And we can produce about 25 a year. 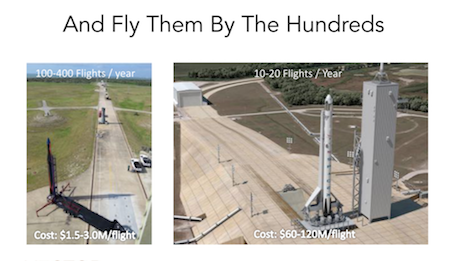 So we’re going to replicate those all over the world. And we’ll be the mother part supplier for them, but they’ll get assembled just like part assembly plants in Mexico for Ford. That’s how we’re going to achieve our numbers.

It’s unlike anything anybody’s done in the aerospace industry. 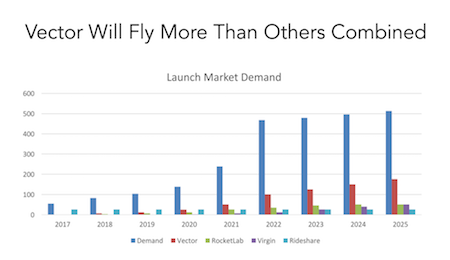 We have about 40 patents on this, but it essentially allows virtual machines in space. And we’re using terrestrial network technology. 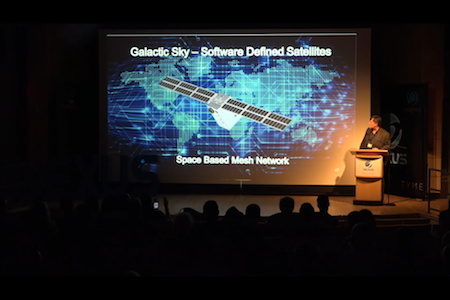 We brought in Silicon Valley DNA that did a lot of early Internet work, a lot of server work. We’re essentially putting a cloud layer in space.

It’s going to be a space-based network the entire world will have access to. And the cost to access it will be within the affordability of most average folks. We’re not talking about something that’s the domain of just the large corporations or the large governments.

If you’re Johnny Law and you want to find people violating the law, you’re welcome, too, I guess.

So this is the vision. And we’re starting to build this constellation out.

ONE. It’s been established that a country’s borders continue beneath the surface all the way to the earth’s core. Above the ground, though, according to the Outer Space Treaty of 1967, boundaries extend only to what is defined as “outer space” — which begins 100 kilometers into the atmosphere. Space is still no-man’s land.

TWO. Interestingly enough, too, a book we’ve mentioned before in the past, The Sovereign Individual, published in 1999, remains fairly prescient:

“Not only will transactions occur over the [Inter]Net, but they will migrate outside the jurisdiction of nation-states. . . . Payment will be rendered in cybercurrency. Profits will be booked in cyberbanks. Investments will be made in cyberbrokerages. . . . Low-orbit satellites and other approaches to wireless technology will transmit feeds back and forth directly to a beeper in your pocket, a portable computer, or a workstation, without interfacing with a local telephone operating or TV cable system at all. In short, the Internet will be unwired. . . . Your PC will be the branch office of your bank and global money brokerage, as well as the equivalent of the Paris kiosk where you buy your anonymous phone card.”]

The Most Famous Human Being

The most famous human being isn’t born yet… This person is going to be the first one born off the Earth.

This will represent the most significant accomplishment of mankind — to move off of this rock that we all live on that we were all born on. And that we have learned enough and built enough to move off of it.

This accomplishment will not be done by governments. It will be done by people like you and me. It’ll be done because we want to do it. Because we think it’s a worthwhile thing. And there’s something inside of us that calls us there.

We will do it.

Cryptocurrency will go there, too. Cryptocurrency has its legs in a lot of other things in how you organize societies and it’s my personal belief that cryptocurrency is a big part of this revolution that’s coming.

And I believe that as we expand privately into space, cryptocurrency is going to be a fundamental part of how that happens.

[Ed. note: This information was adapted from Jim’s talks at Nexus 2017, which you can find here and here.]