Tesla shares slid this morning after the EV company announced plans for a $2 billion common stock offering (just two weeks after Elon Musk said they definitely wouldn’t be doing that sort of thing).

The world’s No. 1 maker of the self-driving douchemobiles said it plans to use the funds from the offering “to further strengthen its balance sheet, as well as for general corporate purposes.” (Like designing the Cyber Truck 2.0 or finally bringing Homer Simpson’s bubble car to market.) 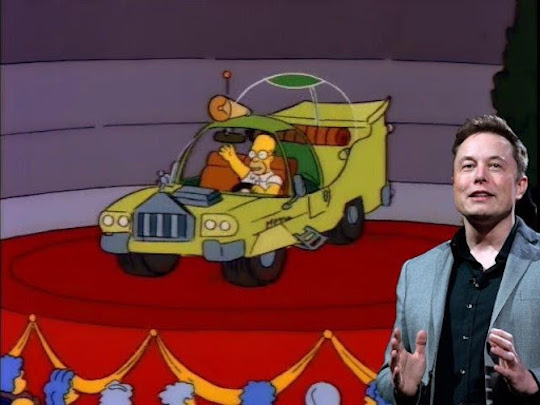 “You want a bubble car that’s real wacky. Not fake wacky like those clowns at Ford or Porsche make.”

The influx of cash should galvanize Tesla against any imminent credit crunch. But typically, releasing new common stock damages share prices and salts the watermelon of current investors.

Going forward, all of Tesla’s earnings will be spread among a greater number of shares, potentially resulting in lower earnings per share. To keep investors on board, Musk & Co. will have to make the case that this cash will be put to good use and generate more capital in the long run.

This might be an easier job if, just two weeks ago, Elon hadn’t told investors he had no intention to raise capital at this time, or possibly ever again. 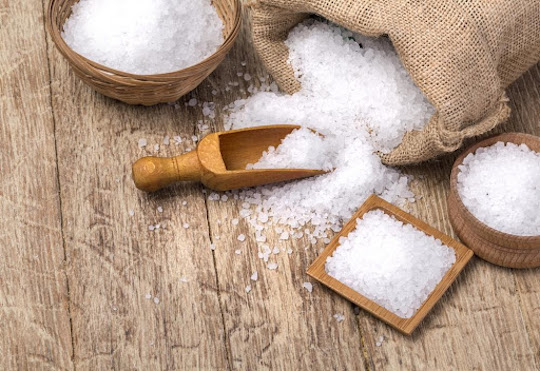 Pictured: The pinch of salt to take with an Elon Musk statement.

“We’re spending money as quickly as we can spend it sensibly,” said Musk on an earnings call to discuss the Q4 report.

“It doesn’t make sense to raise money because we expect to generate cash despite this growth level.”

As part of the offering, the self-proclaimed “Buff Mage”, CEO Elon Musk, will purchase up to $10 million stock, while Tesla board-member Larry Ellison will buy as much as $1 million of common stock.

Shares of Tesla (TSLA) slumped as much as 7% in early trading this morning as skittish investors said “wait, what?” with their wallets.

But according to Brad Plothow, vice president of marketing at Womply and man who definitely forgot Valentine’s Day last year, the Feast of Saint Valentine ain’t so hot.

Last year, while Brad was drinking beer in his undies and wondering why Maureen was giving him the stink eye, Valentine’s night ranked as the 94th best night of the year for restaurants.

Brad, who knows in his heart that Valentine’s Day is a scam but would never say that to Maureen, says that most regular Fridays and Saturdays tend to do better business than Valentines.

Even Cinco De Mayo, which Brad has been meaning to check out but isn’t sure about this whole “drinking out of a hubcap” thing, beat out Valentine’s Day last year, coming in 93rd.

Restaurants will typically see an increase of about 30% to 40% in revenue compared to a regular weekday. But the trappings of the holiday prevent it from competing with your average Saturday, when restaurants generate almost 20% of their weekly revenue.

As Hakan Swahn, owner of Manhattan’s two-Michelin-starred Aquavit, told Bloomberg, the entire restaurant has to be broken up into tables of two which limits how many total patrons they can take in.

At the same time, turnover tends to be a lot slower as couples spend hours gazing longingly into each other’s eyes, desperately trying to rekindle that first spark of passion that’s long since died out.

According to the study, the top-grossing days of the year are the Saturday and Sunday of Mother’s Day weekend (which makes sense to Brad because his mom is the best and doesn’t constantly ask why he spends all his money on model armies).

Fake News vs. Your Financial Well-Being

Based on the headlines this week you’d think we were headed for the end of the world. And not the fun end of the world where we get to wear leather and join street gangs.

The regular end of the world where we’re just not here anymore.

At times like these it’s important to take stock and get a little perspective. (Either that or stock up on gasoline and armor plate a van.)

In today’s One Last Thing, macroeconomist Graham Summers digs into the cold hard facts and pulls back the curtain on all the doom & gloom. (Spoiler alert: There’s just an old man back there, pulling levers and handing out tchotchkes.)

Below is a screenshot of headlines related to the coronavirus from this week. 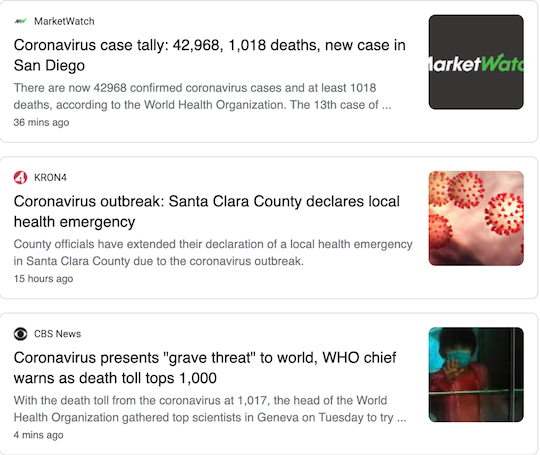 Based on these headlines, you’d think the coronavirus was the beginning of a global pandemic that will soon kill a significant percentage of the world.

The markets – which are fact-based, NOT narrative-based – say otherwise. 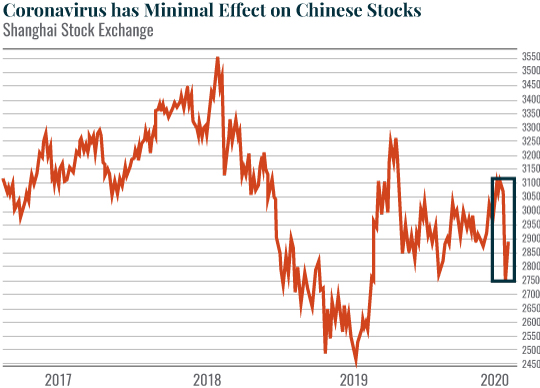 And what about copper?

If global growth is about to collapse as the coronavirus shuts down the economy, surely copper prices would have imploded, right? After all, copper is one of the most economically sensitive commodities in the world!

Again, if you didn’t read the news, would you even know coronavirus was an issue based on this chart? 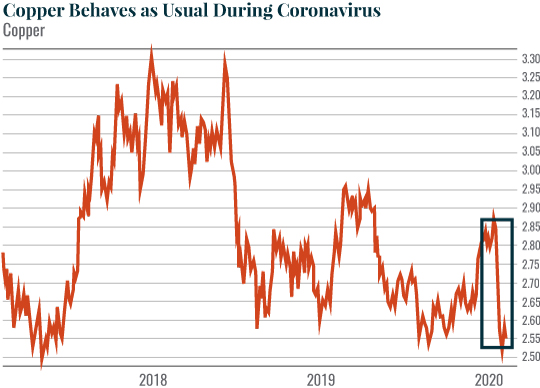 I want to be clear here: I am not making light of the coronavirus. Any time someone loses their life due to an unexpected illness, it’s a great tragedy.

But as usual, the media is going overboard and producing fake news in order to generate traffic to their websites and nightly shows.

Meanwhile, U.S. stocks have already reversed their correction related to coronavirus (dark blue rectangle below) and have soared to new all-time highs. 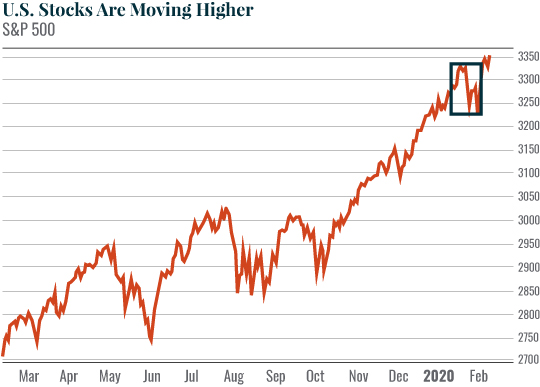 Anyone who sold stocks based on the false narrative of coronavirus has lost money, quite possibly a lot of it.

Fake news is a major problem, both for the country as a whole and for investors in particular. No matter how smart you are, if you base your investment decisions on bad reporting…

This is why I prefer to always look at how the market is reacting to “breaking stories.” Stocks don’t care about political leanings or false narratives. Stocks are a discounting mechanism of what is actually happening. And as such, their reporting is a lot closer to reality than much of the journalists who write for major outlets today.