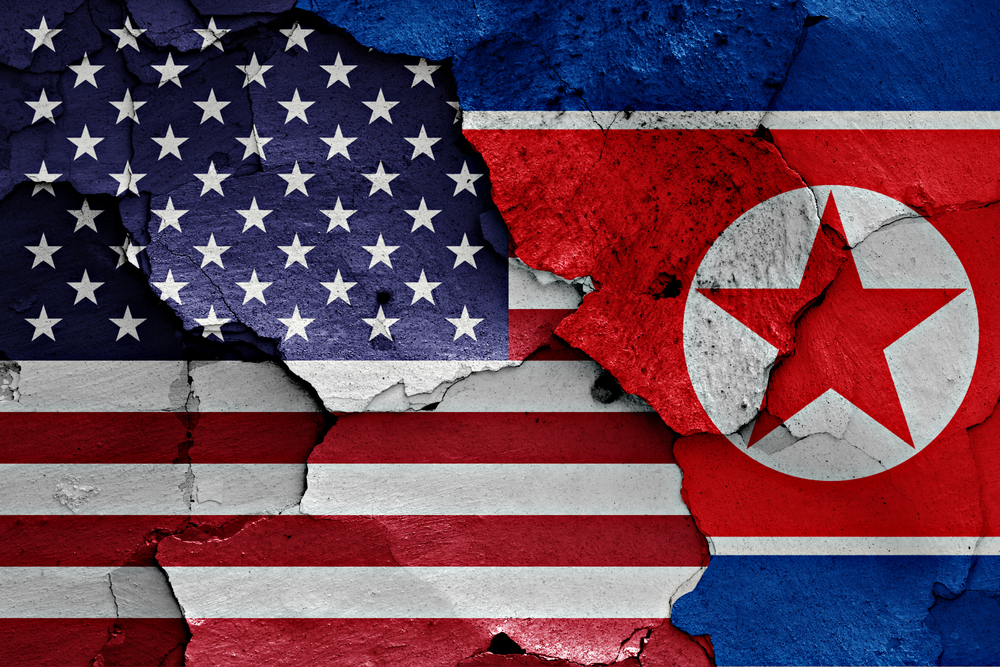 U.S. and North Korea on the Path to War?

[Editor’s Note: Today’s edition comes to you from Jim Rickards, one of the world’s foremost experts on crisis investing. He’s the author of two best-selling books on the subject… and was one of the few people who correctly predicted the 2008 financial crisis. You can claim a FREE copy of his new book The Road to Ruin: The Global Elites’ Secret Plan for the Next Financial Crisis right here.]

The news from the White House on March 8, 2018 stunned the world.

First a visiting envoy from South Korea informed the press gathered just outside the entrance to the West Wing that North Korean dictator, Kim Jong Un, was willing to meet with President Trump to discuss denuclearization of the Korean Peninsula.

Kim also reportedly said that he was willing to halt his own testing of missiles and nuclear weapons pending the outcome of negotiations, and that he understood the U.S. and South Korea might continue military exercises in the meantime.

Within a few hours, Trump met with the press to repeat the offer from Kim that the South Koreans had relayed to him, and to say that he accepted the offer to meet face-to-face with Kim.

This would be the first meeting of a sitting president with a leader of North Korea in history. The meeting was expected to take place by May although no firm date had been set.

Despite the surprise nature of the announcement, analysts were quick to point out that the meeting should not have come as a complete shock.

North Korea has repeatedly expressed a desire to meet with the U.S. However, that desire was always coupled with conditions the U.S. found unacceptable. Suddenly those conditions were being dropped.

Similarly, Trump has said publicly that he would be willing to meet with Kim under the right circumstances despite an exchange of insults in which Trump called Kim, “Little Rocket Man,” and Kim referred to Trump as a “dotard.”

Now all of that seemed to be in the rearview mirror as efforts to organize a summit got underway.

There’s a lot of drama surrounding the president’s decision-making process, whether the right officials were in the loop, and whether Trump made a mistake by conferring legitimacy on a murderous dictator.

It’s also ironic to watch critics of the president who recently called him a “warmonger” now suddenly saying he was being “played” by Kim because he opened the door to peace talks.

Those critics can’t have it both ways. In a critical situation such as the U.S.-North Korean relationship, you’re either on a path to war or a path to peace.

If you believe the path to war has unacceptable risks, then you have to applaud the path to peace that Trump is now pursuing even if you’re not a Trump supporter.

That said, there are still some big questions up in the air.

Will the summit meeting actually happen?

There is considerable doubt about this. In the first instance, Kim did not announce the invitation himself. It was relayed by South Korean envoys following a meeting in North Korea between Kim and South Korean President Moon.

Since the offer and Trump’s response were announced there has been no comment from Kim or North Korean media.

Was something lost in translation? Did Trump’s acceptance take the North Koreans by surprise? Has Kim changed his mind and is hanging the South Koreans out to dry? So far, we don’t know.

Even if Kim confirms the invitation, there are countless hurdles in the way of a meeting. Two months is a very short timeline for both sides to prepare their opening negotiating positions, their real bottom line positions, and the red lines where they walk away from the table.

Not only do those positions have to be solidified, but they have to be gamed-out in a point-counterpoint fashion with estimated response functions. All of this preparation has to be informed with the best possible intelligence collections.

A process of this complexity would normally take more like six months rather than two, so we should not expect an actual summit until late summer at the earliest.

Where will the summit be held?

Then there are logistical hurdles independent of the substance of the talks. Obviously it won’t be in North or South Korea proper.

It might take place in the two-mile wide demilitarized zone, DMZ, between North and South Korea in one of two “peace villages” located there. However, each peace village is technically in North Korea or South Korea respectively.

There is also a “truce village” called the Joint Security Area, JSA, in the DMZ, which is technically under United Nations control and where North and South Korea have held negotiations in the past. However, facilities there are Spartan and it would be impossible to ensure the president’s security and safety.

Beijing would be unacceptable to North Korea because they do not want to appear to be under China’s thumb. Japan is unacceptable to all parties because of historical animus between Korea and Japan.

Russia is a logical place to hold the meeting, and Vladimir Putin would make an eager host. The modern city of Vladivostok, Russia is less than a 100-mile train ride from the North Korean border with Russia. (The Kim family have a well-known aversion to flying and prefer to travel by train whenever possible.)

Of course, a meeting in Russia hosted by Putin would inflame Trump’s critics who claim he’s secretly in thrall to his Russian masters. So, Russia is probably out as a venue also.

In short, there may be no good place to hold the meeting. If one can be found, it may take months to identify, agree, and sort the logistics, so that’s another impediment to anything happening soon.

If the summit happens, what is the expected outcome?

The answer to this question could fill a book, but here’s the short answer – nothing.

What this means in practical terms is the reunification of the two Koreas on terms which perpetuate the Kim regime and expulsion of U.S. influence from the region.

All parties might agree that reunification is desirable, but not in a way that subordinates South Korea to the Kim dynasty. And elimination of U.S. influence from the region is a non-starter for South Korea, the U.S., and Japan.

In other words, the parties have irreconcilable goals. This should be apparent to all concerned.

If that’s true, what’s the point of a summit meeting? In Kim’s case the cost is low.

He can continue developing his nuclear missile program even without launches and detonations while the talks continue. His concession on U.S. military exercises in the meantime also costs nothing because the U.S. was certain to conduct those exercises anyway.

Kim might hope that the U.S. or China will ease up on sanctions enforcement while talks continue. If that happens, it’s a pure win for Kim.

From the U.S. perspective, Trump may be overestimating his negotiating skills. Trump is not a seasoned international negotiator like Nixon or Kissinger, and Kim is not a New York real estate developer.

Trump can at least ensure the U.S. does not give away anything significant. Despite technical progress, it’s unlikely that North Korea can acquire a nuclear-armed ICBM arsenal that threatens the U.S. without resuming tests. Trump will certainly win some political points for his willingness even to meet with Kim.

In short, both sides have almost nothing to lose and perhaps a little to gain from the talks. That’s a reason to go forward, but it’s not a reason to expect a breakthrough.

Both sides win some kudos and buy some time. Still, expectations should be quite low that any material progress will emerge.

If the summit does not happen, are we back on the path to war?

If the summit does not happen, or if it takes place with inconclusive results, then the U.S. and North Korea will be back on the path to war.

The likelihood of war rests on two simple and irreconcilable positions. North Korea wants a nuclear-armed ICBM arsenal to insure the Kim regime’s perpetuation in power.

The U.S. will not permit North Korea to obtain such an arsenal because it poses an existential threat to U.S. civilization.

There’s no middle ground in those two positions.

As of early December 2017, the U.S. and North Korea were on a path to war, probably within a matter of months. It was then that an informal “freeze-for-freeze” emerged.

But the U.S. would not agree to both because it refused to negotiate with North Korea with preconditions and it did not want North Korea to dictate the tempo of U.S. military exercises.

However, an informal freeze-for-freeze emerged anyway because of South Korea’s request that both sides refrain from provocative acts during the Winter Olympics held in February in South Korea.

The U.S. silently agreed to this with no loss of face. North Korea also stopped firing missiles after late November. The North’s last nuclear detonation was in September 2017.

A freeze-for-freeze happened without any formalities or any overt declarations by either side. This effectively stopped the clock on the path to war and pushed back the timeline.

Yet, if the peace talks produce nothing, which is what we expect, then the countdown clock starts ticking again and both sides are back on the path to war later this year.

By then, Kim would have made technical strides in guidance systems and warhead engineering and miniaturization even without missile tests or detonations.

From there he could move to “breakout” mode where he resumes testing in an effort to validate and perfect his new technologies in a matter of a few months or less.

At that point, the U.S. will go to war to stop him.

We should pray for the best possible outcome. But, we should prepare for the worst.

Editor’s Note: For more of Jim’s expert analysis and advice, claim your FREE copy of his new book The Road to Ruin: The Global Elites’ Secret Plan for the Next Financial Crisis. This shocking account of the next financial crisis reveals one of the biggest threats to your wealth today… and shows you the simple steps you can take to protect your money and your family. Get your FREE copy now.

James G. Rickards is an American lawyer, economist, and investment banker with 35 years of experience working in capital markets on Wall Street. He is a writer and is a regular commentator on finance. Rickards advised clients of an impending financial collapse, of a decline in the dollar and a sharp rise in the price of gold, all years in advance. Rickards is the author of The New York Times bestseller Currency Wars, published in 2011.