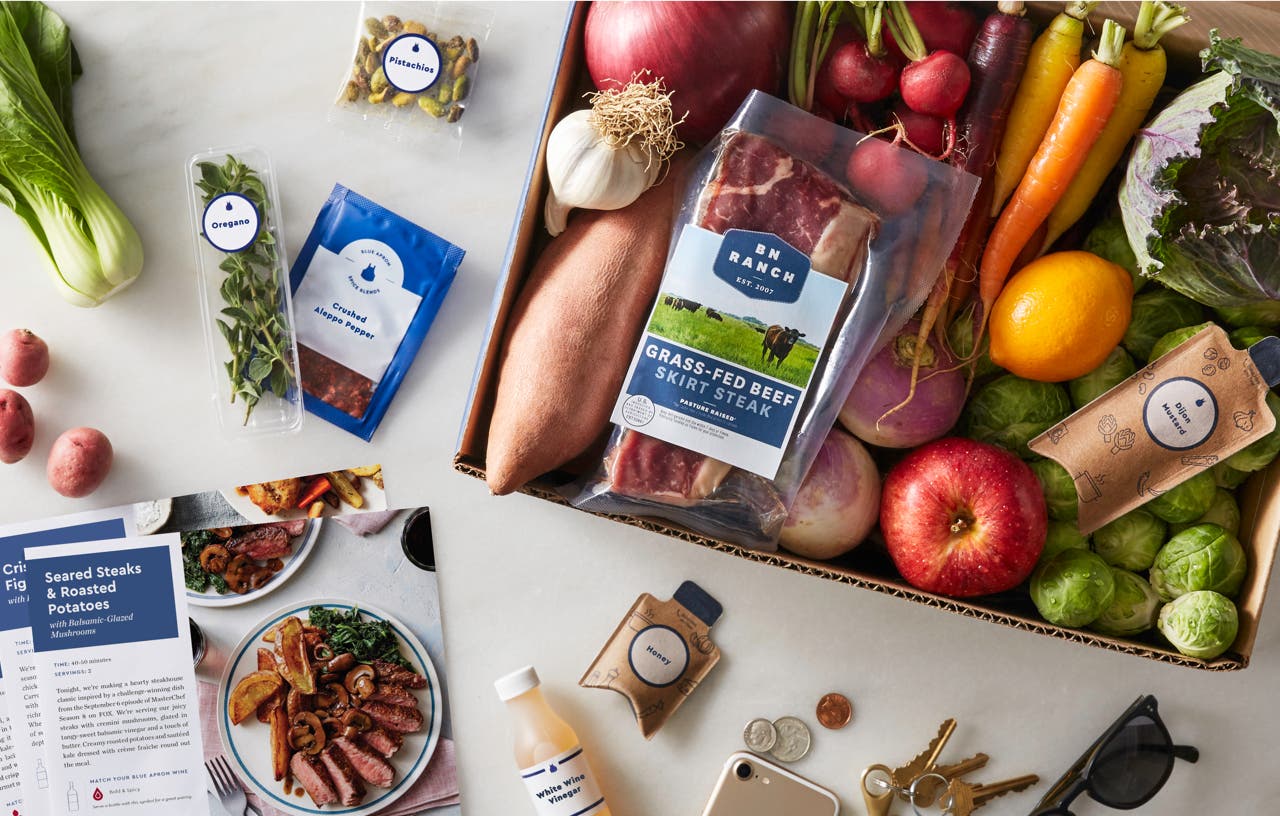 An Unlikely Underdog Becomes the Hottest Stock in the World

Remember that meal-kit delivery service you made fun of in high school?

Well this is them now: 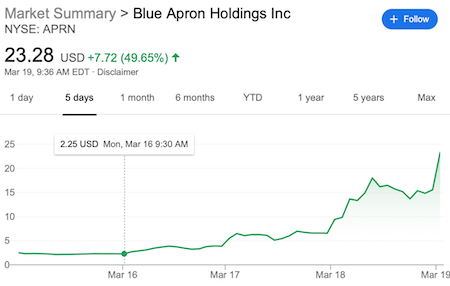 Be careful who you make fun of. (Source: Google Finance)

As the United States struggles to come to terms with life indoors, the stock market is doing its best impression of Homer Simpson falling down a mountain.

The Dow has dipped below 20,000 points, giving up almost all of the gains it made since President Trump’s 2016 election. And yet, even in the darkest of times, there will always be one lucky sod who stands to benefit from everyone else’s misery. (You know the guy who made those “bring out your dead” carts made a killing during the Black Plague.)

In the age of COVID-19, that lucky sod is Blue Apron. In the last week alone, shares of the meal-kit delivery company (APRN) surged more than 600%.

Markets were falling fast and hard yesterday, enough to, once again, trigger the emergency market circuit breakers designed to halt panic selling (for all the good they’re doing). Meanwhile the little stock that could was banking gains of 143%, its largest single session gain since its IPO in 2017.

Blue Apron and rival Hello Fresh are uniquely positioned to benefit from the social distancing and self-quarantining employed to slow the spread of virus. (And I’m sure the quarantine self-improvement fad isn’t hurting either. I’m glad you’re learning French, Daisy, but I don’t need hourly updates.)

Restaurants and bars closed. Folks are terrified to visit the grocery store for fear of catching the virus. And when you get there, most of the shelves are empty because some a-hole thinks they need 13 jars of artichoke hearts in a pandemic. (You will never eat that many artichokes, Jeff.)

These meal kit delivery companies deliver fresh produce to your house, along with simplified directions for cooking, so even an idiot like my neighbor Jeff can do it. And because your order online and the box is left on your doorstep, there is zero face-to-face contact involved (you can thank millennials’ crippling social anxiety for that).

I don’t think anyone at Blue Apron expected to be the hottest stock in the world this morning. But, despite its potential to make a killing, it’s not like the company has magically become a bippity-boppity-better-run business.

The story of Blue Apron’s 2017 IPO is one we know all too well by now: a red-hot startup riding a tsunami of hype comes crashing down to reality when it has to reveal its shoddy financials. (And I make jokes.)

At one point, the value of Blue Apron’s shares had declined so much, they had to execute a 1-for-15 reverse split. I know that sounds like a sex move invented by a pro bowler. But it effectively turned every 15 shares of Blue Apron into one share with a higher value.

Even today, after its unprecedented surge, Blue Apron is worth just $211 million, down from $1.9 billion when it went public in 2017.

The company has been struggling to balance keeping costs low, retaining customers, and staying competitive. The coronavirus outbreak will a likely give Blue Apron a temporary boost in members and revenue. But the real test will be if it can retain a meaningful share of that influx post pandemic.

The Trump Job Streak Grinds to a Halt

Usually when we talk about jobs here, I like to spice things up with some fanfare and good old fashioned razzle dazzle.

Data, even vital world-changing data, can be boring. So why not spice things up by throwing in some electric guitars, high-wire stunts, and epic fireworks? (We probably spend more on fireworks here than any other newsletter.)

Well I ain’t doing any of that today. (Well ok, maybe a little firework as a coronavirus quarantine treat. Peeeeeew, fizzle, pop.)

Weekly jobless claims surged to their highest level since 2017 this week, as companies around the country kicked off the coronavirus-related layoffs.

Claims surged to 281,000 from 211,000 the week previous, according to the Labor Department. (And I just bought a stuffed unicorn to sit on while I report this months’ job report.)

“The increase in initial claims are clearly attributable to impacts from the COVID-19 virus,” said the labor department in its report, just under a brightly colored graphic that just says “DUH.”

“A number of states specifically cited COVID-19 related layoffs, while many states reported increased layoffs in service related industries broadly and in the accommodation and food services industries specifically, as well as in the transportation and warehousing industry, whether COVID-19 was identified directly or not.”

The surge in jobless claims is significant. But this is only the tip of the iceberg. The U.S. only really started taking the rona seriously this week. And major companies are only now announcing coronavirus layoffs.

Marriott International, to name just one, will be adding tens of thousands of former employees to that list, with a massive culling of it labor force.

“Next week’s number … will be an order of magnitude worse,” said Shepherdson. “We hope that will be the single worst week, but we can’t be sure.”

The Fed’s Next Step Could Break All the Rules

The Fed has blasted this crisis with every weapon in its arsenal but that monster keeps on coming.

At this point, conventional wisdom says that there’s not much more the Fed can do. But macroeconomist Graham Summers says there’s one last drastic measure the Fed can take.

What a crazy turn of events!

Thus far in this crisis, the Fed has:

Under any set of circumstances, the above set of policies would be considered the NUCLEAR option. The fact that the Fed has launched ALL of these in the span of three weeks is beyond incredible.

In the simplest of terms, the Fed has effectively used up ALL of its ammo in less than a single month. At this point, there is not much else the Fed can do.

And yet, the markets continue to implode.

The Fed is Going to Monetize EVERYTHING

As I write this, the futures markets are once again LIMIT down, meaning they had to be frozen after falling 5%.

In an opinion editorial piece in the Financial Times yesterday morning, the two former Fed Chairs urged the Fed to begin buying corporate debt and stocks.

Currently, the Fed is forbidden from buying either asset as per the Federal Reserve Act. As such, Congress would need to authorize the Fed to start buying these assets.

The two former Fed Chairs are providing the political cover to do this. I fully expect the Fed to begin outright buying stocks, corporate debt, and other assets within the next six weeks.

Put another way, the Fed is going to begin doing what some call “Weimar-Lite” – or effectively buying everything.

This is why bonds are dropping across the board, despite the clear signs that the financial system remains under MAJOR duress…

Bonds realize that the Fed and other central banks are going to opt for INFLATION to stop the crisis (and I’m not talking about the plain vanilla 2% per year kind).

The time to start preparing for this is now.

P.S. Like I said, the Fed is going to need to take DRASTIC measures to have any real impact on the current market. Meaning now’s the prime opportunity for my “Ghost Money” strategy. This strategy is able to help spot what I believe are central market moves – giving you the chance to be among the 1% that have the opportunity to get in on these types of trades. In fact, just yesterday my Ghost Money readers locked in a 35% gain in under an hour. Click here to see how to become part of the 1%.