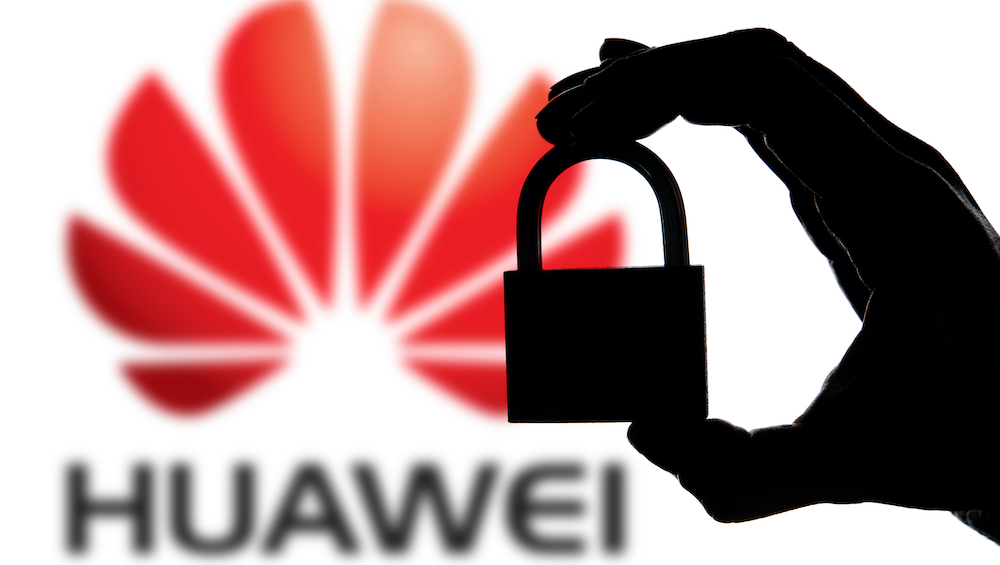 The UK approved the use of Huawei technology in Britain’s 5G networks, despite warnings from U.S. intelligence, an independent British watchdog, and a regular dog who can’t read but knows what’s up.

The UK National Security Council gave the Chinese company the green light to roll out its next generation of wireless tech to the UK this morning, but put some limits in place to restrict the amount of damage they can do.

For now, Huawei’s potential share of the market will be capped at 35% and the company’s equipment will be excluded from the network “core.” (Which, if Star Trek has taught me anything, is the most important part. But we can always eject it into space if anything goes wrong.)

“The government is certain that these measures, taken together, will allow us to mitigate the potential risk posed by the supply chain and to combat the range of threats, whether cyber criminals, or state sponsored attacks,” said the National Cyber Security Centre (NCSC) in a statement.

This decision is unsurprising. A post-Brexit Britain, desperate to stay relevant and keep costs low, was a prime target for Huawei. But this is an awkward time for Boris Johnson to climb into bed with Chinese interests.

After Brexit (which is happening this week, now that I think of it), Britain was counting on its special “friends with benefits” relationship with the U.S. to help it weather the storm.

At best, this decision puts Britain on the back foot as it enters trade negotiations with the U.S. At worst, it’s upended the biscuit tin entirely.

U.S. officials have repeatedly warned the UK (and anyone who will listen) that allowing Huawei to set up your internet is like paying burglars to install your door locks (to be fair, I only did that once and their rates were just too competitive to pass up).

The primary concern is that Huawei’s equipment, while very affordable, could be used by Beijing as a “backdoor” to spy on sensitive government communications and millions of calls to British mummies.

Back in the 2015, Chinese spies abused backdoors in Chinese hardware to hack into almost 30 American companies, including Google and Amazon. The compromised hardware was found in Department of Defense data centers, the CIA’s drone operations, and the onboard networks of Navy warships.

Huawei in particular is a worrying case because of its suspiciously rapid rise to prominence, seemingly endless resources, and, oh yeah, nobody knows who owns this global telecommunications company. (Huawei says that it’s owned by its employees but has never been able to produce definitive proof of that buck wild claim.)

All this leads folks to speculate that Huawei is controlled, owned, and run by none other than (*rips off the lighthouse keeper’s rubber mask*) OLD MAN COMMUNIST PARTY OF CHINA.

But hey, a bargain is a bargain. Right folks? 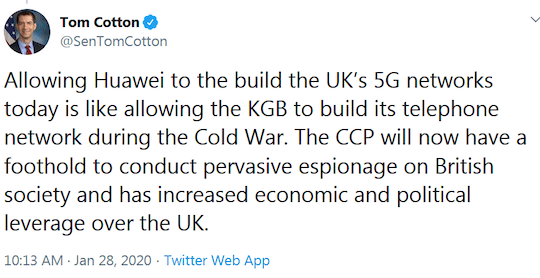 Sen. Tom Cotton (R-AR) made headlines across the pond with some hot takes on the Huawei deal.

There May Be 10 Times More Coronavirus Cases Than Reported

Cases of the Chinese coronavirus could be almost 10 times the official numbers, according to research by the University of Hong Kong.

[Editor’s note: Before we go on, I want to recognize that it seems like there’s a lot anti-Chinese sentiment in this issue. Before it gets all Sinophobic up in here, I should say that Chinese folks are cool. Their government, however, is most definitely not cool. Also, you got to stop selling live koalas in the deli section, guys. That’s how you get coronaviruses. OK, back to the story.]

Academics from the University of Hong Kong said yesterday that the number of patients in Wuhan with the virus had reached 43,590 by Saturday, including those in the incubation stage of the virus. And based on their mathematical model, that number will double in 6.2 days. 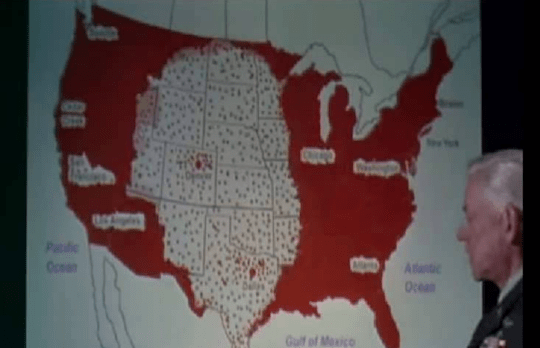 We are officially at that scene in 90s movies when a scientist shows the president a map of the United States getting progressively redder and he takes off his glasses and says, “Dear God.”

As of this morning, Chinese authorities peg the official number at about 4,700 cases. I’ve never been great with numbers, but that seems a tad bit lower than 44,000.

“I think we are dramatically underestimating [coronavirus cases] by tens of thousands,” said Gottlieb. “I think the Chinese haven’t been fully sharing.”

China has been accused of withholding information during the 2003 SARS epidemic. But it says its handling of this particular garbage fire will be different.

Last week, the Communist Party warned that “whoever deliberately delays and conceals reports will forever be nailed to history’s pillar of shame.” (Say what you will about the Party’s politics, but you have to admire their commitment to squeezing every drop of trashy drama out of their public statements.)

US Regulators Move to Ban Shkreli from Pharma for Life

[Editor’s note: Unlike every lazy journo on the beat, we won’t be referring to Shkreli as a “Pharma Bro” in this article. You deserve better than that. *Sound of dust being blown off of thesaurus.*]

The Drug Dude, who’s currently in Pennsylvania chilling in a 6×8 cell, is serving time for securities fraud. But he’s probably best known as the Medicine Amigo who engineered a 56 times price hike on a lifesaving medicine (or the idiot who spent $2 million on a single copy of a Wu-Tang Clan album, depending on the circles you travel in).

The lawsuit, which seeks to ban this… Tonic Comrade… from the industry for life, centers on the actions Shkreli and his company took to block potential competitors from making a replacement drug.

“[Shkreli and his company] held this critical drug hostage from patients and competitors as they illegally sought to maintain their monopoly,” said Attorney General Letitia James in a statement.

“We won’t allow ‘Pharma Bros’ to manipulate the market and line their pockets at the expense of vulnerable patients and the health care system.”

The Serum Chum (look there aren’t as many alternatives to pharma Bro as I thought) and his company are accused of maneuvering to cut off rival’s access to a key ingredient in the medication, preventing a cheaper generic version from being made.

“Daraprim is a life-saving drug for vulnerable patients,” said Gail Levine, deputy director of the Bureau of Competition at the FTC. “Vyera kept the price of Darapim astronomically high by illegally boxing out the competition.”

The suit is seeking financial relief and penalties, plus an order barring the Therapeutics Homie from owning or working for any pharma company for life. 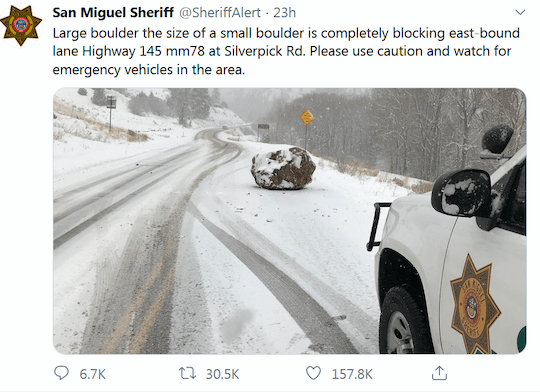 This is either a very small large boulder, or a very large small boulder.

Latency arbitrage is when traders use ultra-fast trading computers programmed to automatically react to market-moving information (like the release of economic data or Elon Musk smoking weed) in millionths of a second.

This allows these traders to buy and sell before any human (or regular dumb robot) has a chance to react. According to the report, more than 80% of races to buy FTSE 100 stocks in 2018 were won by the same half-dozen high-frequency trading firms.

Which is mighty swell for those folks. But according to this report, these quickdraw traders raise costs for all investors.

The FCA compares the runoff from latency arbitrage to a “tax” on all investments amounting to 0.0042% of daily stock-trading volume (based on two months of activity on the London Stock Exchange).

Now, nobody ever went broke over 0.0042%. But spread across the majestic undulating expanse of the global markets that amounts to $4.8 billion annually. And that significantly increases the trading costs of large investors.

“The latency arbitrage tax does seem small enough that ordinary households need not worry about it in the context of their retirement and savings decisions,” writes the study’s authors.

“Yet at the same time, flawed market design significantly increases the trading costs of large investors, and generates billions of dollars a year in profits for a small number of HFT firms and other parties in the speed race, who then have significant incentive to preserve the status quo.”