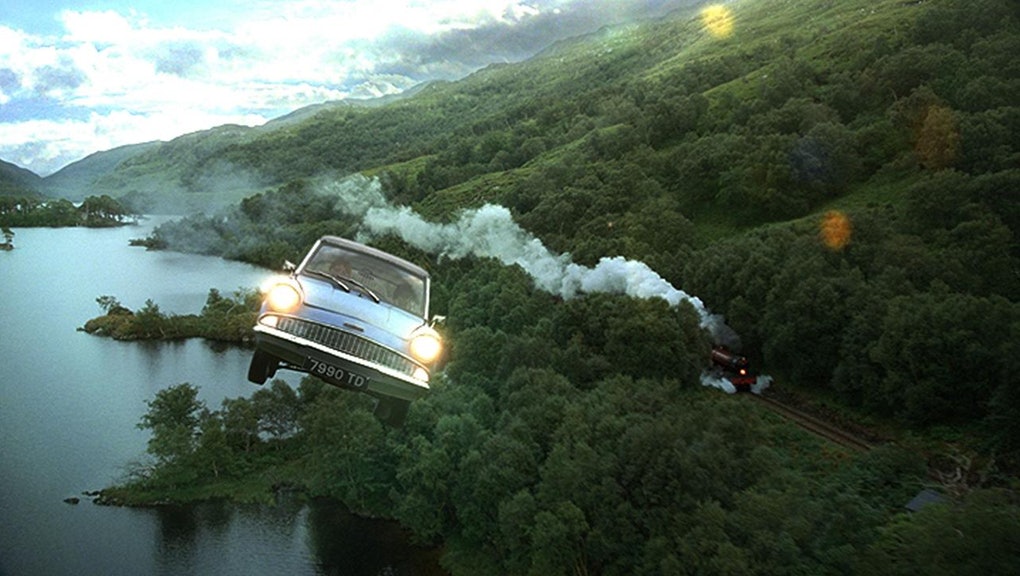 Facebook says it will no longer host certain “deepfake” videos as part of a campaign to clamp down on misleading content before the entire country implodes this November.

A deepfake (for those of you leading a peaceful existence outside of the hellish landscape of the modern 24-hour news cycle) is any video altered to show something that didn’t happen.

These little “snippets of untruth” can be as low-tech as making small, barely noticeable edits with home video software; or as high-tech as a state-of-the-art AI digitally putting new words into your mouth and syncing your lips and facial features to match.

You’ve probably seen the altered videos of Nancy Pelosi slurring her words, President Trump taunting Belgium about the Paris climate agreement, or the one where Steve Buscemi has a slamming hot lady bod.

These are all examples of deepfakes (though I have never seen any proof that Buscemi doesn’t have a slamming hot lady bod). And while the tech is still in its early days, it’s not hard to imagine how a technology that can make the president say anything could be abused to spread disinformation.

(What if a North Korean hacker released a video of Trump saying Chicago-style pizza was better than an NYC slice? Chaos.)

In fact, Ben Cunningham, a former engineering lead at Facebook, predicts 2020 will be the year a mainstream video editing app will launch, giving the power to create convincing video fakes to anyone with a smartphone.

At first, Zuckerberg was largely unconcerned by the rise of these deepfakes, mostly filing them under “neat free speech stuff.” But the Zuckmeister changed his tune in June of last year, after a deepfake circulated of the Facebook founder advocating for user privacy (which he would never do, of course). 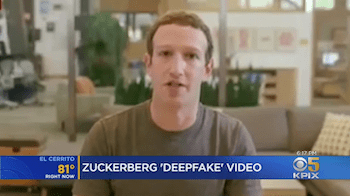 Zuckerberg’s dead, expressionless face makes him easier to deepfake than most.

After the eighth-richest person in the world had his feelings hurt, he announced that it was finally time to do something about all these deepfakes (at some point… later… we’ll get to it… doing Facebook is haaaaaard).

In a statement made in June, Zuckerberg stressed that marshaling content on the platform was a delicate state of affairs and it was absolutely vital that Facebook establishes a concrete policy on dealing with deepfakes before moving on the issue.

So after seven months of dedicated research and deliberation, what did the geniuses on Facebook’s policy team come up with?

“It has been edited or synthesized – beyond adjustments for clarity or quality – in ways that aren’t apparent to an average person and would likely mislead someone into thinking that a subject of the video said words that they did not actually say. And:

“It is the product of artificial intelligence or machine learning that merges, replaces or superimposes content onto a video, making it appear to be authentic.”

Basically: “If it look real and people think it real, then it bad.”

The exception to the rule will be content that is clearly understood to be satire or parody.

Which puts Facebook (a website originally created to rank the attractiveness of women at Mark Zuckerberg’s college) in the uncomfortable position of becoming the arbiter for what is and isn’t satire and, once again, marshaling free speech online.

Made for Idiots: The clumsy “Made from Plants” chaser in the branding is an attempt to stave off hysterical meat lobbyists who argue dumb consumers will buy fake meat by accident.

Both Impossible Foods and its rival Beyond Meat have had enormous success with their ranges of frankenbeef. But as the No. 1 most consumed meat in the world (and the No. 1 meat consumed by me), pork represents an enormous untapped opportunity for these crunchy science dudes. 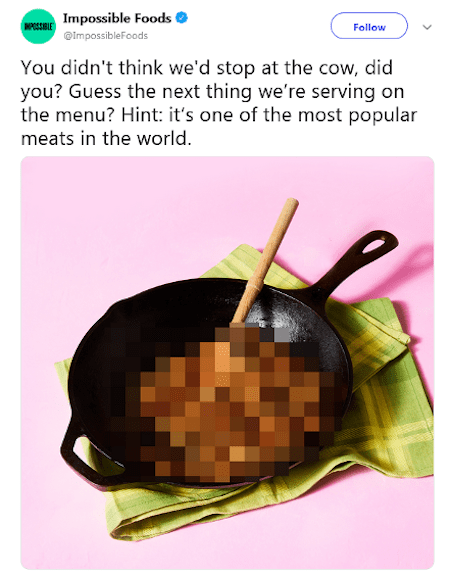 The new trend in 2020 is to market your product like a cannibal serial killer.

Before the event, Impossible’s Chief Executive Pat Brown told MarketWatch that pretend pork is “a natural follow-up” to the success of the Impossible Burger but consumers should expect to see plant-based abominations for lamb, goat, fish, and dairy products in the near future.

“What we’re working on is the most significant science project and business endeavor in the world,” Brown told MarketWatch, pulling out his horn and giving it a big old toot.

After Beyond Meat’s blockbuster IPO last year, investors have been as thirsty as a vicar on Tinder for news of an Impossible Foods followup.

For now, Brown is downplaying the possibility of a 2020 IPO, instead maintaining that the focus for Impossible Foods this year is ramping up R&D. Over the next 15 years, Brown says, Impossible intends to double its food supply every year.

That might sound like fake-meat-pie-in-the-sky thinking but a recent IDTechEx report on frankenmeat projects the global market for “novel meat substitutes” to top $30 billion by 2030.

Impossible has yet to announce plans to sell its ground pork product but the Impossible Sausage Made from Plants will debut in late January at 139 Burger King restaurants in five test regions: Savannah, Georgia; Lansing, Michigan; Springfield, Illinois; Albuquerque, New Mexico; and Montgomery, Alabama. 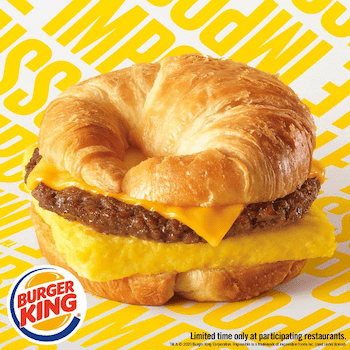 Georges Auguste Escoffier, the inventor of French cuisine, is somersaulting in his grave right now.

As the proxy for all things fake meat on the stock market, the share price of Beyond Meat (BYND) was buoyed by Impossible’s announcement, surging almost 8%.

Hyundai announced a surprise partnership with Uber yesterday, aimed at developing a network of flying taxis that could be crashing into buildings as soon as 2023.

The South Korean motor company, probably best known for making cars that stay on the ground, announced it was developing a flying car about six months ago. Not much was made of the announcement at the time because, well, lots of folks have tried (and failed) to make flying cars a thing before.

Despite some big innovations made in the last decade, these flying death traps always end up too expensive, too much of a regulatory nightmare, and too dangerous to hand over to your average consumer.

(I don’t know about you but I don’t think I could stomach the idea of my idiot neighbor having a personal airplane. Guy can’t back out of the driveway without taking out the trash cans.)

This partnership with Uber, which was announced at CES in Las Vegas yesterday, unlocks a potential commercial avenue that sidesteps many of these issues.

The taxi service will be run out of flight hubs, keeping taxis in a defined airspace. And the only people operating them will be Uber employees, keeping my neighbor from backing his flying Hyundai into my bedroom window at three in the morning. 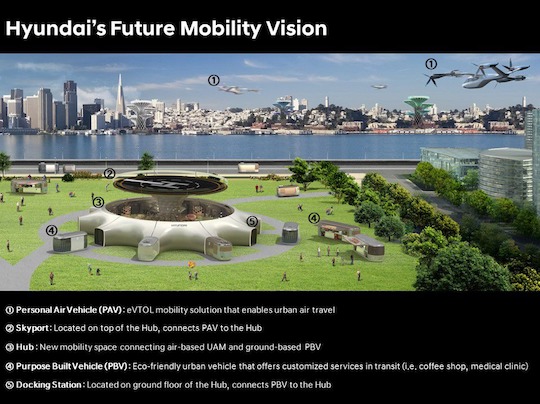 Never has the future looked so much like a video game from 20 years ago.

Hyundai’s “vision for the future of mobility” includes little pill-shaped trams to ferry people to and from the flight hubs which I’m pretty sure are just buses. I think Hyundai invented a park-and-ride bus system with extra steps.

According to Hyundai, the aerial taxis will be able to take off and land vertically, accommodate four passengers, and cruise at up to 200 miles per hour. But if you were hoping for the gritty cyberpunk flying cars of Blade Runner, then you’re fresh out of luck.

It’s kinda like a package delivery drone but for people.

Uber says it would like to demo the flying egg before the end of 2020 and hopefully start rolling service to demo markets as soon as 2023.

The price per share of Uber’s stock (UBER) rose 2.7% this morning, as investors dared to hope that a glimmer of innovation might yet be in Uber’s future.

The fifth generation of wireless networks, said to be up to 100 times faster than today’s 4G networks.

We’ve had our finger on this sticky little pulse since it was just a twinkle in 4G’s eye.

5G tech, which optimizes devices to give more users faster internet, is predicted to catalyze a tsunami of innovations across multiple sectors, driving a $1.9 trillion surge in economic output.

We just don’t know when it’s going to be a thing.

2019 was supposed to be the year of 5G. (I know because I have it penciled into my day planner. Right next to the best season of Game of Thrones ever… oh.)

Unfortunately, some of the biggest players in the industry got cold feet and delayed rollout. And those that made it to market first didn’t fare any better, with slow, limited service that only worked if you were standing directly under a 5G tower.

But this year is shaping up to be different.

The groundwork has been laid, the infrastructure is improving, the hype machine is rearing to go, and there are actually phones on the market capable of receiving 5G.

We expect 5G to start to take off this year. And when it does, it will trigger an avalanche of innovations in augmented reality, mission-critical services, fixed wireless access, and the massive internet of things.

And all these developments will just so happen to need billions of dollars’ worth of semiconductors to implement.

Semiconductors, a key component in the microchips in all these products, got absolutely hammered in 2019. As the global smartphone business receded, the market for semiconductors shrank.

Even so, over the past 12 months through Monday, the PHLX Semiconductor Index climbed 57.3% compared to the broader S&P 500 which advanced just 27.3%.

The industry expects smartphone sales to return to normal this year. That alone will boost demand for semiconductors. But the deployment of 5G is predicted to bring renewed growth to the wireless industry.

“Throughout the history of the semiconductor industry, every market downturn has ended with the arrival of a technical innovation that spurred a major increase in demand,” said Len Jelinek, for IHS Markit Technology.

“In the past, these innovations have had momentous impacts, such as the advent of the world wide web or the introduction of the iPhone. Now another historic innovation is set will take its place among these advances: 5G.

“However, 5G’s impact will spread far beyond the confines of the tech industry, impacting every aspect of society and driving new economic activity that will spur rising demand for microchips.”

According to IHS Markit Technology, global revenue for semiconductors will rise 18% to $448 billion next year, up from $422.8 billion in 2019. And the companies positioned to take advantage of that boom and meet demand are going to do mighty fine for themselves.

Note: As we were prepping One Last Thing to send, shares of Microchip Technology Inc. (MCHP) surged more than 6.4% after the semiconductor company raised its fiscal third-quarter revenue outlook for the second time in a month.