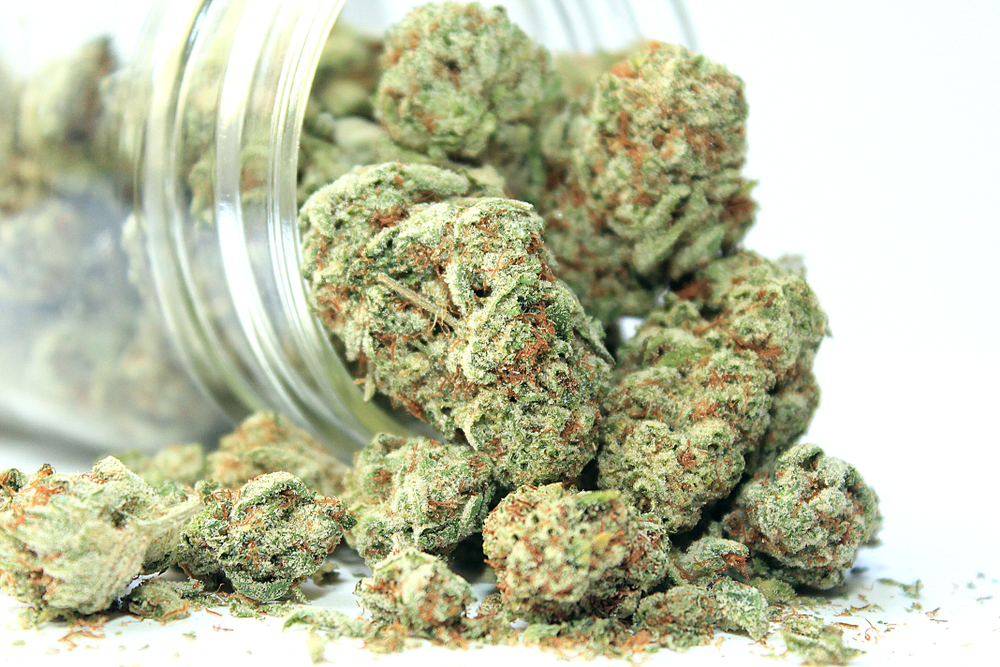 CEO Calls it a Story-Telling Problem

Rideshare app and company-that-desperately-needs-robot-cars-to-be-real Uber is bleeding cash like a struck piggy bank. (Y’all remember that scene where they kill the piggy bank in CEO of the Flies? It’s just like that.)

Uber’s shares (UBER) plummeted in the extended trading session yesterday after the company announced its largest quarterly loss ever.

In the last three months alone, Uber managed to bank a loss of $5.24 billion. (Roughly about the GDP of the entire island nation of Barbados. Which I hear is lovely this time of year. But that has nothing to Uber and its terrible quarterly performance. I don’t think so anyway… You know what? We’ll look into it.)

The loss included about $3.9 billion in stock-based compensation expenses from its IPO earlier this year. But even if you exclude that massive one-time expense (which I’m sure investors would love), Uber still lost about twice as much as it did in the same period last year.

At the same time, Uber’s revenue is growing at the slowest clip it’s ever been — up just 14% from this time last year.

“We’re very confident that this company’s maturity can be cash-flow positive and the team is focused on being able to drive big-time growth at the top line while getting more efficient in all parts of the business,” Uber CEO Dara Khosrowshahi said in a conference call yesterday evening.

“I think that there’s a meme around which is, can Uber ever be profitable. I think that myself and the team are well prepared, but I think we are very very early in this incredible journey.”

I honestly have no idea what meme Dara is talking about… 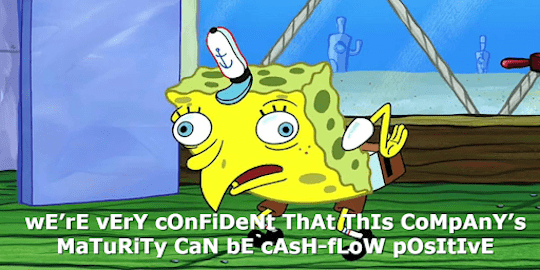 This’ll have to do.

In an interview with CNBC this morning, Khosrowshahi said the enormous butt-shattering loss was a “once in a lifetime” hit and that the only problem Uber has is a story-telling problem.

“I think we’ve got very good visibility into our own business as far as the business model and how we can tweak it and how we can drive more efficiency,” Khosrowshahi said. “We think we can not only survive, but we can really thrive in this business.”

“We’ve got to do a better job as far as telling our story to the markets. Long term, the market will take care of itself, and I think that’s what we’re focused on right now.”

Cool buzzwords, Dara. Let us know when you’ve found a way to reframe this Red Wedding as a happily ever after.

Uber’s stock dropped as much as 7.7% when the markets opened this morning. But with Uber and Lyft both announcing an end to their long-running price war, some investors are staying optimistic about the rideshare apps’ chances of becoming profitable sometime soon.

But as technology expert Beth Kindig told Market Watch in a phone interview, Uber has bigger problems than a price war.

“What Uber has yet to prove is if the cost of the ride can cover the operating expenses,” said Kindig. “I don’t like the price war narrative. What we know is that gross bookings are growing but revenue is in the low double digits while losses are accelerating due to subsidizing rides.”

What do you think? Is Uber just treading water until the money runs out or is it just no good at telling its story?

Shoot me an email and we’ll discuss it in the comments next week.

Facebook (FB) is offering news outlets millions of dollars to license their content for the website’s upcoming news section, according to the Wall Street Journal. And they should know because the WSJ was one of the companies offered the deal.

(Incidentally, if you want to see an exercise in pointlessness, refer to any article where the Journal uses itself as a source. “People familiar with the matter said this.” “Some people who know what’s going on — but I can’t tell you who — said that.” “Wow, our source is so handsome and good at Ultimate Frisbee, it’s a literal crime that no one will date him.”)

According to the Wall Street Journal’s “sources,” Facebook is offering as much as $3 million to host headlines and snippets of articles from news outlets on the social media website.

That may be true (and I know it is because my mother-in-law floods my feed with the damn things), Facebook doesn’t pay anybody for the “privilege” to host those articles on the site. And, of course, websites don’t see a dime of advertising revenue unless folks actually click through to the site.

This was seen as “totally fine, nothing to worry about” in the past. But as ad revenue from traditional media has all but dried up, Facebook has come under fire for “monopolizing” the arena of online advertising.

According to eMarketer, Facebook and Alphabet (Google’s tech daddy) eat up more than 60% of all digital advertising revenue in the U.S.

Facebook would argue that articles posted on its website drive traffic to the traditional news outlets. But in 2019, as murmurs of the monopoly of big tech build to a dull scream, Facebook is looking to do anything to get lawmakers off its back.

Ohio Accidentally Did a Marijuana Legalization

According to City Attorney Zach Klein, the slip-up happened when the state legalized hemp last week and accidentally changed the legal definition of marijuana.

The bill, signed into law Tuesday, July 30, legalized the growth and sale of hemp in Ohio. (Which is great. Hemp is a super crop that provides multiple avenues of revenue for Ohio farmers.)

The problem stems from a necessary attempt to define the difference between hemp and marijuana. (How about “Hemp is pants, Marijuana is cigarette”?)

“Now we have to be able to distinguish the difference between hemp and marijuana,” said Jason Pappas, Vice President of the Ohio Fraternal Order of Police. “That is not possible for a human being to do, that has to be done through crime analysis.”

(I bet it would be possible for my nephew Jeremy. Please hire him as your drug-sniffing human, Ohio. I haven’t seen him move from that one spot on the couch in days.)

According to the law, if the plant contains more than 0.3% THC then it is marijuana and illegal.

Labs in Ohio can test for the presence of THC… but they can’t tell what the percentage of THC is. In which case, even if it’s the dankest bud known to man, Ohio legally can’t say whether or not its marijuana. (Gasp! It’s Schrodinger’s Chronic.)

“This bill de facto legalizes marijuana in Ohio… at least for a time,” said Executive Director of the Prosecuting Attorneys Association Louis Tobin, who has never missed a chance at an I-told-you-so in his life. “We raised this concern with legislators during debate of this bill. It’s disappointing those concerns were rejected.”

The Columbus City Attorney says not only will he not only not prosecute misdemeanor pot cases during this time, but he’s also dropping all pending cases. 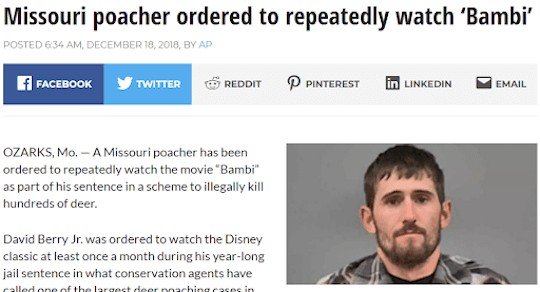 In our-healthcare-system-is-totally-fine news, an elderly couple killed themselves earlier this week because they couldn’t afford their medical costs.

On Wednesday morning, a 77-year-old man in Washington State called 911 and told the dispatcher he was thinking about committing suicide. Reportedly, the dispatcher tried to keep him on the line but the man said “we will be in the front bedroom” and hung up.

When authorities arrived at the house moments later, the man and his wife were already dead, an apparent murder-suicide. 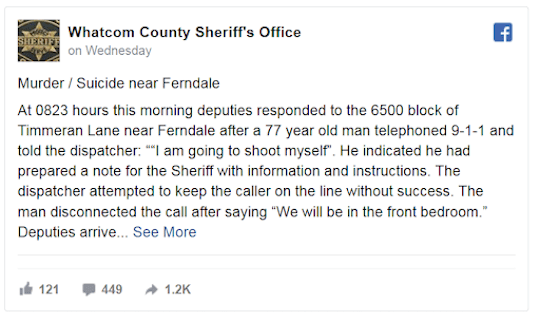 According to the sheriff’s statement, several notes were left around the home “citing medical problems with the wife and expressing concerns that the couple did not have sufficient resources to pay for medical care.”

“It is very tragic that one of our senior citizens would find himself in such desperate circumstances where he felt murder and suicide were the only option. Help is always available with a call to 9-1-1,” said Bill Elfo, Whatcom County Sheriff.

What happened on Wednesday was tragic. But it’s not news. It’s just another reminder of something we all know too well. Our healthcare system is broken. And until we do something about it, nothing is going to change.

If the definition of insanity is doing the same thing over and over and expecting different results, then I’m afraid this country is certifiably insane.