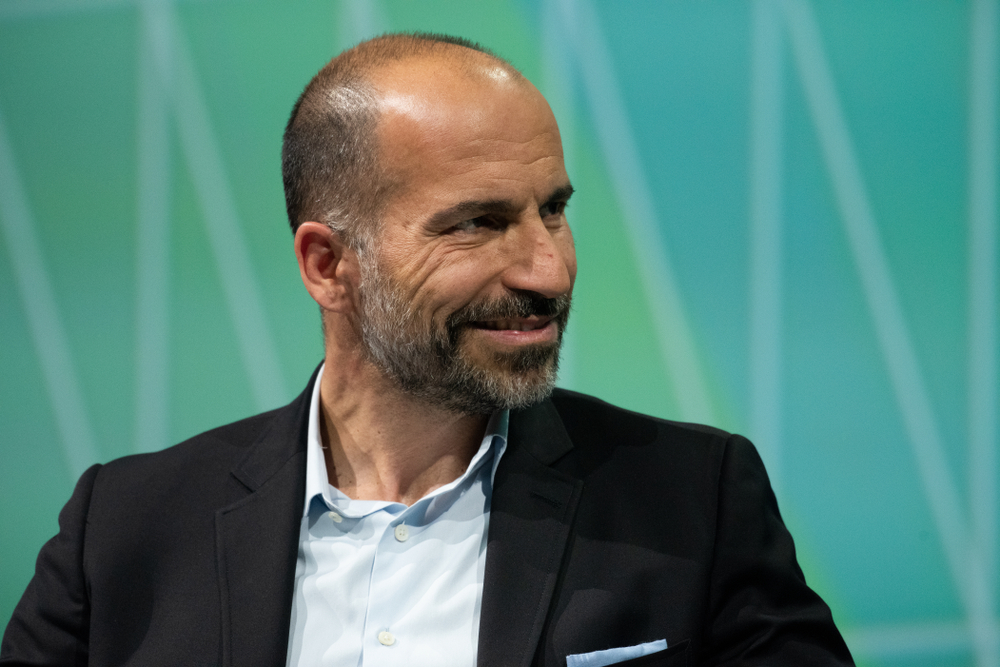 Uber CEO Says Murdering a Guy Could Happen to Anyone

Hong Kong’s stock market had its worst day in months, after some idiots thought it would be a good idea to introduce live ammunition and immolation to this fat little powder keg.

Tensions were fraught this weekend, following the death of a student protester on Friday, who passed away from injuries sustained from a one-story fall in a clash with police. (Protestors say they police may have “encouraged” the fall, while Hong Kong officials say, “Nuh-uh.”)

Hong Kong was bathed in tear gas and smoke from localized fires as protestors and police waged war across the city Saturday and Sunday. But the violence came to a head this morning when a traffic warden shot a protester in the chest at close range. (There’s got to be a better way to divert traffic than that.)

The 21-year-old protestor was rushed to a nearby hospital where he underwent emergency surgery. He’s currently in critical condition according to the Hospital Authority. But Hong Kong police are hoping he gets better soon (so they can officially arrest him).

A brutal video of the incident was leaked online and quickly went viral (just like another document of modern revolution, Charlie Bit My Finger), only adding fuel to the fire. 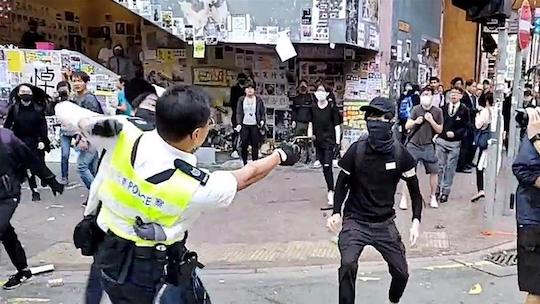 However, the police weren’t the only ones crossing lines of basic human decency this morning.

A group of idiot protestors doused a man in flammable liquid and set him on fire after he confronted them for vandalizing a subway station. The man received burns to his torso and is also said to be in critical condition.

Hong Kong’s stock exchange, the Hang Seng, had its worst decline in months, as folks started to wonder if this whole civil unrest thing wasn’t just a phase.

The benchmark closed 2.6% lower, with violence and striking workers disrupting business and public transport throughout the city. Property and retail stocks were hit the hardest, with declines across the board between 4% and 7%.

For obvious, tear-gas-related reasons, the Hang Seng has been the worst-performing equity market in Q3 of 2019. Though between early October and November, the market rose 9% as optimistic bet that the Hong Kong protests would be ending soon.

(And personally, I would love to be getting my news from whatever rose-tinted nonsense factory they must be reading.)

There’s no telling how long these protests will last. But Hong Kong Chief Executive Carrie Lam said Monday evening that the city’s government won’t be giving in to protestor’s demands.

“If there is still any wishful thinking that by escalating violence the government will yield to pressure to satisfy the so-called political demands, I am making the statement clear and loud here, that will not happen,” said Lam.

Uber CEO Says Murdering a Guy Could Happen to Anyone

Uber CEO Dara Khosrowshahi says the assassination of journalist Jamal Khashoggi was a “mistake” and we all make mistakes folks so let’s not go too hard on his murderer.

In an interview on Axios’s show on HBO (which releases on Monday mornings for some godforsaken reason), Dara defended Saudi Crown Prince Mohammed bin Salman’s decision to murder a U.S. resident for saying mean things about him in the news.

“It’s a serious mistake. We’ve made mistakes too, right, with self-driving,” said Dara, referring to the pedestrian killed by one of his robot cars last year.

“We stopped driving and we’re recovering from that mistake. I think that people make mistakes, it doesn’t mean that they can never be forgiven. I think they’ve taken it seriously.”

Because Axios‘s Dan Primack isn’t an idiot, he pointed out to Dara You-Know-I’m-Avoiding-Typing-His-Last-Name that there’s a difference between accidentally killing someone through negligence and ordering a hit on them and having the body chopped up and buried in a Turkish forest.

If you’re wondering why Primack is asking the CEO of the worst business model in the world his opinions on a Saudi assassination plot, well hold onto your butt, because Saudi Arabia just so happens to be one of Uber’s biggest shareholders.

Yasir Al-Rumayyan, an official from Saudi Arabia’s sovereign wealth fund, has a cozy little seat on Uber’s board (which I’m sure has nothing to do with Dara’s newfound love for forgiveness).

“I think from a Saudi perspective, they’re just like any other shareholder,” said Dara, steam shooting from his collar. “Now we’re a public company, anyone can invest in our company (…) they’re a big investor, just as you could be a big investor as well.”

An hour after the interview, Dara called Axios to express regret for saying all the dumb things he said.

The New York Department of Financial Services (DFS) is investigating complaints that Apple’s credit card sets different credit limits based on your gender. (And you can probably guess which gender is getting a higher limit.)

The hubbub (fun word, we should bring it back) kicked off when software developer David Heinemeier Hansson tweeted that his credit limit was 20x higher than his wife’s, even though they file joint tax returns and she has a wa-a-a-ay better credit score than he does.

“The @AppleCard is such a [censored] sexist program,” wrote Hansson. “My wife and I filed joint tax returns, live in a community-property state, and have been married for a long time. Yet Apple’s black box algorithm thinks I deserve 20x the credit limit she does.”

Shortly after Hansson’s tweet, co-founder of Apple and human plushie Steve Wozniak tweeted that the same thing happened to him and his wife, despite having no separate bank accounts or assets.

The root of the problem seems to be Apple’s algorithm (gasp, sexist math!) which automatically assigns you a credit limit based on a number of contributing factors.

Goldman Sachs, who partnered with Apple to release the Apple Card, has not come clean on what those factors are. So we can only assume that they’re the usual stuff like credit score and how low your genitals hang.

“We don’t have transparency on how these companies set these things up and operate,” said Wozniak in an interview with Bloomberg. “Algos (algorithms) obviously have flaws (…) A huge number of people would say, ‘We love our technology but we are no longer in control.’ I think that’s the case.”

After Twitter was flooded with similar complaints, the DFS announced it was launching an investigation into Apple’s allegedly sexist math.

“Any algorithm that intentionally or not results in discriminatory treatment of women or any other protected class violates New York law,” said the DFS in a statement.

The DFS said it will conduct an investigation to determine whether New York law was violated and ensure all consumers are treated equally regardless of sex.

Right now, even Apple doesn’t know the nitty-gritty details of how Hansson’s wife’s ended up with a lower credit limit. Apparently, the algorithm acts like a “Black Box” for calculations, spitting out judgments without providing a way to unravel how was determined (like Judge Judy).

How long is it before Silicon Valley gives birth to the first Algorithm-worship cult?

I hope this is a teaser for Bureaucracy: The Musical

Predicting the Future of Tech

Tech prophet George Gilder predicted the existence of the iPhone 13 years before its release.

He forecast the death of cable TV and the rise of Netflix more than a decade before it existed. (If only the folks at Blockbuster had read his books.)

He tipped off some guy called Ronald Reagan about a little, barely understood technology known as the microchip.

And on November 17, old George is coming out of retirement swinging to reveal his most remarkable prediction yet.

This prediction could rock our world.

If what George is seeing is right, this will shake the foundations of Silicon Valley. It could destroy Google, Facebook, and Amazon, and it will change the entire global economy forever. (And I just realized I have no idea how I fit into this… I need to call George.)

But, while it could be distavorous for the folks at Amazon, getting ahead of this prediction could make you as much as $1 million in profits over the long run… potentially from only a handful of investments.

You do not want to miss this free event.