Trump’s Inauguration: 3 Things You Missed in the Wilderness

Chaos has erupted throughout the States. (Welcome back, “anti-war” Left.)

We’re still here, as you may know, in Pedra Branca, Brazil, digging into the futuristic “streams” at Exosphere Academy.

More information on these topics to come.

Due to a deep passion for not wanting to waste our time, we haven’t had much time to engage in the Greatest Show on Earth (AKA American politics). And have had very slim intentions to, too.

Rather, when we clutch a moment to spare, we use it to focus on those stories not being pushed relentlessly by the Great Distraction Machine.

Which is why, today, we bring to you three things you might’ve missed last week while hacking your way through the emotional wilderness of Trump’s inauguration.

Most people have never heard of Sturgill Simpson (your editor included) until this weekend. Even so, he was recently nominated for a Grammy and given a spot on the latest SNL.

Good on him, then, for performing his song, Call to Arms. It’s a surprisingly deep song to play for the heavily sedated, surface-skating saphead diversion known as “SNL.”

I done Syria, Afghanistan, Iraq, and Iran
North Korea, tell me where does it end
Well the bodies keep piling up with every day
How many more of em they gonna send

Hmm… lots of buzz about Obama’s legacy. But many of the mainstream sources are taking far from a panoramic view.

Let’s take a quick look, then, shall we?

Despite Obama winning a Nobel Peace Prize (and over $1 million) for being the assumed “peacenik prez,” Obama spent his entire presidency at war.

His weapon of choice? Drones.

In 2016 alone the U.S., under the Obama administration, dropped 26,172 bombs in seven predominantly Muslim countries.

Because, you know, war = peace.

Obama also carried out a program which assassinated U.S. citizens via drone strikes without due process. Moreover, he kept a “Kill List” close to his chest, because the “most transparent administration” was, it turned out, as translucent as a Peruvian mud bath.

Also, under this program, a 16-year-old American citizen was blasted to bits only two weeks after his father, Anwar al-Awlaki, suffered the same fate.

(And, now, of course, Trump has that power.)

Drone strikes aside, the more reflective of us might also remember the“humanitarian intervention” lie in Libya.

An invasion which led to U.S.-complicit genocide and chaos, a violent grip of which Libya is still struggling to free itself from. (In the words of Hillary Clinton, “We came. We saw. He died.”)

In 2013, the “humanitarian interveners” set their red sights on Syria.  Initially, the narrative fell flat. Until, of course, the rebel Stormtroopers — AKA “moderate rebels” — came marching in.

Also, as Luke Rudkowski of We Are Change points out in a recent Youtube video, Obama “used the Espionage Act more than any other president before him combined to persecute journalists and whistleblowers.”

Last but not least…

Obama repealed the Smith-Mundt Act of 1948, which originally made it illegal for the government to use propaganda to influence U.S. public opinion. This, of course, was merely a formality.

3.] The ultra-bizarre “Pizzagate” narrative has hit the mainstream media (again), but this time it was actually given a fair shake…

“I’ve gotta’ warn you,” CBS anchor Ben Swann said on Reality Check, “what we’re going to talk about tonight is going to be disturbing to some people.”

Before we show the video, we must first make one important point: We have no idea if anything about the Pizzagate investigation is real.

But it’s typical of the mainstream media to grab the story and paint it as “fake news” without addressing any of the concerns of the independent researchers in the Pizzagate “swarm.”

Which, of course, only tends to make the theorists feel vindicated, and even more emboldened in their search for their version of truth.

Are Podesta’s emails cause for concern? If you’re unfamiliar with the Pizzagate scandal, decide for yourself with the video below. 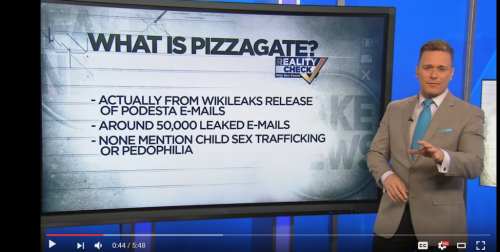 [Note: Since the segment aired, CBS seems to have pulled it off its website.]