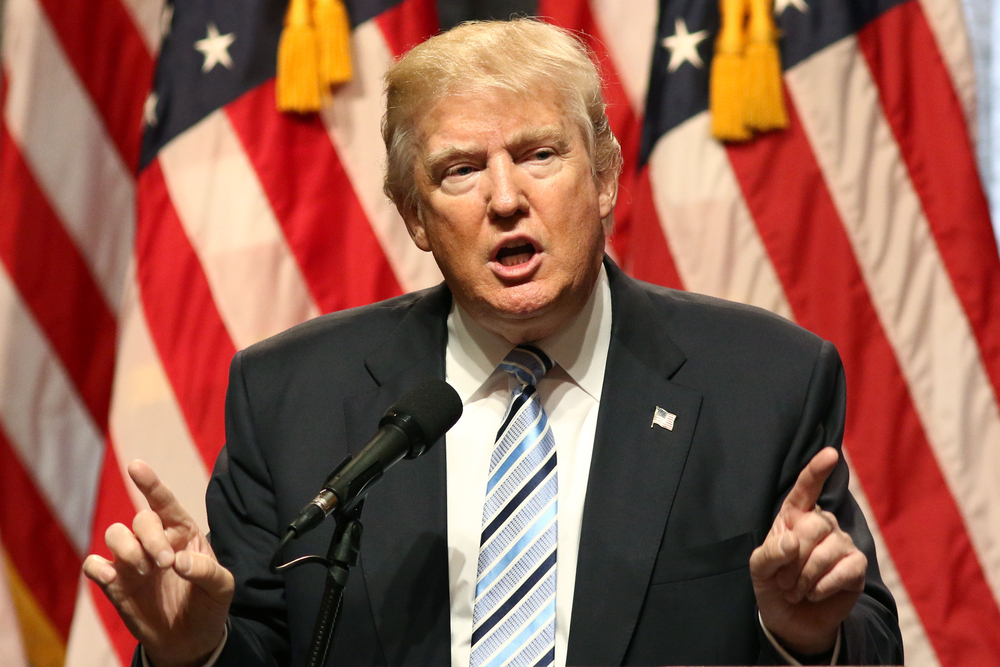 The Art of Dealing with The New York Times

The President was up bright and early this morning, taking to Twitter to defend $1.17 billion losses over 10 years as reported by the New York Times. (Trump’s love of Twitter has made the White House press office all but redundant these days.)

Allegedly, an anonymous source left a bundle of Trump family tax information in an NYT reporter’s mailbox. (Don’t you hate when they stuff your mailbox with Chinese menus and a decade of your president’s tax returns?)

It’s important to note two things at this point:

According to the Times, their informant supplied them with all the figures that were plugged into the tax forms between 1985 and 1995, not copies of the president’s actual tax forms.

Reporters for Times then attempted to recreate what Trump’s returns would have looked like by plugging them into the old tax returns by hand. (I hate doing my own taxes. Imagine having to do 10 years of someone else’s tax returns.)

If these figures are true, the president lost more money than any other American taxpayer during that 10-year period. In one particularly bad year, it looks like the president’s losses amounted to 1.7% of total losses reported by individuals to the IRS this year.

In a statement to the Times, one of the president’s lawyers said the tax information was “demonstrably false,” and that the NYT’s statements “about the president’s tax returns and business from 30 years ago are highly inaccurate.”

He added on Tuesday that “I.R.S. transcripts, particularly before the days of electronic filing, are notoriously inaccurate” and “would not be able to provide a reasonable picture of any taxpayer’s return.”

Trump was up at 4am this morning (we got to get the president on a better sleep schedule) to tweet about the report.

Trump defended the losses as part of the “sport” of the real estate business in the 80’s. (With losses of this magnitude, Trump would be able to carry the losses forward and essentially never legally have to pay taxes in his lifetime.)

The president also said that the “old information” was highly inaccurate and a “FAKE NEWS hit job.” 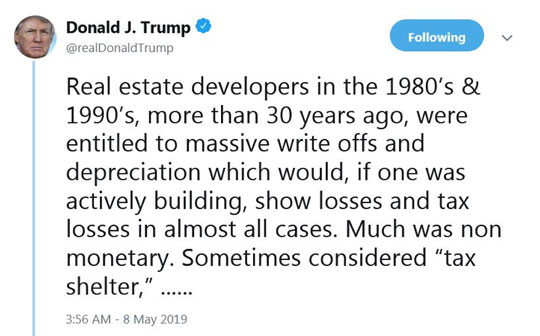 It’s nice to have a president with a catchphrase for every occasion.

What do you think? Were these $1.17 billion in losses a clever part of the “sport” of avoiding real estate taxes in the 80s? Is the president not the businessman he’s made himself out to be? Or is this, as the president says, a “FAKE NEWS hit job?”

Click here to send me an email and we’ll have it out in the comments tomorrow.

The Day the Uber Stopped (and Also Lyft)

I hope you’ve got a designated driver for happy hour tonight. (Because not drinking on a Wednesday isn’t an option. Hump daaaay.)

Uber and Lyft employees in the U.S. and UK are striking today, demanding better pay and treatment from their Silicon Valley overlords.

The “international day of action” will effectively shut down the drunk-person delivery service in more than a dozen cities — including two of Uber’s largest profit centers, New York and Los Angeles.

The worker’s demands vary from region to region, depending largely on the laws that are already in place.

But, in general, drivers are demanding:

The drivers have strategically chosen a very annoying time to hold their protests.

Just two days from now, Uber will go public. Which means the investors are watching the company like a hawk. (Historically the most investing savvy bird.)

For the next few days, every single crack in Uber’s armor is going to be under the microscope. And that’s great publicity when you’re looking to kick up a ruckus and get as many eyes as possible on your cause.

In its call to action for today’s protests, the New York drivers’ organization said: “Uber/Lyft going public on the stock market will make billionaires of Uber and Lyft bosses while drivers struggle in poverty and the companies destroy the livelihoods of drivers in every sector.”

All this talk of fair wages and lower commissions is going to make Uber’s prospective investors a little nervous.

Even with its current business model, Uber hasn’t been able to turn a profit. If it has to start treating employees like human beings, its entire business model is shot.

Of course, Uber and Lyft have no intention of taking on millions of drivers as full-time employees. In fact, in the next few years, they plan to have no drivers at all.

This tiny piece of tech is at the heart of today’s protests.

If Uber and Lyft can get it working — and it looks like they almost have — it will revolutionize their business models and make the tiny company that makes this tech an absolute fortune.

You could pick up this tiny stock today for just $17. But the longer you wait, the more people are going to find out about this play. If you had checked out this stock when we were talking about it at the start of the year, it was just $12.

Click here now and our tech trends expert James Altucher will tell you all about this little company and the secretive tech that’s going to drive a $15 trillion tech revolution.

Novartis AG is bringing a new drug to market with a potential $2 million price tag.

The gene therapy drug known as Zolgensma is aimed at babies with spinal muscular atrophy (SMA) — a disease that typically kills children before their second birthday. (Man, I hope those babies have some well-paying jobs.)

Between 400 and 500 babies are born with SMA every year in the U.S. (so Novartis needs to squeeze as much dough out of those 500 babies as it can).

Novartis execs say the high cost of the drug is justified by assigning a dollar value to each year of quality life the patient will enjoy as a result of the drug. And because the patients are babies, that’s a whole lot of extra life you get to charge for.

The company says that its developing installment plans to help smooth out the costs. (If that baby starts working now, they could have the treatment paid off by the time they’re dead!)

Another option being mulled over by Novartis is a value-based payment system, where you get a partial refund if the drug doesn’t work and you die anyway. (Awesome.)

What do you think folks? Is this the real price of life-changing medicine? Or just another symptom of our joke of the healthcare system?

Breaking: Ransomware Attacks Occur as Predicted by One Last Thing

Today’s One Last Thing was supposed to be a follow up to the story on Chinese internment camps we started yesterday.

But we just received some breaking news on a previous story we reported on here earlier in the year. (We’ll return to our planned story tomorrow.)

Back in March, we predicted that there would be a large-scale ransomware attack by Russian hackers, just before Mother’s Day this year.

And I’m not one to miss a chance to toot my horn. So let’s dust it off and give the old girl a toot.

Our researchers had discovered a pattern to the ransomware attacks, which seemed to be focused on gift-giving holidays, especially Valentine’s day and Mother’s day. (Because your mum is more likely to click a suspicious virus-carrying link if she thinks it’s a gift from you.)

Well, it’s Mother’s Day this Sunday and the attacks are starting to heat up.

Say what you will about Baltimore, but we’re never short on dramatic news stories.

Police, fire, and emergency response systems have not been affected, but nearly every other department of city government has been taken hostage by hackers.

In a fun little “ransom note” sent to all infected computers, the hackers demanded 13 bitcoins (about $76,280) for the return of all the data.

“We’ve watching you for days and we’ve worked on your systems to gain full access to your company and bypass all of your protections,” said the note. “We won’t talk more, all we know is MONEY! Hurry up! Tik Tak, Tik Tak, Tik Tak!”

Judging by their cadence of speech and grammatical errors, the hackers are clearly… Google Translate! (Or the Russians or Chinese or people who want you to think they are Russian or Chinese.)

The city has shut off all government computers to try and stop the spread of the virus. The government has suggested that any worker who can’t work without their computer to go out and “help clean up the streets.” (Are they encouraging bureaucrats to pick up trash or become crime-fighting vigilantes?)

The city has said it won’t pay the ransom. And you know what that means. All that data is gonzo.

Baltimore isn’t the only city dealing with ransomware problems. All over the world folks are being hit by a ransomware virus known as MegaCortex.

A UK cybersecurity company has reported outbreaks of the virus in the United States, Canada, the Netherlands, Ireland, Italy, and France. And you can expect those attacks to continue well into the weekend as we approach Mother’s Day.

On Monday, James Altucher filled in for me, with an expose on the deeper implications of the college admissions scandal and how to fix them. You guys had some ideas of your own and criticisms of James’s ideas:

As part of the sentencing for the parents involved in this scandal, they can be court ordered to donate a portion of their money to student debt or student scholarships for a period of 5-10 years post sentencing. Depending on their financials the court can order these donations/payments to be in excess of hundreds of thousands to millions of dollars. Thanks. — Maura P.

So what do we do with the students that have paid their debt? It sends an awful message to be able to borrow money with no penalty for not paying their debts. Do you write a check to reimburse those who have paid? — Pat G.

Well Pat. I can’t speak for James. But… if you build a guard rail on the side of a cliff, is that unfair to all the folks who’ve already driven off it? If we fail to innovate because it would be unfair to those who came before, we’ll never get anywhere.