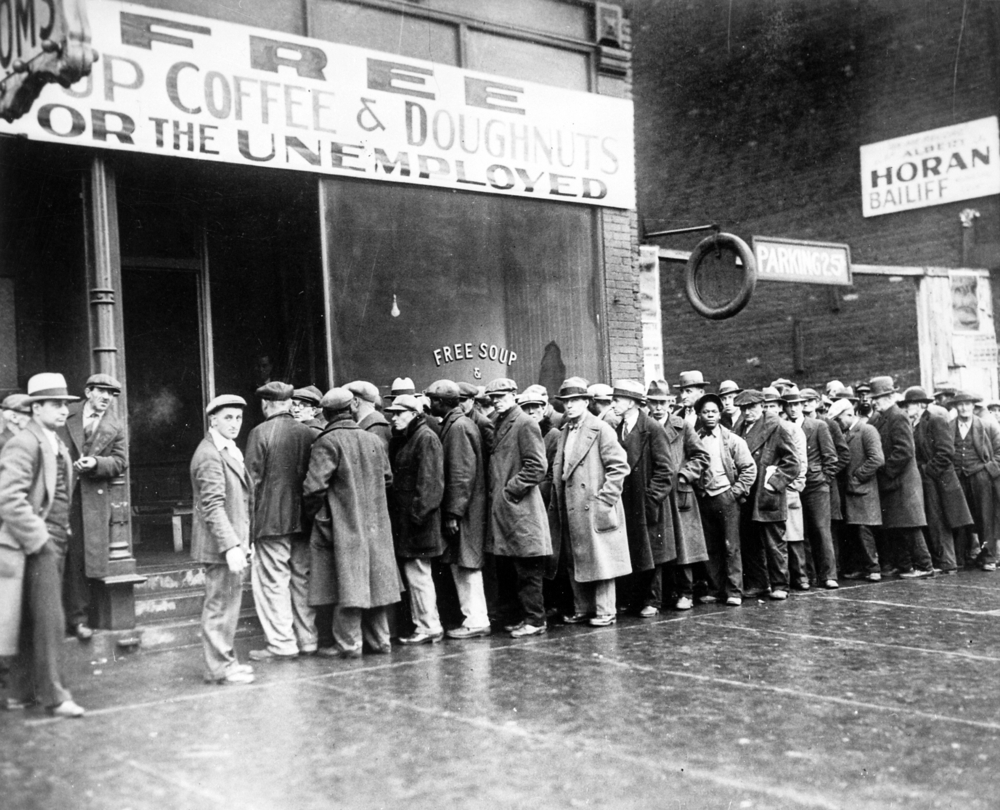 [ED NOTE: Shane is out on vacation today but he didn’t leave you hanging. Today’s issue features content from guest editor and macroeconomic expert Graham Summers. And if you miss Shane all that much, the latest episode of the One Last Thing podcast just dropped. You can listen for free here on Spotify or iTunes.]

You see, there are two types of jobless claims: initial and continuing.

Let’s say you lose your job because the economy is shutdown temporarily. When you go to file for unemployment, you would file an initial jobless claim. Meaning this is the first time you’re applying for unemployment.

Meaning you continue to be unemployed.

Everyone knew that the economic shutdown meant that initial jobless claims in the U.S. would be horrific. The big question was whether people would be unemployed for a short–time period and then return to work… or if they would stay unemployed.

The data suggests they are staying unemployed.

So a total of 38 million Americans have filed for unemployment at least once… and 25 million of them remain unemployed. And why wouldn’t they?

A study from the University of Chicago has revealed that 68% of unemployed Americans are receiving MORE money from unemployment than they were receiving from their former jobs.

In fact, the median replacement rate is 134%, meaning they are making 34% MORE money from being unemployed than they were from working.

What incentive, if any, will there be for these people to return to work when the economy reopens? If you can make more money from NOT working… why would you want to start working again?

Okay. We’ve covered a lot of ground here, so let’s do a brief recap:

Add it all up, and this means the U.S. will likely be spending TRILLIONS of dollars on unemployment going forward.

Small wonder then why gold and precious metals continue to erupt higher.

An Incredible Environment for Precious Metals

While CNBC focuses on stocks — which remain well below their pre–COVID–19 highs — gold has already recouped ALL of its March losses and has risen to hit a new 52–week high. 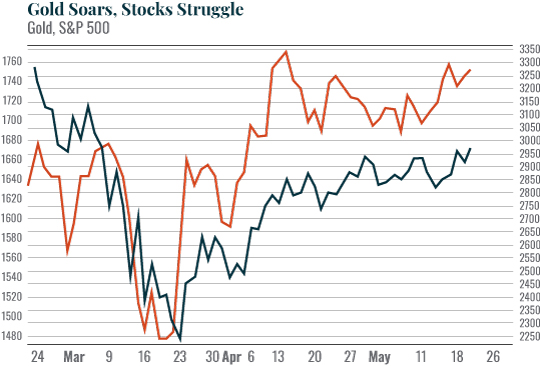 Indeed, while stocks are up 28% from their March lows… gold miners are up a staggering 78%, and gold mining juniors have nearly doubled, rising 94%! 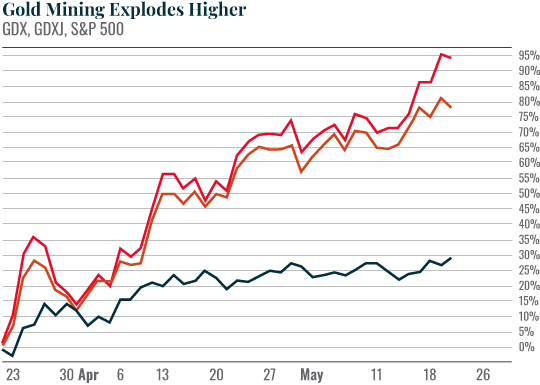 Will the economy rebound quickly? Will Americans continue to stay unemployed? Will we have a second wave of COVID–19 that forces the economy into an even deeper depression?

I have no idea. No one does.

The ONLY thing we do know is that the government and the Fed will be printing trillions of dollars to fight these issues. And that means gold going to new highs, with gold mining companies outperforming the stock market.

That’s where I’m looking for investments today. You should too.

In this week’s episode, the Nasdaq plans to delist Starbuck’s Chinese rival, one–third of businesses will not make it out the other side of this pandemic, and every day is Cyber Monday when you can’t go outside.

Fill your ears, folks. Subscribe to our feed and you can listen to every episode as soon as it drops on Friday, even before you get the email alert in your daily One Last Thing.