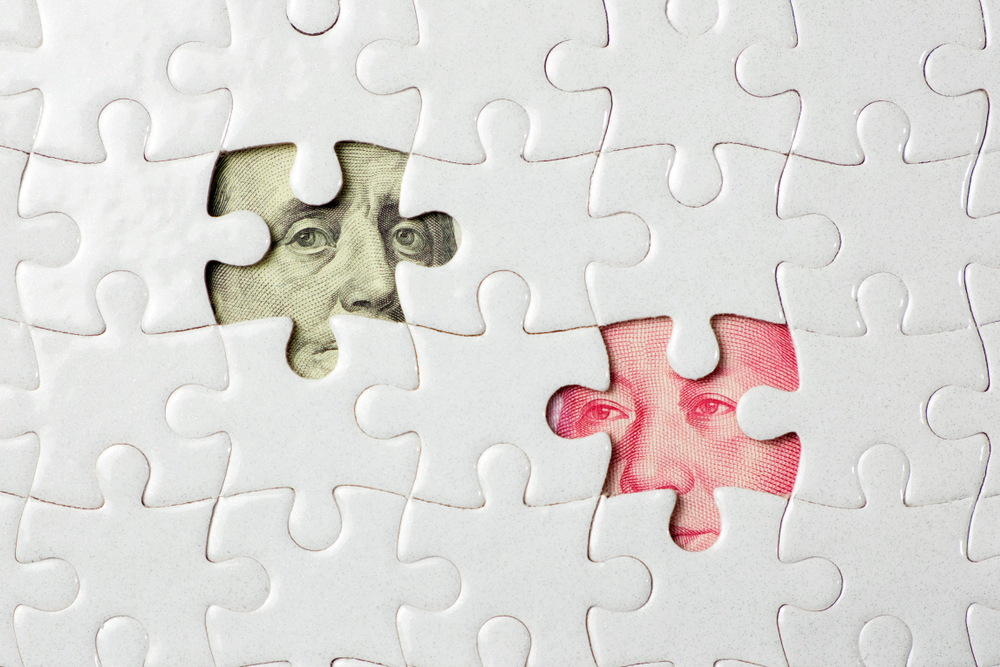 TRADE WARS 2: The Revenge of the Tariffs

TRADE WARS 2: The Revenge of the Tariffs

(This is the One with the Dark Ending)

After President Trump and President Xi Jinping met at the G20 summit earlier this month and agreed to restart trade talks, it felt like tensions with China were easing up a little.

But less than a week into the resumed negotiations, the president is back to business as usual, dispensing tariffs like a scantily clad woman launching t-shirts at a monster-truck rally.

In a press release… Nah, I’m kidding… In a series of tweets last night, President Trump went on the offensive, accusing China of backing out of an agreement to purchase U.S. agricultural products and announcing a swath of new tariffs on Chinese goods.

“Our representatives have just returned from China where they had constructive talks having to do with a future Trade Deal,” the president tweeted. “We thought we had a deal with China three months ago, but sadly, China decided to re-negotiate the deal prior to signing.”

These new tariffs will levy a 10% tax on $300 billion of Chinese goods and will be completely separate from the first round of tariffs already in place.

Those old tariffs mostly affected industrial goods (like metal tubes and other examples of industrial goods that I can’t think of right now). But this round of levies is consumer focused, targeting smartphones, toys, t-shirts and socks. (Gasp. I wear socks!)

According to the Consumer Technology Association, these fresh tariffs would affect about $45 billion in cellphones, $39 billion in laptops and tablets, and $5.4 billion in videogame consoles.

Taking a Bite Out of the Apple

The folks at Apple are probably shaking in their ergonomically designed egg chairs right now.

Analysts predict that this would add an extra $40 to the cost of one of every Apple’s flagship iPhone, the XS (so-named because its price is X-S-ive). Apple will be forced to eat these costs or pass it on to the customer and risk a decline in sales.

Shares of Apple fell 2.1% yesterday after the news broke and continued to tumble this morning when the markets opened, dropping as much as 2.75% at the time of writing.

Of course, Apple is far from the only one feeling the hurt right now.

Wall Street shriveled like a grown man who took a sharp kick to the groin, as anxieties over a prolonged trade war and the slowing global economy bubbled to the surface.

The DJIA closed down 281 points, wiping out a rally of more than 300 points. The S&P 500 dropped 0.9%, while the Nasdaq Composite shrank 0.8%. Oil prices did a backflip into a dried-out pool, dropping almost 8%, the sharpest drop since February 2015.

Rumors have been making their way around the Hill that U.S. Trade Representative Robert Lighthizer has started to butt heads with President Trump on Chinese trade policy.

Neither party has said so publicly (Lighthizer likes to reserve any public speaking opportunity solely for trash talking Beijing).

(Which makes sense, because Lighthizer infamously hates China. The longer these negotiations go on, the more he has to keep going back and eating in that one American-themed restaurant.)

A spokesman for Mr. Lighthizer, said he “supports the president’s action” and is 100% loving this, no objections.

In his tweets, President Trump hinted at the possibility of canceling the planned tariffs before the September 1 deadline if certain conditions were met.

“The 10% is for a short-term period and then I could always do much more or less, depending on what happens with respect to a deal,” President Trump tweeted.

However, at a press conference at the White House later that day he took a more resolute approach and told reporters that “if they don’t want to trade with us anymore, that would be fine with me.” (And then he took his ball and went back inside the White House.)

Revealing One of Our Winners

I’m going to reveal one of the stock picks from one of our top analyst’s premium subscription services, Ray Blanco’s FDA Trader.

Now for obvious reasons, we don’t normally do this. Because readers who pay for his service would be pissed if they thought Ray was giving away his best stocks for free somewhere else (and Ray would probably strangle me and I like my neck where it is).

But one of Ray’s picks became so newsworthy last week, I had to talk about it. After some finagling and a very long string of emails, I got Ray’s blessing. (Thank you, godfather.)

If you’re an eagle-eyed investor, you might have seen the news last week about Novocure (NVCR).

Last week, after the company’s Q2 report, the stock surged more than 8.5%. That may not sound “newsworthy” to you, but buckle in. Here’s where it gets wild.

Novocure’s stock has risen 130.23% this year. Not too shabby. But Ray didn’t tell his reader’s about Novocure at the start of the year.

He told his readers to get in on Novocure at $6 per share. This morning, the little stock that could broke past $86, handing the readers who followed his advice an open gain of more than 1,200%.

Ray still loves Novocure. Just this week, in an issue of FDA Trader, he was talking about how much room for growth the company still has.

“The company reports just over 2,700 patients using its devices right now and all, or nearly all of these patients are using the company’s glioblastoma device. But there are over 15,000 glioblastoma diagnoses every year in the U.S. alone,” writes Ray.

“Glioblastoma is one of the deadliest forms of cancer. Only a small percentage of patients survive to five years from the date of diagnosis. Novocure has shown its device can help improve that percentage.”

“Just in glioblastoma, Novocure has a market opportunity 5.5 times greater than it has captured. On its current growth trajectory, the company could secure over $1.5 billion per year from glioblastoma alone.”

And Ray points out that glioblastoma is just a small piece of the puzzle. Novocure just received approval to treat a rare form of cancer. And it’s got three other treatments in phase three trials.

Now that Novocure has banked Ray’s readers a 1,200% gain, he’s happy to give this stellar pick away. But if you want his cutting edge research and top biotech picks as they happen, you need to go directly to the source.

Click here to find out how Ray uses the Biotech Cash Calendar to select stocks like Novocure so you don’t miss out on his next big winner.

The economy may be slowing down, but it’s still pumping out jobs like a champ.

July’s jobs report is out, and (for once) it’s remarkably close to analysts’ expectations. According to the Labor Department, U.S. employers added 164,000 jobs last month.

The unemployment rate held steady at 3.7%, holding at a nearly 50-year low. And when unemployment is this low, it creates opportunities for low-skilled workers who might otherwise struggle to find a job (like certain nephews who need to get off my couch, Jeremy.)

At the same time, unemployment is down across the board for all races and gender groups. (Racism is dead! We did it, folks!)

Hispanic women saw the biggest drop in unemployment, falling from 4.2% in June to 3.8% in July.

Wages are still growing, though slowly. Average hourly wages went up eight cents an hour to $27.98, a 3.2% increase from last year. (I’m still waiting on my eight-cents raise from my publisher, though.)

Manufacturing growth has taken a hit from tariffs and trade uncertainty, with factories adding just 16,000 jobs in July. Don’t expect that number to get any better until the trade war is tied up with a bow or kicks off a full blown shooting war.

The writers really started to phone it in around season 2019 of Earth.

The Medical Internet of Things and Beyond

You’ve probably heard of the Internet of Things (IoT) before.

If not, just know it’s an annoying and somewhat vague buzzword with a lot real-world potential. It refers to a technological shift that’s happening as we speak — one that you’re already a part of. (Dun dun dunnnnn.)

The Internet of Things is exactly what it sounds like: Just sticking the old internet into things. In the IoT, almost every physical object you interact with will be connected to the internet, enabling them transmit and receive data.

And I’m not just talking about phones here. TVs. Fridges. Ovens. Cars. Exercise bikes. Your bed. Even the dog.

Anything that can be connected to the internet will be. And these “things” will constantly be gathering and transmitting data — far more data than we use today.

Why would we do this? Why would people want to connect my socks to the internet and count my steps and measure my sweat? (This is an honest to god real idea in the Internet of Things.)

All this lovely information gives companies making products and the systems they’re a part of more efficient than ever before, accelerating innovation and technological progress to a clip that would be impossible now.

Now, I’m not sure if I really need a pair of socks that knows the time in Hawaii. But this tech has huge potential that could revolutionize multiple industries.

George Gilder, the tech guru who predicted the iPhone more than a decade before it was released, says there’s enormous potential for this tech in the world of medicine.

It turns out that hospitals are burgeoning hotbeds for the myriad technologies that leverage sensors, artificial intelligence (AI), big data analytics, mobile communications, and even blockchain,” says George.

“These technologies are proving vital for patients and facilities alike.

“For example, blockchain can provide the secure basis for electronic health records (EHR) that record a patient’s medical and treatment histories. This enables predictive and precision care, as well as prescription management – all while maintaining the privacy and integrity of this protected data. Indeed, blockchain EHRs could truly accelerate the digital transformation of healthcare.

“Also of vital importance to hospital operations is communications. Make that coordinated communications that effectively link healthcare professionals, outside service providers, and patients in real time. To this end, hospitals are moving beyond the ubiquitous pager — and even mere mobile phones — to more sophisticated means.”

The IoT could revolutionize the world of medicine in many ways. But according to George, this is only a small piece of the puzzle.

George has been retired for almost 10 years. But recent advances in certain technologies compelled him to come out of retirement to make his biggest prediction yet.

George says this prophecy will change everything about our lives, from how we travel, to how we bank, to how we buy things, and more.

More wealth will be created in the next few years by the companies powering this new prophecy than at any other point in history.

And here’s the thing: it’s already started to come true.