The Shortest Deepest Recession Ever

The White House is preparing a trillion-dollar infrastructure spending package, in the hopes of stopping the economy from doing whatever it’s doing right now, according to a report by Bloomberg.

The preliminary version of the plan is being prepared by the weirdos at the Department of Transportation (I can’t say too much without endangering my life… but never feed a DoT employee after midnight), people familiar with the plan told Bloomberg.

The majority of the funds are said to be earmarked for traditional infrastructure work, like roads, bridges, and building herpetariums for DoT employees to sleep in.

A portion of the funds, however, will be set aside for building 5G wireless infrastructure and rural broadband. (Country folk like to look at nude hotties too.)

The White House declined to comment on the specifics of the administration’s plans, likely because they are in early stages of development and not yet finalized.

Instead, they restated the president’s commitment to rebuilding this crumbling cookie of a country and investing in the future.

“Since he took office, President Trump has been serious about a bipartisan infrastructure package that rebuilds our crumbling roads and bridges, invests in future industries, and promotes permitting efficiency,” White House spokesman Judd Deere said in a statement.

According to Bloomberg’s happy little leakers (I literally cannot type “people familiar with the matter” any more), the administration plans to push through the almost $1 trillion package with an existing infrastructure funding law, up for renewal by Sept. 30.

The news triggered a surge in U.S. stock futures, with companies that stand to benefit from a whole buttload of public spending getting that pre-trading bump.

For now, the White House is keeping the details of the plan under wraps. But the president is scheduled to discuss rural broadband at a White House event tomorrow, so we may learn more then (if he doesn’t end up spending the hour talking about something completely different, of course).

A low-dose steroid treatment is the first major medical breakthrough in the fight against the coronavirus, according to some folks in the UK who seem to know what they’re talking about.

Dexamethasone, a widely available steroid, has been shown in a clinical study to significantly improve the survival rates of severely ill patients with COVID-19. (Heck yeah, let’s get swole and beat the crap out of the virus.)

According to the study’s authors, the drug cut the risk of death for critical patients on ventilators by a third and patients on oxygen by a fifth.

Had the drug been employed since the beginning of this garbage fire, up to 5,000 lives in the UK would have been saved, and many more across the globe, according to the researchers.

“This is the only drug so far that has been shown to reduce mortality – and it reduces it significantly,” said Chief Investigator Prof Peter Horby. “It’s a major breakthrough.”

The study was part of a global trial to see if anything we already had lying around the lab from previous viruses would work on this thing, because that would be very convenient and save a lot of time and money on development.

The drug is a commonly available and affordable treatment for arthritis and asthma, retailing at £35 in the UK and about $47 here in the US. Vitally, it seems to stop the immune system from going into overdrive when fighting COVID-19 and killing the host’s body.

Which is great, because you’re going to need your body to do stuff after the virus is gone.

“There is a clear, clear benefit,” said Lead researcher Prof Martin Landra. “The treatment is up to 10 days of dexamethasone and it costs about £5 per patient. So essentially it costs £35 to save a life. This is a drug that is globally available.” 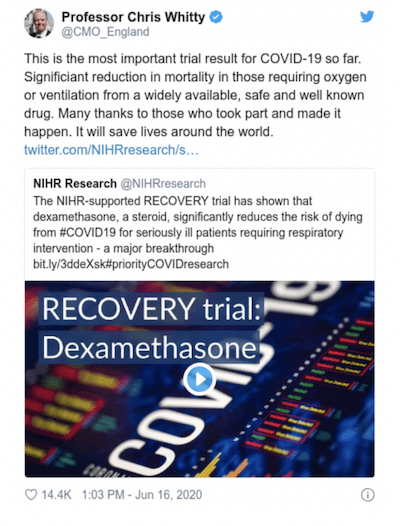 Boston Dynamics is Open for Business

Boston Dynamics will now sell anyone a robot dog, as long as you have $75,000 in your robot dog budget.

The four-legged Spot has had a painfully long development cycle, with only a select few businesses getting to test drive the machine through a limited leasing program last year.

Starting now, the robo pup will be available for general sale to anyone with 75 grand who promises not to strap guns to it or program it to feel pain. (We don’t have the bandwidth for a robot uprising right now.)

Despite the hefty price tag and puppy-like enthusiasm, Spot is mostly limited to surveying and data collection for now.

“We mostly sell the robot to industrial and commercial customers who have a sensor they want to take somewhere they don’t want a person to go,” Boston Dynamics’ Lead Robotics Engineer Zack Jackowski told The Verge.

“Usually because it’s dangerous or because they need to do it so often that it would drive someone mad. Like carrying a camera around a factory 40 times a day and taking the same pictures each time.”

You can customize your boring-task dog with a variety of different sensors and programs, depending on what boring task you need it to complete.

Boston Dynamics says it will continue upgrading Spot as it gets feedback from customers (who, I can say with 100% confidence, will request the ability to do “absolutely anything other than walk around and look at stuff”).

“The Shortest Deepest Recession Ever”

Americans bought 17.7% more crap in May than they did in April, representing a record-breaking surge in retail activity.

The unprecedented explosion of buying stuff is due, of course, to months of pent up demand from being locked indoors and not allowed to buy flat screen TVs, avocado harassers, and nut sacks (for making homemade almond milk, I’ve been told).

This is somewhat encouraging data for economists hoping to see a snapback in retail spending when states reopen. But even with the record-breaking surge in buying cool junk to make us feel better, purchases for May were still down 6.1% from the year previous.

“This may very well be the shortest, but still deepest, recession ever,” Jennifer Lee, a senior economist at BMO Capital Markets, told the Associated Press. But she also said it’s “not likely that we’ll see a repeat in June as this is pent-up demand unleashed in one month.”

In May, employers added 2.5 million jobs, but it’s unlikely that this jobs growth can be sustained throughout the year, especially if we see a second wave of the virus and a return to closures.