The Philippines Proves the Obvious: Tyranny Doesn’t Save Lives

Only the dunciest of power-hungry leaders around the world haven’t already used this crisis as a feeding frenzy. And only the dunciest “journalists” would use those leaders who have done so as models of success.

(Enjoying your ride yet?)

In the Philippines, President Rodrigo Duterte has taken it even further. If you’re caught without a mask in the Philippines, you could face up to 30 days in prison. More concerning however is that Duterte even gave his police officers carte blanche to shoot whoever resisted the lockdown orders. (Though he said to do so at the first hint of violence, he also sent the crystal clear message that police officers would not be held accountable for killing citizens.)

For months, of course, we’ve been told that strict lockdowns were necessary in order to keep our populations safe and healthy. If true, then, as we’ll see, under Duterte’s iron fist, the Phillipines should serve, at least in terms of the numbers, as a shining example of success. With that in mind, let’s take a look at Duterte’s lockdown and how well it’s worked for those under his thumb.

Beginning as early as March 15, those under 21 or over 60 were not allowed outside of their homes. Only one family member within the approved age range could go out for food and medicine. And there was an across-the-board curfew from 10 p.m. to 5 a.m. It was also mandated, of course, that everyone wear a mask everywhere out in public.

So we’re talking about a nation of over 100 million which underwent the longest and most severe lockdown… and which also had the highest rate of mask wearing in the world, according to an Imperial College of London survey.

(Also, while you’re at it, take a look below at what country had the least mask-wearers, according to the same survey.) 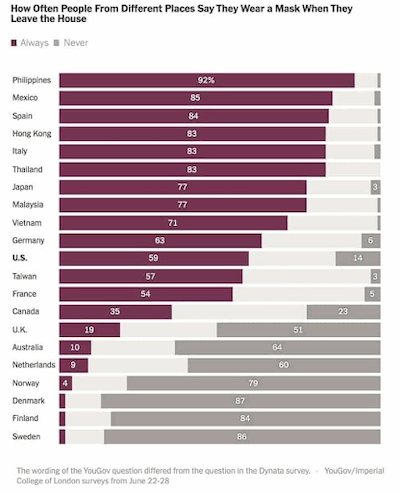 And yet, in what should’ve been a clue for mainstream journalists to probe deeper into whether or not strict lockdowns are actually working to keep people healthy and safe, the “confirmed cases” surged the moment the lockdowns eased.

Thus, the Philippines gives us a perfect example why tough, draconian lockdowns are especially futile. Not only did they have catastrophic second-order effects, they merely kicked the can down the road while leading to far more suffering for the population as a whole in the longer term.

And of course, here’s the testing rate, compared to the positives, which, for reasons we’ve outlined in great detail in past episodes, isn’t as widely reported. 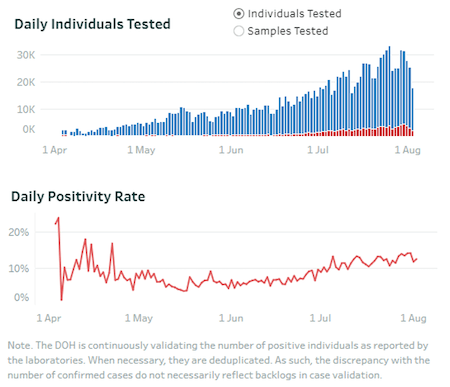 Clean Your Mask With Gasoline?

To fully understand the absurdity of Duterte’s unchecked leadership — one-size-fits-all absurdity, of course, being one fairly reliable quality in times of great tyranny — consider that in July he recommended Filipinos to, if they didn’t have access to rubbing alcohol, clean their face masks by washing them in kerosene. After public pressure, he backpedaled, but only a bit… and said Filipinos should not use kerosene, but gasoline, as an alternative to alcohol.

“What I’ve said is true,” he insisted when asked by the press if he was joking. “If alcohol isn’t available, especially for the poor, just go to a gasoline station and use [gas] to disinfect. I am not joking. You.. you try to get inside my brain… They said, ‘Duterte’s insane’ Stupid! If I’m insane, you should be the president, not me.”

In short, despite suffering under the cruelest and most absurd lockdowns, the Philippines, as of Sept. 20, had the largest number of COVID-19 cases in Southeast Asia, clocking in at 287,000. Now, as of Oct. 6, that number has jumped to 326,833, and with a death rate of 5,865 — the second largest number of COVID-19 deaths in Southeast Asia, after Indonesia, which reportedly has, upon writing, over 11,000. (We can’t help but wonder how many of those deaths in the Philippines, however, could be attributed to a chunk of his population huffing gasoline for days on end.)

At this rate, the Institute for Health Metrics and Evaluation (IHME), an independent global health research center at the University of Washington, has projected up to 53,000 Filipino deaths due to the coronavirus for the country by New Year’s Day.

Just last month, perhaps capitalizing on the dire news, Duterte extended his “State of Emergency” measures a year, until September 2021. During this time, officials, on top of being able to exercise almost total control over citizens, will also control the prices of basic commodities like rice and cooking oil.

So… did the draconian lockdown work? It depends on your definition of “success,” of course. But if the goal is to keep people safe and healthy, the answer is obviously, and predictably, no.

We’ve been told again and again that our problems in the United States stem from Americans not following the strict guidelines set in place. This problem, we’re also told, as the AP put it in August, “has been compounded by confusing and inconsistent guidance from politicians and a patchwork quilt of approaches to containing the scourge by county, state, and federal governments.”

And yet, in the Philippines, as Daniel Horowitz has noted in The Daily Beast, “There was no confusion or inconsistency there and certainly no lack of obedience. Just pure tyranny.”

And yet, it didn’t work.

Did Lockdowns Work at All?

Even more astounding is what the data looks like when we zoom all of the way out. As Jeffrey Tucker has pointed out in a piece he wrote for the American Institute for Economic Research, “Based on the data, there seems to be no relationship between lockdowns and lives saved. That’s remarkable, given that we know for sure that lockdowns have destroyed economies the world over.”

It’s no longer a secret, after all, that the vast majority of emotional, physical, psychological, and financial hardships now faced by citizens around the world are not due to COVID-19. They are due to the ongoing lockdowns, restrictions, and policies imposed by unaccountable and irrational public officials.

“When will we finally learn,” asks Horowitz, “that when you trade liberty for security, you achieve neither?”

And, yet don’t lose hope.

Cooler minds are showing signs of prevailing. Just this weekend, in fact, a declaration was formed in Massachusetts by three respected scientists… called the Great Barrington Declaration… which provides a glimmer of hope in a sea of insanity.