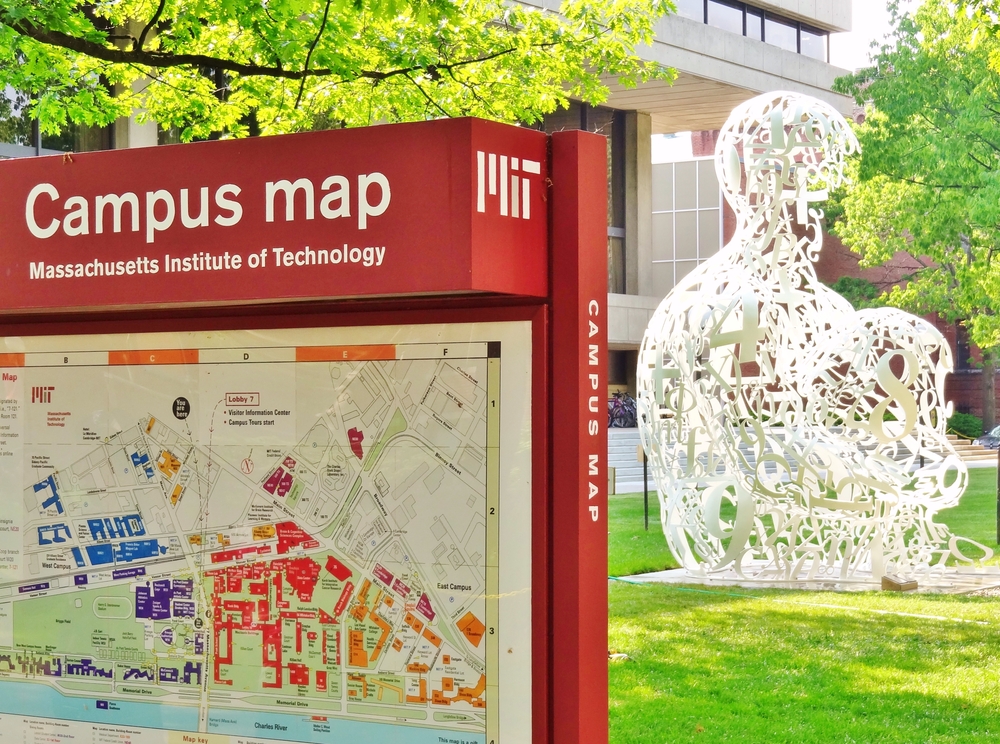 Marijuana Was the Hotdish at This Year’s Minnesota State Fair

The nice folks in Minnesota may be about to get a lot nicer, as growing support for marijuana legalization starts to grease the wheels of the government.

Last weekend, the Gopher State’s House and Senate conducted two separate polls to gauge Minnesota’s appetite for recreational marijuana (because it’s literally impossible for a House and a Senate to work together, no matter how “Minnesota nice” they may be).

The polls were conducted at the Minnesota State fair, in between the corn dog kiosk and the all-you-can-drink-milk-for-a-$1 stand. (I swear I heard the opening notes of the national as I typed that sentence.)

The Senate successfully polled 6,900 Minnesotans over the weekend, while the House’s surveyed 11,200 people. Not a bad turnout for an informal poll (but not surprising considering every single person from Minnesota was there that day).

The results of the two surveys were almost identical and signaled majority support for marijuana legalization. 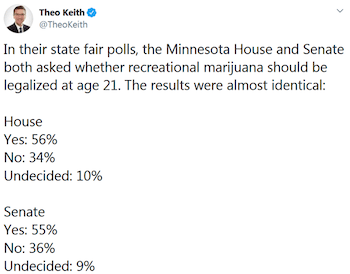 Theo Keith is the political reporter at FOX 9 (and probably name of some guy named Keith’s Dungeons & Dragons character).

The demographics surveyed in the report offer an even more compelling picture than majority support. The average age of those surveyed were 50 or older (because, you know, it was a survey conducted at a state fair).

Young people famously love weed (according to scientific polls and a moving picture I saw in 1936). So we can assume that actual support for legalization in Minnesota may be even higher than these surveys indicate.

Minnesota Governor Tim Waltz announced last week that state agencies are already preparing for a legal cannabis market: “[They] will have everything ready to go, and we will be able to implement it in Minnesota the minute the Legislature moves this,” said the governor. 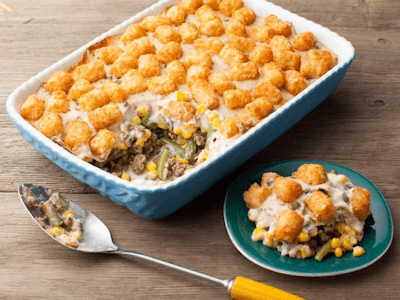 Hotdish: It’s unsurprising that a place whose state dish is hamburger meat covered in tater tots wants to legalize weed.

Whatever your personal feelings about marijuana, there’s never been a more exciting time to be investing in weed.

When the majority of Minnesotans over 50 are in support of legalization, you know the tides are shifting. (The only things Minnesotans agree on more than that are Prince, hotdish, and ice skating.)

This wave of legalization is a major boost for tiny pot stocks (and snack companies and the makers of SpongeBob Squarepants).

When shares exploded, eventually hitting more than $0.40 per share, a $500 investment would have handed you a $337,495 fortune (enough to keep you in hotdish for the rest of your life).

If you want to be alerted to explosive pot stock trade opportunities like this one, simply join Ray Blanco’s Pot Stock Millionaire Mastermind.

[Editor’s Note: Ray has to shut down this offer to join hisPot Stock Millionaire Mastermind Wednesday at midnight. So if you want in, you need to take action before then.]

Tourism in Hong Kong experienced its biggest drop on record this August, for reasons that would be obvious to everyone I assume.

You know, because getting your eye blasted out with a rubber bullet is just about the worst honeymoon you can have, next to Disneyland. (We get it, Jenny. You’re a whimsical, magical creature. I ain’t spending my honeymoon waiting in line and trying to get drunk off $18 “Frozen” margaritas.)

According to the city’s financial secretary, tourist arrivals fell 40% compared to last year. That’s the single worst decline since the city was dealing with a full-blown SARS virus outbreak that killed hundreds of people.

“The social events of the past few months — especially the continuous violent activities, blockage of airport and roads — have severely damaged Hong Kong’s image as a safe city, and a trade, aviation and financial hub,” said the financial secretary in a statement Sunday.

“It has also hit the local economy, with impact on the travel, retail and hospitality sectors being the most severe. The most worrying thing is that the outlook is not likely to turn around in the near future.”

For the last five months, pro-democracy protests and violent clashes with the police have brought the entire city to a standstill. Subway stations are frequently closed for hours due to tear gas and firebombs. (And it’s hard to really enjoy your Dim Sum when the police are smearing a Chinese teenager across the front of the shop.) 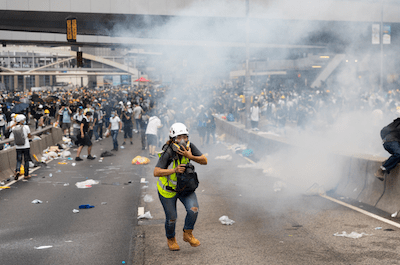 Come to beautiful Hong Kong and experience all the sights, sounds, and smells of a political revolution (tear gas, the sound of tear gas leaking from a grenade, and also tear gas).

According to the most recent figures, the tourism industry contributes about 5% to Hong Kong’s GDP and employs more than 250,000 people. Sustained interruption to the industry could take its toll on Hong Kong’s economy, which experts worry is already hurtling towards recession.

By the way, if any readers have been in Hong Kong since the start of the protests or had to cancel your travel plans because of them, I’d love to hear from you.

Click here to send me an email and tell me about your experience.

The director of MIT’s Media Lab stepped down over the weekend, after it emerged he accepted millions of dollars in donations from Jeffrey Epstein and taken steps to hide them (because, ya know, child sex trafficking and stuff).

According to a report in the New Yorker by Ronan Farrow, Joi Ito flew to Epstein’s weird sex island on at least two occasions and accepted more than $8 billion in donations from him — including $1.2 million for Ito’s own outside investment funds.

Now, Epstein donated a lot of money to the scientific community over the years. He was passionate about physics in particular. And many famous physicists, including Stephen Hawking, visited his island over the years.

However, many of these donations to MIT came long after the 2008 sex offender case in Miami, after which it was common knowledge that Jepstein was a monstrous sex homunculus. And Ito and his colleagues tried to conceal that fact.

In one bizarre email, Ito said a $2 million donation from Bill Gates (yes, that Bill Gates) has been “directed by Jeffrey Epstein.”

Ito’s colleague, Peter Cohen, responded to the email, saying that “For gift recording purposes, we will not be mentioning Jeffrey’s name as the impetus for this gift.” (The gift in this case being “the gift of not going to jail.”)

Ito stepped down as Director MIT’s Media Lab the day after the report, as well as relinquishing positions at the MacArthur Foundation, the John S. and James L. Knight Foundation, The New York Times Company, and Harvard. (It’s incredible what one man can accomplish with the backing of a billionaire sex trafficker.)

“After giving the matter a great deal of thought over the past several days and weeks,” Mr. Ito wrote in his resignation email. “I think that it is best that I resign as director of the media lab and as a professor and employee of the Institute, effective immediately.”

On Saturday, MIT’s president, L. Rafael Reif, said the university would hire an outside law firm to conduct “an immediate, thorough and independent investigation.”

Hopefully, this is just the first of many “indiscretions” that come to light as a result of the investigations into Epstein.

Now that Epstein is dead/(assassinated by a cabal of lizard people or whatever), the case against him has been dropped. But several civil cases against his estate and an ongoing criminal investigation in New York could potentially drag some of the worst offenders into the light.

You know, unless somebody just pays for all this to go away.

According to a survey of 1,000 Americans aged 25-45 (Gen X and Millennials: known collectively as the X-tremely Offended), healthcare is the number one financial worry for young Americans and it may be affecting their health.

Of those surveyed 39% said that financial stress had a negative impact on their health. Which is unsurprising, when you consider that some healthcare services can cost more than twice as much than any other wealthy country.

However, plain old “financial stress” wasn’t the only health concern highlighted in the survey.

Three in four of those surveyed young adults reported taking “risky” actions to save money on medical expenses, such as delaying treatment or pretending that weird rash isn’t there.

Many participants said this genius strategy only caused their illness to get worse. And, by the time they dragged their butts to the doctor’s office, they often left with higher medical bills, or worse, long-term medical problems.

Now, you might say it’s clearly all that Red Bull and avocados these young Americans are consuming. But these results line up pretty evenly with a similar study that was recently conducted on Americans over 50.

“Health care costs and related financial concerns are a common thread across multiple generations,” John Carter, president of Nationwide Retirement Plans and resident of Mars, said in a statement.

“In fact, our data illustrates a nearly universal truth when it comes to health care costs: these concerns last a lifetime.”