The Miracle on Brioche

T-Mobile’s merger with Sprint has been greenlit by a U.S. district judge, who I’m pretty sure was hitting on T-Mobile in his ruling.

Shares of Sprint (S) shot up more than 70% this morning after U.S. District Judge Victor Marrero approved the controversial merger and praised the raw “maverick” sexiness of wireless provider T-Mobile.

Marrero rejected the prosecution’s central argument that the merger would reduce competition, raise prices, and make my sucky internet worse than it already is.

“T-Mobile has redefined itself over the past decade as a maverick that has spurred the two largest players in its industry to make numerous pro-consumer changes,” said the judge, writing his phone number on a sheet of paper and sliding it across the table to T-Mobile.

“The proposed merger would allow the merged company to continue T-Mobile’s undeniably successful business strategy for the foreseeable future.”

Marrero, who is ready to take the concept of corporate personhood to its logical conclusion (the bedroom), also praised Sprint’s “valiant attempts” to remain competitive. But ultimately, he said, he was convinced that the struggling carrier had fallen too far behind the Big Three to remain viable.

The state has the option to appeal the judge’s ruling. But should the $26 billion deal go ahead, most Americans will have just three wireless providers to choose from. (And I already live in a major metropolitan area that’s only serviced by one of these providers. And yes, it’s the one that sucks.)

Central to the judge’s approval was the creation of a fourth wireless carrier that, with a little help from T-Mobile, would replace Sprint in the market. (Eventually. Maybe. Probably not but we need to pretend we care about competition a little.)

As part of the deal, satellite TV provider Dish gets Boost Mobile (currently owned by Sprint) and seven years of piggy backing on T-Mobile’s network to try and cobble together a wireless network of its own.

At the end of the seven years, Dish will emerge from its T-Mobile incubation as either a competitor or another Sprint, who can’t compete with the Big Three, despite “valiant attempts.”

Letitia James, New York’s attorney general, said that there is “no doubt” that the decision would be bad for consumers, workers, and innovation, and the states would be regrouping for now to lick their wounds and review their options.

Under the guidance of leather-clad CEO John Legere, a floundering T-Mobile cultivated that “maverick” sensibility that gets Judge Marrero all hot and bothered under the collar and became the No. 3 wireless provider in company.

But after the Sprint merger is complete, Legere will exit the company to work on his slow cooker recipes and probably look for a new company to rebuild from the ground up.

The question is if T-Mobile is still a Maverick without Legere, or is it a Goose?

At time of writing, all the major players in this case are surging in the markets, with T-Mobile (TMUS) up 11.5%, Dish (DISH) gaining 5%, and Sprint (S) skyrocketing 72%.

The U.S. has charged four members of the Chinese military with the 2017 Equifax data breach that exposed the personal information of millions of Americans (and reminded everyone that it’s dumb for private credit reporting agencies to exist in the first place).

The #Equihack was one of history’s largest data breaches that targeted consumer data. Though to be fair, we’ve only been hacking stuff for the last 50 years or so. Give us a few more years and some facial recognition software and we can get a real disaster of a privacy leak going.

“This theft not only caused significant financial damage to Equifax, but invaded the privacy of many millions of Americans, and imposed substantial costs and burdens on them as they have had to take measures to protect against identity theft.”

Of course, you probably don’t care if Xi Jinping knows your credit score (although he did ask me to tell Jeff Beans that “your credit score was very impressive and to keep up the good work”).

But the hackers also stole the names, addresses, Social Security numbers, and driver’s license numbers of 145 million Americans. (If you recently discovered the entire country of China has been impersonating you, this is why.)

With this data, Chinese military and intelligence can target and exploit vulnerable U.S. citizens and government officials and blackmail them to do shady spy stuff for the Chinese government.

There have been zero reported cases of this happening so far, according to the FBI. But that’s kinda how blackmail works, so it’s hard if the data has been used in this way so far.

The four hackers are suspected members of the People’s Liberation Army, a fun arm of the Chinese military that has long been suspected of cyber spying and cyber warfare. (And other cyber stuff.)

None of the accused hackers are actually in U.S. custody (because they are in China where they work as hackers for the Party). But AG Barr hopes the criminal charges will somehow serve as a symbolic deterrent to foreign hackers. 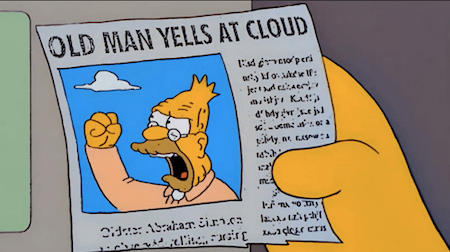 Sales at Popeyes restaurants surged 43% in the final three months of 2019 thanks to someone’s genius idea to put fried chicken between two pieces of bread.

The driving force behind the burst in sales growth was Popeyes’ new chicken sandwich; a sandwich apparently so good it caused the entire country to lose its god damned mind.

It’s just like the old witch told me I would die.

According to Restaurant Brands International, the chicken sandwich (which I must reiterate, is just chicken and bread) was Popeyes’ “biggest product launch in the last 30 years.”

It’s just like the old witch told me I would die.

In fact, according to Jonathan Maze, executive editor of Restaurant Business magazine, there isn’t a product on record that’s driven same-store sales as much as Popeyes’ stupid sandwich. 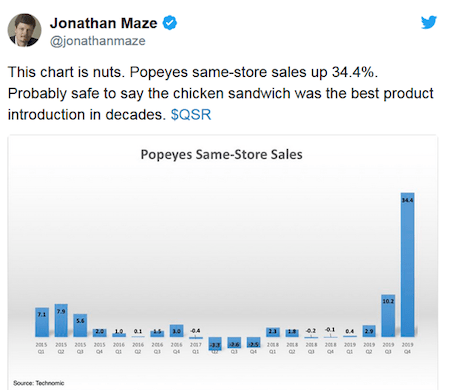 “Popeyes launched an iconic Chicken Sandwich has proven to be a game changer for the brand in every way,” said Restaurant Brands International CEO José Cil in a statement.

“For the vast majority of our guests purchasing the sandwich, we saw that they actually spent more on other products. The traffic driven by the demand of the Popeyes Chicken Sandwich helped drive growth in our entire menu.”

At the same time, Burger King delivered Restaurant Brands International its strongest year of restaurant growth in the last two decades. While Tim Hortons struggled to keep up, with sales dipping about 4% in the same quarter as Popeyes’ miracle on a brioche bun.

Today’s One Last Thing is another edition of our exceptional investors series, where I tap the best investors I know for their personal investing wisdom.

Today’s pearl comes from the author of the bestselling book The Everything Bubble, Graham Summers.

Graham’s beaten the market every year in the last decade. But according to the man himself, he was making it more difficult than it should have been.

Read on to discover how today Graham uses “second-level” thinking to plot his trades.

For years, my natural bias was to overweight risks and ignore opportunities in the markets. A big part of this was because I first made my name in the 2008 Crash, as one of the few analysts on the planet to predict a crash would hit months in advance.

Because of this, I usually looked for downside risks or issues in the markets. And while I’ve beaten the market almost every year in the last 10, I’ve made the process of making money a lot more difficult than it needed to be.

It was only when I began looking at how the market acted on a daily basis, minute by minute, that I began to notice new untapped opportunities for extraordinary profits.

Perhaps the biggest of my career was my discovery of a bizarre market anomaly that has the opportunity to produce double-digit gains in the scope of a few hours per day.

It all started when my personal trades kept blowing up in my face in early 2019. At that time, my personal bias was to short the market on mornings when it opened in the red. I was doing this because this strategy had worked extremely well in the past.

However, starting in early 2019, week after week this strategy resulted in these trades blowing up in my face.

What made these moves even more bizarre were that they were happening at roughly the same time of day (9:50AM-10:00AM EST). And as if that wasn’t odd enough, these violent rallies were occurring on almost NO volume, meaning that real investors were not driving them.

And this was happening almost every week.

I knew something BIG was going on in the markets. And I started digging deeper into this weird market phenomenon.

What followed was a labyrinthine journey into the guts of the financial system. It took several months, but after countless hours of research, I came to a startling conclusion.

I 100% believe the Fed is actively intervening in the stock market.

I don’t mean indirect interventions via rate cuts or quantitative easing (QE) programs… I mean that I believe the Fed is LITERALLY buying stocks directly to stop the stock market from falling.

And I’ve recently developed a proprietary trading research strategy to cash in on it.

It’s specifically designed to accurately predict when the Fed is pouring money into stocks using what I call “ghost money”.

Since its launch a few weeks back, this strategy has an amazing 100% success rate for subscribers…

Ghost Money Trader is the only system I know that tracks what I believe are massive Fed interventions in real time.

So you can get ahead of these major market moves before they happen.

Giving you the chance to pull thousands of dollars from the stock market every week.

I’m convinced that this is the easiest and most profitable trading strategy in the world.

Just act when my “ghost money” system triggers in the morning… and then get out with thousands in potential profits by lunchtime.

You can receive the full rundown in Ghost Money Trader… and have the chance to get in on the next opportunity for potential profits at the link below.

As soon as you subscribe, you’ll receive my next urgent “ghost money” trade alert I release with the help of my system.

A new opportunity is set to signal at any time…