The Fourth Turning & the Phoenix

“History is seasonal, and winter is coming. Like nature’s winter, the saecular winter can come early or late. A Fourth Turning can be long and difficult, brief but severe, or (perhaps) mild. But, like winter it cannot be averted. It must come in its turn.”
– William Stauss and Neil Howe (1997)

Civilizations rise and fall. Economies boom and then collapse. Communities unite and then splinter. Individuals experience countless peaks and valleys throughout their lives.

To understand that all things move in cycles is, according to the ancients, the key to unlocking a vast storehouse of wisdom, luck, and indeed fortune.

To be ignorant of this inescapable fact is the root of all misfortune, folly, and hubris.

Our ancient ancestors, without yet the luxury of written language, compiled such wisdom into stories… into myth.

And out of these mythologies –– all over the world –– we discover repeating archetypal themes.

These archetypal themes are, to put it into modern lingo, the “source code” of human nature.

They are the consistent motifs out of which our conceptual minds have evolved.

And if there’s one myth which touches nearly all doctrines, cultures, and origin stories on planet Earth –– it’s the phoenix.

According to the legends, the phoenix lives for hundreds of years until it builds itself a beautiful pyre, sets itself aflame, and rises out of the ashes reborn and made anew.

And it points to the timeless truth that we are constantly –– individually and as a race of beings –– going through cycles of death and rebirth.

Source: Made by Mooney

With every rotation of the cycle, a part of us dies, and something else –– a new interest, sentiment, paradigm, or direction –– is born.

(And, of course, it’s always the case that the new paradigm could hardly have been predicted with conventional thinking.)

We Stand On the Edge

That is precisely where we stand today. At the end of a cycle.

This is akin to what Neil Howe has called “The Fourth Turning,”  who prophetically penned, in 1997, in the book of the same name:

“History is seasonal and winter is coming. The very survival of the nation will feel at stake. Sometime before the year 2025, America will pass through a great gate in history, commensurate with the American Revolution, Civil War, and twin emergencies of the Great Depression and World War II.”

The Old Guard itself is the bubble.

And the virus is the pin.

(And, yes, the former is losing control of the narrative. But more on that tomorrow.)

In his book, Symbols of Transformation, Carl Jung explained that human beings have much in common with the phoenix.

It is, he says, a symbol of the power of resilience…

And the innate capacity to rise out of the ashes of our former selves and evolve into something greater.

Viktor Frankl, author of Man’s Search For Meaning, who survived immense torture and deprivation during the Nazi regime, would certainly agree.

In Frankl’s books, he detailed the harmful effects brought about by traumatic and difficult experiences in himself and his patients.

Though any traumatic experience itself is always negative, what individuals do with those experiences, he wrote, is a choice.

(Which is precisely why the Western glitterati’s fashionable “Victim Olympics” creates dastardly incentives and weakens the human spirit, imagination, and ingenuity.)

As the Exploring Your Mind blog puts it:

“It’s in our hands whether we want to stand up again, come back to life once more out of our ashes, in an astonishing victory. Or, on the other hand, to just sit and stew, to crumble…”

This inherent ability to find strength from difficult times –– to sharpen our swords with our suffering –– is something you’ve probably experienced in the past.

Scratch beneath the surface and perhaps you’ll see those that you admire –– those who have been through hell and back –– aren’t strong despite the horrible inflicted upon them… but because of it.

And the phoenix is one worthy motif to meditate upon in times of transition.

To help with that, we invite our friends at Classical Wisdom to rap about the ancient symbolism of the magical phoenix.

Indeed, meditate on this ancient symbol… and explore what it means for your own life.

Out of the old the new is born.

(Unfortunately, the birthing process is a bit of a doozy.)

[Ed. note: Sometimes, to secure a better future, you have to peel back the past. You have to understand what has been forgotten, as there’s often, as it has been said, nothing new under the sun. If you (like me) get excited by the prospect of using ancient wisdom to deal with today’s crises –– and rediscovering the roots of our own modern minds in ancient ideas –– then you’re in good company. Our friends at Classical Wisdom have recently released the ancient antidote to today’s crises, called “The Essential Greeks”. If interested in using the next few weeks wisely, we’ve secured a special deal just for LFT readers –– all the details are right here at this page.]

Ancient Symbolism of the Magical Phoenix

The symbolism of the Phoenix, like the mystical bird itself, dies and is reborn across cultures and throughout time.

Ancient legend paints a picture of a magical bird, radiant and shimmering, which lives for several hundred years before it dies by bursting into flames. It is then reborn from the ashes, to start a new, long life. So powerful is the symbolism that it is a motif and image that is still used commonly today in popular culture and folklore.

The legendary phoenix is a large, grand bird, much like an eagle or peacock. It is brilliantly coloured in reds, purples, and yellows, as it is associated with the rising sun and fire.

Sometimes a nimbus will surround it, illuminating it in the sky. Its eyes are blue and shine like sapphires. It builds its own funeral pyre or nest, and ignites it with a single clap of its wings. After death it rises gloriously from the ashes and flies away. 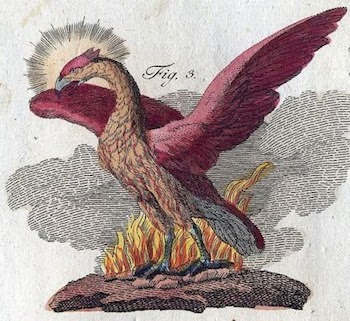 Image: Phoenix rising from the ashes in Book of Mythological Creatures by Friedrich Johann Justin Bertuch (1747–1822)

The phoenix symbolizes renewal and resurrection, and represents many themes, such as “the sun, time, the empire, metempsychosis, consecration, resurrection, life in the heavenly Paradise, Christ, Mary, virginity, the exceptional man”.

Tina Garnet writes in The Phoenix in Egyptian, Arab, & Greek Mythology of the long–lived bird, “When it feels its end approaching, it builds a nest with the finest aromatic woods, sets it on fire, and is consumed by the flames. From the pile of ashes, a new Phoenix arises, young and powerful. It then embalms the ashes of its predecessor in an egg of myrrh, and flies to the city of the Sun, Heliopolis, where it deposits the egg on the altar of the Sun God.”

There are lesser known versions of the myth in which the phoenix dies and simply decomposes before rebirth.

The Greeks named it the Phoenix but it is associated with the Egyptian Bennu, the Native American Thunderbird, the Russian Firebird, the Chinese Fèng Huáng, and the Japanese Hō–ō.

It is believed that the Greeks called the Canaanites the Phoenikes or Phoenicians, which may derive from the Greek word ‘Phoenix’, meaning crimson or purple. Indeed, the symbology of the Phoenix is also closely tied with the Phoenicians. 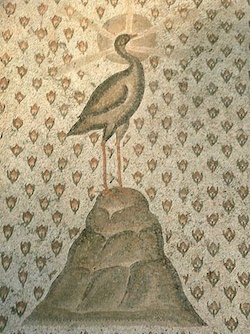 Phoenix and roses, detail. Pavement mosaic (marble and limestone), 2nd half of the 3rd century AD. From Daphne, a suburb of Antioch–on–the–Orontes (now Antakya in Turkey). Image source: Wikimedia

Perhaps the earliest instance of the legend, the Egyptians told of the Bennu, a heron bird that is part of their creation myth. The Bennu lived atop ben–ben stones or obelisks and was worshipped alongside Osiris and Ra. Bennu was seen as an avatar of Osiris, a living symbol of the deity. The solar bird appears on ancient amulets as a symbol of rebirth and immortality, and it was associated with the period of flooding of the Nile, bringing new wealth and fertility.

Greek historian Herodotus wrote that priests of ancient Heliopolis described the bird as living for 500 years before building and lighting its own funeral pyre.

The offspring of the birds would then fly from the ashes, and carry priests to the temple altar in Heliopolis. In ancient Greece it was said the bird does not eat fruit, but frankincense and aromatic gums. It also collects cinnamon and myrrh for its nest in preparation for its fiery death.

In Asia, the phoenix reigns over all the birds, and is the symbol of the Chinese Empress and feminine grace, as well as the sun and the south.

The sighting of the phoenix is a good sign that a wise leader has ascended to the throne and a new era has begun. It was representative of Chinese virtues: goodness, duty, propriety, kindness and reliability.

Palaces and temples are guarded by ceramic protective beasts, all led by the phoenix.

The mythical phoenix has been incorporated into many religions, signifying eternal life, destruction, creation and fresh beginnings.

Due to the themes of death and resurrection, it was adopted as a symbol in early Christianity, as an analogy of Christ’s death and three days later, his resurrection.

The image became a popular symbol on early Christian tombstones. It is also symbolic of a cosmic fire some believe created the world and which will consume it. 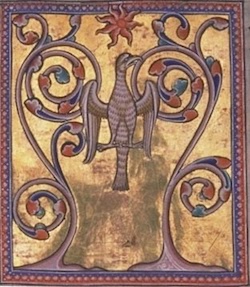 A reborn Phoenix. A ventral view of the bird between two trees, with wings out stretched and head to one side, possibly collecting twigs for its pyre but also associated with Jesus on the cross. Image source: Wikimedia

In Jewish legend the phoenix is known as the Milcham — a faithful and immortal bird. Going back to Eden, when Eve possessed the apple of knowledge, she tempted the animals of the garden with the forbidden fruit. The Milcham bird refused the offer, and was granted for its faith a town where it would live in peace almost eternally, rebirthing every thousand years, immune to the Angel of Death.

The Phoenix is also an alchemical symbol. It represents the changes during chemical reactions and progression through colors, properties of matter, and has to do with the steps of alchemy in the making of the Great Work, or the Philosopher’s Stone.

Modern additions to the myth in popular culture say the tears of the phoenix have great healing powers, and if the phoenix is near, one cannot tell a lie.

Continually morphing and remorphing, the phoenix represents the idea that the end is only the beginning.

Much like this powerful myth, the symbol of the phoenix will be reborn over and over again in human legend and imagination.

[Ed. note: If you like this, and want more ways to rediscover our roots, consider starting a new adventure into the ancient world. Our friends at Classical Wisdom have recently released the ancient antidote to today’s crises, “The Essential Greeks” course. If interested, we’ve secured a special deal just for LFT readers –– all the details are right here at this page.