[Publisher’s Note: With coronavirus fears mounting over the past week, stocks have fallen at a faster pace than any time in history. Yesterday’s decline was the largest one-day drop since the 1987 crash. Whether it’s due to overblown media hype or not doesn’t matter. The market hates uncertainty. That’s why I called each of our expert editors this week – to provide some much-needed clarity. Click here to listen in. Next week, we’ll hear from 10x trading champion Chuck Hughes. Plus, we’re getting former CIA officer Jason Hanson on the line, who can offer helpful tips for keeping you and your family safe if a potential crisis scenario emerges.]

The New York Federal Reserve announced a $1.5 trillion-dollar injection of extra short-term funding, fueling a surge in stocks OH WAIT NO IT’S GOING THE OTHER DIRECTION GOSH DARN IT NO WHAT DID YOU DO, FELLAS?

During one of the worst days in the markets in decades, the Fed announced a $1.5 TRILLION repo operation as well as a new quantitative easing (QE) program to alleviate some of the pressure in the markets.

“These changes are being made to address highly unusual disruptions in Treasury financing markets associated with the coronavirus outbreak,” the New York Fed said in its announcement.

Jerome and his buddies at the Fed enacted the first step of their cunning plan yesterday, ploughing $500 billion in cash into the treasury market. And it actually worked… for about five minutes.

After a brief respite, the markets crashed, suffering their worst one-day collapse since 1987’s Black Monday crash. (You know, we’ll probably have to name yesterday’s crash now. How about Coronavirus Thursday or Fed Appreciation Day?) 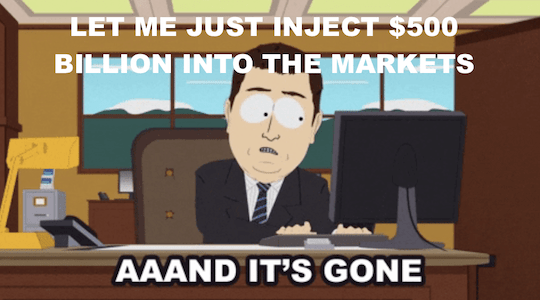 At closing bell, the markets were down over 20% across the board with some indexes having wiped out all of their gains going back to the 2016 election. (It’s like a time machine for our portfolios. But instead of fun hijinks, it just makes us poorer.)

“If bonds cannot find a floor when the Fed announces QE 5 as well as $1.5 trillion in repos, then we have a problem that is far, far greater than anything the world has ever seen.”

The market wasn’t quite sure how to react today, briefly rallying in the morning and crashing in the afternoon, before staging a much-needed recovery at session’s close. All told, the Dow gained 9.31%, the S&P 500 advanced 8.98%, and the NASDAQ took home 9.87%.

Airbnb bookings are tanking in major cities worldwide as the whole “sleeping in a stranger’s bed” thing takes on a new light in the age of coronavirus.

Coronavirus hotspots like South Korea, Seoul, and Italy are being hit the hardest, according to Airbnb analyst AirDNA. (I guess all those millennials who say they “love travel” and “want to die” were full of it.)

Airbnb is just starting to see the impact of the virus in the U.S., as folks were kinda pretending the whole pandemic thing wasn’t happening until now. New York bookings dropped 21% for the same period.

Airbnb is declining to comment on the AirDNA research. But in a statement on its website the company said: It’s a pandemic, guys! No one wants to fly to Italy to stay in some widow’s spare bedroom right now! Did you really need a statement to tell you that?!

“The Coronavirus outbreak is causing travel restrictions and other disruptions that have a direct impact on the travel and tourism sector and beyond,”

“Although nobody can know the extent of the impact that the Coronavirus outbreak may have, we believe that history shows that when global disruptions happen, the travel industry has bounced back in the long run.”

The soulless corporate statement is right of course. The travel industry will bounce back “in the long run.” (Unless we go full Mad Max and burn civilization to the ground in the next few weeks.) But it remains to be seen if Airbnb has the fuel in the tank to run “the long run.”

According to an investigation by Bloomberg (the news site, not the guy who charged homeless people rent while he was mayor), Airbnb’s losses almost doubled in Q4 of 2020.

And that was before the coronavirus pandemic jammed a bloody mop handle in the rusty spokes of the global travel industry. (Yes, I have been binge reading sexy murder mysteries while in quarantine, why do you ask?)

Airbnb privately reported a loss of $276.4 million, compared with a loss of $143.7 million a year earlier, according to “a person familiar with the company’s accounts.”

Airbnb, always aloof and unapproachable, declined to comment on the perturbation figures, as it is wont to do. (Yes, I have been binge reading Jane Austen while in quarantine, why do you ask?)

Airline Stocks in a Tailspin

Airline stocks barrel-rolled into a flock of geese yesterday in anticipation of President Trump’s travel ban.

The measure, which will go into effect later tonight and will last 30 days (and 30 nights), bans travel from the 26 European countries in the Schengen Zone. (Which is either a region through which Europeans can travel freely without a passport or visa, or a battle cage I’m building for the coming fall of civilization.)

Year-to-date, the index has nosedived 40%, as the prospect of spending hours in a tube with hundreds of wet, breathing mouths loses its luster in the age of coronavirus.

“However bad you thought it was, it’s worse,” said Cowen analyst Helane Becker in a note Thursday, MarketWatch reports.

“We continue to believe near-term U.S. bankruptcies are unlikely but our conviction is diminishing. Airlines are in cash preservation mode.”

The reduction in labor costs and maintenance expenses as a result of not flying any planes, should stem the flow of cash in the near term. And the lower fuel costs (thanks to the Saudis and Russians playing chicken with the global market) should alleviate some of the pressure.

Whether or not airlines can rough it out will depend on 1) liquidity and 2) how long this whole global pandemic thing will last.

“The important thing is that people are still traveling, airlines are still selling tickets,” Moody’s Investors Service Jonathan Root, lead airline analyst, told MarketWatch.“All roads lead back to what’s the duration of the virus being with us?”

One Last Thing for Your Ears

Well folks, the time has finally come to reveal the secret project we’ve been working on for the last few months.

I had hoped to perhaps launch this at a more auspicious moment. But hey, if a complete market meltdown isn’t One Last Thing I don’t know what is.

Starting today, and every Friday from here on out, you will be getting the One Last ThingPodcast Edition. (It’s One Last Thing but for your ears.)

The podcast edition will function much like the Saturday “Best of the Last” newsletters. It’ll be a weekly update of the biggest money moving stories of the week. But you instead of having to read it (like a nerd), I’ll read it to you.

It’ll work just like any podcast, so you can take me to the gym, or on a drive, or listen to me while you do that weird thing you do to decompress at the end of the week (no judgement).

You can listen to the first episode here on Spotify or search your preferred podcast app for “One Last Thing by Shane Ormond.” We’re still waiting on approval for iTunes but it’s in the hopper.

Shoot us an email to let us know what you think, make fun of my accent, or tell us if there’s a podcast app you use that we’re not on.