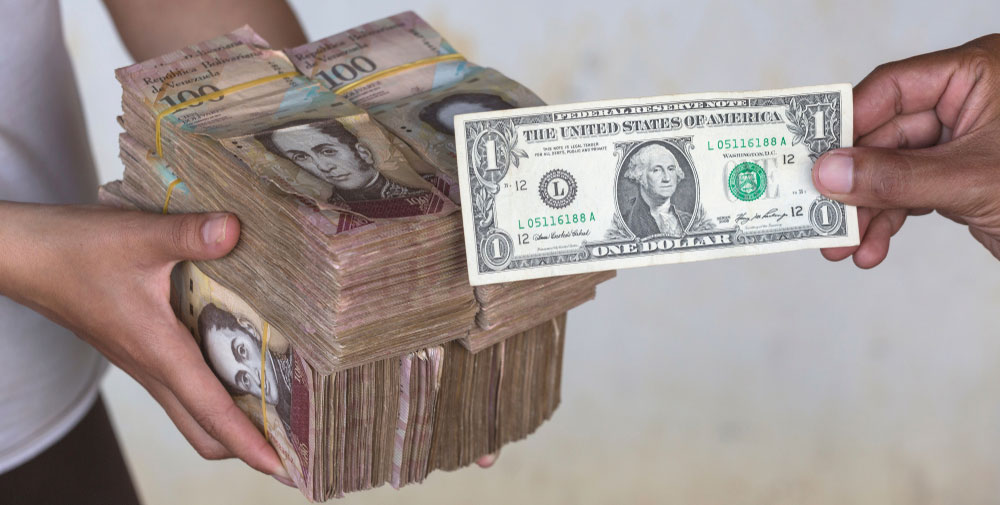 Today’s Money & Crisis is a tale of two presidents.

Well, technically it’s a tale of one president and one illegitimate usurper.

Who is the real president, and who is a fake, is up for debate.

Nicolás Maduro was reelected Venezuela’s president for another six years in May 2018. He controls the government, and the military backs his claim to power.

JuanGuaidó, a relatively unknown, stood in the streets of Venezuela’s capital last week and declared himself “acting president.”

On the surface, this may seem like a cut and dry case.

But we need to rewind a little and dive into the ongoing financial crisis in Venezuela to really see what’s going on.

Lose 20 Pounds on the Maduro Diet

Maduro, a former bus driver and union leader, was first elected in 2013 after the death of his mentor Hugo Chávez.

Maduro won with a slim margin of just 1.6%. So he had a lot to prove when he came into office. If his performance wasn’t exceptional, the chances of getting re-elected in 2018 would be slim.

Under Maduro’s socialist leadership, the country’s economy went into freefall.

The annual inflation rate skyrocketed, hitting 1,300,000% at the end of 2018. And according to the International Monetary Fund, Venezuela’s inflation could go as high 10 million percent by the end of the year.

As it stands, prices are doubling on a weekly basis.

“We have to buy as soon as we get our paycheck,” Caracas resident Belkys Bolivar told NBC News. “We don’t know if we’ll be able to afford things next week.”

In March of last year, a months’ wages would buy you two liters of milk, four cans of tuna, and a loaf of bread in the capital of Caracas.

The situation has become so dire, Venezuelan’s are shedding pounds faster than they can buy food.

Since Maduro has taken power, the average Venezuelan has lost about 20 pounds. Folks are calling this the effect of “The Maduro Diet.”

The people are furious. And they believe Maduro is to blame for all their problems.

So imagine their surprise when Maduro took last year’s election in a landslide victory.

How could Maduro possibly have won the election?

He jails, exiles, or disqualifies anybody who could oppose him.

Last year, every single one of Venezuela’s most popular opposition leaders just so happened to be “unavailable” to run for election.

Henrique Capriles, Maduro’s most popular rival, was barred for “mishandling of donations.”

Freddy Guevera, a 31-year-old former student, was forced into hiding for fear of arrest.

So when Juan Guaidó stood out in the street and declared himself president, it didn’t come out of nowhere.

Guaidó, and many of the Venezuelan people, believe that Maduro’s reelection was unconstitutional. This means that the presidential seat is technically vacant.

And according to Venezuela’s constitution, the presidency should fall to the President of the National Assembly. Who just so happens to be a little-known politician named… Juan Guaidó.

“Hola, My Name is Mike Pence”

Just moments after “the incumbent” staked his claim, the White House weighed in, officially recognizing Guaidó as Venezuela’s president.

“On behalf of President Donald Trump and all the American people, let me express the unwavering support of the United States as you, the people of Venezuela, raise your voices in a call for freedom.”

“Nicolás Maduro is a dictator with no legitimate claim to power. He has never won the presidency in a free and fair election, and has maintained his grip of power by imprisoning anyone who dares to oppose him.” 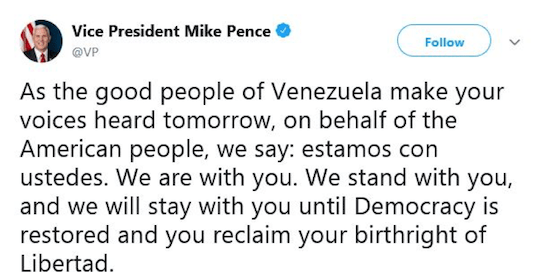 In response, Maduro severed diplomatic ties with Washington and gave U.S. diplomats in country 72 hours to pack their bags and get the heck out of dodge.

Now, the majority of the Venezuelan people stand behind Guaidó. He’s untested. But at this point, anything is better than Maduro.

Unfortunately, Venezuela’s substantial military of 500,000 has backed Maduro’s administration. That could change in the coming days, as unrest grows in the streets.

I find it hard to believe that nobody in the military sympathizes with the plight of the Venezuelan people. But there are likely layers of corruption at play here that have yet to be revealed.

Uncertainty is the prevailing feeling here. We could be looking at a civil war. The rise of a dictator. Or a military coup that instills an, as yet, unseen player in the presidency.

Of course, there’s one more option. Since the beginning of his presidency, Trump has been loudly critical of Maduro’s regime… and has floated the idea of a U.S. invasion of Venezuela in the past.

U.S. generals have warned that intervening could be disastrous for the U.S. If we play this wrong, we could end up in another decade-long conflict in foreign territory — which goes directly against Trump’s anti-interventionist policies.

Of course, the alternative is to do nothing… and potentially let the people of Venezuela to suffer at the hands of a dictator for years to come.

The decision is not an easy one.

In tomorrow’s issue of Money & Crisis, we’re going to hear from a chess grandmaster on thinking five steps ahead before deciding to intervene overseas.