The Empire State Strikes Back

Gold is Headed Back to the Empire State

Gold is flooding into New York at unprecedented levels, as US investors seek out the comforting glow of their old yellow friend in these trying times.

More than 20 million troy ounces of humanity’s favorite metal (to make half-naked statues of themselves with) have landed in New York over the last three months, almost tripling the state’s total store of gold. 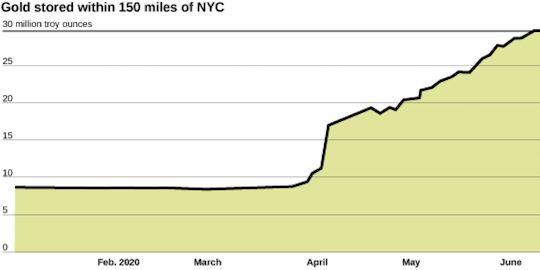 The massive influx of the primary cause of back pain in Mr. T is being driven partially by demand for a safe store of wealth at a time when nothing seems safe or certain or even just a little bit okay.

At the heart of the NYC pandemic gold rush, however, is one of the most dangerous and powerful forces in economics. It’s overthrown governments, crashed economies, brought entire empires to their knees, and broken up the greatest band of all time, Fleetwood Mac.

It’s a little thing called “oh, we didn’t think that.”

Gold sellers use New York’s COMEX to buy and sell gold futures, while the vast majority of the physical bullion is stored in jolly old England.

In regular non-apocalypse scenarios, traders can confidently sell their gold futures knowing banks can easily fly gold from Europe to New York to deliver against COMEX futures to correct prices.

But that convenience doesn’t exist in a world where airline travel has all but stopped, and the few flights that are being made have reserved their cargo space for emergency medical supplies.

On a single day in March, HSBC Holdings booked a $200 million paper loss due to the logistical problems in the gold market. (You may not know this, but banks do not typically like losing money.)

Almost immediately, banks all around the world started chartering private flights and shipping as much gold as possible to New York, flooding its vaults with enough of the yellow metal to make 6,039 solid-gold toilets. (This is the only math I’ve ever enjoyed doing.)

“The flow of gold from the East to the West has been to levels no one has seen in the past,” Frederic Panizzutti, managing director of trading and refining MKS PAMP Group, told the Wall Street Journal, making no mention of how many gold toilets that would be.

Amid the chaos of the global markets, gold prices have climbed almost 15% this year. Which is why investors, from regular Joe’s to billionaire Joe’s like Paul Tudor Jones and Jeffrey Gundlach, have been flocking to gold.

“I think one of the best trades is gonna be gold,” Paul Tudor Jones told Bloomberg Marketsin an interview on June 12. “If I had to pick my favorite [bet] for the next 12 to 24 months, it’d probably be gold.”

Not sure how to start investing in gold? Simply click here to open your free SmartMetals account and invest in real gold, silver, platinum, and palladium right from the comfort of your own home.

Smart metals is provided, free of charge, by our buds at the Hard Assets Alliance. They are the only precious metals providers we trust; so much so we bought a stake in the platform. (Which means, full disclosure, if you benefit from their services, so do we.)

Worst Day on the Markets Since Beginning of Pandemic

Stocks suffered their largest single day loss in three months, as the possibility of a second wave of the virus rears its ugly head. (I apologize for ugly-shaming the virus, but have you seen that thing? Even Charlie Sheen wouldn’t know where to kiss it.) 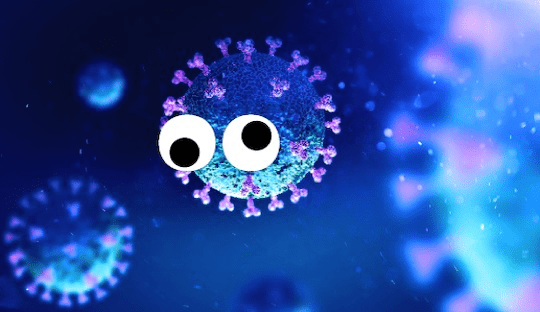 The markets logged their single worst day since March 16, when the coronavirus tossed a bag of crap at the ceiling fan, and they all lost more than 11%.

After a prolonged and somewhat baffling rally, investors got a cold hard dose of reality after 21 states reported a rise in cases of the virus this week. (The coronavirus. Remember that thing?)

“The sense is maybe the market got ahead of itself, which makes sense given the fact that we’ve come so far so fast. The reality is this thing’s going to linger longer than probably the market had anticipated.

Investors jumped ship on cruise operators, airlines, and retailers, as the possibility of a swift recovery without a vaccine road off into the sunset on a horse made of bad decisions and a lack of planning.

Shares of all the major US airlines dropped more than 11%. While cruise operators Carnival Corp. and Norwegian Cruise Line fell more than 15% each, as everyone remembered how much it sucked being stuck on a cruise ship overrun with coronavirus.

A Tsunami of Evictions

The US is careening towards an avalanche of evictions in the coming months, as protections for those who lost their jobs during the pandemic run out, despite the ongoing health risks.

Even before this whole Apocalypse Light took hold, the US was in the midst of, what experts refer to as, a national eviction crisis. Each year more than 2 million Americans are kicked out onto the streets. And that figure is expected to spike dramatically in 2020.

More than 40 million Americans lost their jobs when the hell mouth opened and all the bad spilled out. While some of those jobs will return, an inordinate of work has been wiped out by closures and bankruptcies.

The unemployment rate is expected to remain high for the rest of 2020 and probably won’t fully recover for at least another two years. And who knows what will happen if there’s a resurgence of the virus? (I’m going to guess NOT GOOD THINGS.)

Despite that, the $600 unemployment stimulus, which is paying most folks’ rent right now, will run out at the end of July. As will the moratorium on evictions put in place by states to protect folks from being tossed out into the street in the middle of our Diet Ragnarok.

According to Princeton University’s Eviction Lab (which doesn’t sound like a very fun place to work), thousands of tenants have been missing rent payments, which will be due as soon as the moratoriums are lifted, resulting in a cascade of evictions.

According to Aaron Carr, founder and executive director of the Housing Rights Initiative, mass evictions during a pandemic could spread the virus rapidly and turn “a catastrophe into an apocalypse.”

“A lot of people could be on the streets,” Carr told CNBC. “Especially in places like New York City that already have a homeless problem, it could turn into a homeless nightmare.”