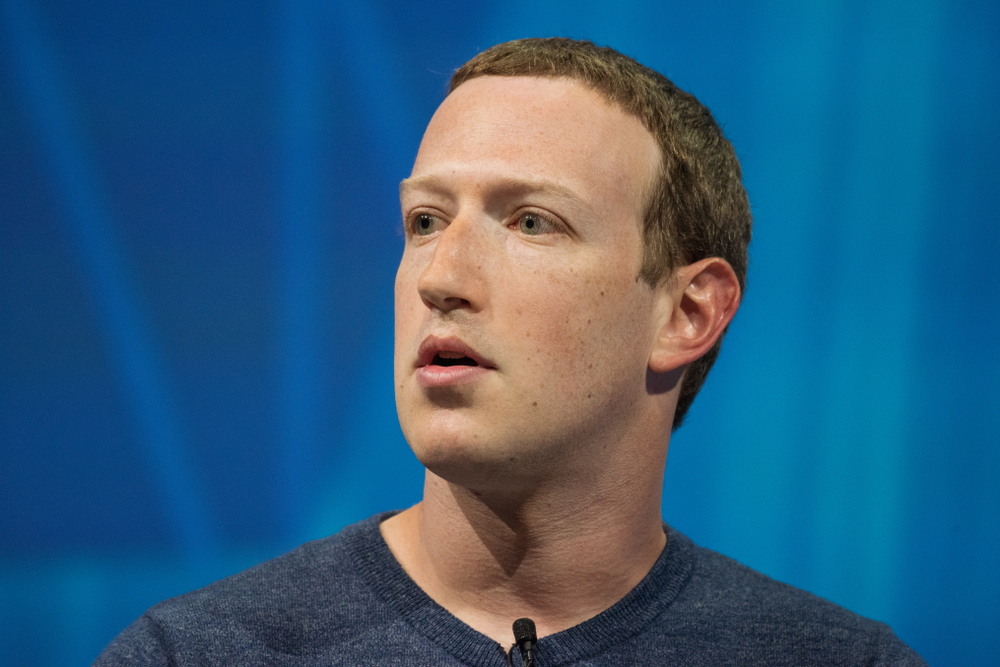 The Biggest Fine in Tech History

And Why It Doesn’t matter

The FTC slapped Facebook with the largest fine ever imposed on a tech company. (And it changes absolutely nothing.)

As part of the settlement, Facebook agreed to pay out $5 billion for its role in allowing Cambridge Analytica to access the private data of more than 87 million people.

(It irks me to know that a British political consulting firm has all my drunk photos. They could do anything with them. Like a collage. Or maybe a video montage set to an Imagine Dragon’s song.)

Five bill is a tidy sum of money for the likes of you and me. But for Facebook, that record-breaking amount is a proverbial drop in a proverbial bucket. (This issue of One Last Thing is brought to you by Aesop’s Proverbial Buckets. “A man is known by the bucket he keeps!”)

$5 billion amounts to less than 10% of Facebook’s revenue in 2018. And I’d bet my last shred of privacy it’s far less than the amount of money the company has made over the years peddling your private data to third-parties like Creepybridge Manipudata.

The settlement includes a provision that Zuckerberg has to pinky promise he won’t violate the privacy of 87 million people ever again. And he’ll have to make quarterly reports to the FTC to acknowledge that “yes daddy, I’ve been a good boy.”

An independent third-party assessor will be appointed by the FTC to conduct biennial (every two years. Terrible word. Let’s get rid of it) assessments to make sure Zuckerberg isn’t lying (he will be).

Per the settlement, Facebook must notify the oversight committee within 30 days of discovering that data of 500 or more users has been compromised (but if the data of 499 people has been breached, all good).

In an interview with CNBC, FTC Commissioner Rohit Chopra, who voted against the deal, said the FTC did not investigate enough.

“I wanted to investigate further, really uncover what was on the executives’ and the directors’ minds, who was calling the shots, what was their motives,” said Chopra. “If we don’t even get those answers, how are we going to really know what really happened?”

Commissioner Rebecca Kelly Slaughter (who was born with the name of a monster truck) said $5 billion won’t make Facebook think twice about doing this again and took issue with the lack of personal accountability for Facebook’s executives.

“While it is difficult in this case to quantify the economic value of the violations to the company, there is good reason to believe $5 billion is a substantial undervaluation,” said Slaughter in a statement released yesterday.

“The fact that Facebook’s stock value increased with the disclosure of a potential $5 billion penalty may suggest that the market believes that a penalty at this level makes a violation profitable.”

“I would have preferred to name Mr. Zuckerberg in the complaint and in the order. I disagree with the decision to omit him now, and I strenuously object to the choice to release him and all other executives from any potential liability for their roles to date.”

In its own statement, the FTC disagreed with the impact of the penalty, arguing that “$5 billion is a big number, look at all those zeros, guys! Wow, so big.”

“The magnitude of this penalty resets the baseline for privacy cases — including for any future violation by Facebook — and sends a strong message to every company in America that collects consumers’ data: where the FTC has the authority to seek penalties, it will use that authority aggressively.”

What do you think? Will this decision put the wind up big tech’s skirt? Or did the FTC just put a price on U.S. citizen’s data?

Click here to email me your thoughts and we’ll feature the best in the Readers’ Comments section.

Coffee and sad-looking-sandwich slinger Dunkin’ (DNKN) announced a partnership with plant-based meat-maker Beyond Meat (BYND) yesterday, triggering a surge in both stocks.

The partnership will take the form of a meat-free sausage sandwich, which was rolled out in Dunkin’s Manhattan “restaurants” yesterday.

(I put restaurants in quotes because the Dunkin’ near the One Last Thing HQ could be more accurately described as a “rat nursery.” Good breakfast sandwiches though.) 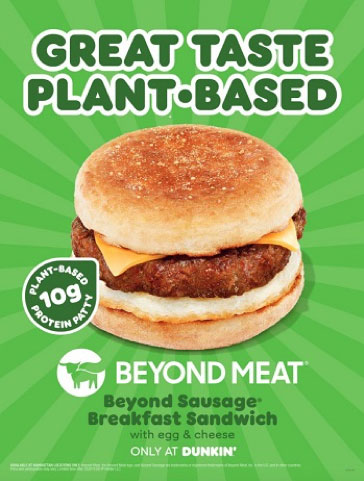 The artist-formerly-known-as-Dunkin Donuts’ is hoping to attract a younger, cooler audience with these not-sausage sandwiches.

For Dunkin’ CEO David Hoffmann, it’s the natural next step in a years-long effort to move away from the company’s image as a dirty donut for rats and rebrand itself as a hip coffee and breakfast sandwich joint (that also happens to sell sackloads of donuts for pennies on the dollar).

According to Business Insider (which is where I get all my food reviews), the not-sausage is indistinguishable from the rest of the delicious slop on Dunkin’s breakfast menu.

“Biting in, the Beyond “sausage” is juicy, salty, and well seasoned, melding nicely with the gooey American cheese and practical English muffin,” wrote Kate Taylor, who obviously didn’t have much going on today.

Both companies enjoyed a bump in the stock market yesterday with DNKN closing 1.56% up and BYND banking a 3.81% jump in market value. BYND continued to rise today, gaining about 3% in the morning trade.

Nobody Saw This Coming

Nobody expected the fake meat guys would be the breakout star of this year’s glut of IPOs. But since the stock debuted in May, it’s returned gains of more than 150%.

Nobody, absolutely nobody, could have predicted it… or could they?

In secret, one of our top researchers has developed an entirely new way of trading.

It took him over a year, hundreds of thousands of dollars, and the help of one genius mathematician.

Without looking at earnings reports, balance sheets or cash flow statements, he’s discovered a way to get ahead of the biggest moves in the market — BEFORE they become public.

We convinced our researcher to open up his strategy to the public for the next 24 hours. But at midnight tonight, this video will be deleted and we may never put anything like this online again.

Click here to see it with your own eyes before it’s too late.

An old feud between historic rivals Japan and South Korea reared its ugly head this week, sparking a trade dispute that could disrupt the supply chain of U.S. big tech.

If you’re a little rusty on your Japan-South Korea history, here’s the rub: Japan committed atrocities against South Korea during the war.

South Korean’s harbor deep resentment against the Japanese to this day. The Japanese just kind of pretend it never happened.

For the English language adaptation, see the relationship between England and Ireland 20 years ago.

The old feud was given new life earlier this month, when Japan tightened export controls on three chemicals essential for memory chips and phone displays — of which South Korea the world’s #1 producer. (South Korea is also the No. 1 producer of girl bands with more than 15 members and food that gives me a severe allergic reaction but I eat it anyway.)

Tokyo has said it is considering extending trade limits to a further thousand Japan-made products. And that list covers just about every single product they ship to South Korea.

Seoul hasn’t officially announced a plan of retaliation. But the government has started to discuss boosting homegrown alternatives, while South Korean citizens have launched an independent boycott of Japanese products.

The renewed feud with a bad attitude might seem like small potatoes compared to the Empire State Building-sized potato of the China-U.S. trade war. But Japan and South Korea are the number one producers of the semiconductors and displays used in services and gadgets made by Apple Inc., Amazon.com Inc., and Microsoft Corp.

“The politicization of tech supply chains is a massive threat,” Shaun Roache, the Asia-Pacific chief economist for S&P Global Ratings, told the Wall Street Journal. “This is something firms didn’t have to deal with five years ago. They were looking at the economics of the decision and now they have to factor in the politics, too.”

Earlier today, the American Chamber of Commerce in Korea issued a statement warning Japan and South Korea that their trade dispute “will have negative implications globally.” (Do as I say, not as I do!)

Amazon and Apple have yet to comment on the dispute. We’ll have more on this story as it develops/spirals out of control.

What a dumbass. Clearly, they put the mind control drugs in the ketchup.

A single rhino horn can go for more than $100k on the black market. (And I wouldn’t recommend trying to sell it anywhere other than that.)

Folks think the ground-up horn is a magic cure-all for everything from hangovers to malfunctioning ding dongs.

That price tag is why rhinos are a huge target for poachers. One kill and you’re making a six-figure salary in a single night (minus expenses for snacks to keep your tummy full while you’re wiping out a species).

This is why the white rhino is extinct. And why the black rhino is going extinct. (And why the green rhino never had a chance.)

Back in the seventies, there were 70,000 black rhinos. Today there are just 5,500 left. And protecting them requires a lot of manpower and supplies and weaponry. And that means $$$.

As Dominic Jermey, the director-general of the Zoological Society of London, told CNBC: “The reality is that biodiversity is in crisis and there just isn’t enough funding to tackle the issue.

But a team of economists has come up with a solution to cover those costs — and make a profit for investors in the process.

The RIB (mmmm, rib) is a $50 million bond and the world’s first investment actively working towards the conservation of a species.

It works like this: You buy a bond. Five years later you get your money back with a bonus based on growth of the rhino population. The more rhinos there are, the more money you get back. 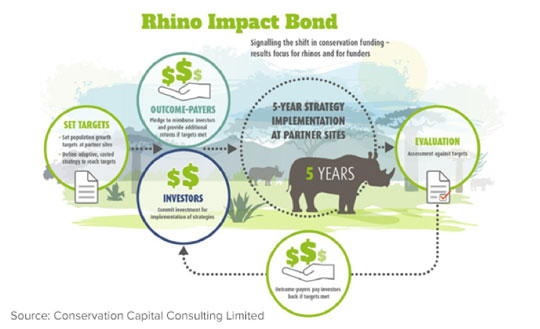 This is the first bond of its kind. But, if successful, it could pave the way for a new type of conservationism (and a new avenue of investing for conscientious investors).

The bond will launch in Q1 of 2020 and aims to boost the black rhino population by 10% in its first round of investing.