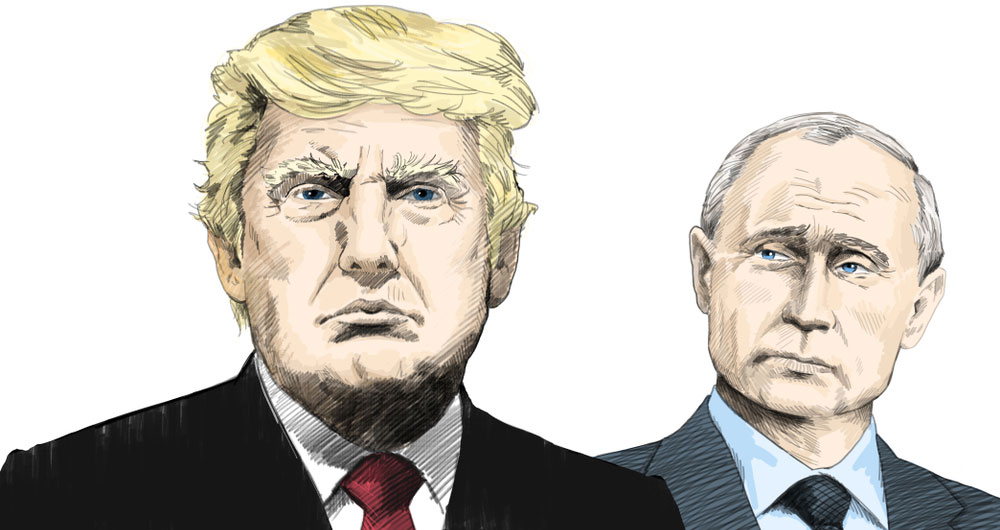 It looks like we got ourselves another arms race.

This might come as a shock to some of y’all.

Reading the headlines this morning, you’d think the worst thing that happened over the weekend was a boring Super Bowl. And yet, as painful as that game was, it pales in comparison to the developments in U.S.-Russia relations.

While we were stocking up on snacks and painting our faces, the Intermediate-Range Nuclear Forces (INF) Treaty, a keystone of the U.S.-Russia nuclear peace array, was dismantled.

The INF Treaty was signed in 1987 to resolve the Euromissile crisis of the 70s and 80s. Most folks have forgotten, or are too young to remember, just how volatile the situation was in Europe back then.

The air was charged with the promise of violence. And the slightest slip up could result in a chain reaction ending in WW III… or even a thermonuclear war.

The Soviets had deployed cruise missiles throughout the Union, capable of hitting anywhere in Europe. The U.S. responded in kind, deploying ballistic missiles that could hit Moscow in under 10 minutes.

The INF Treaty, which was signed into law by Gorbachev and Reagan, was a blanket ban on all land-based ballistic and cruise missiles with ranges between 500-5,500 km. 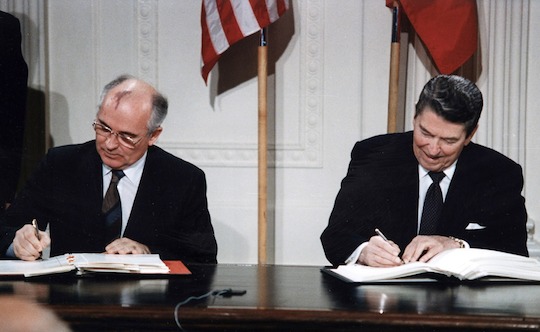 Now, it’s worth mentioning that the INF treaty is not the only nuclear security treaty between the U.S. and Russia.

The current nuclear landscape is the result of a dozen or so treaties and pacts, signed over the course of almost five decades, each one another step towards preventing a global thermonuclear war.

But the INF Treaty has been instrumental in reducing tense standoffs like the Euromissile crisis and the Cuban missile crisis before it.

So how does a keystone treaty like the INF just disappear over the course of a single weekend?

In March of last year, Putin unveiled Russia’s revamped nuclear arsenal, including a hypersonic warhead, and an underwater drone, codenamed Poseidon, capable of flooding ports and seaside cities with a radioactive tsunami.

Addressing the nation, Putin described the new hypersonic warhead as “a low-flying, difficult-to-spot cruise missile with a nuclear payload with a practically unlimited range and an unpredictable flight path, which can bypass lines of interception… and is invincible in the face of all existing and future systems of both missile defense and air defense.”

The Russian strongman capped off the announcement with a computer-generated demonstration of the missile’s alleged power. The target of this virtual attack? Trump’s Mar-a-Lago resort in Palm Beach, Florida.

But the straw that broke the camel’s back is a little missile called the 9K720 Iskander.

The 9K720 is a short-range missile that was deployed in the Russia-Georgian war. And according to Trump and many global security officials, this missile broke — and continues to break — the terms of the INF treaty.

“When only one party respects an arms control treaty while the other side flaunts it, it leaves one side vulnerable, no one is safer, and discredits the very idea of arms control.”

And so, in October of last year, Trump gave Russia 60 days to honor its commitment to the Treaty.

On Saturday, time ran out.

Mike Pompeo announced on Friday that the U.S. would be suspending the treaty.

The White House would leave open a window for talks to resume if Russia were to takes steps to honor the agreement in the next six months. But the Russians were not interested in talking.

“Our response will be symmetrical,” he said on a live television broadcast. “Our American partners announced that they are suspending their participation in the INF Treaty, and we are suspending it too. They said that they are engaged in research, development and design work, and we will do the same.”

The INF Treaty has a six-month dismantling period. If Trump and Putin can’t patch things up before then, which is highly likely, we are looking at a full-blown arms race.

So what does this mean for us?

Well, some economists believe that a good old-fashioned arms race can have an enormous economic benefit for a country. Military spending boosts business confidence, which drives physical investment and economic growth.

However, in many cases, drastically increased military spending only serves to lower macroeconomic growth as it leeches money away from investment in productive sectors and social expenditures.

And with the global economy already in a synchronized slowdown, we could be looking at a world-scale recession before the end of the year. And that’s not even the worst-case scenario.

We’ll be keeping a close eye on this story as it develops. But today I’d like to leave you with a quote from military strategist Herman Kahn.

World War III? Well, that remains to be seen.

P.S. Governments around the world are secretly preparing an alternative strategy for the next big crisis: a lockdown.

The global elite has already started making their own preparations, including hoarding cash and hard assets.

It will be the average investor who suffers most — unless you act now.