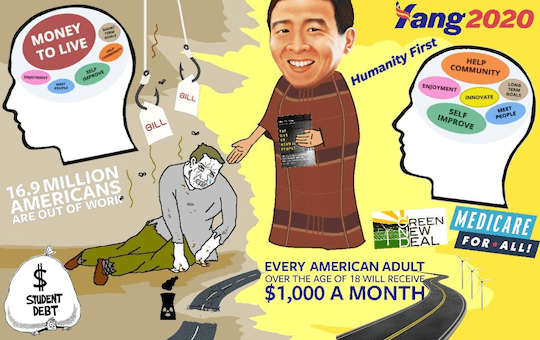 “One of the reasons Donald Trump won,” presidential candidate Andrew Yang says, “is we automated away 4 million manufacturing jobs that were based in Michigan, Pennsylvania, Ohio, Missouri, Wisconsin… all the swing states.”

He’s being called the “Spock” of presidential candidates by some…

And the “Anti-Trump” by others…

And he’s making a case for Universal Basic Income that libertarians, liberals, and conservatives alike are all jumping on board with…

The essence? Something must be done to ease the burden of the massive amounts of job displacement caused by high-tech.

Everyone should be a “shareholder” in the American economy, and receive a “freedom dividend.”

And that UBI will free up creativity, imagination and entrepreneurship, the likes of which we’ve never seen.

It sounds like a dream. (Tomorrow, we’ll dive into the very real potential dark side of this dream.)

For now, let’s consider what he’s saying, and why he’s so attractive (aside from the obvious “free money”.)

Speaking of creative destruction, there’s something you should consider adding to your portfolio…

NFL ratings are already dismal. And, though nobody is talking about it, this is the final nail in the coffin.

It has to do with a HUGE trend in the Asian entertainment industry, alongside a massive demographic shift in America, that’s stampeding our way.

(No, it has nothing to do with V.R., either, though V.R. will play a role in the future.)
James Altucher has made a video “leaking” this breaking market opportunity.

In the first minute, James explains how a special announcement could give regular folks a shot at MILLIONS…

Starting as soon as tomorrow.

“You don’t need to be rich to see how to cash in on this,” says James. “But there is a catch… Due to the sensitive nature of this video…

“YOU MUST watch by TONIGHT AT MIDNIGHT EST.”

After midnight, this video, and the opportunity to get in one of the greatest tech-disruptions of 2019 comes down…

Click here now to see the video for yourself.

Back to UBI and Yang…

Automation is eating away at jobs at an accelerating rate. No doubt.

We know with reasonable certainty that truck drivers, the most popular job in 29 states, will be out of jobs in no less than 15 years.

And the only solution the central planners have come up with is to train truck drivers in software engineering. (Ehhh…)

One industry among hundreds of others.

Henry Hazlitt takes on this issue in his book, Economics in One Lesson.

In his chapter, “The Curse of Machinery,”  Hazlitt asserts that machines in the short-term do displace jobs, but unlock opportunities for new jobs to be created elsewhere.

Yet, as Hazlitt himself admits, the new jobs after any creative destruction caused by automation don’t emerge as quickly as we’d like.

And it can cause havoc in the meantime.

“Let us see, for ex­ample, what happened in the stocking industry. New stocking frames as they were introduced were destroyed by the handicraft workmen (over 1,000 in a single riot), houses were burned, the in­ventors were threatened and obliged to fly for their lives, and order was not finally restored until the military had been called out and the leading rioters had been either transported or hanged.”

That’s the “button” Yang is pressing:

Every individual receives a “freedom dividend.”

You are a shareholder of America. And you get a dividend.

This would be an “opt-in” program for those already receiving welfare benefits. And those who opt-in would lose their current benefits (with some minor exceptions).

And, as he points out to libertarians…

Milton Friedman, the patron saint of libertarian thought, was actually for a UBI scheme that simplified the welfare program by removing bureaucracy.

Hate it or love it…

The sentiment for a UBI scheme has been on the rise, and shows no signs of slowing down.

And Yang has an extra edge.

For people who are tired of the “outrage politics”…

Yang has no interest in identity politics, or using emotional political tricks to get an advantage.

Millennials love him. He hits all the right pain and pleasure points.

He has ties to the “Intellectual Dark Web,” a la Sam Harris (of which Jordan Peterson is a part of), so he is very much an outsider…

From the outside looking in, he is emerging from the “bleeding edge” of thought leaders.

And is creating the same energy in the “meme-o-sphere” as Trump did during his campaign.

He comes from the private sector as a serial entrepreneur and CEO.

And, as mentioned, a problem for those advocating against the UBI is, he’s coming from all sides. He makes a compelling case for libertarians, centrists, liberals, and conservatives.

And an even bigger edge:

There’s no firepower to use against him for using sly tactics to “buy votes,” when that is, in fact, part and parcel of his entire platform. (Smart.)

Before we dive into the dark side of this plan…

We want YOUR take.

Yang recently did an interview with the Being Libertarian group:

Watch it below and tell us what you think: LFTodayFeedback@lfb.org.