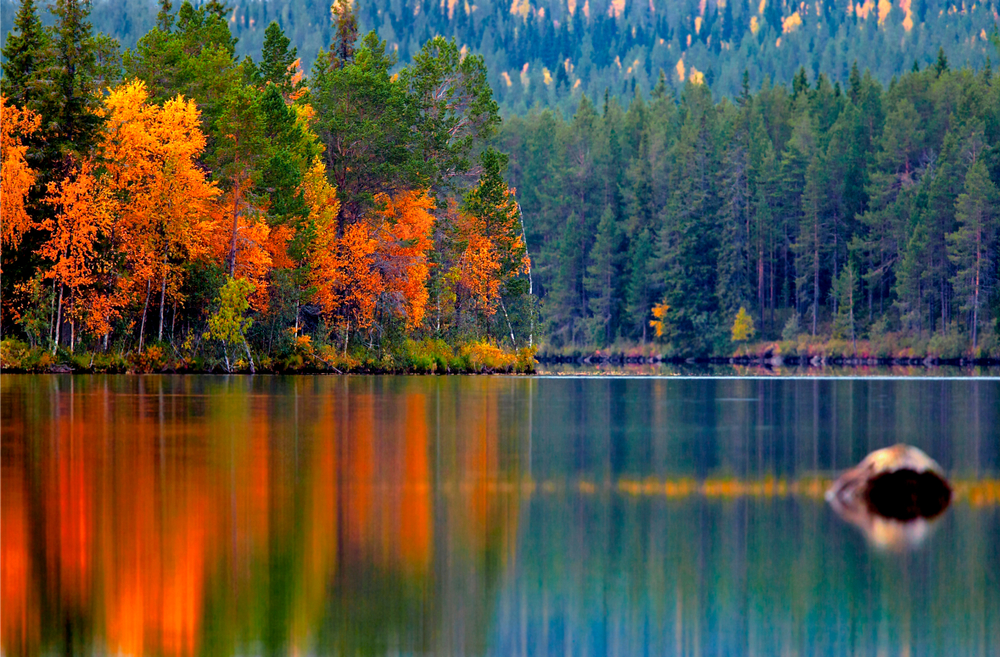 But the “2-Minute Retirement Rescue” does…

Finland has released the results from its Universal Basic Income (UBI) experiment and the verdict is (drumroll, please)…

Twas an enjoyable failure of sorts.

The experiment: For two years, 2,000 unemployed Finnish people received a monthly payment of €560 ($634). This was instead of the usual unemployment benefits which would have been a similar sum but based on means testing.

The goal: The financial security would help recipients get back on their feet and get back to work.

Did it work? Is Shaquille O’Neill graceful and petite?

Recipients of the UBI were no more or less likely to go back to work than a control group who received traditional unemployment benefits. But the results weren’t all bad.

In the end, The UBI group (not to be confused with the always-miserable UTI group) were much happier than their means-tested counterparts.

Because they knew exactly how much money they had coming in every month, they experienced less stress and fewer financial worries.

Meanwhile, the control group was worried about losing their unemployment benefits or making less money on a month to month basis.

What do unemployed Fins worry about: Fins who try to work part-time sometimes found that they actually ended up with less money at the end of the month. And those who dedicate too much time to their hobbies can have their benefits revoked entirely.

Another unforeseen upside was that the UBI group had more trust in other people and social institutions. And they showed more faith themselves, their personal finances, and in their prospects of finding employment.

Things I know about Finland:

It’s nice that all those unemployed Finns are happy. But this wasn’t the earth-shattering results researchers were hoping for.

I wouldn’t count on seeing UBI over here any time soon.

But if you wanted a “guaranteed monthly income,” I’d suggest you check out the “2-Minute Retirement Rescue.”

By following the simple financial technique in this video, you could make $3,000 in extra income each month without any hard work or government handouts.

I’ll be talking about this more in today’s One Last Thing section, near the bottom of the e-letter.

But if you can’t wait, click here to see the “2-Minute Retirement Rescue” in action.

You just walked in on me dusting off my Big Book of Weed Puns.

As reported by Forbes and MarijuanaMoment.net, a top Republican Congressman is peer pressuring Dems to toke on a dank marijuana bill to protect state cannabis laws.

(Yuck. I hated that. No more weed puns, folks.)

“The legal status of cannabis in the United States is in disarray. It is incumbent on Congress to clarify these issues and reform our federal laws,” says Doug Collins, the ranking minority member on the House Judiciary Committee.

“More than 30 states and the District of Columbia have legalized the medicinal and/or recreational use of cannabis. Other states have opted to decriminalize cannabis possession, or to legalize the consumption of certain cannabis-derived extracts. Some states still prohibit cannabis use of any kind.

“Given that the substance is still a Schedule I drug under federal law, this conflicting patchwork of state and federal laws has created a unique set of legal challenges.”

With a Dem-controlled Congress and Republican Senate, it’s a struggle to get anything passed into law these days (the system works!). But this bill is one of the few in play with bipartisan support.

The Strengthening the Tenth Amendment Through Entrusting States (STATES) Act (someone’s acronym game was on point that day) would shield state cannabis laws from federal intervention, giving some much-needed clarity and security to a booming industry.

Forty-five members of Congress, from both sides of the aisle, have already signed onto the bill — including Democrat Elizabeth Warren and Republican Cory Gardner. While President Trump voiced his support for a previous version of the bill which was being puff-puff-passed around Congress last year.

“I really do. I support Senator [Cory] Gardner,” said Trump. “I know exactly what he’s doing. We’re looking at it. But I probably will end up supporting that, yes.”

Well, I guess we know what Jr. and Eric have been up for the last two years.

It would also be an incentive for states that were on the fence to legalize to get off their asses and claim a slice of the insane profits legalized states have been raking in.

Response from weed stocks was a bit of a mixed bag. While the bill would be an enormous boon for these companies. The news highlighted that the current state of legislation has these companies on shaky foundations.

What do you think? Does this budding industry deserve some clarity? Should states be allowed to make their own decisions? Is weed the devil’s lemongrass?

Like my father, investors have come to expect a little disappointment from Tesla and its bad-boy-nerd CEO. But deliveries for Q1 were beyond disappointing, clocking in at just 63,000 cars, a 31% decrease from Q4.

Tesla’s stock dropped more than 10% after the announcement, but recovered to 7.47% down by the end of the day.

As Aaron Gentzler, editor of The Rundown reports, this casts some serious doubt on the company’s predicted performance for 2019.

Quick math: Not going to happen. Of course, trying to talk reality to raving Tesla bulls is foolish.

For the record, we’re not saying Tesla isn’t revolutionary. What we are saying is if you buy or if you hold Tesla stock, you have no one to blame but yourself.

Tesla tried to cushion the bad news by blaming the poor numbers on challenges in delivering to Europe and China. But investors weren’t exactly charmed by this excuse.

After all, Tesla is pitching itself as the world’s premier electric vehicle (EV) company. But if it can’t work out the logistics of getting a car overseas, that doesn’t exactly inspire confidence.

Investors know that the growth of Tesla’s stock relies heavily on Tesla’s continued domination of the EV market.

But in the next few years, everyone from Nissan and Toyota to Porsche and Mercedes-Benz will be releasing their own electric cars. And these companies already have channels of distribution in Europe and China.

For the record, we’re not saying Tesla isn’t revolutionary. What we are saying is if you buy or if you hold Tesla stock, you have no one to blame but yourself.

The future looks dim for Tesla. But its CEO is staying optimistic… and posting pictures of Japanese cartoons on Twitter. 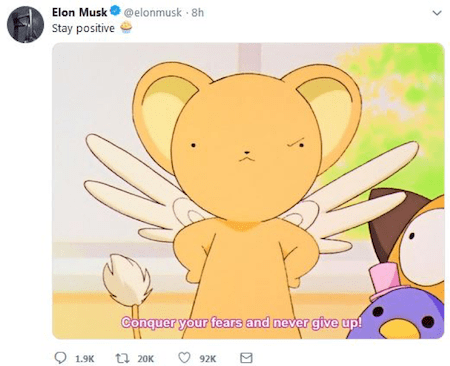 We’ve been covering the developing retirement crisis here in One Last Thing for more than a week now.

It’s obvious even to a ding dong like me that the American retirement is in danger:

With the simple technique, you can master an income-generating tool that Wall Street has kept to itself for decades.

Warren Buffett has privately said he’s made $4.9 billion off a variation of this type of technique. And in just one year, Virtu Financial (one of the world’s largest high-frequency trading firms) racked up over $300 million in gains with this technique without losing a single trade.

All you need to get started are…

And you can see hundreds of dollars in cash deposited directly into your account… within minutes.

Now, keep in mind, if you’re looking to get rich overnight, this isn’t for you.

This is a realistic, proven strategy that allows you to collect $100s in instant investment income on a regular basis.

But you’ll be amazed at how fast these regular income payments add up quickly to improve your quality of life.

Especially when you compare them to the scraps you’ll get from Social Security:

And remember, you can collect that ON TOP of what you’ll receive in Social Security.

The “2-Minute Retirement Rescue” has no impact on your Social Security benefits whatsoever.

This opportunity is available to just about anyone. There are no restrictions based on age, income, or job status.

And today former hedge-fund manager James Altucher is going to show you how you can start making this life-changing instant income for yourself.

All you need to do is follow a few simple instructions.

Click here to see just how easy the “2-Minute Retirement Rescue” can be and start rescuing your retirement today.

Spielberg, regardless of his formidable talent, is way off base on this one. Clearly, a case of Academy attempted collusion to prevent competition and take care of their own. — Jerry P.

Of course, they should be able to compete. Just because they show the movies differently doesn’t mean they don’t have to compete in the acting, cinematography, special effects, scripts, plots, directing, music, and all the other departments that create a movie. Netflix should be rewarded for their creativity and not penalized. — Dominic M.

I like your energy, Dehlia. Adapt or die! We did some adapting of our own today based on a recommendation from a reader:

Hi Shane. In your Market Movements section, would you consider adding the price of silver as it is tied to gold and a much more affordable investment instrument for those who cannot afford the price of gold rounds or bars? — Stephen W.

Done and done. We’re a big fan of hard silver in this office so it should have been up there in the first place.