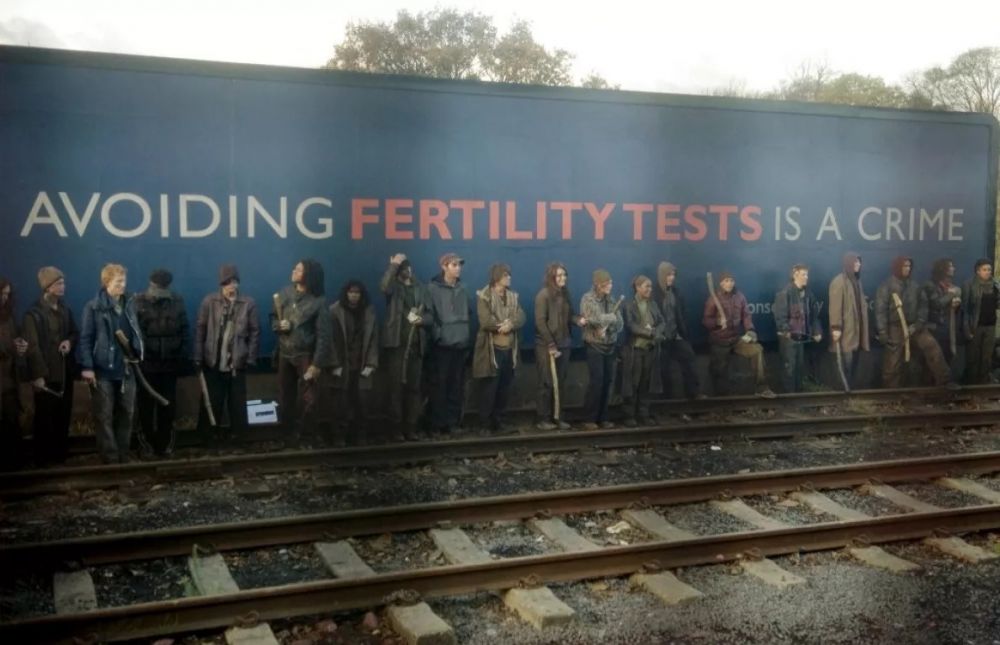 “Early this morning, 1 January 2021, three minutes after midnight, the last human being to be born on earth was killed in a pub brawl in a suburb of Buenos Aires, aged twenty-five years, two months and twelve days.”

That’s the first line of P.D. James’ book The Children of Men.

The story takes place in 2021, following the life of Theo Faron, a disillusioned historian.

The human race is dying out because men have become infertile.

Scientists are scrambling to fix it, but in vain.

Nature, as it happens, isn’t as easy to stitch up as she is to strip down.

Understandably, the population has become scared, weak and easy to control by the Powers-That-Be.

The book weaves through the three timeless themes — love, power and survival… made even more potent because everyone on Earth is staring not just in the face of personal Death… but a black hole of total annihilation.

The only thing left for humanity is the little time left. There’s no grand future. There’s no mountaintop. Every single death takes humanity closer to oblivion.

How our priorities would shift if we knew we were the last to live — destined to meet the same fate as the dinosaurs.

Would we be worried about the same things? Would our aspirations change? Would we be as glued to the Distraction Machine, bickering about complete and utter nonsense?

I wish this missive ended here. On a positive note.

Where total oblivion is merely a thought experiment to shift your focus on things that truly matter. To “trick” you into living more fully and loving more completely.

While The Children of Men is a work of fiction… art, in this case, is becoming reality.

It’s the most terrifying thing you’ll read this year.

But, perhaps, it can be stopped.

Last year, a group of researchers from Hebrew University and Mount Sinai medical school conducted a study on sperm counts in the U.S., Europe, Australia and New Zealand.

Over the past four decades, they found, sperm counts have fallen over 50%.

Let me repeat that.

The average male is half as fertile as his grandpap.

“The Hebrew University/Mount Sinai paper,” Daniel Noah Halpern writes in this month’s GQ, “was a meta-analysis by a team of epidemiologists, clinicians, and researchers that culled data from 185 studies, which examined semen from almost 43,000 men. It showed that the human race is apparently on a trend line toward becoming unable to reproduce itself. Sperm counts went from 99 million sperm per milliliter of semen in 1973 to 47 million per milliliter in 2011, and the decline has been accelerating. Would 40 more years—or fewer—bring us all the way to zero?”

Looking for answers and, perhaps, a silver lining, Halpern called up Shanna Swan, a reproductive epidemiologist and lead author of the study.

Her response: “The What Does it Mean question means extrapolating beyond your data, which is always a tricky thing. But you can ask, ‘What does it take? When is a species in danger? When is a species threatened?’ And we are definitely on that path.”

When Niels Jørgensen, an endocrinologist and co-author of the study, saw the results he said out loud, “No, it cannot be true.”

He’d expected to see a decline in the past, then plateau. Instead, it was a steady downslope with no sign of leveling off.

“We should hope for the best and prepare for the worst,” said Hagai Levine, a lead author of the study. “And that is the possibility that we will become extinct.”

The best guess as to why sperm is at risk of going extinct is the so-called “chemical revolution.”

After the Second World War, hundreds of new chemicals hit the market within a decade or so.

Suddenly, we were exposed to these foreign agents with absolutely no genetic reference point on how to deal with them.

And a lot of these chemicals were endocrine disruptors — chemicals which directly affect the hormones.

(One good book on the importance of hormone regulation, and how hormones shape society, of which I’m currently working through, is the Testosterone Hypothesis: How Hormones Regulate the The Life Cycles of Civilization.)

Well, as it happens, many of the compounds used to make plastics — BPA and Phthalates most notably — are endocrine disruptors.

Phthalates and BPA mimic estrogen in the bloodstream.

“If you’re a man with a lot of phthalates in his system,” Halpern writes, “you’ll produce less testosterone and fewer sperm. If exposed to phthalates in utero, a male fetus’ reproductive system itself will be altered: He will develop to be less male.”

These chemicals are essentially unavoidable.

Every time you touch a sales receipt… BOOM.

Your estrogen receptors are hit.

Drink from a water bottle? BOOM.

Take a pill? BOOM. The coating has phthalates.

“Not to mention,” says Halpern, “medical devices, detergents and packaging, paint and modeling clay, pharmaceuticals and textiles and sex toys and nail polish and liquid soap and hair spray. They are used in tubing that processes food, so you’ll find them in milk, yogurt, sauces, soups, and even, in small amounts, in eggs, fruits, vegetables, pasta, noodles, rice, and water.”

All of this raises a lot of questions…

But one question seems most pertinent.

If anything, what can YOU do to stop this?