Secede From DC: The Solution to a Trump/Hillary Presidency is Simple

A couple of weeks ago, you’ll recall, I high-tailed it down to San Diego to attend the Revolution Against Aging and Death (RAAD) conference.

At one point during the conference, futurist Ray Kurzweil made an “appearance” via what was essentially a robotic teleprompter. (To our colleague Peter Coyne’s disappointment, who had hoped to meet him in person.)

During the talk, the flatscreen-on-wheels said something I found extremely inspiring.

To paraphrase, because I didn’t have the foresight to record Kurzweil’s speech in its entirety (just to take shoddy pics of him licking his lips, apparently), he said, despite what people think, the world isn’t getting worse. Actually, he said, it only seems so to some because our information is getting better.

When all of Earth’s cockroaches are glistening under the sunlight for the first time, it might seem like it’s time to give up on humanity completely. But, in truth, we are simply able to see the world more clearly. Unlike ever before. And it’s only while basking in the truth can we see the solutions to once-cryptic problems.

And, sometimes, sure, the truth is terrifyingly grotesque.

But since humans tend to amplify the negative (for purposes of survival, it is assumed), we see far more negative than we do positive, although both exist around us all of the time. (Unless, of course, you currently live in Aleppo. In that case, you’re in hell.)

For example, because our economic information is better, we no longer have to use nebulous terms like the “invisible hand” and “spontaneous order” to make our points to the uninitiated. In fact, we don’t even have to try to convince anyone rhetorically that freer markets are better for the “99%.” Instead, we have plenty of information which proves this to be true.

Moreover, we can see it in action all over the world. Global poverty is on the decline, while, shocker, economic freedom is on the rise. (Unfortunately, this isn’t the case in the Land of the Free, where economic freedom has been slowly deteriorating for nearly a decade.)

Free markets, not socialism, we now know, will solve crippling poverty all over the world. The only people who still believe in Unicorn Governance are those who have not checked out the data for themselves.

This also means that our information about government keeps getting better, too. Which is great for libertarians.

For example, nobody should be even a little surprised that, in the aftermath of Louisiana’s flooding (the subject of tomorrow’s episode… stay tuned), private disaster relief has drastically outperformed government’s. With technology as our guide in the recent past, we were able to see in real-time (and in retrospect) how in similar disasters — Hurricane Katrina and Hurricane Sandy — the private sector was far more effective and responsive than the government. And, on that front, nothing’s changed. Nor, we suspect, will it.

For example, while well-paying jobs turned to dust last year in America, Big Gummit spent $1 million to watch monkeys run in hamster balls on a treadmill, $5 million to throw parties at clubs to “Help a Hipster,” and $1.2 million to put a sheep in microgravity.

Because, without outlandishly large government, who would spend $1.3 million to study how a koozie keeps a beer cold?

(Next time someone tells you we need to raise taxes, just shoot a PDF copy of the Wastebook their way and say, “Your move.”) 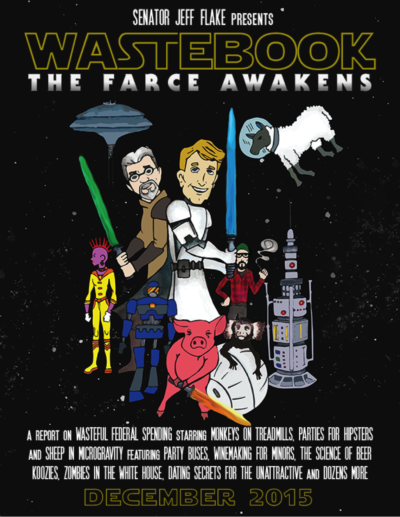 The information age also allows for us to find out some pretty awkward things about our politicians and society-shapers. Things they’d certainly want to keep secret if they had the choice. Fortunately, these days, they don’t.

George Soros, you’ve probably heard, got hit by a team of hackers called DCLeaks, who released evidence of him sticking his fingers in the crisis in Ukraine and calling for the refugee crisis to become a “new normal.”

Also, a hacker reportedly hacked the hackers who hacked the NSA, and is now offering up the NSA’s tools for just $8,000. Quite the drop in price from the ridiculous $568 million (or one million bitcoins), the original hackers — called the “Shadow Brokers” — were asking.

Hillary Clinton… Well, the hits just keep coming. And the alphabet agencies sworn to protect the American citizens from people like her keep looking the other way. Because of this, it’s becoming increasingly clear to the Average Joe that the government’s gone completely off its rocker.

Fortunately, better information leads to a better understanding of the situation at hand for everyone. And for that reason, trust in government is waning. And not just in America, all over the world.

And, now, finally, Assange is setting his sights on Trump: “If anyone has any information that is from inside the Trump campaign,” he said in a recent interview on NPR, “which is authentic, it’s not like some claimed witness statement but actually internal documentation, we’d be very happy to receive it and publish it.

“We have two pretty much reviled candidates,” he went on, “having the lowest approval ratings of any pair of candidates in the last hundred years, going into the U.S. election.

“[It] is generating a desire by various sources, inside and outside campaigns, to contribute information to WikiLeaks and the rest of the news media.”

And while the populace becomes increasingly disenchanted by our “choices” on the national platform, it’s up to us, the freedom advocates, to point them in a new, more sane, direction. With better solutions which provide even better information.

Today, for that purpose, we invite Jim Cox to the show to rap about the simplest, most powerful, and most American solution of them all: mass state secession.

Not only would state secession make our lives better by giving us more choices to live in the ways we see fit (whether you’re progressive, conservative, libertarian or Pastafarian, this is true), it would also make our information better. And would help us to live better, smarter, freer, and more prosperous lives.

Think it’s too far-fetched? Maybe not. Maybe it’s an idea whose time has come. And with a hat tip to Victor Hugo, one cannot resist such a thing.

Disgusted by the prospect of Hillary Clinton and/or Donald Trump having the power of the presidency? I certainly am.

And for full disclosure here, I don’t think any individual should have the powers that have accrued to the president over this country’s development.

But there is one solution to this problem:  Fifty state secession from the United States!

Secession is part of what makes America, America. Secession is as American as apple pie. There are already organized secession movements in a number of states. The strongest of these are in Alaska, Hawaii, California, Texas, Vermont, and New Hampshire.

Allowing parts of the fifty states to establish themselves separately from the others would yield the benefit of better matching citizens’ preferences for what the national government should do. A northeastern state grouping — say of New York, Connecticut, Rhode Island, Massachusetts, and Vermont — would be able to have the features of a strongly liberal government.

The population there could successfully pursue strong gun control, socialized medicine, open immigration, abortion rights, etc. without interference from the more conservative voters in other states.

And a northwestern state grouping — say of Idaho, Montana, North Dakota, South Dakota, and Wyoming — would be able to have the features of a strongly conservative government. The population of such a country could successfully pursue strong gun rights, free market medicine, limited immigration, restrictions on abortion, etc. without interference from the more liberal voters in other states.

This is particularly so since businesses already have established dealings with suppliers and customers in other states. Smaller countries have a history of freely trading with other countries and in fact are among the greatest of economic success stories (see Switzerland, Liechtenstein, and Monaco, none of which joined the European Union but continued a policy of free trade).

Or what must be the most appealing strategy to the American population; all fifty states could stay in this new union as the New United States and deal with all the issues anew. In any case, the proposed secession here would leave only D.C. and its 16 territories behind to continue under the presidency of Clinton or Trump.

And the attendant problems from the history of what has been the U. S. could be left behind: the $20 trillion debt, the fiat money, the interventionist blowback, and the crony trade treaties and regulations. The seceding states would not be burdened by the additional disasters that will inevitably come from a Clinton or Trump presidency.

To deal with all of the federally owned land and other assets in the states, the states could do a reverse eminent domain on the feds. Properties currently owned by the federal government could be bought by the states or private owners at a price that the states each find as constituting just compensation.

Fifty state secession is a historically validated solution to current problems. It is a real world solution to the Trump/Clinton problem America is facing.