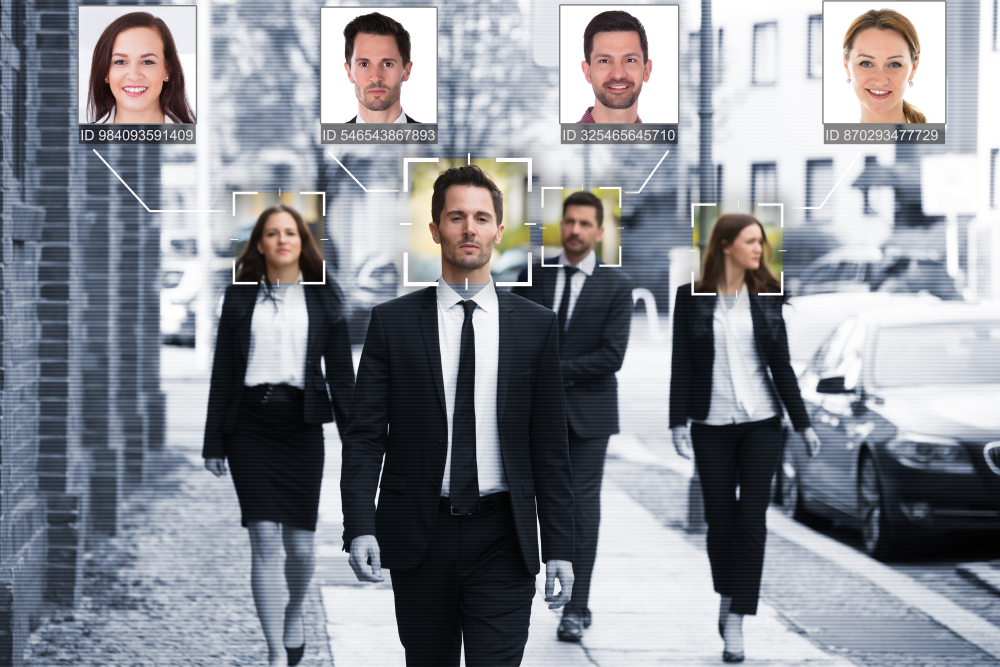 Hong Kong Enters Recession
(And Tourism is Down for Some Reason)

The blood-stained streets of Hong Kong are choked with millions of protestors crying out for democracy and liberation from a totalitarian dictatorship… and as you can imagine, that’s not great for productivity.

Hong Kong’s Financial Secretary Paul Chan gave the global community a sneak peek of Thursday’s economic report on his blog. (Subscribe to his RSS feed for portents of doom and pictures of his cat.)

According to old Paulie C., the region is in recession and will be unlikely to achieve any economic growth this year. (Though we did see some promising numbers in the gas mask industry.)

“The blow to our economy is comprehensive,” wrote one of the few men in the world who is still blogging. “After seeing negative growth in the second quarter, the situation continued in the third quarter, meaning our economy has entered technical recession.”

Business has slowed to a crawl in this once-prestigious financial hub, as violent clashes between pro-democracy demonstrators and police make day-to-day life a living nightmare.

Yesterday, as Paul Chan was updating his blog and staring wistfully at his Snow Patrol posters, protesters vandalized Chinese-owned businesses and tossed petrol bombs at Hong Kong police who responded with volleys of tear gas and rubber bullets. 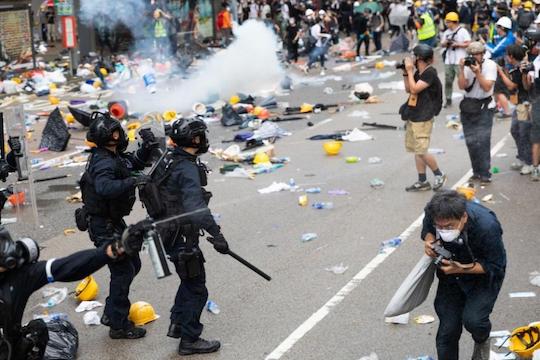 You gotta respect top-right guy’s photo-taking form. Even in the face of tear gas and mace, elbows are tucked, shoulders are steady. Definitely a dad. 10/10.

Meanwhile, Hong Kong’s tourism numbers have hit record lows since the entire city descended into the third act of a Mad Max movie.

As of October, tourism has plummeted 50% in the region (because dim sum does not typically pair well with tear gas) and continues to drop every month.

Fun Fact: Despite its name, tear gas is not a gas. It’s an aerosol that activates pain receptors. Ouch.

Hong Kong authorities have announced measures to support small businesses that have been impacted by the protests, but Paulie C. says the measures will only “slightly reduce the pressure.”

One Last Thing is now a Chinese-owned state news agency that only runs news about China and some guy in Indiana who has this huge Pez-dispenser collection.

All hail the paintings of that giant bald guy hanging everywhere in China for some reason. (It’s my first day as a state shill for the regime, alright? Cut me some slack.)

Bitcoin and related stocks in China surged today after Chinese President and resident of the 100-Acre Wood, Xi Jinping, said that China will speed up research on blockchain technology.

Note: Blockchain is the underlying tech behind bitcoin and other cryptocurrencies, which nobody really understands.

After Xinhua News Agency published the fuzzy Führer’s comments on Friday, searches for “blockchain” surged 40 times in two days on Baidu. (Baidu is like Google but the Wikipedia page for Tiananmen Square is missing.)

“It is unprecedented that China’s top leadership has elevated any technology to such a high level,” said Zhang. “It’s a big boost to market confidence.”

Bitcoin was trading just below $7,500 on Friday morning but surged to $10,000 just a few hours after the story broke. This morning, the OG crypto had pared off some of those gains and was trading around the $9,370 mark.

Shares of Xunlei, a Chinese blockchain company trading on the NASDAQ, surged by 107% on Friday, the largest single-day gain since the company went public in 2014.

Meanwhile, in China, where stocks are limited to a 10% gain per day (and millions of minorities are imprisoned in concentration camps), an index that tracks 53 of China’s top blockchain stocks rose 9% this morning. This year alone, the index has risen more than 60%.

Most governments have written off blockchain as at best, a tech fad, and, at worst, the most dangerous thing to happen to the status quo since Hitler thought Germany needed some extra living space to put up its feet.

China, on the other hand, is going all-in on the blockchain. The central bank of the Great Red Dragon is currently developing its own digital currency. And with the honey-loving bear announcing public approval, it sounds like the regime is 100% behind the effort.

Google Gets an “Ask Jeeves” Makeover

Google says its search engine will now be able to understand the string of drunken nonsense you force-feed it at 2 am after a groundbreaking language update.

This new search system is optimized to recognize full human sentences, rather than just picking up on the occasional keywords and sending you to the Deviant Art page for “naked sonic.”

“If there’s one thing I’ve learned over the 15 years working on Google Search, it’s that people’s curiosity is endless,” said Google Vice President Pandu Nayak, with a thousand-yard stare.

“We see billions of searches every day,” says Nayak, like [boobs] and [butts]. “And 15 percent of those queries are ones we haven’t seen before,” like [borbs] and [bubutts].

“So we’ve built ways to return results for queries we can’t anticipate.”

The new system (codename: Bidirectional Encoder Representations from Transformers or BERT) will enable the search engine to parse the context of sentences, not just the keywords.

For example, when searching for travel information, Google will now offer different pages depending on whether you type “to” or “from.” 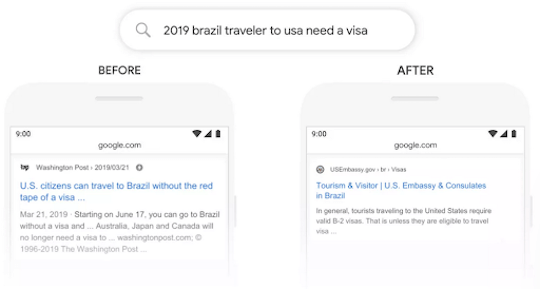 Nayak said the development represents “one of the biggest leaps forward in the history of Search” and said it was all made possible thanks to machine learning.

(Reminder: Machine learning is when a company records your conversations on their devices and has them transcribed by some dude in India and then pretends it was all done by some magic robot.)

Okay. I promise this is going to be the last China thing for a while. (At least until the next time they make a beloved American celebrity bow to an authoritarian regime anyway.)

As you’re probably aware, China’s been developing a state of the art national surveillance system to monitor every single thing their citizens do every moment of every day of their life.

You could say it’s a step towards the world of constant surveillance outlined by Orwell in his dystopian masterpiece 1984. But I’d say it’s more like a short Uber ride and we’re there to 1984.

So far, they’ve been honing their system tracking racial minorities in the northwest of China. But now they’re turning their attention to EVERY SINGLE PERSON IN THE COUNTRY.

From December 1, 2019, you will not be able to sign up for the internet in China without submitting a “facial identification” scan.

Using this scan, the party can use its powerful face-tracking AI to monitor and watch every single citizen as they go about their daily lives. This task is made all the easier with 500-megapixel “super cameras” that allow the regime to film picture-perfect images from miles away.

China currently has 854 million internet users. And if they want to keep using the internet or buy a new phone, they’re going to have to submit a scan of their face to the government.

China’s Ministry of Industry and Information Technology (MIIT) says the decision is part of a move to “safeguard the legitimate rights and interests of citizens in the cyberspace.” (And, you know, watch Wang when he’s doing the grocery shopping and stuff.)