The U.S. is a net exporter of oil for the first time since FDR turned the White House kitchen into the world’s most expensive hot dog stand.

Exports of dead-plants-and-dinosaurs-that-make-the-car-go exceeded imports for the first full month of positive trade since the 1940s, according to the Energy Information Administration (EIA).

This marks a dramatic turnaround (or, as they call it in the theatre, a gasp-what?!) from recent years, driven by three contributing factors:

In layman’s terms, we got butt-loads of oil and we ain’t using it, thanks to more fuel-efficient vehicles and that one guy who bikes to the office and is just so sweaty all the time.

Which begs the question: why don’t U.S. companies just use the stuff we got at home? 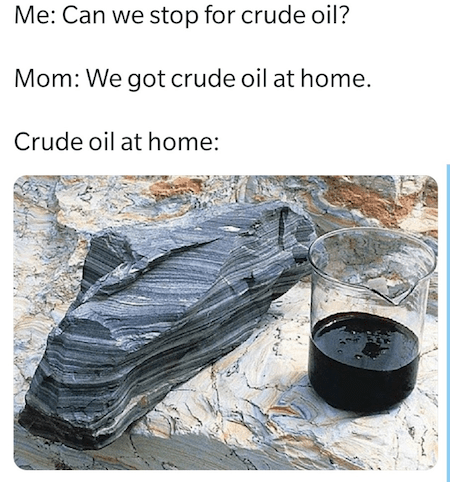 Now, I ain’t no fancy pants oil-oligist. But according to Refining Millions of Barrels of Oil for Dummies,oil pumped from shale fields is lighter than foreign oil (which makes it perfect for salads).

Most U.S. oil refineries, however, were built before the shale-oil boom and are designed to process heavier oil. But if the shale oil industry keeps on boomin’, we may see U.S. companies refitting their gear to bank that home team discount.

According to independent energy research company Rystad Energy, the rise in oil exports (combined with natural gas, renewable electricity, and my wife turning off the bathroom light when she’s done in there, honey) is pushing the U.S. toward the much-coveted goal of total energy independence.

“This milestone follows a strong period of growth in both hydrocarbon and renewable resources, and we forecast that the U.S. will have primary energy surplus – and not a deficit – by February or March 2020, depending on the intensity of the winter season,” said Rystad Energy’s Sindre Knutsson.

Knutsson’s team (AKA the Knutheads) predicts that by 2030, total energy production in the U.S. will outpace demand by about 30% (unless a certain someone keeps getting up in the middle of the night to pee and leaving the bathroom light on).

“These changes in the U.S. energy balance could turn its petroleum deficit of $62 billion in 2018 to a surplus of $340 billion by 2030,” says Knutson. “That adds up to a $400 billion shift, in the space of only a dozen years, thanks primarily to the gargantuan rise of output from the U.S. shale sector.”

In his love-letter to shale, Knutsson predicts that the emerging energy surplus will make the U.S. less vulnerable to foreign energy-related politics and facilitate growing exports.

“The growth of the shale industry will continue to revolutionize the US energy balance and create new opportunities for exports and developments in the country’s total trade balance,” said Knutsson.

That is if the U.S. #KeepsOnFracking.

U.S. voters are fairly evenly split on the issue according to recent polling.

Forty-five percent of registered voters support the elimination of the practice which has been associated with a broad range of health problems for those in the fracking zone. (Come on down to the Fracking Zone this Wednesday and get fracked with $2 frosty margs and 12 million barrels of crude oil! *Electric guitar noise*)

Predictably, that number jumps to 58% among Democratic voters. But it likely won’t be a topic up for discussion unless either of two Democrats wins the presidency next year. (I’ll give you a hint. Their names rhyme with Shmanders and Shwarren.)

Prices of U.S. crude oil jumped about 1.7% this morning after Persian Gulf officials said Saudi Arabia would push for an extension to oil-production cuts through mid-2020.

Green Sunday by the Great Lakes

Hundreds of marijuana-loving Michiganders lined up outside of Ann Arbor weed dispensaries yesterday as recreational legalization went into full effect and kicked off a golden era for of Magic Johnson black-light posters.

It’s been more than a year since the fine folks of I Can’t Believe It’s Not Canada™ voted to legalize the devil’s arugula but it takes time to get everything ready logistically (and marijuana users aren’t exactly known for speed and organization).

Shop owners handed out free joints to the freezing Michiganders waiting in line to be among the first in the state to legally #420blazeit.

The rollout of legal weed to Michigan dispensaries will be characteristically slow. So far, the state has only issued 18 licenses to marijuana businesses, including growers and processors. (Which is why all the Yoopers had to drive their ass down to Ann Arbor this weekend.)

Anyone over the age of 21 with a valid state ID or driver’s license can purchase recreational marijuana from licensed retailers. Obviously, it’s still illegal to drive under the influence of marijuana. But that didn’t stop some idiot leaving the marijuana dispensary and immediately ramming a cop car.

To meet that unprecedented boom in demand, Michiganders may have to push aside an almost 100-year old rivalry to tap their southern neighbors’ supply of the sticky icky.

You see, somewhere in a field in Cleveland, Ohio is a massive state-of-the-art greenhouse that’s about to revolutionize the marijuana market. 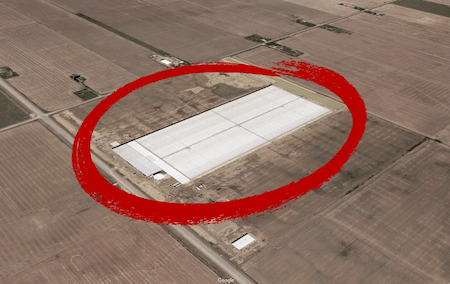 At over 1.4 million square feet, this green machine is capable of pumping out nearly 341,000 pounds of marijuana every single year. (To put that into perspective, the entire Canuck market only produces about 132,000 pounds.)

This 70-cent company is primed to supply the wave of legalization sweeping the nation. This is why this former hedge fund manager and Wall Street Journal bestselling author is saying it’s “the only marijuana stock you’ll ever need.”

Click here to see how this 70-Cent marijuana stock could hand you a once in a lifetime fortune if you act before December 31.

Santa faces an unprecedented challenge this holiday season, with more deliveries than ever before combined with a significantly shorter delivery window (also he just started Keto and his energy levels are all over the place).

Thanksgiving fell on the latest possible day this year (except for that one time it was on January 2), which only leaves 23 days to Hanukkah and 26 days to Christmas.

This gives delivery companies (which Santa has been using for his deliveries since the mid-80s) six fewer days to deliver 2 billion packages to good boys and girls across the nation. (And probably a butt-ton of coal as well.)

The last time the holiday delivery window was this small was 2013. But Jeff Bezos wasn’t king of the world back then and we didn’t do our entire Christmas shopping online. (Hey, does anyone remember stores?)

Back in the hazy days of 2013 (while Beyoncé was trying to get that one picture of her off the internet), we spent about half as much as we do now on e-commerce.

“The math leaves little room for error,” Citi transportation analyst Christian Wetherbee told theWall Street Journal. “We think that the set up for the parcel carriers is as tricky as we’ve ever encountered. The risk someone gets coal in their stocking seems elevated.”

Shares of FedEx, UPS, and Amazon all fell this morning in step with the market, as the Trump administration announced tariffs on Argentina and Brazil and stoked the fires of global anxiety.

Here in the pages of One Last Thing, we’ve been closely following the descent of China into a 1984 cartoon dystopia and the administration’s efforts to spread their ideology across the world by giving away free gadgets.

Earlier this year, we reported on the Chinese government’s use of state-of-the-art surveillance and facial recognition systems to round up racial and religious minorities and stick ‘em in concentration camps without trial or sentencing. (You know, like Nazis.)

Meanwhile, the old red dragon has been spreading its cultural influence and philosophy of Big Brother is Watching You and That’s Fine by offering to build internet and surveillance infrastructure in poor African countries.

It’s part of an aggressive initiative called the Belt and Road, named after the Silk Road, but it might as well be called Make the World China Again.

Over the past few years, China has spread its facial recognition tech across Europe and throughout Africa.

And now, Chinese companies are stepping in to shape UN standards and regulations on facial recognition, according to leaked documents reported by the Financial Times.

And as you can imagine, human rights, consumer privacy, and data protection aren’t high on the list of “standards” set out by these companies (who just so happen to work for an authoritarian dictatorship).

According to a report by U.S. think-tank the New America Foundation, China sees these standards as the key to cultivating global trust in their oppressive, spooky, and probably-powered-by-the-souls-of-dead-orphans surveillance tech.

“The drive to shape international standards… reflects longstanding concerns that Chinese representatives were not at the table to help set the rules of the game for the global Internet,”the authors of the New America report wrote. “The Chinese government wants to make sure that this does not happen in other ICT spheres, now that China has become a technology power with a sizeable market and leading technology companies, including in AI.”