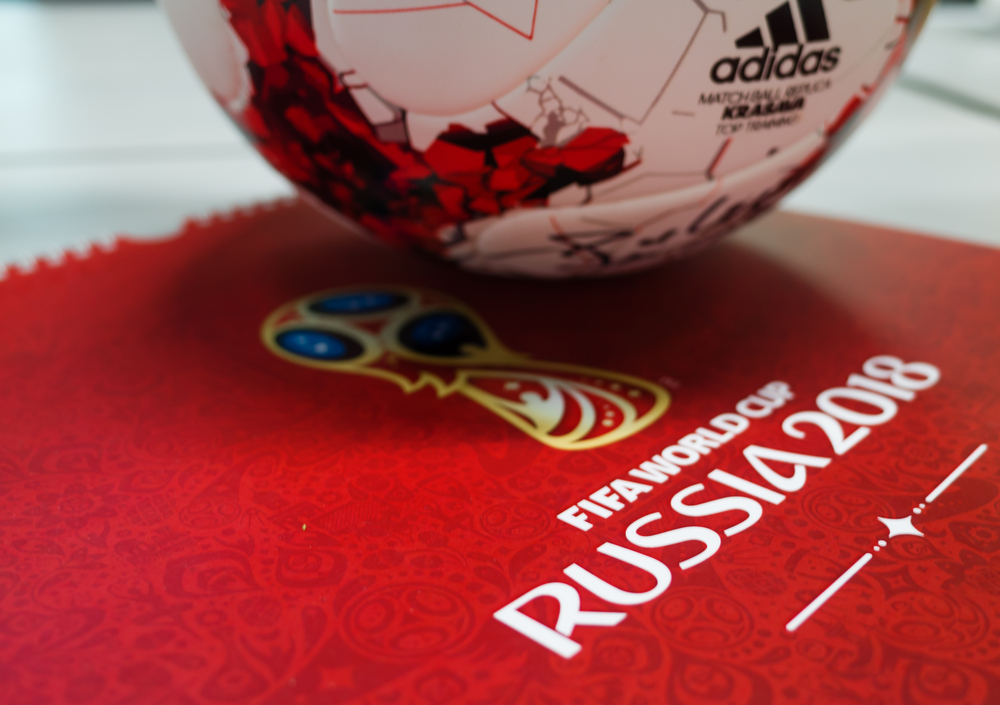 An anonymous source leaked a sample of a Russian dossier on “how to bribe FIFA officials” which may or may not be tied to the former soviet country’s successful 2018 World Cup bid.

(Editor’s note: As a responsible pillar of journalism, we can’t definitively say for sure if Russia used this dossier to — nah, I’m kidding. They probably 100% did it. But I don’t want to be murdered in my bed by a Russian sleeper agent so we’re going to lean heavily on our old friend “allegedly” in this piece.)

The emails were leaked by a Telegram account calling itself BlackMirror (cool reference, hacker bro), who says its offering these “free samples” to drum up buyers for a full file detailing all the yummy corruption and bribery that took place in the 2018 World Cup bid. (Just like a drug dealer or frozen yogurt stand.)

Not-Dying-O-Gram: Telegram is an encrypted messaging app like WhatsApp, which is perfect for exchanging the kind of information that leads to “accidental falls” off of frozen Moscow balconies.

According to the Guardian newspaper (you may be surprised to know this, but I do not speak Russian), one of the FIFA officials promised to give his vote to Russia in exchange for “generous compensation for his consulting services.”

He later specified “generous compensation” to be somewhere in the region of about €3 million.

Strapped for cash? A Cypriot FIFA executive’s vote could be snapped up for the low, low price of €1.5 million. While the former FIFA Vice President Jack Warner would vote for “whoever offers him the most.”

Some of the FIFA execs (now would probably be a good time to sneak in a good old “allegedly”) weren’t particularly hard to persuade according to the Dossier.

British football executive Geoff Thompson could allegedly be swayed through “diplomatic channels [and] expensive gifts to his wife, who has a strong influence on him”. 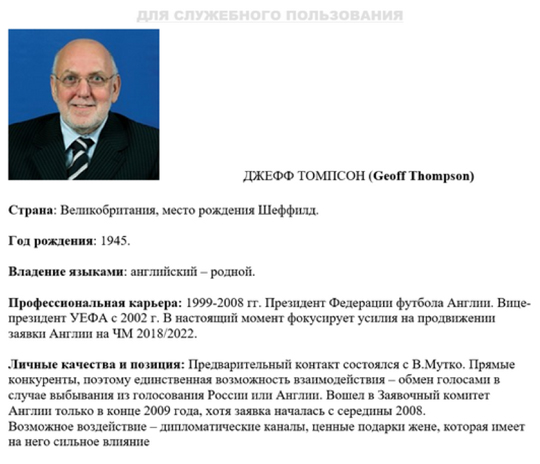 I don’t want to say Geoff is a weak link… but if you buy his wife tickets to see Elton John, he’ll probably hand you the World Cup.

The emails come from (let’s stick in an “allegedly” here) the account of Sergei Kapkov, a Russian politician and former head of the country’s national football academy

BlackMirror (which, I know this isn’t the time or place, isn’t as good a show as everyone seems to think it is) refused to reveal how they came across the emails, telling the Guardian, “We don’t discuss technical questions.”

Allegedly, allegedly (I’m going to stick two allegedlys in here because this paragraph mentions Putin and my balcony is looking mighty icey as it is), the head of the Russia 2018 organizing committee emailed the dossier to three people: Kapkov, Arkady Dvorkovich, an aide to the president Dmitry Medvedev, and Igor Shuvalov, the deputy prime minister under Putin.

Alexei Sorokin, the head of Russia’s 2018 World Cup denied the existence of the dossier and called BlackMirror’s claims “nonsense.”

“It’s nonsense,” Sorokin told Russian news outlet, RBC. “It seems to me that the whole thing was fabricated from beginning to end.”

Shares of Fitbit (FIT) soared like my heart rate when I try to stand up after Google said it would buy the company for $2.1 billion this morning.

Fitbit’s stock has been walking laps around the hockey field with the out-of-breath nerds since it IPOed in 2015. But it got a much-needed shot to the arm earlier this week when rumors of a Google acquisition started circling.

When Reuters leaked the news, Fitbit’s share price hopped, skipped, and jumped 31% as investors piled into the stock before the window of uncertainty closed.

Those quick-on-the-draw investors were rewarded this morning when Fitbit announced the deal was done and the stock surged another 17%.

“Google is an ideal partner to advance our mission,” said Fitbit CEO James Park, who has been dodging my emails about how to block my wife from my Fitbit account.

“With Google’s resources and global platform, Fitbit will be able to accelerate innovation in the wearables category, scale faster, and make health even more accessible to everyone. I could not be more excited for what lies ahead.”

According to a press release from Fitbit, the deal is expected to close in 2020, pending approval from Fitbit’s stockholders and regulatory bodies. (Incidentally, my wife says she bought me a Fitbit because I have a regulatory body.)

Separately, Fitbit and Google have struggled to compete in the wearables market. But by combining their tech and resources, they’ll be hoping to take a bite out of Apple and Samsung’s ballooning wearable sales.

It’s that time of the month again when grandfather gathers the family around a blazing fire to drink ouzo out of a shoe and read the monthly jobs report. (Just my family? Ok then.)

The U.S. added 128,000 jobs to the economy in October, far more than anybody was expecting this month. (I might retroactively lie and say I expected exactly that much when I’m talking about this in the bar tonight.)

There’s usually a margin of error with these estimations and we’ll likely see a correction in the coming months. But even so, this jobs report blasts economists’ predictions of just 75,000 jobs out of the proverbial water. (And into the proverbial trash. Take that, economists!)

In fact, employment would have grown by as much as 200,000 jobs this month if it wasn’t for the GM strike and the end of 20,000 temporary census jobs.

These figures suggest the U.S. economy is still holding strong, despite signs of a global economic slowdown and trade anxiety. Unemployment rose to 3.6% from 3.5%, but it still sits near the lowest point t’s been in 50 years.

Restaurants and bars were the MVPs of October’s job report, adding an additional 48,000 jobs. Show your support by going to your local pub and adding a bunch of booze to your mouth.

Earlier this week, the Fed voted to cut interest rates for the third time this year.

This vote was widely anticipated by financial markets. But what does it mean for the U.S., and where does Powell’s Fed go from here?

To find out, I sat down with our in-house expert on monetary policy, Editor of Money & Crisis Graham Summers.

What’s your take on this, Graham?

If you’ll recall, back in July when the Fed first cut interest rates, it claimed that this was merely a “mid-cycle” adjustment, meaning that it was NOT the start of continuous easing.

Fast-forward to today and it’s clear this is no longer true. The Fed has now cut interest rates three times – signaling the start of a major easing cycle.

We received confirmation of this from Fed Chair Jerome Powell’s Q&A session after the Fed meeting in which he stated:

“I think we would need to see a really significant move up in inflation that’s persistent before we even consider raising rates to address inflation concerns.”

Put another way, inflation needs to become a persistent and MAJOR issue before the Fed considers raising rates again. And given that the Fed goes out of its way to underestimate inflation, this means the Fed is effectively finished with raising rates for a LOOOONG time.

Bear in mind, he said this as stocks were hitting new all-time highs.

In the simplest terms possible, this latest Fed meeting tells us monetary policy normalization is over. The Fed will be easing monetary conditions from now on.

This has opened the door to the market hitting levels previously unimaginable. I’m talking 4,000 on the S&P 500.

The S&P 500 is in a clear uptrend. As I write this, stocks are overbought and need to consolidate, but this trend indicates a move to 4,000 (if not higher) is coming.