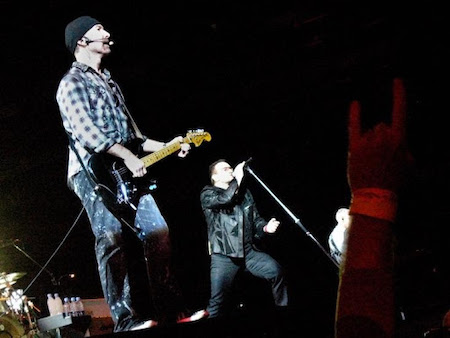 Credit-scoring company FICO has developed a new way to reduce Americans to an arbitrary number with the launch of the FICO Resilience Index.

By analyzing your credit history, the Resilience Index supposedly measures your ability to financially weather a whole bunch of crappy stuff happening to you at once.

The ALL-SEEING new system will rank credit consumers on scale of 1-99; with 1 being a literal billionaire who could lose hundreds of millions of dollars and still live like a king for a thousand years; and 99 being a guy all-in on a startup making luxury yachts out of cocktail napkins.

The index might seem like the desperate actions of an unnecessary institution trying to justify its existence in turbulent times, but FICO claims it will allow folks with low scores to access credit that they might not otherwise get.

“It turns out there are tens of millions of consumers that have lower FICO scores, below 700, that do relatively well in a recession,” FICO Executive Vice President Jim Wehmann told CNBC, clearly quite proud to have devised a new way to score people after 64 years of business.

Wehmann says this hot and sexy new index uses data from over 70 million consumers to predict who is better positioned to withstand economic shocks, like a global pandemic or the entire planet’s butt falling off.

The occasional delinquency, which would tank your regular FICO score, isn’t given as much weight in the Resilience Index, as long as you have money in your accounts. (In other words: you can have a little delinquency, as a treat.)

Of course, if you have a lot of money in your account, you probably aren’t missing loan payments that often. So, it kind of seems like a long walk to get to the same place, to be honest.

As usual, FICO will happily distribute your private information for free to any lenders who want to take a peep. But there is not yet a way for consumers to check their own resilience score.

“We’ve got an effort underway to see if we can make it digestible and understandable and presented in a way that will be helpful to consumers,” Wehmann told CNBC.

U2 Invests in Irish Tech

The lads from U2 have gone and bloody invested in a new Irish tech fund (another thing for them to be unbearably annoying about).

Adam Clayton and a grown man who calls himself The Edge have both invested in the fund, according to Dublin-based VentureWave Capital. (No word, as of yet, if the king eejit himself is involved.)

The vaguely name “Impact Ireland” fund is targeting Irish companies with cloud-based technology, presumably in the hopes of dispersing Catholic guilt across the cloud and saving the Irish people from themselves.

The fund is currently in its second round of investment, having raised 30 million euros in its first round. But with the star power of Clayton and adult-person The Edge, the fund will aim to raise 100 million euros overall (about $112 million in real money).

With investments between 1 million euros and 25 million euros, Impact Ireland will fund up to 15 “high-growth potential and scaling Irish companies” and, honestly, I can’t wait to hear the exciting U2 album we get out it.

Former Irish leader and man who always looks like he’s trying to keep a tiny frog from leaping out of his mouth, Enda Kenny, will chair the fund’s global advisory council.

The Alligator State reported 9,636 new cases of coronavirus on Saturday, marking the highest day of new cases since this massive pain in the ass began.

Almost 140,000 Floridians have tested positive for the virus, so far, with at least 3,419 deaths. And those figures are climbing like a Spider-Man on cocaine.

Cases of the virus have surged in the weeks since the No-Dress-Code State reopened, and folks rushed back to bars and restaurants to gorge themselves on three months’ worth of Rum Runners and Cubanos. (I would.)

While some critics blame the spike in cases on increased testing, the rate of new infections far outpaces the new testing capacity and does not account for the spike in hospitalizations.

Plus, hospitalizations and deaths often occur weeks after infection. So, we likely won’t see the direct fallout from last weekend’s numbers until two to four weeks from now. (Mark your Google calendar.)

In light of the sharp incline in cases, The Florida Department of Business and Professional Regulation announced it was suspending getting blasto in bars statewide.

In addition, Miami Mayor Carlos Giménez signed an emergency order closing all beaches for the July 4 holiday weekend, cause folks can’t be trusted to go to the beach and not cough in each other’s’ mouths.

“As we continue to see more COVID-19 positive test results among young adults and rising hospitalizations, I have decided that the only prudent thing to do to tamp down this recent uptick is to crack down on recreational activities that put our overall community at higher risk,” Giménez said in a statement.

The markets have moved a lot… without going anywhere.

Despite what seems like a very busy couple of weeks, the S&P 500 has effectively gone nowhere (red rectangle below). 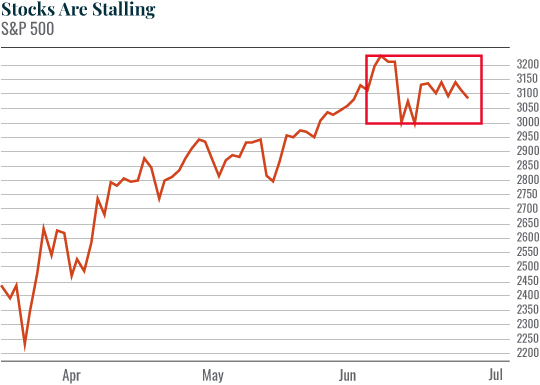 Now, we’ve had two similar consolidation periods since the markets bottomed on March 23 (blue rectangles below). And both of them were resolved with stocks moving sharply higher. 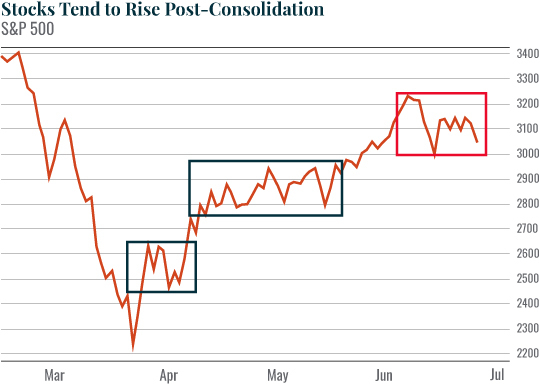 Indeed, despite all the bearishness I see in the media, stocks continue to hold their bull market trendline (blue line) as well as support (green line). 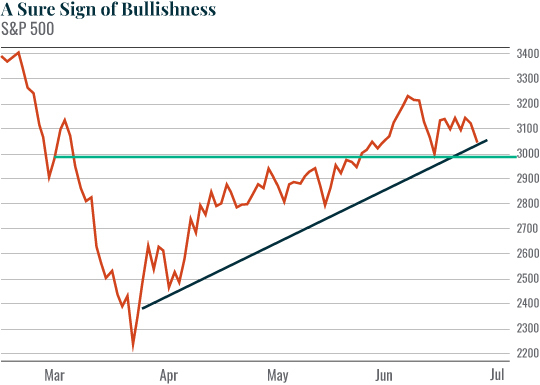 You’d think that given the fears of another round of COVID-19, as well as the continued civil unrest, that stocks would have broken at least one of these. The fact that we HAVEN’T seen a breakdown is in fact very bullish.

Indeed, it’s a hallmark of bull markets that stocks DON’T fall on bad news. That’s certainly what we are seeing today.

This is why it’s so important to look at the actual charts of the market at least once a week.

Otherwise it’s easy to get caught up in the emotions of the day-to-day moves. But once you focus on what the market is actually doing instead of how it makes you feel, the picture becomes a lot clearer.