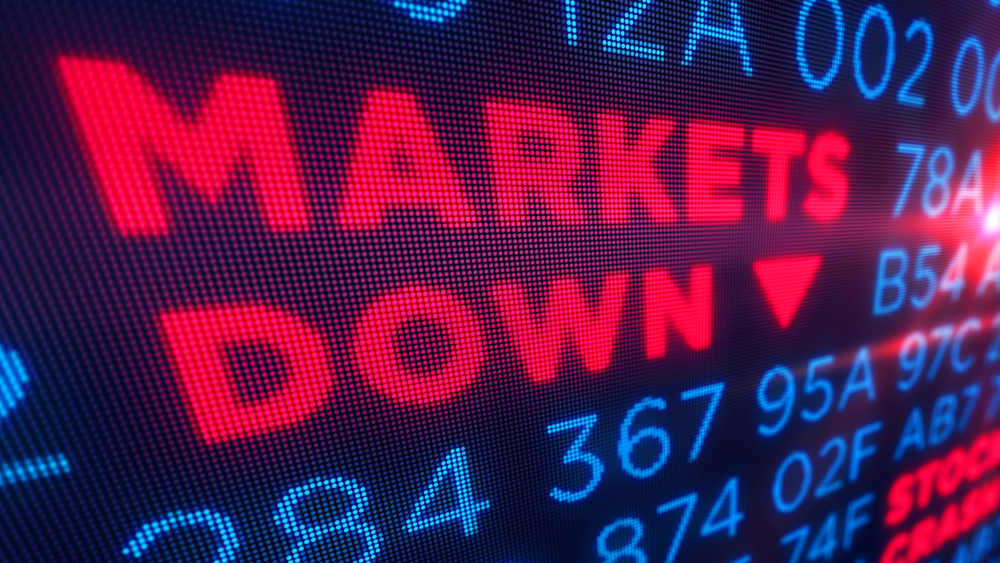 Anyone who lived through the 2008 financial crisis knows that. It’s what makes them so darn dangerous.

They build over time, quiet and slow.

Like a tropical storm booming to a Cat-5 hurricane just before it makes landfall.

That’s why we reinforce our finances when the sun is still shining. Because if we wait for signs of rain… it’s already too late.

But whispers of a 2019 recession (I’m sure you’ve heard them) are still premature.

As James Altucher points out in today’s special extended edition of Money & Crisis, there’s a big difference between a bear market and a full-blown recession.

[IMPORTANT: This does not mean to stop preparing for a financial crisis. It just means that we may have more time than we might otherwise think.]

P.S. Nothing bolsters your financial security like a secondary income. Check out James’s new book, the Side Hustle Bible. In it, James reveals 177 six-figure income opportunities to earn easy paychecks for the rest of your life — including 10 ways to make two grand in the next 48 hours. Click here to claim your free copy, now.

There Will Be No Recession In 2019

Here’s why. Here’s the counter-argument. Here’s what you should do.

A recession doesn’t mean “bear market”. A bear market is when the stock market goes down 20% or more.

A recession means two quarters in a row of negative growth in the economy.

It means people have stopped buying things and unemployment is going up.

And at the core of every recession: financial innovation gone wild.

A recession in the U.S. occurs when there is ravenous financial innovation run amok.

THE PAST THREE RECESSIONS

Collateralized mortgage debt was like an ATM machine for hedge funds and banks in the mid ’00s.

Banks took on so much debt that even a 1% downturn would cause them to go bankrupt (which they did).

(I am leaving out the change in laws about how banks valued their debt, which bracketed the recession, but it’s not that important.) 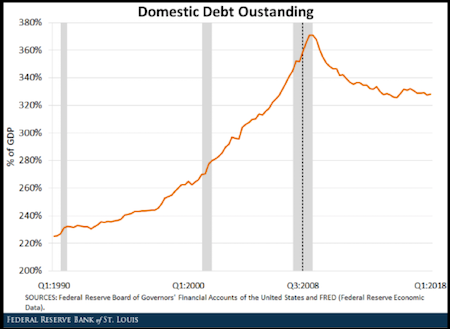 Domestic debt was INSANE in the Great Recession of 2008.

This WAS NOT a housing crisis. Don’t forget that housing prices began to decline in 2006, two years before Lehman Bros went out of business.

This was purely a crisis that occurred when a NEW FINANCIAL DEVICE caused Wall Street to go “crazy with greed”.

There has NEVER been a greater year since 1999 for IPOs. Over $70 BILLION were raised on IPOs for companies with almost zero earnings.

This WAS NOT an “internet bubble”. The internet is 1000 times bigger.

This was an IPO bubble. 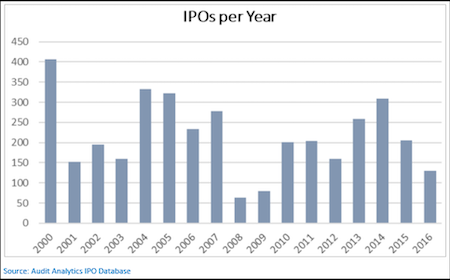 So many horrible companies went public in 2000. All dead now.

I was dead center. I remember starting a mobile software company in February of 2000 and within two months I had visits from Goldman Sachs, Morgan Stanley, Merrill Lynch, and CS First Boston — all trying to get my company to IPO.

On the back of their pitches was my potential net worth. Over a billion! On a company with zero revenues.

So banks (and corrupt savings and loans institutions) went “crazy with greed” lending to companies with the WORST credit ratings and this all fell to pieces when corruption mixed with poor lending caused junk bonds to collapse.

Again, we have a combination of war plus financial innovation.

Oil shock: Iranian revolution. And oil was a much bigger part of our economy (we did not yet have hybrids).

Inflation that was never remedied from the early ’70s when we left the gold standard. 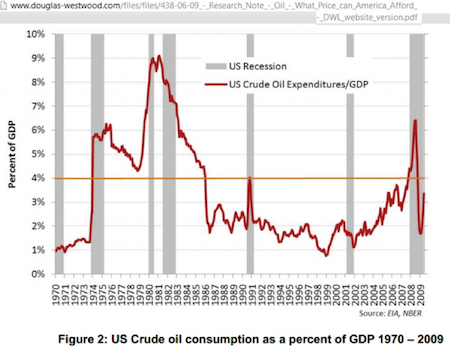 Oil prices spiked in 1980 — because of the Iran conflict — right when we were most dependent on oil and right when drillers stopped exploring in the U.S.

So: war + financial innovation (earlier removal from the gold standard).

But that wasn’t all. There was government involvement.

The Federal Reserve went crazy raising interest rates to stop inflation. They were terrified so they used the only tool at their disposal.

Less people get hired (the unemployment reached almost 11% as opposed to 3.2% now), so there is less money spent and less demand and the economy goes negative.

So… war plus the most extreme use of the tool of interest rates by the Federal Reserve.

People say we’re on the same track to recession in 2019.

While there are certainly wars around the world (there always are), there are no wars that we JUST started. Nor is there a war affecting our economic interests.

Other than cryptocurrency, which has been mostly a Silicon Valley innovation and not a Wall Street one, there hasn’t been any financial innovation affecting Wall Street banks.

Banks have been heavily regulated lately (perhaps too much so) and, if anything, have not had the opportunities to go even a little crazy (a “little crazy” is a good thing).

“But what about taxes, tariffs, and debt?”

Anything that reduces consumer demand, hurts the economy. Period.

Higher tariffs means less demand from the other 7 billion people on the planet for our products (assuming retaliatory tariffs from the countries we go to “tariff war” with).

And higher debt means the government has less money to spend on its citizens (on the surface).

So… are we in trouble?

The middle class’ highest tax rate (depending on how you define the middle class) has gone from 25% to 22%. This is good for the economy. This is the lowest in 50 or so years.

Tax repatriation (where companies can bring back dollars held in other countries in exchange for a reduced tax rate) means those dollars can now be spent in the United States. 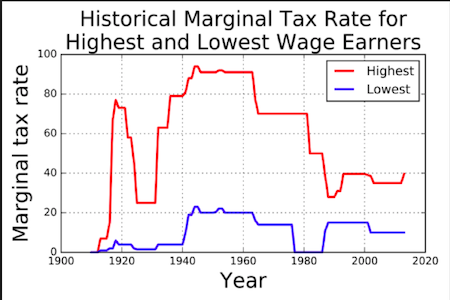 Corporations aren’t stupid. If they pay more, they charge more for their products and hire less people. Bad for economy.

When’s the last time a government agency created a cancer-curing drug or a SPACESHIP?

Tax breaks are good for innovation and give more money to the middle class.

All tariffs are bad. But countries that have unreasonable tariffs against OUR products are hurting our employees.

But while the U.S. is still the biggest consumer in the world (before China gets there 10 years from now) we still have leverage.

The U.S. is penalizing countries that have irrationally raised their tariffs to unfair levels above our tariffs.

So while we still have the upper hand as the biggest consumer in the world, let’s force them to reduce those tariffs.

Zero tariffs are the goal. But you have to fight with might. So far, tariffs have not affected the economy (look at our unemployment levels as proof). 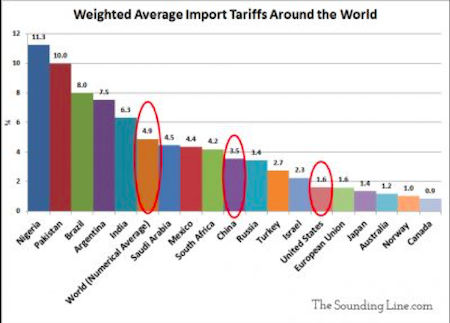 Our tariffs very much below average. Now is the time to even the field.

All we need to care about is: can the US government pay back debt?

With interest payments at an all-time low (the U.S. pays 2.2% on its debt), the U.S. has zero issue paying back its debts. And it’s gone from 15% of federal outlays to only 7%, making it easier than ever to pay back debts.

Comparisons to the Great Depression?

The Great Depression was a trifecta of sh*t.

But it’s usually a sign a big recession is about to happen. It means American consumers ARE NOT BUYING.

Guess what: Americans love to buy things. The only reason we don’t buy (trade surplus) is when we are financially hurting (future recession).

So trade deficits are a good thing. Consumers make more money so we buy and then we make more when the money eventually is spent back here.

WELL… WHAT SHOULD I DO?

Don’t panic. Live your life. Kiss someone every day.

P.S. Don’t wait for the next recession to bolster your finances. Claim your free copy of James’s Side Hustle Bible and discover 177 six-figure income opportunities to earn passive paychecks for the rest of your life. Click here to reserve your copy before it’s too late.