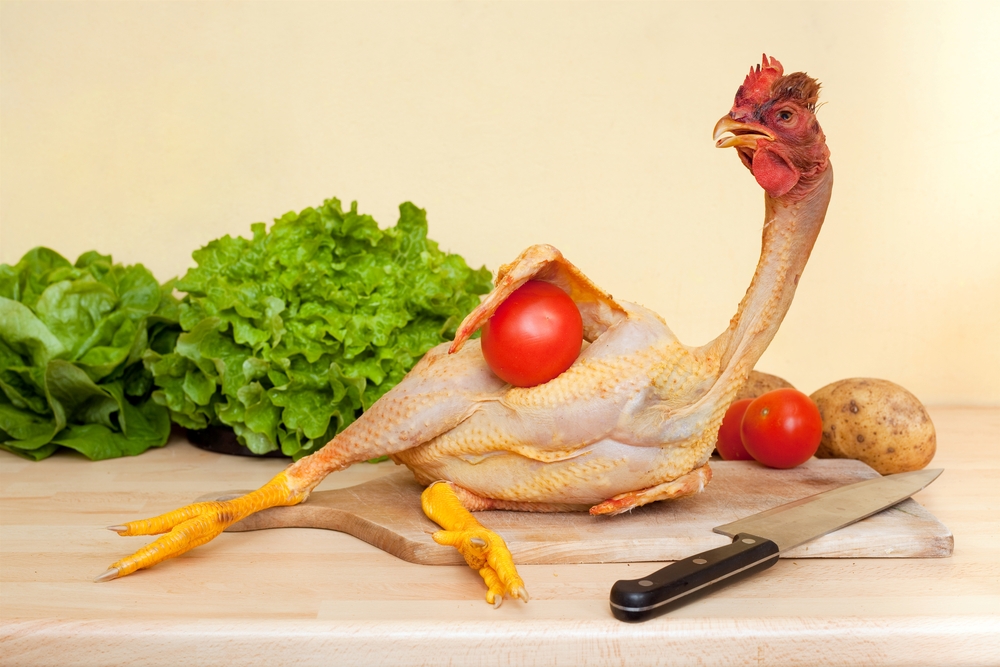 Plague of the Backyard Flock

We assume they just meant in the Cincinnati area. We also assume the signs are meant to reduce traffic deaths.

The hundreds of thousands, no, millions, of cars on the road that got individuals home to their families safe and sound.

Some, undoubtedly, saw the signs and started imagining the worst-case scenario: death.

The smell of smoldering rubber and oil… the heat and awful clinks of expanding metal… the clenching feeling of being trapped… the screams… the cries… the sirens… the momentary chaos. And then nothing.

Who would show up to my funeral? Would they cry? How will I be remembered?

We tend to take the worst-case scenario and amplify it, forgetting that the other side often shows the odds to be in our favor.

Plague of the Backyard Flock

Yesterday, along these lines, David Gonigam of 5 Min. Forecast fame, shared with me a recent warning from the CDC:

Backyard chickens are causing an “outbreak” of salmonella poisoning all across the nation.

According to the CDC, 124 people with small, backyard chicken flocks were infected with several strains of Salmonella between February and May of 2018, across 36 states.

And, the rub: According to a study conducted by California University, regulations for backyard flocks simply aren’t strong enough.

As the local food movement continues to gain ground… chickens are becoming a “thing” people do not only in rural towns anymore — but cities all across the nation.

In fact, over 500 towns and cities in the past few years have revised their laws to allow urbanites to keep chickens in the city.

Unfortunately, say the researchers, this trend puts us at risk. And we need tighter restrictions, better standards, more rules. Lest we die from an outbreak caused by tiny, free-range flocks.

Are tiny flocks of farms putting us at risk for the next Black Plague?

It’s the large-scale factory farming, by far — standards we now call “conventional,” but are, by all historical standards, incredibly radical — that hold the most risk.

Overuse of antibiotics, crowded and unsanitary conditions, unnatural feed, and a lack of diversification are the true risk-factor in agriculture.

“Factory farming,” Monica Nickelson writes in The Week, “creates perfect conditions for the proliferation of super bugs: The stress and unsanitary conditions of CAFOs weaken animals' immune systems, making them more susceptible to infection; overcrowding allows disease to spread quickly and easily; and over time, antibiotics can cause resistant strains of bacteria to evolve. These conditions, combined with a lack of diversification, create a petri dish for dangerous diseases.”

A 2010 study by Consumer Reports showed that 62 percent of chicken sold in supermarkets is contaminated with Campylobacter.

Those are factory-farmed chickens, forced to sit in tiny cages, climbing and clawing over top of one another in an effort to escape their own crap.

There are several cases to be made for a decentralized food system, which includes a chicken (or two or three or seven) for every backyard.

Domesticated Dinosaurs Are Your Friend

Chickens, the closest descendent we have to the dinos, are the most useful creature on Earth.

They are master pesticiders (eat mosquitoes, ticks and fleas)… they are expert herbiciders (they eat and clear out unwanted vegetation)… they are autonomous organic fertilizers (good for healthy lawns and gardens).

Ticks and mosquitoes are a thousand times more dangerous than any backyard chicken.

Environmentalists, moreover, should love the backyard flocks… they are solid waste management servicers. The perfect civic workers. They recycle biomass (food scraps) and divert it into eggs, easing the burden on public trash collection and landfills, and creating great fodder for the compost bin.

It’s for this precise reason city officials in Flanders, Belgium are buying laying hens to give to residents who want them.

And, so far as the dangers go…

Out of 50 million chicks hatched by mail-order hatcheries, according to the CDC’s own numbers, there were 1,120 cases of salmonella poisoning in people who also had backyard chickens last year.

(Which doesn’t necessarily mean they ALL got them from their own chickens — though it’s possible.)

Other humans are far more dangerous when it comes to disease-risk: Studies by independent labs and the NSF have found that other humans provide the most significant source of disease-causing organisms — including salmonella, coliform and e-coli.

In non-poultry keeping households, the NSF found, for example, coliform on 75% of dish sponges and rags,  45% of kitchen sinks, and 32% of countertops.

Food is another source. As far as food-borne outbreaks, 1 in 5 humans contract illnesses from food.

Dog and cats, too. They carry a whole host of health risks… toxoplasmosis, hookworm, campylobacter and MRSA have all been found on pet toys. (According to the NSF, 23% of houses had contaminated pet toys.)

I would venture to guess no chicken-keeper allows their chickens to sleep on their beds, or climb up on the countertop.

The real worry is that people take these salmonella warnings to heart — without the proper perspective — and call for strict regulations on this growing trend of chicken-keeping.

(Think about the children!)

Of course, to enforce such regulations, citizens would have to tolerate a certain amount of meddling and record-keeping in one’s backyard.

Not only would it be unnecessary, it would also be just another place where government officials would be sticking their noses where they don’t belong.

Small, self-sustaining farms are a good thing. And a long-held, necessary human tradition. Decentralized food systems is how we thrived and built civilizations.

Let’s not ruin them by allowing in the bureaucratic class, who all too often look down their noses at anything that smells like self-sufficiency.