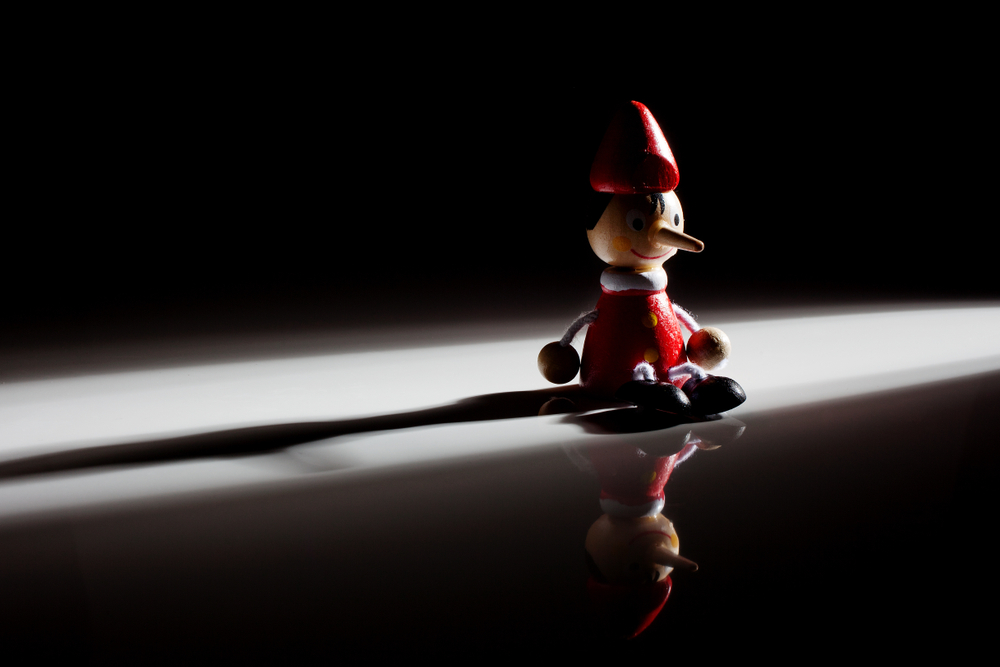 In putting together the upcoming book, “99 Things Every Millennial Man Should Know,” I’ve (re-)learned some important lessons.

One of them, weird as it sounds, has to do with Pinocchio. And the incredibly profound messages hidden beneath the surface… one of which is how victimhood turns you into a braying jackass.

But I’ll get to that in a moment.

99 Things is a compendium of powerhouse contributors imparting wisdom. 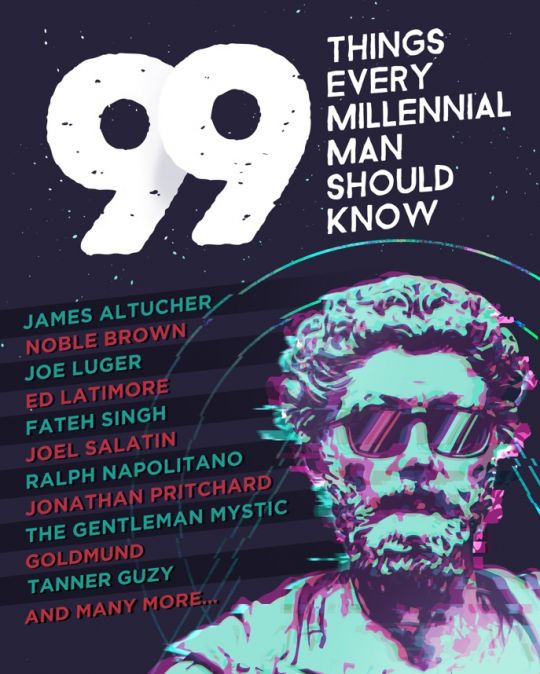 The underlying theme is answering the Call to Adventure (the “call” to your life’s purpose) and how to survive and thrive through your own “Hero’s Journey” (and, no less, the awesome power of archetypes). 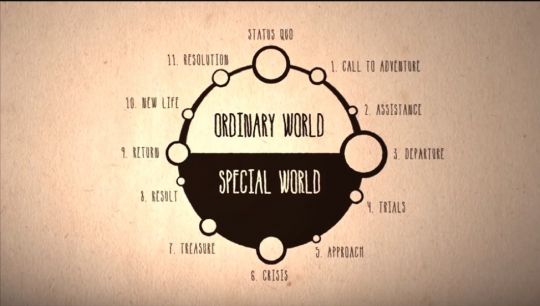 A great explainer video on the Hero’s Journey

The book, since its inception, has taken on a life of its own.

In large part because of my newfound “tribe” of people who are just as excited about, and emotionally invested in, the project as I am.

One contributor, Noble Brown (AKA, @Sociopathlete on Twitter), for example, who wrote an excellent piece for the book, called “Engineer the Future”, wrote this… 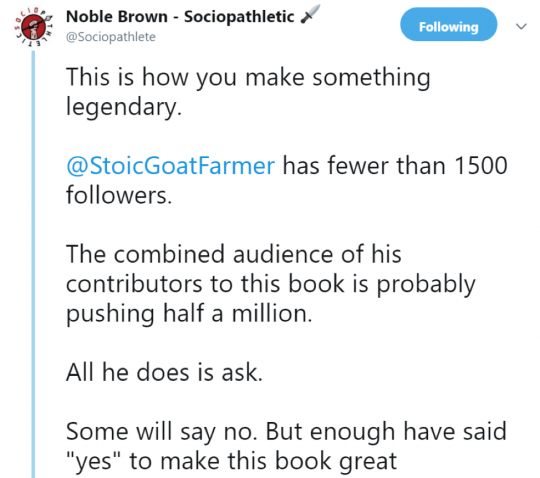 (Yes, I’m “@StoicGoatFarmer” on Twitter — which, I have found, used wisely, is a great tool. If you “do Twitter,” let’s connect.)

One, the power of the ask. It’s cliche, but I think it’s easy to forget: You never know until you ask.

Out of ten supremely bold asks, nine will probably say no or never respond, but that one yes will change everything.

(In the ask, however, increase your chances by providing unmistakable value to them.  As opposed to, “Please do this for me.” James Altucher is a master of this and has simple ways to get started.)

Second, which is tied to this: Whatever you’re doing, you don’t have to go at it alone.

Left unchecked, I easily fall into a wildly ineffective “Hercules Complex”… this assumption I should shoulder all of the burden of big projects, lest it lose its meaning.

But working with, and building a tribe of great people in the process, is so much more satisfying.

(I plan to go into more detail on this book, and how I’m putting it together, in the private Choose Yourself Publishing Circle…  It’s one great part of Altucher’s self-publishing course, of which I’m leaning on to write this book. If interested in finally crossing “write a book” off your bucket list, come… join us.)

Tonight, I’ll attempt another BIG ask… Jordan Peterson. I’m suiting up and seeing him speak in Cincinnati this evening.

His lectures have had a remarkable effect on me, especially his Jungian analysis of… this might sound weird… Pinocchio.

(Had I understood all of this earlier, as I described yesterday, I might not have been such a Hellion growing up… in a misguided pursuit of “fitting in.”)

The film Pinocchio is considered by many to be Walt Disney’s greatest achievement.

Superficially, the storyline is easy enough to understand. It’s about going from a puppet to an authentic individual. One who tells the truth, listens to one’s own conscience, and is capable of taking responsibility for one’s own life.

Pinocchio, you might recall, was brought to life by a blue fairy (the “anima,” as described by Jungians).

The fairy told him he could become a real boy if he proved himself to be “brave, truthful, and unselfish.”

Blue Fairy: You must learn to choose between right and wrong.

Pinocchio: Right and wrong? But how will I know?

The Blue Fairy: (to Pinocchio) Your conscience will tell you.

Pinocchio: What are conscience?

Jiminy Cricket: What are conscience! I’ll tell ya! A conscience is that still small voice that people won’t listen to. That’s just the trouble with the world today…

Pinocchio: Are you my conscience?

Jiminy Cricket: Who, me?

(Spoiler Alert: The cricket, as it happens, is Pinocchio’s conscience, a good, but imperfect tramp who “bugs” him throughout the movie to do the right thing.)

Going deeper, the overarching message unfolds: The best way to live your life is orient yourself toward the highest good you’re capable of imagining (represented by Geppetto, the woodcarver, wishing upon a star).

Why? Because the capacity for it to come to fruition exists. Not only that, the act of aiming there will open you up to forces which can help you — ones in which wouldn’t otherwise be available to serve you.

What is the highest aim?

To become a fully developed, authentic human being. One who isn’t a marionette. One whose strings are not whipped around by undeveloped (evil) forces of the world.

The Road to Tyranny

At one point in the movie, Pinocchio is convinced by two petty criminals — the fox and the cat — that he is a mere victim of the world. That the world is his enemy. They then lead him to Pleasure Island, a place where all his desires can be fulfilled.

There, boys can smoke, drink, fight, destroy stuff and act like heathens.

Pinocchio and Jiminy discover, however, Pleasure Island is a trap, run by masked goons dressed in black.

With enough badness under the boys’ belts (perhaps literally and figuratively), the boys lose their voices and turn into braying jackasses (donkeys), and are sold as slaves to work in the mines.

The superficial lessons of the overall story are evident:

1. Peer pressure can lead you astray.

2. Growth can emerge from pain.

3. Idle hands do the Devil’s work.

Going deeper, however, the underlying themes present in the book and film are awesome for a mere “children’s story”…

– Telling the truth will ultimately make your life easier, and taking the seemingly easy route, by lying, has consequences (the more he lied, the more his nose grew and the more complicated his life became)…
– People-pleasing does little more than turn you into a puppet, you give up your own individuality to appease them (when Pinocchio fell under the thumb of Stromboli and became an unearned celebrity he became a slave to Stromboli and the crowd)…

– You have free will not to listen to your conscience (as Pinocchio doesn’t at first) and your conscience is not omnipotent, it is capable of making mistakes (as Jiminy did). The more you listen and learn from your mistakes, however, the more both of you mature and begin to understand the true difference between right and wrong. (Pinocchio and Jiminy grow stronger as the storyline progresses).

And, very apropos to current times…

– Be wary of those who would have you believe you are a victim. Those who claim to be solely looking out for the oppressed are often on the hunt for unearned power. (Marxist professors come to mind).

– Accepting yourself as a victim, furthermore, will cause you to lose your voice and, perhaps, in the case of Pinocchio and the boys on Pleasure Island, transform you into a braying jackass.

– Great forces will emerge to help you when you aim for your highest good. You don’t have to go at it alone.

– Finally, one of the highest aims is to rescue the old structures from collapse, and reinvigorate them anew. To keep the torch alive and save what is worth saving. Otherwise, all will fall into chaos.

Pinocchio, in the end, is said to represent Geppetto’s ego and persona (how you interact with the external world and mask you wear for it).

Left undeveloped, it’ll remain a young puppet, a slave to the whims of the outside world.

In the end, Geppetto comes to terms with this “inner child” (also giving a nod to the incredible importance of fatherhood — the “outer child”)…

And, ultimately, they save one another.

Geppetto, by giving Pinocchio form and careful attention, and Pinocchio by swimming into the ocean (unconscious) and saving him from the Belly of the Whale (the archetypal Underworld of Chaos).

At the end, Geppetto, though he’s an old man, becomes young in spirit.

And the old structures worth saving in himself (and the world) are given new life, salvaged from total destruction and created anew.

I will tell Millennial Men this.

(Again, many more details about how I’m putting together the book in the private Choose Yourself Publishing Circle…  You can gain access by signing up for James Altucher’s self-publishing course. If interested in finally crossing “write a book” off your bucket list, come… join us.)