One of These Experts Is Wrong

I spend a lot of time thinking about the future.

It’s an integral part of my daily preparation when writing Money & Crisis. But the truth is, my personal goal for this e-letter isn’t about making ironclad predications.

My game is, and always has been, preparation in its purest form.

It shouldn’t matter if there’s a global, world-shaking depression… or if you fall off your bike and break your collar bone.

With the strategies you’ve picked up here, you should be financially prepared for crisis, in any shape or form.

That said, in order to makes sure you are prepared for every scenario, Money & Crisis enlists the aid of two experts in predicting trends and crisis.

These guys are some of the best on the planet at predicting massive world-shattering events.

They are plugged into a world of insider information I could never hope to access without them.

But every so often, even these guys will come to completely opposite conclusions.

The last time these guys disagreed strongly it was over the future of “bitcoin versus gold.” Never ones to shy away from a confrontation, they had it out live in a rough-and-ready debate in a New York comedy club. 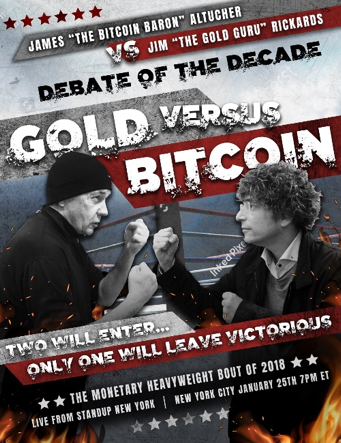 And now, before we’re even done with the first month of the year, these guys are going toe-to-toe again.

This time, the fate of the entire global economy is at stake.

Jim Rickards, economist and geopolitical expert, predicted Brexit, the financial crisis, and Trump’s election. He says we are heading for recession and it’s time to batten down the hatches.

James Altucher, entrepreneur and former hedge fund manager, predicted the rise of Facebook and the Dow 20,000. He says rumors of recession are overblown. In fact, we may be headed for a super convergence of events that will catapult the 2019 economy into the stratosphere.

Now, most mainstream publications would try and hide this kind of disagreement from their readers. (They usually just default to whichever headline aligns best with their party affiliation.)

But the only loyalties we have at Money & Crisis are to you.

I believe you deserve to have all the information. And that means presenting both sides of the argument, warts and all.

In today’s issue, you’re going to hear from Jim Rickards, who says a new recession is all but inevitable.

And you can click here to read James Altucher’s argument for no recession, which was originally published earlier this month.

Draw your own conclusions. But no matter what you decide, remember: there’s no excuse for not being prepared.

P.S. After more than a decade of secrets, Jim Rickards has revealed the incredible secret behind his predictions.

Post 9/11, Jim was involved with developing a special tool with the U.S. government. This powerful tool, known as Project Prophesy, can predict surprising political and economic events before they happen.

Rickards: The Slowdown Is Already Here

Investors know that China recently reported its worst quarterly growth ever. What they may not know is that this weak growth is not just a temporary blip but is part of a downtrend that has far to run.

The implications of this slowdown in Chinese growth are extremely negative for the world as whole.

China’s economy grew at an annual rate of 6.4% in the fourth quarter of 2018. That’s the lowest quarterly growth rate ever reported by China. Yet even that growth rate is overstated.

Much of that growth is investment and as much as half of Chinese investment is wasted on industrial overcapacity, white elephant infrastructure and ghost cities financed with unpayable debt.

Tellingly, China’s 2018 growth was the lowest rate since 1990. All signs are that this slowdown is not temporary but will grow worse in 2019 and beyond.

But what happens in China does not stay in China.

This weak growth affects not only China but also its trading partners. Slow growth for China means slower growth for the world. Slow growth in China means fewer purchases of commodities from countries like Australia, Brazil and Iran. It also means less outbound investment by China in places like Canada and the U.K.

Weak growth could be a major contributor to recession in its trading partners and possible a global recession, the first since the financial panic of 2008.

But the time for warnings of a global slowdown are over. The slowdown is already here.

A recent Reuters article reveals that global trade volumes are in decline, air freight volumes in Hong Kong were down 5% in December and certain economies outside the U.S. (Germany, France, Japan and Italy) showed negative growth or material slowing in the second half of 2018.

Most striking is the fact that the Organization for Economic Cooperation and Development (OECD) composite leading indicator fell to 99.3 in November 2018.

The point is that the slowdown is not just coming. It has already arrived.

Over the past few months, I’ve highlighted warnings of slower growth, excessive debt and the potential for a new market crash coming not just from the usual perma-bears but from prominent officials in the international monetary system.

These include establishment figures like Christine Lagarde of the IMF, economists from the BIS and preeminent academics like Larry Summers of Harvard and many others.

When even these people are talking about trouble ahead, it’s time to get serious.

The time to brace for a recession is now. I suggest you reduce allocations to risky assets (stocks, corporate debt, emerging markets) and increase allocations to cash and gold while you still have the chance.