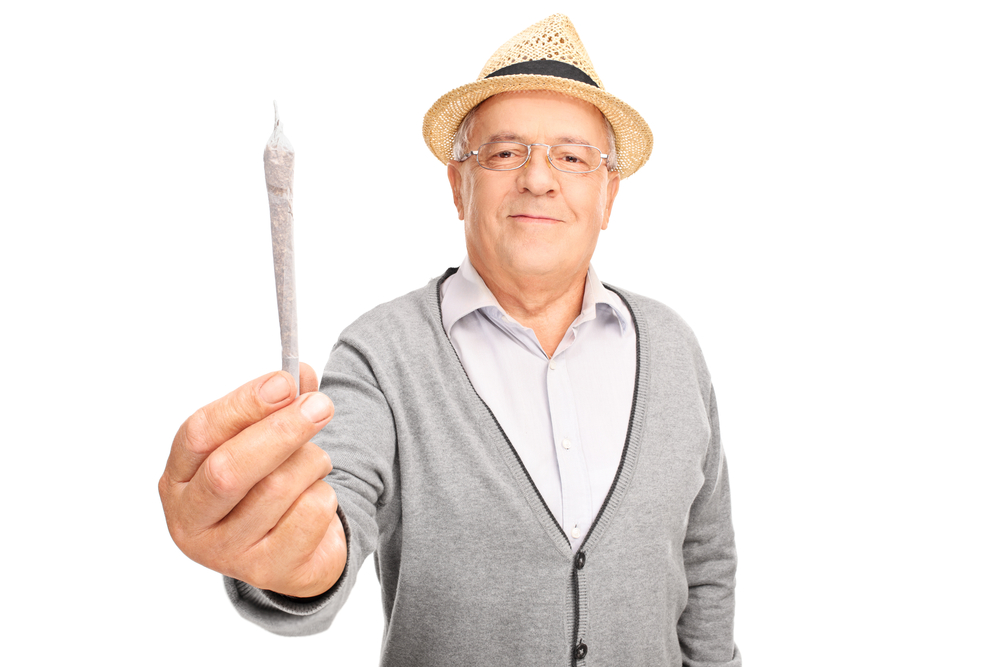 Not Your Granddaddy's Retirement Plan

He sold weed in high school, peddling quarter bags for $19 to help out his dad with the bills.

After high school, he left the black market pot biz and worked as an electrician and entrepreneur.

One day, however, his brother-in-law, Steve, pitched him a flashback-inducing idea:

There’s a company growing weed in Alberta. We should invest.

“Steve’s a pretty conservative guy; I thought he was kidding,” Terry, 53, told reporters. “But he wasn’t.”

This was back when the company in question, Aurora Cannabis, was just a pipsqueak.

Fast-forward to today, Terry and Steve are sitting pretty. From a relatively small grubstake, their combined stakes are worth approximately $200 million.

And Terry and Steve are far from alone…

“Insiders have created a huge amount of wealth for themselves and even early investors,” PI Financial analyst Jason Zandberg told the Financial Post. “It reminds me of back in the dot com days. You always heard of a friend of a friend who got in early and got their company bought out.”

There’s a big difference, however, from the dot com boom and today’s marijuana markets…

Dot com had virtually zero regulations holding it back.

The marijuana market, on the other hand, is like a tennis ball taped to the bottom of a swimming pool.

In the words of BTO: “You ain’t seen nothin’ yet.”

The First Round of Marijuana Millionaires

In 2012, as you may know, two states — Washington and Colorado — took the plunge first and introduced legislation that allowed for recreational use of marijuana.

In both states, 55% of the population voted “Yea”…

Marijuana retailers in Colorado started opening up in 2014.

“That’s all it took for some people to make a lot of money,” says pot stock maven Ray Blanco.

“Despite governments’ tight regulation on marijuana,” Blanco writes, “several marijuana-related companies managed to make it onto major stock markets. And when marijuana became legal in two U.S. states, shares of these trailblazing companies shot up like a rocket.”

Just one of their products contained cannabinoids.

“There was also Fusion Pharm,” Blanco points out, “another company specializing in technology that could help marijuana farmers. Its shares went as high as 2,269% after Colorado’s pot retailers opened for business.

“The story was repeated in other companies, too like CV Sciences… Easton Pharmaceuticals… CannaBusiness Group…”

They all flew through the roof… all because TWO states in the U.S. legalized marijuana.

Now that several more states are set to join the legal marijuana club, says Blanco, history is set to repeat itself.

“Frankly,” he says, “I think the same thing will happen again.”

A total of 33 states and D.C. have passed laws broadly legalizing marijuana in some form.

Ten states have adopted laws legalizing it for recreational use.

The map below from Governing.com shows where we currently stand (as of Nov. 2018)… 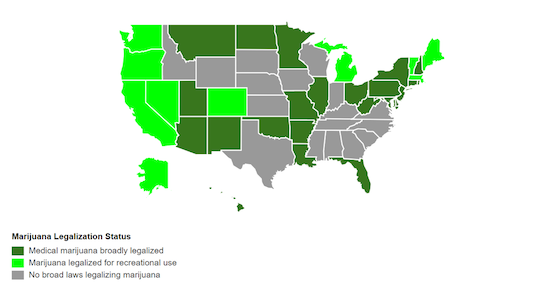 Marijuana is still illegal on a federal level…

We’re still in the “Bronze Age” of marijuana markets, where big banks can’t deal with cannabis companies without the threat of feds busting through their doors (which, among other things, could seriously put a damper on any “bring your dog to work day”).

But there’s no putting the toothpaste back in the tube.

According to one national survey, conducted by the Office of National Drug Policy, approximately 6,000 Americans try marijuana for the first time each day.

Since 2015, according to cannabis industry research firm ArcView Group, legal marijuana has become the fastest growing industry in the U.S.

If marijuana becomes legal in all 50 states within the next decade (which, at this rate, as you’ll see, is likely), the industry will be larger than the organic food market.

There are 350 publicly traded marijuana companies out there.

You’d probably do OK choosing a few at random… just set it and forget it.

But Blanco and his team have traveled all across America, attending all of the major pot conventions, picking apart all 350 of them using their 5-part filtering system.

They’ve pulled out just FOUR with immediate catalysts… that could explode in the coming weeks.

“I’ve boiled down 350 plays into just four plays that are the very, very best ones that could make you money.”

And for a limited time, he’s offering them up in his FREE pot stock guide.

To get started, says Blanco:

You do NOT need to know anything about Pot (in fact, the less you know, the better… since you won’t be biased)…

You do NOT need to know anything about investing…

And you do NOT need a lot of free time.