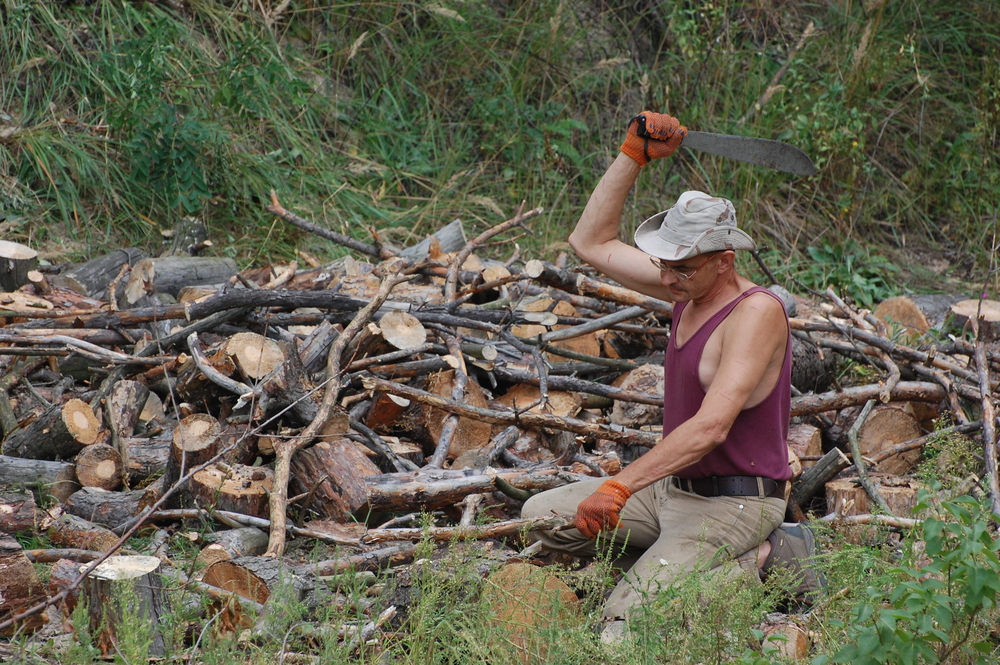 No Power? No Problem. Pick up a Machete and Get to Work

In my time with the government, I worked alongside many different agencies and — I know this won’t come as a surprise to you — I witnessed government incompetence in every organization. There isn’t a single government agency that’s immune to it.

Which is why part of my goal with this publication is to help you prepare to fend for yourself during and after a major disaster — you never, ever want to rely on the government.

But that doesn’t mean you’re in it alone…

Check out the first of this week’s must-read articles for a great example of a community helping themselves by helping each other. Then read on to discover when the world will run out of food, a toxic side effect of floods and how to survive a plane crash.

It has been 146 days since Hurricane Maria made landfall in Puerto Rico and according to the U.S. Department of Energy, 29% of the island’s power customers don’t have electricity.

However, that numbers actually equals far more residents in the dark. As this piece from Vox explains, “That translates to 40% of the island’s population, because ‘customer’ refers to a power meter, and each meter can represent multiple people living in the same house.”

Well, people in Coamo are fed up and finally taking matters into their own hands. The 40,000 residents of this southern mountain town have been in the dark for over four months. So in mid-January, groups of volunteers organized themselves and started restoring power on their own.

There’s a lot of work to be done, from unearthing fallen lines to clearing debris to digging holes for posts. But the fact is remarkable things can happen when people work together — and the people of Coamo have some serious motivation.

2. The Most Indispensable Survival and Bushcraft Tool

This powerful survival tool can do it all. It can hack through overgrown brush, vines, rope, even clear small trees and limbs with absolute ease. It can also take out larger logs and trees as needed with the double-bladed saw on the back of the blade.

This versatile knife also comes with a serrated handle and hammer that can be used for blunt-force operations. You can use it to grind, saw and crack open nuts and bone (marrow is a terrific food source). Plus, it can be used to break glass in an emergency.

Any job you can imagine — this chopping machine is up to task. Get one of these incredible tools for yourself by clicking on the link above. You never know what you might need it for…

3. Floods Are Getting Worse, and 2,500 Chemical Sites Lie in the Water’s Path

Last year, we witnessed historic flooding across the United States. California saw its wettest winter in a century, in which epic amounts of rain caused massive floods and deadly landslides and threatened to burst dams. In the spring, various parts of Oklahoma, Missouri and Arkansas reported record-high water levels.

Then this fall, three back-to-back Category 4 hurricanes made landfall in the U.S. Harvey dumped 24.5 trillion gallons of water on southeast Texas and Louisiana, Irma prompted the largest mass evacuation in U.S. history and residents of Puerto Rico (as we discussed above) are still dealing with the fallout from Hurricane Maria.

As if this wasn’t bad enough, The New York Times reports that “anchored in flood-prone areas in every American state are more than 2,500 sites that handle toxic chemicals… About 1,400 are located in areas at highest risk of flooding.”

All this is to say that when it comes to emergency preparedness, it’s not enough to simply be prepared for the initial disaster. Some catastrophes set off a chain reaction. Know the potential risks — likely and less likely — for your area and have multiple plans in place so you can be ready for anything.

4. Can Planet Earth Feed 10 Billion People? Humanity Has 30 Years to Find Out

By 2050, there will be an estimated 10 billion people living on planet Earth. The big question is will we be able to produce enough food to feed a population that large?

Food scarcity is a terrifying prospect. And long before it becomes a global issue, certain areas will feel the squeeze as climate change alters regional food production and natural disasters destroy crops. That’s why stocking up on emergency food should be one of your top prepping priorities.

Start by gathering a supply that will sustain you and your family for 30 days — then build from there. Don’t forget about food storage for your pets. Make sure you have a 30-day supply for them too.

Flying is relatively safe compared with other forms of transportation, but accidents do happen. Based on what we see on the news, it’s easy to assume that all plane crashes are equally deadly and you have no chance of surviving whatsoever (case in point above).

The truth is most passengers don’t die from the crash itself but from the smoke inhalation that takes place in fires after impact. According to the Federal Aviation Administration (FAA), passengers have approximately 90 seconds to evacuate after a crash in order to survive.

This is why I recommend keeping your shoes on throughout the flight, knowing your exits and booking a seat within five rows of an emergency door. If you’re faced with disaster, be ready to move and leave all personal belongings behind. Things can be replaced — you can’t be.