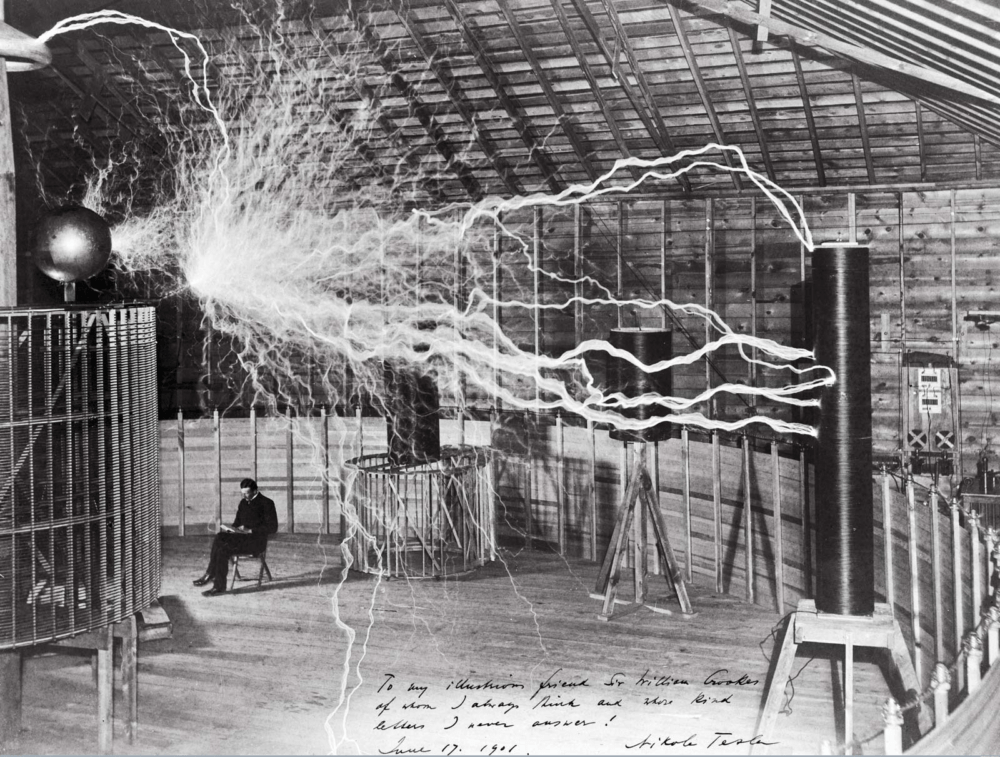 Shares of Tesla surged nearly 8% to more than $1,000 a share yesterday, following a leaked email from CEO Elon Musk, demanding Tesla workers give him a semi (truck).

Musk’s email came just a week after a fresh-faced EV competitor debuted its stock on the public market.

The Phoenix, Arizona-based Nikola Corporation (which I’m sure won’t be confusing at all) has yet to ship a single vehicle. Yet its shares have doubled in price over the week, closing Wednesday’s session at $65.

This gives Nikola a market valuation of nearly $30 billion, which is up there with Ford, a company that has been known to ship a vehicle or two. 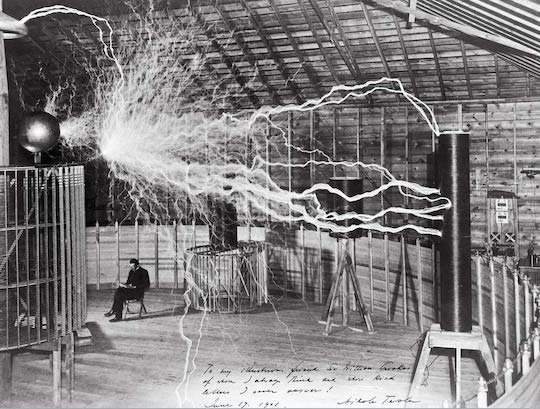 Nikola Tesla is idolized by electricity nerds because he liked to shoot electricity at stuff. Oh, and he also fell madly in love with a pigeon. That doesn’t come up quite as much.

Investors embracing Nikola with open arms got Elon all hot and bothered under the collar of his nondescript black t-shirt. He emailed Tesla staff, saying it was “time to go all out” and bring the long-delayed Tesla semi-truck to volume production.

(Elon Translator: “Time to go all out” is a trope in anime when the main character is being beaten and they have to unleash the full might of their power to win. This man runs a company with a $185 billion market cap.)

That the billionaire anime boy is tapping the semi-truck as his weapon of choice in this battle is no coincidence. Nikola sued Tesla two years ago, alleging the design for the Tesla semi-truck was ripped off from Nikola’s own design. That legal battle is ongoing and will likely influence how this semi-shaking competition will pan out.

Elon’s electric semi was slated for production for 2019, but Tesla announced recently it had pushed the release date until sometime next year. It’s unclear what difference, if any, Elon’s email will have on that timescale, but investors seemed to like it.

Tesla’s stocked jumped nearly 8% to an all-time high, after Musk’s email leaked to Reuters. (I say leaked but I’m pretty sure the whole point of the email was for it to be leaked.)

Elon responded to the news of Tesla’s record high on Twitter in a typically Muskian fashion.

Amazon announced a ban on police use of its facial recognition software for one year, citing unethical uses of the technology like racial profiling and drawing faces on butts and entering them into the system as wanted criminals.

Amazon’s totally original idea, that it came up with on its own, comes just two days after IBM pulled its facial recognition business and called on Congress to enact reforms to advance racial justice.

“We’ve advocated that governments should put in place stronger regulations to govern the ethical use of facial recognition technology, and in recent days, Congress appears ready to take on this challenge,” said Amazon, begging to be regulated like one of those Batman villains who clearly gets off on getting their ass kicked by Batman.

“We hope this one-year moratorium might give Congress enough time to implement appropriate rules, and we stand ready to help if requested.”

Facial-recognition technology has been criticized by human rights activists for being dangerously inaccurate and more prone to misidentifying faces with darker skin.

Not so long ago, you’ll recall that Amazon’s Rekognition (yes, that’s really what they called it) was tested on Congress, and misidentified 28 members of the House as entirely different people who had been arrested for crimes. 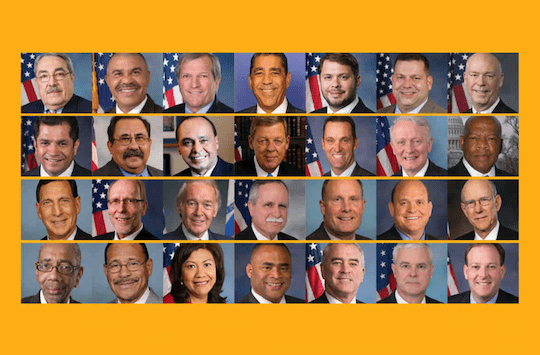 All politicians are crooks, of course, but Amazon’s tech identified these 28 members of Congress as 28 entirely separate people with criminal records.

These concerns have resurfaced as policing tactics have come under intense scrutiny in the wake of George Floyd’s killing.

It’s difficult to know if Amazon would have banned the use of its tech if IBM decision hadn’t shifted the spotlight to them. But I would bet my best friend’s left testicle that Jeff Bezos wouldn’t axe a cash cow like Rekognition just because of some criticism from human rights groups.

How to Profit from a Bond Collapse

If Graham’s right, we could see a nasty drop in the bond market in the coming weeks. But, as readers of Strategic Impact know, Graham always has a strategy for making a profit.

How to Profit from a Bond Collapse

Yesterday I outlined my concerns with the Treasury market.

For those of you who missed it, the rundown of my framework is as follows:

Add it all up, and the US will likely issue $5 if not $6 trillion in new debt this year. And this is on top of the trillions of dollars’ worth of debt it needs to roll over.

The Treasury market is signaling this might be too much for it to handle at current yield levels.

Warning Signs from the Bond Market

The long-term Treasury ETF (TLT) is a good proxy for the long end of the bond curve. And this chart is telling us that we could see a nasty drop in the bond in the coming weeks.

TLT is sitting on support (green line below) in the middle of a massive expanding pattern. A break below that green line would mean a sharp plunge to 145. 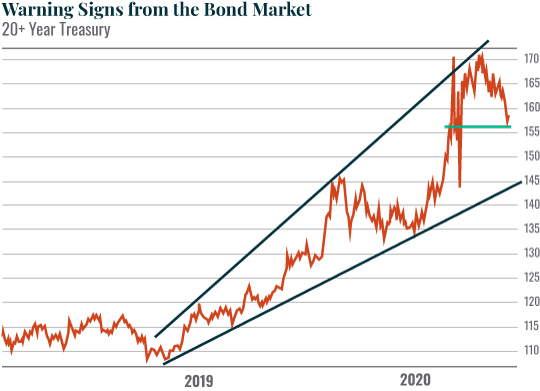 One way of profiting from this would be the UltraShort Long Treasury ETF (TBT).

I want to stress that you should NOT consider opening this trade until TLT breaks below support (the green line in the chart above).

So put this on your watch list for now.

(Editor’s note: For more of Graham’s cutting-edge investment ideas, check out Strategic Impact. In this monthly investment expose, Graham pulls back the curtain on what’s happening “behind the scenes” in the financial markets and gives readers unique investment ideas to profit off those incredible revelations. Click here to find out more.)

Yesterday, I received the single most unique correspondence from a reader I have ever received in the history of my career. It was something I don’t think I’ve ever seen anywhere before: a heartfelt POEM about investing. I knew immediately I had to print it.

Spinning the breeze
Blowing toward the silver an gold flow.
Had 35 dollar silver
A long while ago.
Gold stocks staying flat
With little fits toward up
Seems too slow.
So what stocks
Are going well
In this scenario?
Alan

Bravo! Bravo! I have no idea what constitutes a good poem, or whether or not ‘Alan’ is the name of the poet or the last line of the poem, but this is undoubtedly the best poem I’ve ever read.