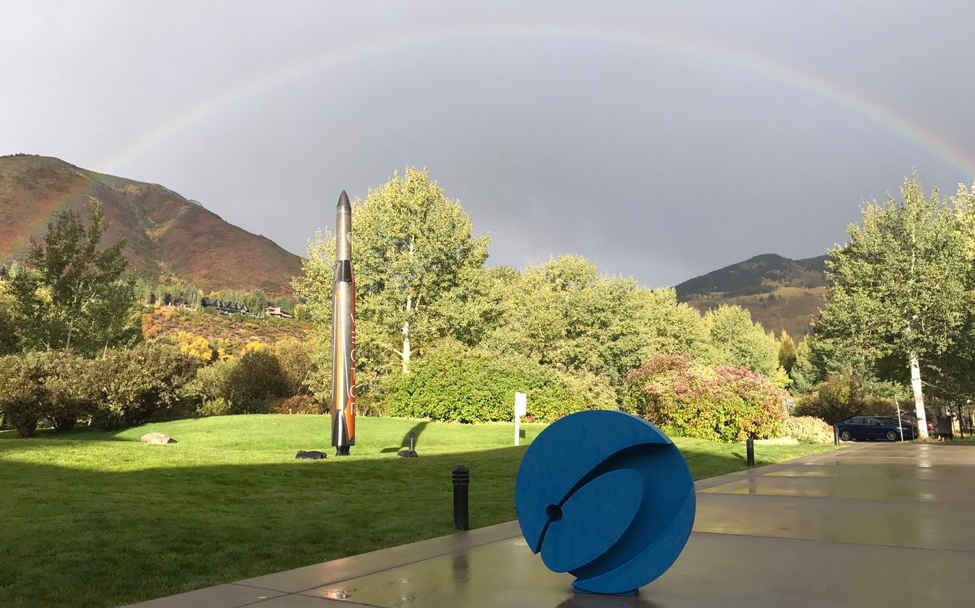 Nexus 2017: When the Stars Aligned

“Here’s to the crazy ones. The misfits. The rebels. The troublemakers. The round pegs in the square holes. The ones who see things differently. They’re not fond of rules. And they have no respect for the status quo. You can quote them, disagree with them, glorify or vilify them. About the only thing you can’t do is ignore them. Because they change things. They push the human race forward. And while some may see them as the crazy ones, we see genius. Because the people who are crazy enough to think they can change the world, are the ones who do.”
― Rob Siltanen

Last month, you might recall, just after viewing the Great American Eclipse, I met a twitchy-eyed man at a gas station in Oregon whom I later affectionately dubbed “Wild-Eyed Willy.”

Willy claimed he hadn’t seen the moon in three full nights and predicted, with not a quiver of doubt in his voice, the coming of the Rapture.

He even knew the precise date it would happen. It was to be written in the sky for all who cared to look in a rare alignment of the stars on September 23, 2017.

He gravely advised yours truly to get my house in order beforehand, for that would be the day those stars would surely loosen and fall from the sky and the whole world would witness man reap what he has so imprudently sown.

But, despite the Willies of the world — the sometimes well-intentioned doom merchants turned Chicken Littles — rather than a disaster of Biblical proportions on September 23,  something else, something pretty miraculous, happened.

And it happened right where I sat taking notes — right here in Aspen, Colorado. Right here at the Nexus Conference. 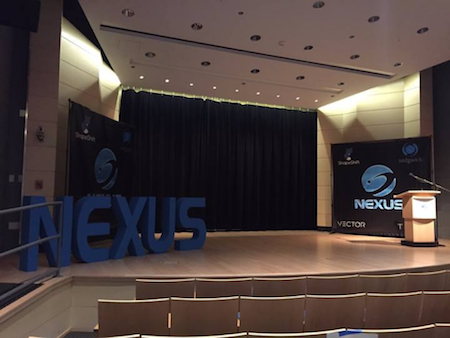 It was Bitcoin entrepreneur Roger Ver, the so-called “Bitcoin Jesus,” who I first heard put it into words:

“Here we are,” he said during a great panel discussion on the future of crypto, “at one of most prestigious event centers in the entire country where some really high power events have taken place. We’re here at the Aspen Institute talking about cryptocurrencies…” 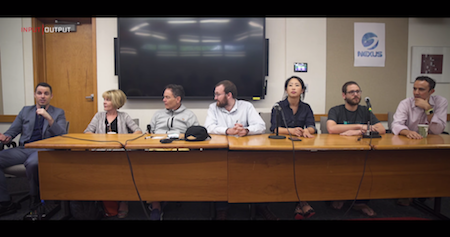 Indeed. As the stars aligned over the ice capped and cloud quenched mountains of Aspen, CO., some of the best thought leaders in the freedom, decentralization and cryptocurrency movements took over one of the elite’s very own favored hobnobs.

And many of them, behind wide open doors, concocted “conspiracies” of their own, often consisting of three key components:

A] Disrupting the world’s most powerful institutions, transforming the logic of violence, and forcing the PTWs (“Powers That Were”) to compete on a level playing field…

C] Taking back the good green Earth and… wait for it… letting it be.

And, yes, some even envisioned… not completely unlike our wild-eyed Oregonian friend… what might it be like to see “The Man” reap what he has oh so surely sown. 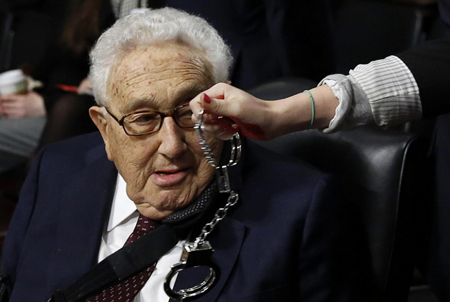 Our job as roving reporter at Nexus 2017 was, as per usual, to be a mere fly on the wall. To report back to you our own observed highlights. And we did what we could, I assure you, despite the embarrassment of wisdom, to maintain focus.

“OK,” moderator of the aforementioned panel, Max Keiser, interjected, with Roger Ver still on the hot seat, “so when you see a state actor like China looking like they’re trying to ban bitcoin, etc., is that a factor going forward or are they barking up the wrong tree?”

“That’s probably a signal,” Ver said, not missing a beat, “we should buy more. Because China has already banned Youtube, they banned Google, they banned Facebook, they banned Twitter. And if you would’ve invested in any of those things early on, you would have done very very well.”

‘They’ Are Those Who Will Not Leave Us Alone

If you’re just now catching up, you might be wondering what, exactly, Nexus is.

Well, long-time sufferers of our daily missives know we made our first mention of the project early this year. (See: One Currency to Disturb the Universe, which includes a great explainer article by Nexus team member gjsteele71.)

Nexus, in short, is a centralization-resistant, scalable, quantum-proof currency with micro-transaction capabilities that will, according to the vision, operate through a sovereign mesh network of surprisingly cost-effective low-orbit cube satellites.

But it’s much more than that.

Nexus also has the potential to be an incredibly significant upgrade to one astonishing concept that, astonishingly, simply refuses to die.

As the 26 year-old crypto savant and founder of Nexus, Colin Cantrell, said during his Nexus: State of the Union speech:

“Bitcoin was kind of left unfinished. Satoshi left after Wikileaks… because Satoshi knew the battering of the beehive Bitcoin would really do.

“In the words of [Freedom Phoenix’s] Ernest Hancock,” said Colin, “‘They’ are those who will not leave us alone.”

“When you start to understand the truth about everything, it’s kind of scary. This world is run by criminals. So what are we going to do about it? Blockchain is that solution. And that’s why Nexus development started in 2014.

“There’s so much happening right now we can solve with immutable ledgers. We can solve it by distributing the system out. It’s us who give power to the government. It’s us that gives power to the system. By believing in that power. And by having new alternative systems to create, like we can with bitcoin, with Nexus, with cryptocurrencies, they allow us to take that power and put it in our own hands.”

[More on Colin’s vision and the future of Nexus in tomorrow’s episode.]

“What I want to talk about is the role of technology and revolution,” Colin’s father, Jim Cantrell, began in his speech, Liberty Through Technical Innovation. 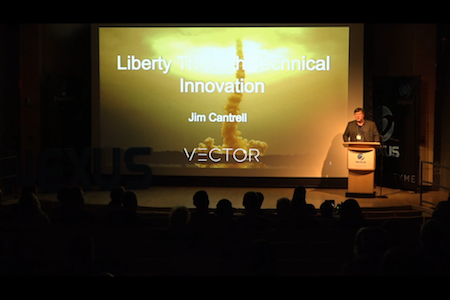 Jim, if you’re not aware, is one of the leading minds in the race to populate the Final Frontier.

After earning his chops at the French Space Agency, CNES, in 1990 and later the NASA Jet Propulsion Lab, Jim worked as an aerospace consultant until he received a strange phone call from an even stranger man named Elon Musk, with whom, later, he co-founded a little company called SpaceX.

Much later, after parting ways with SpaceX, Jim had an epiphany about the “next big thing” in the Space Race and founded Vector Space Systems.

Today, Vector is launching rockets for one-twentieth the cost of SpaceX and wants, in the words of Business Insider, “to do for spaceflight what Apple CEO Steve Jobs did for so many other industries: Revolutionize it.”

Jim, like Colin, is incredibly optimistic about technology’s ability to slough off arbitrary power and free the individual to reach his or her true potential. 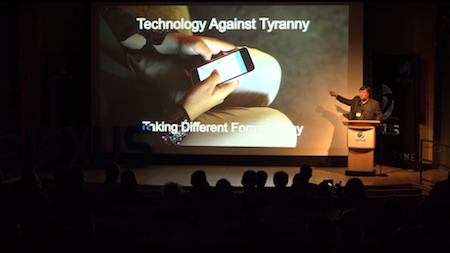 Jim prodded the audience to remember who we are: The human is a brave, pioneering creature. We’ve faced enormous and brutal adversity throughout our long and storied history and, lo and behold, here we are — we’ve survived all of it.

And, if Jim and Colin are right, we will continue to not only survive, but flourish and thrive, despite what the Wild-Eyed Willies of the world try to tell us, intentionally or not, to keep us cowering in fear.

“Can you imagine what Europe was like in the 1800’s?” Jim asked. “Little tiny villages, comfortable to live there. Hell, you didn’t even have photography. You didn’t know where you were going. You get on a boat, someone says ‘Oh, it’s paved in gold. You’ll have a job.’ You take your family and you go.

“Those were some brave souls that did that. We still have that spirit in our species. This is who we are. We wander. We move out. We do things. And guess what? The government follows us. It doesn’t lead us there.” 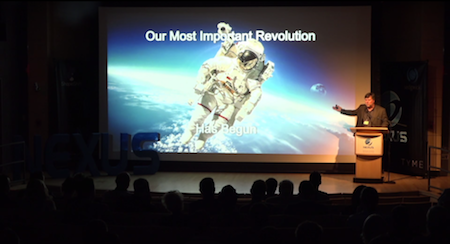 More on all of that, and the future of Nexus, in tomorrow’s episode.