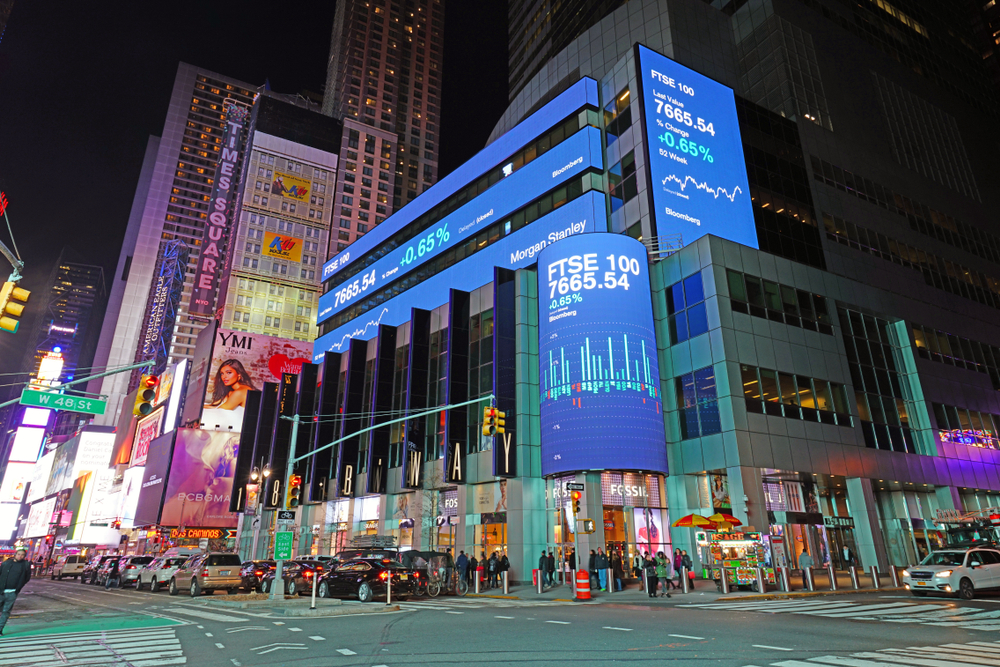 Morgan Stanley cut 1,500 jobs two weeks before the holidays because we all live in a hacky 90s Christmas movie where bankers are cartoon villains with pencil mustaches.

The cuts represent about 2% of the multinational investment bank’s 60,000 employees (so, statistically, this should result in anywhere between five and 20 instances of Clark Griswald-esque hijinks).

Morgan Stanley had a relatively good year, posting $10.1 billion in revenue in Q3 of 2019, blasting analysts’ average estimates by $500 million.

However, a source for CNBC says bank execs are anxious about the global economic outlook for 2019. (And nothing clears my anxiety like canning a bunch of dudes.)

Since we all had our collective ass kicked by the 2008 financial crisis, it’s become pretty common practice on Wall Street to conduct layoffs during the holiday season.

This way, you can avoid paying out annual bonuses while maximizing your SPP (sadness per person).

The announcement from Morgan Stanley, which the media is referring to as The Christmas Canning (and by “the media,” I mean me), is the first of this holiday season. But analysts are expecting other firms to announce similar cuts in the coming weeks.

The U.S. economy has been unexpectedly resilient in the face of a never-ending trade war with China. But several trends in technology and AI have the entire financial industry on the back loafer.

According to an October study by Wells Fargo banking analyst and man-with-the-whitest-sounding-name-ever Mike Mayo, the number of jobs in the U.S. banking industry will decline by about 200,000 over the next decade.

“New job additions could make the reductions less but our conclusion is still that this will be the biggest reduction in US bank headcount in history,” wrote the Mayo man.

Earlier this year, European banks got a head start on the mass canning, with Deutsche Bank announcing 18,000 cuts in July, HSBC slashing about 10,000 jobs, and Commerzbank demoting 4,300 employees to loyal customers.

In other Morgan Stanley related news, the investment bank was fined $22 million by French authorities today over allegations of a “pump and dump” scheme to manipulate bond prices.

U.S. and Chinese negotiators are playing footsie under the table, laying the groundwork to delay the next round of tariffs, according to a report by the Wall Street Journal.

The next round of tariffs are scheduled to go into effect this Sunday Dec. 15 and just absolutely devastate global brunch plans.

If a resolution to the trade talks has not been reached by then, the U.S. has said it will levy tariffs of 15% on $160 billion of Chinese goods, including laptops, phones, toys, clothes, and pretty much anything fun that comes out of China (which is why I did my Christmas shopping eight months ago in a Buc-ee’s gas station).

According to the WSJ, Steven Mnuchin and Robert Lighthizer (celebrity couple name: Mnuchhizer) are formulating a back-up plan to delay the tariffs as they continue to haggle about the terms of a phase one deal.

President Trump has been adamant that the tariffs will go into effect (and Xi Jinping will not be getting a Christmas card from the Trumps) if a deal is not reached before this weekend.

However, officials on both sides have been hinting that the deadline could be extended. On Friday last week, White House economic adviser Larry Kudlow said in two separate interviews that there are “no arbitrary deadlines” for the tariffs.

But Kudlow, who has had at least one heart attack serving this administration, also told the Wall Street Journal that the Dec. 15 deadline is still on the table if President Trump is not satisfied with how the talks are progressing.

“If it’s not the kind of deal he wants, then the Dec. 15 scheduled tariffs will go back into place,” said Kudlow.

Investors, who have been burned one too many times by “according to people familiar with the situation,” remained skeptical that the U.S. would postpone the tariffs and the stock market remained largely unchanged by the news.

The D Breaks $10B at the Box Office

Disney took a big old step towards becoming the only media company in the world this weekend, as the House of Mouse (and Every Major Film Franchise) revealed it raked in more than $10 billion at the box office this year.

This is the first time any one film company has brought in more than $10 billion.

The previous record, clocking in at a paltry $7.66 billion, was set in 2016 by a little know film studio called (checks notes) also Disney.

Disney pulled off this astounding feat of taking money from over there and moving it over here by blocking out six spots on the top-ten grossing movies of the year.

(This list is was Martin Scorsese sees when he eats too much cheese before bedtime.)

As you can see, Walt Disney’s Insatiable Franchise Monster has had five movies that grossed more than a billion dollars this year so far.

Frozen II will likely tick over to a billion before this week is out. And the finale in the nine-movie Star Wars Saga will ring out the year with J.J. Abrams’ Star Wars Episode IX: The Rise of Cardio. 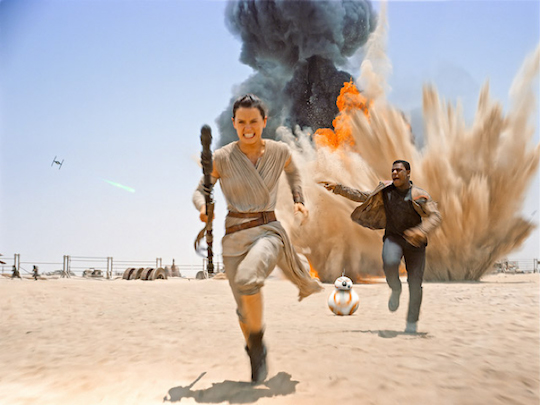 Somewhere in J.J. Abrams’ office is a post-it note that reads
“running=plot?”

It’s worth noting that this report doesn’t include the movies it acquired in the acquisition of 20th Century Fox earlier this year, after which the total takings are probably closer to $12 billion.

That said, the eagle-eyed among you (or even just those who are just wearing their reading glasses) may have noticed something not-quite-right about the above list.

Every single Disney movie in the top 10 this year was either a sequel, continuation of a franchise, or a napkin that read “just do the Lion King again?”

The company leaned heavily on the blockbuster franchises it’s acquired over the years as well as tapping consumer nostalgia with remakes of classic Disney movies to break the $10 billion mark.

Which is all fine and dandy. But next year, Disney won’t have that same crutch to lean on.

It won’t be long before they flog Luke Skywalker’s corpse for every dime it’s got in some pre-reboot-sequel-athon. But, for now, all of Disney’s major franchises have wrapped.

With the exception of a few franchise spinoffs, the 2020 slate will be mostly new titles or remakes of less bankable classics, which makes replicating this year’s performance all but impossible.

Or maybe I’m wrong and the West Side Story remake will be the new Avengers: Endgame. 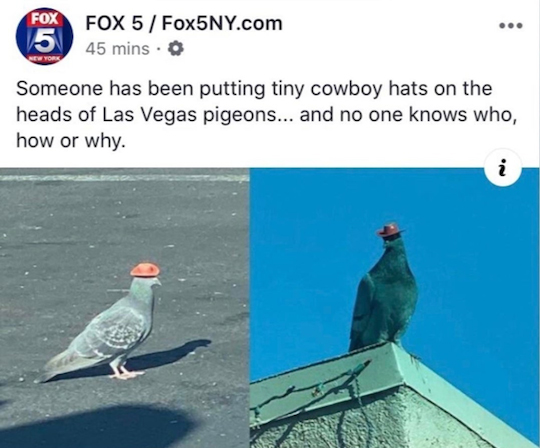 In the wake of the stock market crash of 1987, President Reagan created a special task force to advise and guide the president on potential financial calamities.

The old jelly bean lover charged the team with “enhancing the integrity, efficiency, orderliness, and competitiveness of our Nation’s financial markets and maintaining investor confidence.”

Not much is known about the inner workings of the group, since the minutes of their meetings are not made public. But it’s an open secret that they typically meet in times of financial crisis and have met as recently as Christmas Eve 2018.

Now, this group is supposedly formed to exist in a purely advisory capacity.

Legally, they can’t intervene with the markets. But over the years, some economists have seen “dark matter” in the markets which can be attributed to this group.

These are massive movements of money that can only be explained by major market manipulation (or money ghosts).

Obviously, I’m not an economist (though I have drank many an economist under the table if that counts for anything). So I asked the editor of Money & Crisis and our in-house macroeconomic expert to swing by the OLT office and lay it bare for us.

Well, Shane. Technically, the Federal Reserve (or “the Fed”) is not supposed to buy stocks or stock futures. And they certainly do not include those assets on their balance sheet listings, which are published every week.

However, we know from Fed meeting minutes that the Fed does indeed own positions in the markets that it does not publish.

Case in point: Back in October 2012, then-Fed Governor Jerome Powell (now-Fed Chair), explained what happens when the Fed decides to sell its investment positions during a discussion:

“So when it is time for us to sell, or even to stop buying, the response could be quite strong; there is every reason to expect a strong response. So there are a couple of ways to look at it. It is about $1.2 trillion in sales; you take 60 months, you get about $20 billion a month. That is a very doable thing, it sounds like, in a market where the norm by the middle of next year is $80 billion a month. Another way to look at it, though, is that it’s not so much the sale, the duration; it’s also unloading our short volatility position.” [Emphasis my own.]

Here, Powell is stating that the Fed has a “short volatility” position ― meaning the Fed is either shorting the Volatility Index (VIX) via futures, or options.

Clearly, the Fed has positions that are not listed on its balance sheet… which means it buys and sells securities that are not publicly stated.

I can also attest that the Fed directly intervenes in the stock market on a regular basis.

Whether it’s a direct intervention or done via a proxy, I don’t know. But I have personally watched the market react in ways that indicate a clear intervention by the Fed.

But now let’s get to the best part: How do we profit from this?

The Single Best Trading Strategy of My Career

I’ve developed a REAL TIME trading strategy that can identify when the Fed is about to intervene in the markets.

The kind of money you can generate if you can successfully “front run” a Fed intervention is the stuff of dreams.

Already, this system has produced gains of:

I’ll detail this trading strategy in the coming days. But for now, know this…

This is the single most incredible discovery of my career. Stay tuned.