Google Co-Founders Walk Off Into the Sunset Together

The co-founders of the Amazing-Porn-Machine-That-Also-Does-Other-Stuff, Larry Page and Sergey Brin, stepped down from active duty at Google and parent company Alphabet yesterday, signaling the end of an era in the Valley.

Page and Brin founded Google in a sweaty little garage in Menlo Park, California back in 1998. (And frankly, it’s a miracle that those boys got out of that trash hole alive.) 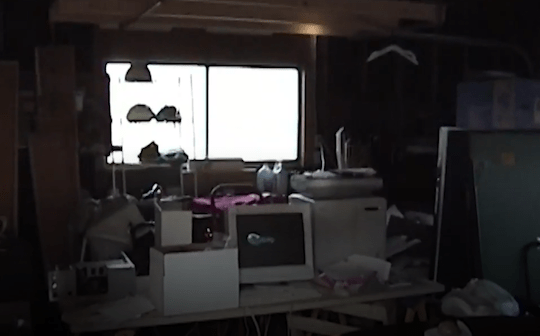 Google was either going to be a search engine or a deadly virus that wiped out all of humanity.

Since then, Google has gone on to become… well, Google — a $900 billion company that controls the internet, inserts itself into almost every aspect of our daily lives, and casually experiments with creating immortality.

Larry and Sergey were instrumental in creating the Silicon Valley chill-bro culture (characterized by ping-pong tables and sweet bean bags) which went on to become the dominant corporate model for a startup looking to make a name for itself. (Because, as we all now know, the key to becoming a $900 billion company is beanbags.)

In the past few years, however, Google’s freewheeling corporate culture has slowly been eroding under pressure from fresh blood in the exec pool.

Google, and by extension Alphabet, are leaving this decade very different than the company that hacky sacked its way into it. And Page and Brin’s exit is the bell that tolls for beanbags and transparency.

With this synchronized step down, the Super Google Bros are handing over total control of Google and its daddy company to Sundar Pichai, the current CEO of Google. (“The unkillable lump in the basement of the Googleplex is his problem now,” says Page.)

Page and Brin have been stepping back from the day-to-day running of Google and Alphabet for some time now. They rarely make public appearances these days and when Google was called upon to testify on Capitol Hill on Russian interference in the 2016 elections, it was Pichai who stepped up to the plate.

Pichai is who’s called in Silicon Valley “a wartime CEO” (because the Valley is mostly nerds with nothing better to do).

Page and Brin were the visionaries who built a global brand out of a Menlo Park biohazard. But in order to stay on the top, compete with a ruthless monster like Amazon, and fend off a government crackdown on big tech, they need someone like Pichai.

Well, it ain’t beanbags, I can tell you that much. Since Pichai took over as CEO of Google in 2015, the work culture has undergone a Marie Kondo-esque transformation. If something doesn’t bring Sundar Pichai joy, it’s gone.

Since the beginning, Google has cultivated a philosophy of 100% transparency with its employees. But under Pichai, the search giant has stopped its famous TGIF meeting where Google employees could speak frankly and grill execs on any topic (like “should we be making tech for the military” and “do billionaires poop?”).

The company has also banned “political speech” (does Bernie Sanders poop?), hired a union-busting law firm (poop on your own time), fired four prominent activist employees (you don’t poop here anymore), and a bunch of other not-very-beanbag stuff.

The message is clear: “You work for us, not the other way around. (Also why is everyone talking about poop today.)”

As majority shareholders, Page and Brin will still be sitting in on the twice-weekly Google board meeting. In a letter to whoever wants to read it I guess, the pair said they’ll be there to offer friendly advice to Pichai but will stop “nagging” him about all the beanbag stuff.

“While it has been a tremendous privilege to be deeply involved in the day-to-day management of the company for so long, we believe it’s time to assume the role of proud parents,” Page and Brin wrote in a letter. “We plan to continue talking with Sundar regularly, especially on topics we’re passionate about.”

Shares of Alphabet (GOOG) are up about 24% this year, trailing behind the rest of the technology market. The stock jumped 2% when the markets opened this morning as investors breathed a sigh of relief that those beanbag loving weirdos were finally out of the building.

What do you think? Is Google just doing what it can to survive in an increasingly competitive market or is it shooting itself in the foot by abandoning the culture and ideals that got it to the top in the first place?

Click here to shoot me an email and we’ll have it out in the Reader Comments section.

Sony Music Entertainment has inked a deal to be the sole seller of Beatles t-shirts, merchandise, and whatever novelty crapola it can come up with for North America.

You may have noticed that, despite being the most recognizable group of idiots from Liverpool on the planet, you don’t see that much Beatles merch on the shelves in stores.

That’s because selling John Lennon Halloween masks and Ringo Starr’s Baby Formula has been a relatively low margin game in the past.

The band itself takes such a large percentage of the profits, it’s hardly worth the trouble of making and selling your Sgt. Pepper’s Lonely Hearts Club Carbon Monoxide Detectors. (“We hope you enjoy the loud beeping that alerts you to the presence of carbon monoxide.”) 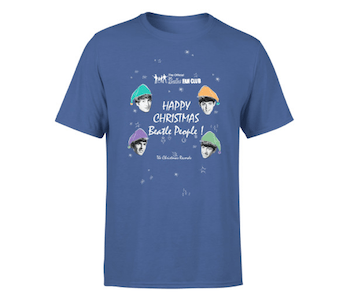 The “Beatle People” were a subterranean race of humanoids who lived beneath NYC for much of the 20th century. They also celebrated Christmas.

As part of this deal however, the Beatles’ corporate entity, Apple Corp. Limited, says it will work with Sony to expand the Beatles brand (and presumably make sure everybody gets paid in the process).

Merch used to make up a fairly small slice of the music industry’s pie. But as physical sales of music declines, the music industry has shifted focus to selling Bob Dylan branded soufflé dishes and Kanye West socks.

Target, Forever 21, FYE, and Hot Topic are all slated to start stocking Sony’s new line of Beatles merch. But if you absolutely must have a George Harrison baby grow this holiday season, Sony is already selling merch on its online Thread Store.

Tesla CEO and man with perfectly foot-shaped mouth hole Elon Musk is defending himself in court this week for calling a British cave explorer “pedo guy” on Twitter.

The insult in question (which, I would like to take a moment to restate, was “pedo guy”) occurred during last year’s rescue of a youth soccer team trapped in a Thailand cave.

If you recall, the billionaire anime lover inserted himself into the rescue operation by offering to build a cool cave submarine to rescue the kids.

Which was a gee-whiz mighty cool beans idea, Mr. Musk. But it takes a little longer to design and build a submarine than you should probably leave children in a flooded cave.

In the end, the sub was never built and the kids were rescued by a team of divers, including British cave diver Vern Unsworth. Which should have been the end of the story.

However, after the conclusion of the rescue operation, Unsworth told CNN in an interview that Musk’s involvement was a publicity stunt and he should “stick his submarine where it hurts.”

Never one to lose his cool, the Tesla CEO responded to Unsworth on Twitter with the poise and grace expected from a CEO of a $53 billion company.

He called him “pedo guy.”

Musk apologized for the insult but maintains that he never actually implied Unsworth is an actual pedophile. “Pedo guy,” according to the 47-year-old man, is just the cool thing that everybody is saying these days.

“I did not intend to convey any facts or imply that Mr. Unsworth had engaged in acts of pedophilia,” Musk said in a court filing. “Pedo guy was a common insult used in South Africa when I was growing up. It is synonymous with ‘creepy old man’ and is used to insult a person’s appearance and demeanor, not accuse a person of pedophilia.”

“‘Pedo guy’ is used in other countries also. It’s quite common in the English-speaking world. I’m quite confident if you do a search, it will just say ‘creepy old dude.’” 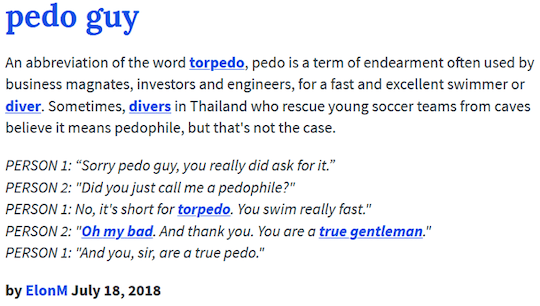 The top result for “pedo guy” in the Urban Dictionary, authored by a certain “ElonM.”

Musk’s defense (that “pedo guy” is just a fun thing to say) is undercut sli-i-i-i-ightly by a bunch of other dumb things he did:

“It cost us a fortune to gun down your unarmed son in the street. Money please.”

Yesterday, a few choice words by the president sent the stock markets plunging.

You can read the full story here. But the not so subtle point I’m getting at is what the president says matters to the markets. (A whole bunch.)

Every comment, tweet, and dope burn is scrutinized by investors and analysts, potentially driving billions of dollars of growth or shrinkage on a daily basis. And nowhere is that more obvious than on Twitter.

Twitter is a relatively new phenomenon (in the grand scheme of the history of the country at least) and analysts and bankers are still unsure how to react to this new, always-plugged-in era of interaction with the president.

Back in the old days, you saw the president twice a year and maybe once on television if we started a war. Now we get see the raw, unfiltered thoughts of a president, bored at 2 am.

The effect is so noticeable compared to past administrations, JPMorgan has created a specific index to track the effect.

JPMorgan’s Volfefe Index — a portmanteau of volatility and covfefe — tracks the effects of the president’s tweets on the stock market.

According to JPMorgan’s analysts, tweets including the words “China,” “billion,” “products,” “democrats,” and “great” have the biggest impact on the market.

“Trade and monetary policy have become an increasing focus for the executive branch, and everything from casual sentiments to seemingly formal policy intentions have been disseminated, globally and instantaneously, via this carefully scrutinized social media platform,” the analysts wrote.

“In response, a broad swath of assets from single-name stocks to macro products have found their price dynamics increasingly beholden to a handful of tweets from the commander in chief.”

Last week, we reported on an interview with Papa John’s founder John Schnatter, where he said a “day of reckoning” is coming for his former company. Reader Luke D. says Papa John may not be “the most grounded human being” but he’s right about the pizza:

Before he left the company, I ate PJ’s pizza around once every six weeks. The company constantly had discounts and promotions running to keep customers (like me) coming back, and it worked, along with the good pizza options (pro tip: you have to customize everything–take the stock pizza and you’re doomed to just okay pizza). They periodically introduced new pizza options and ideas (new to them, anyway).

And then Schnatter was canned. No discounts, no promotions, no emails or texts (even after re-upping), no new options in 2019. They have removed some of the PJ’s oddball options that were more interesting. In short, they are becoming quite generic. And things they advertise as “new”, like the stupid sandwiches, were around at least for the last year of Schnatter’s time in office.

PJ’s was never my brand, so I’m going to have to take your word for it Puffy P. It’s possible the new management is cutting corners to drive growth in the wake of Schnatter’s absence.

I knew it. It was old man Schnatter all along. And he would have gotten away with it too if it wasn’t for meddling me.