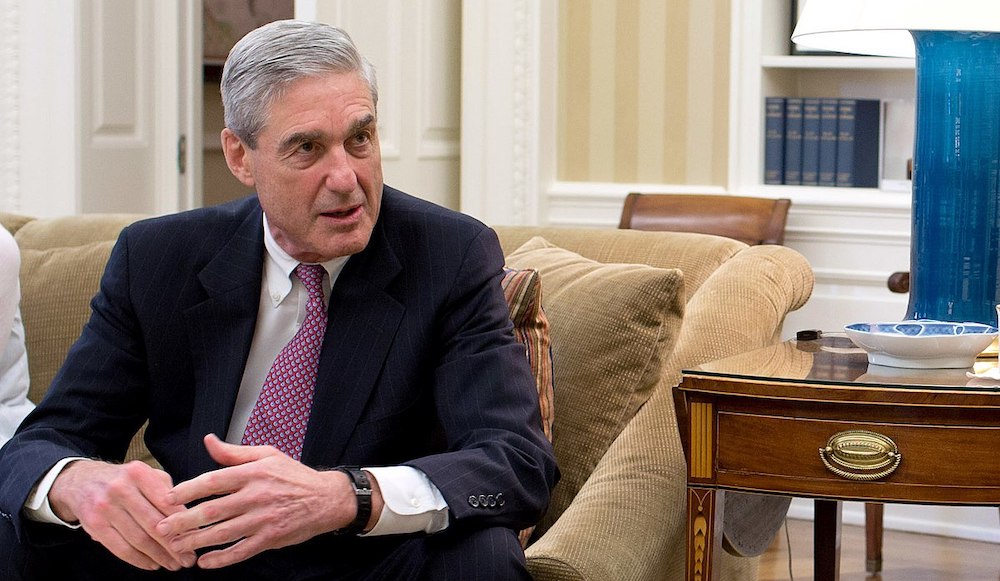 Roll up, roll up, to Robert Mueller’s Flying Circus of “Could You Repeat the Question” and “I Would Refer You to the Report.”

Special Counsel Robert Mueller was dragged kicking and screaming before Congress this morning to testify for five hours about his much-talked-about report.

And by “testify,” I mean look confused, ask lawmakers to repeat themselves, and do his darndest to never actually answer a single question.

The Dems have been salivating at the thought of getting Mueller to testify about the report on live television for the last two years. But both parties had something to gain today.

They believe the only reason that the American people don’t support “doing the I-word” right now is simply that they haven’t read the report. (Because reading sucks! Am I right, dudes? *Plays invisible electric guitar*)

But everyone loves television, right?

The Dems went into today’s hearing with the express purpose of goading Mueller into restating some of the more salacious accusations in the report and bang out some juicy soundbites to run on the evening news.

For the Republicans, however, this was a key opportunity to attack Mueller’s credibility, discredit the investigation, and accuse the Special Counsel of shifting the burden of proof to the accused (Donald Trump. You might have heard of him).

We love a good circus here at One Last Thing (I have it on good authority from one of our disgruntled readers that we are “a bunch of clowns”). So we’re putting the HQ on lockdown, we’ve ordered in the bagels and the coffee, and we’re going to watch the entire testimony so you don’t have to. (Nobody should have to.)

(Ed note: As always, One Last Thing is a party-free party. We just report the news as it happens. Dem. Republican. Guy who votes for Bart Simpson in every election. Y’all are welcome here. Click here to email us your thoughts on today’s hearings.)

Expecting Robert Mueller to dish some juicy drama for the cameras is like expecting President Trump to not trash Mueller on Twitter all day today. (Oh, you know he is. The Trump Tweets are collected below in One Last Tweet.)

Mueller has made it clear from the beginning that he is a reluctant witness and said if he testified he would not say anything that is not in the report itself.

But nobody could have predicted just. How. Boring. His. Testimony. Would. Be. (Just be glad we jumped on this grenade for you, folks.)

In the first two hours of his testimony, old Bobby boy gave 41 monosyllabic answers. While every other answer could be boiled down to one of four stock answers. 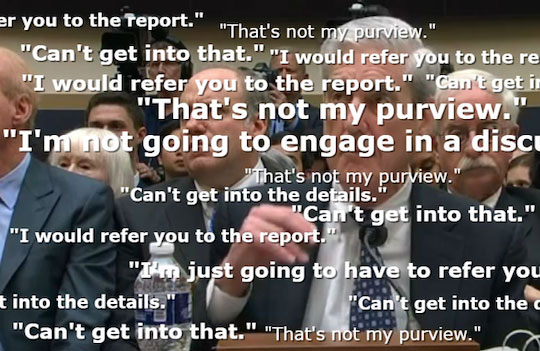 Dems tried to get their soundbites by leading Mueller to simply restate statements he already made in his report. But he would only deflect the questions and tell them to read his report. (Like your friend from college who keeps telling you to read their book about sexy vampires but come on its 400 pages long, Jessica!)

This lead to repeated instances of frustratingly circular conversations like this exchange between Mueller and Democratic Ted Deutch, discussing a phone call in which President Trump asked Don McGahn to remove Mueller from his position.

Deutch: “Director Mueller, did McGahn understand what the president was ordering him to do?”

Mueller: “I direct you to what we wrote in the report in terms of characterizing his feelings.”

Mueller: “I direct you again to the report.”

Deutch: “In fact that day he went to the White House and according to your report he drove to the office to pack his belongings and submit his resignation letter, close quote.”

Mueller: “That’s directly from the report.”

Even aside from his reluctance to answer any and all questions, Mueller put on a weak performance at today’s hearings.

The former special counsel appeared frequently confused, was constantly asking lawmakers to repeat their questions, and seemed to be unfamiliar with, or unwilling to recall, sections of the 400-page report.

Meanwhile, Republicans were on the attack right out of the gate. But where Mueller’s silence seemed to undermine the Democrat’s questions, it only lent credence to the conservatives’ accusations.

Update: Mueller seemed more confident in today’s second hearing in front of the Senate Intelligence Committee. Perhaps he had shaken off the live TV nerves or simply felt more at home because of his intelligence background.

The Inverted Burden of Proof

In the first 10 minutes of the hearings, Mueller doubled down on his assertion that his report did not exonerate President Trump after being pressed on the matter by Chairman Jerrold Nadler. (Known to his friends as “Jerry Nads.”)

Mueller: “The finding indicates that the president was not exculpated for the acts that he allegedly committed.”

Nadler: “The president has repeatedly claimed that your report found there was no obstruction, and that it completely and totally exonerated him. But that is not what your report said, is it?”

Dems everywhere pumped their fists for what was sure to be the raddest congressional hearing anyone had ever seen. But this statement would only end up forming the foundation one of the Republican’s strongest arguments today.

Texas Rep. John Ratcliffe criticized Mueller’s decision as a prosecutor to offer his opinion in the report that the president had not been exonerated. Ratcliffe said that Mueller had “inverted [the] burden of proof” on the accused and violated the principles of the Department of Justice.

Ratcliffe: “Which DOJ policy or principal sets forth a legal standard that an investigated person is not exonerated if their innocence from criminal conduct is not conclusively determined?

“Can you give me an example other than Donald Trump, where the Justice Department determined that an investigated person was not exonerated?”

Mueller: “I cannot. But this is a unique situation.”

Ratcliffe: “You can’t find it because — I’ll tell you why — it doesn’t exist”.

Mueller: “Respectfully, director, it was not the special counsel’s job to conclusively determine Donald Trump’s innocence or to exonerate him because the bedrock principle of our justice system is presumption of innocence. It exists for everyone.

According to Turner, “exoneration” has no legal meaning in this context and is not within the power of his office. 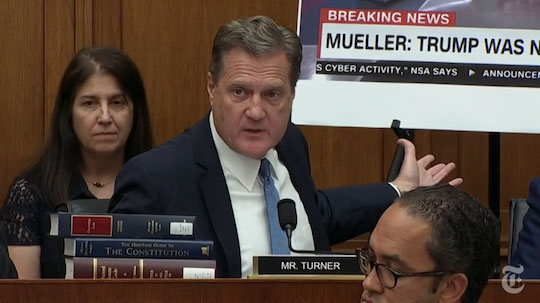 Turner did this neat trick where he pulled up the current headlines about the hearing to prove his point. (Also, don’t just pretend like you’re just casually reading THE CONSTITUTION, Mike.)

On multiple occasions throughout the Judiciary Committee hearing, Mueller referenced Justice Department Office of Legal Counsel (OLC) opinion that a sitting president cannot be indicted. (Because he’s got stuff to do.)

However, when questioned by Colorado Republican Ken Buck, the Special Counsel said those protections would not extend to when the president leaves office.

Mr. Buck: “You believe you could charge the president of the United States with obstruction of justice after he left office?”

Mr. Mueller: “I’m not sure because I haven’t looked at the ethics standards but the OLC opinion says that the prosecutor, while he cannot bring a charge against a sitting president, nonetheless he can continue the investigation to see if there are other persons drawn into the conspiracy.”

Update: At the beginning of the second hearing, Mueller clarified that he does not agree with the assertion that he didn’t prosecute Trump because of the OLC opinion. And a thousand headlines cried out in pain… and vanished.

In front of the House Intelligence Committee, Mueller confirmed his investigation discovered a social media campaign developed by the Russians to influence the election.

Democrat representative Jim Himes pressed Mueller to say unequivocally who the campaign was meant to help.

Mueller: “Donald Trump. Donald Trump. But there were instances where Hillary Clinton was subject to much the same behavior.”

Later, in the closest thing to an opinion we saw from the former Special Counsel today, Mueller said that lawmakers need to move swiftly to address Russia’s interference in the democratic process.

Mueller: “The indictments we returned against the Russians — two different ones — were substantial in their scope, using the scope word again. And I think we have underplayed to a certain extent that aspect of our investigation that has and would have long term damage to the United States that we need to move quickly to address.”

“They’re doing it as we sit here. And they expect to do it during the next campaign.”

Stray Observations From a Long Day

The president was remarkably restrained in his tweeting today (likely under the advisement of his aides), leaning on retweeting the opinions of others rather than weighing in himself.

But there were a couple of Trump originals peppered in with the retweets (just try and keep him away from Twitter) and here they are:

It’s back to business as usual tomorrow.

Until then… I refer you to the report.