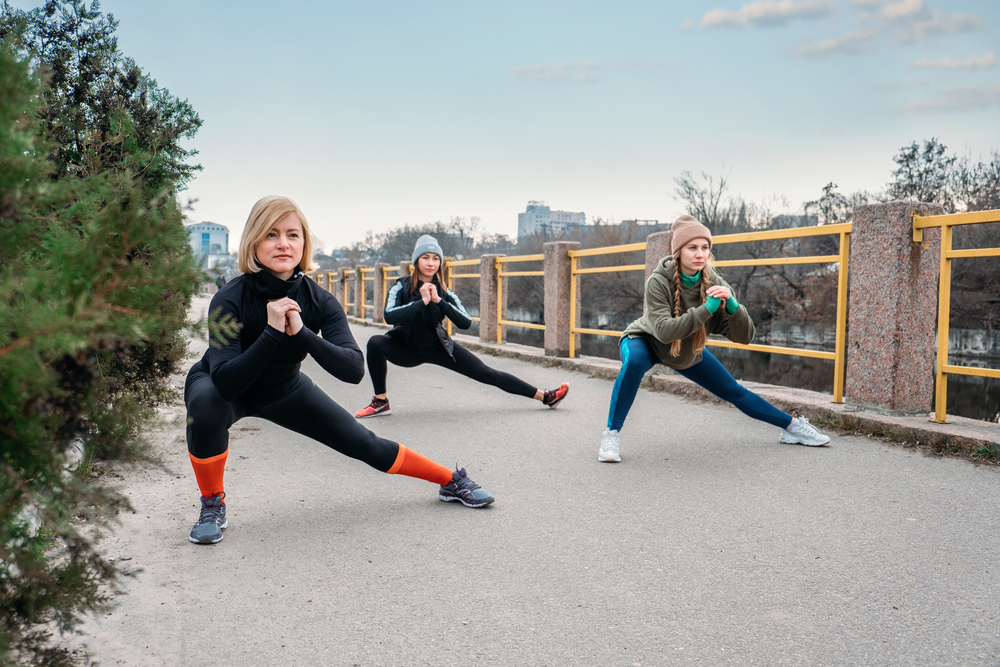 Mommy and Daddy's Palace of Pain

The fitness industry has taken a severe hit, as COVID-19 prevents Americans from signing up for gym memberships to impress their friends (but never actually going).

Before 2020 pissed the bed in the most spectacular fashion, there were more than 62.4 million members of health clubs in the US. Only 18% of those folks actually went to the gym, but the 2020 economy is primarily folks who signed up for stuff and forgot about it.

Since March, the industry has shriveled up faster than a bull’s testicles at a rocky-mountain-oyster all-you-can-eat buffet. ClassPass, an online portal that connects studios to folks who will pay good money to never actually go to those studios, told CNBC that 95% of its revenue dried up in April.

At the nadir of the lockdowns, popular fitness chains Gold’s Gyms and 24 Hour Fitness declared bankruptcy. While countless pilates studios, cycling gyms, and yoga holes have either laid off all their staff or shuttered their doors permanently.

“I’ve barely slept over the past four months,” Jacob Gise, owner of a Body Fit Training franchise in Santa Monica, told CNBC. “I’m worried about paying my staff, I’m worried about trying to get this rent money and also just trying to take care of everybody,”

In the early days of the great Bed-Pissening, gym owners turned to Zoom and other live video platforms to try and blast some abs through the power of the internet. As it turns out, it’s harder to bully people to work out when they’re in the safety of their own home, 60 miles away.

“There’s not as much camaraderie over Zoom as there is in person,” Lauren Owen, a fitness instructor in Michigan, told CNBC.

In recent weeks, the industry has made a hard pivot towards outdoor classes, where the virus is less likely to spread among class attendees (and you can charge more than a crappy Zoom class).

In parking lots, rooftops, and secluded woodland murder hotspots all across the nation, folks are lifting stuff, stretching things, and rubbing their sculpted bodies in normal folks’ faces. 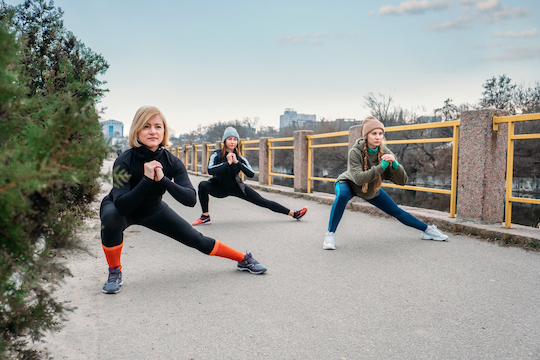 The yoga ladies are returning. Nature is healing.

The problem with outdoor classes is you don’t catch those 82% of folks who sign up for a gym membership and never actually go. But it may tide over the industry until we stop the planet from pissing itself.

According to the COVID-19 Industry Impact Report released by the Sports and Fitness Industry Association, “The importance of a vaccine for reopening gyms has greatly increased, and 91 percent of respondents believe a mask requirement is most important to reopening. Regardless, gyms are expected to open before the return of youth sports.”

There’s one part of the fitness industry that seems to be doing just fine however. More on that, below.

Welcome to Mommy and Daddy’s Palace of Pain

What happens when America’s hard bodies can’t pay tribute to the swole gods at the Church of Iron?

Are we expected to believe that US biceps are simply going unblasted just because of a little pandemic?

Could it be that the nation’s massive glutes are shrinking into tiny babies’ bottoms from disuse? Might we be looking at an imminent crisis of undevastated delts and reedy quads?

Maybe not. According to a new report from eBay, Americans trapped indoors bought an unreasonable amount of fitness equipment between March and April this year. Online sales increased as much as 20 times in some categories, as America’s living room was converted into mommy and daddy’s palace of pain.

“Comparing March and April sales in 2019 for dumbbells with sales during the same period in 2020 we can see an increase of 1980% according to eBay sales data; meanwhile weight plate sales have increased by 1355% in the same period too.”

It’s not just online sales that seem to be affected either. I spoke with local man-on-the-street and guy-I-work-with Mike Saul, who says he couldn’t find a single exercise bike in a 250-mile radius of him.

“With the gyms closed my wife wanted to buy me an affordable exercise bike or other small stationary device for Father’s Day,” says Mike.

“Good luck! All Dicks sporting goods in a 250-mile radius of me had NOTHING, even the non-affordable stuff. They are starting to sell their floor models but otherwise you’re out of luck most places.”

We can already see how this is playing out in the markets. Take a look at Peloton’s stock. Before the pandemic hit, the overpriced fitness-cycle company was floundering like me on a fitness bike.

Since the start of the Great Insidening, however, the company’s stock has blasted off and is currently up 132% year-to-date.

Whether or not anyone is actually using this thing is another story completely. As Mike points out, “the human race is notoriously lazy and winds up using the equipment as coat racks.”

Who knows? Maybe when the pandemic is over, American’s will emerge from their fitness caves a nation be-huged.

The price of bitcoin surged passed $11,000 last night, as I slumbered in my bed dreaming of a world without the 24-hour news cycle.

The crypto favored by perpetually stoned nephews the world over has risen 20% this week, topping out at $11,380. After investors pared off their gains, bitcoin settled back down to $10,910, at time of writing, representing a 14% gain since this day last week.

Critics of my nephew Derek’s “investment portfolio” are skeptical bitcoin can keep this up, given the current environment of “nobody has any idea what’s going on.” But Wall Street analyst and foaming-at-the-mouth bitcoin fan boy, Max Keiser, believes this bull run has its sights set on $30,000.

“$28,000 is in play before we see a pullback – and then we’re heading to 6-figures,” said Keiser while googling “where legal to marry bitcoin.”

Keiser analysis included a swipe at gold bug Peter Schiff, who has dismissed bitcoin as having “no market value.”

“Somewhere, @PeterSchiff is puking his brains out right now,” tweeted the grown man.

The Fed is Now Cornered

The Fed now has a major problem on its hands…

The fact that gold is ripping higher.

Americans see gold as a measure of inflation. Food prices, car prices, home prices, stock prices, practically the price of anything can rise and the average American won’t think “inflation.”

It’s a different story with gold.

Once gold starts ripping higher to the point that the average American notices it… then everyone and their mother starts talking about inflation getting out of control.

We are at that point now. Gold is going absolutely vertical. And it has just hit new all-time highs, rising almost $500 from its March lows. 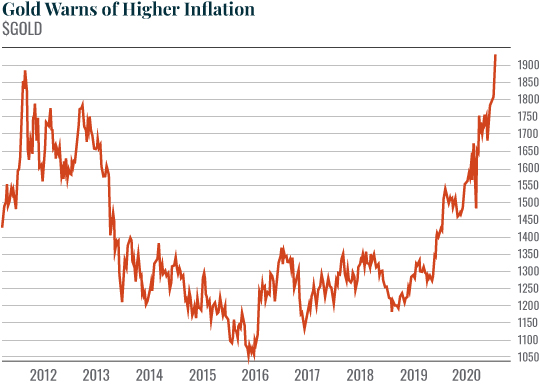 This is a signal that the market is “smelling” higher inflation. And because gold is now grabbing headlines, the average American is waking up to this fact.

So… what does all this mean?

The Potential for an Inflationary Spiral

The Fed will now either be forced to confront inflation (hike rates or tighten policy) OR it will begin to lose control.

Confronting inflation, by tightening monetary policy, would mean kicking the already weak economy just as it’s getting back on its feet. This is a guaranteed “depression” trigger and stock market crash.

On the flip side, ignoring gold’s move higher means letting inflation get out of control.

Can the Fed afford to let the inflation genie out of the bottle? The last time it did this was in the 1970s, and it didn’t stop until the Fed had raised interest rates to 19%.

This is a literal “no win” situation for the Fed. One choice leads to a depression/crash.

The other leads to stagflation at best – a situation in which inflation is high, economic growth slows, and unemployment remains steadily high. Otherwise known as recession-inflation.

And our money is on stagflation.

I believe the Fed would rather risk letting inflation get out of control than triggering a depression. The Fed has always adopted a “kick the can” mentality when it comes to major problems.

Inflation will prove no different. Which is why we believe inflation will continue to spiral out of control in the coming months.