The decision to start official impeachment proceedings follows a report that President Trump withheld aid from Ukraine in exchange for dirt on political rival Joe Biden.

This morning, the whistle-blower’s official complaint that kickstarted the impeachment debate was declassified and released.

The nine-page complaint accuses Trump of using his presidential power to try to get Ukraine to interfere in the 2020 election to benefit him, and it claims the White House tried to cover it up.

[At the time of writing, House Speaker Nancy Pelosi also accused the White House of a cover-up.]

According to the complaint, senior White House officials were “deeply disturbed” by the conversation between President Trump and Ukraine President Volodymyr Zelensky.

“They told me that there was already a discussion ongoing with White House lawyers about how to treat the call because of the likelihood, in the officials’ retelling, that they had witnessed the President abuse his office for personal gain,” the whistle-blower whistle-wrote in the complaint.

In the days following the phone call, multiple White House officials intervened to “lock down” all records of the call, including the word-for-word transcript.

The DOJ’s Criminal Division has already investigated the transcript and concluded that Trump did not violate campaign finance laws. They also ruled that the Trump admin did not break any laws by failing to quickly share the whistle-blower’s complaint with Congress.

That said, 219 House Democrats and one independent ― a majority of the House’s 435 members ― currently favor some kind of impeachment action against Trump.

President Trump continues to dismiss the allegations that he acted improperly (and in all caps, too).

And several Republican lawmakers that align with Trump have publicly asserted that the complaints are underwhelming, even “laughable”, and are being used by Democrats as a political tool.

The FTC sued the owner of Match.com, Match Group Inc., saying it had used fake advertisements to dupe hundreds of thousands of consumers into buying subscriptions.

For some context, it’s free to create a profile on the online dating site, but in order to respond to messages you need a paid subscription.

The FTC’s lawsuit contends that Match.com notified free users of messages even after the company detected that the account sending the message was fraudulent. The ads encouraged users to upgrade to a paid subscription to reveal the identity of the admirer sending the message. And when people paid up, the message would disappear (because love is a scam).

If at that point users complained to Match.com or tried to get their money back, Match.com would deny wrongdoing.

According to the complaint, Match.com gained 499,691 new subscriptions from June 2016-May 2018, all linked to fraudulent communications.

“We believe that Match.com conned people into paying for subscriptions via messages the company knew were from scammers,” Andrew Smith, the director of the FTC’S Bureau of Consumer Protection, said in a statement.

Additionally, the FTC claims that Match.com made canceling subscriptions overly difficult, locked people out of their accounts if they disputed charges, and made false promises.

As one example, the FTC alleged that Match.com lured new subscribers by promising a free six-month subscription if they didn’t “meet someone special,” but the company didn’t adequately disclose that users must message five Match.com subscribers a month, among other requirements.

In response, Match Group has called the claims “outrageous” and that the FTC is mischaracterizing the interactions as fraudulent or romance scams. The company plans to challenge the claims in court. 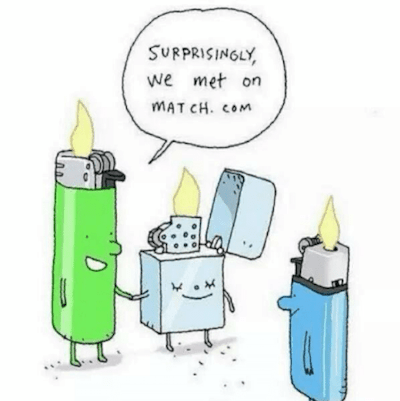 This Is Your Brain on Stock Market

Hint: It’s not Pretty and It Cries A Lot

For the past two days, we’ve been discussing James Altucher’s unfair advantage in the markets.

That advantage? Removing the human emotion from the process by writing his own trading software.

This has been huge talk around our Baltimore offices this week, and for good reason.

In fact, we’ve asked James to write a special edition of One Last Thing tomorrow to tell us more about how his new software works.

In the meantime, I want to highlight something James told me that I think every investor on the market can relate to…

Here’s what James had to say:

I was scared and I needed to make a lot of money.

This is what happened. It was a beautiful day. No clouds. A deep blue morning. The best day. The stock market looked like it was going to open higher.

I ate breakfast at the Dean & Deluca on the bottom floor of the World Trade Center. My business partner, Dan, and I ate there every morning and then walked a few blocks to my place and would day trade the markets.

He looked up while we were walking back and said, “Is the President coming into town? Is that Air Force Once?”

And then we watched – microsecond by microsecond – as the plane, at 600 miles per hour, went a few hundred feet over our heads and a loud BOOM and everyone ducked because that’s what felt right and the plane went SMACK into the World Trade Center.

I don’t know how much the market went down the week after it opened. It was surgery on my skull.

I was so scared. I was losing everything. My daughter saw me crying.

Like many people, I behaved irrationally that week. I was so afraid to go broke, so the market broke me mentally.

The truth is, I didn’t have a clue what I was doing. And at the end of that week I swore I would never trade again.

But I wanted to get rich. And I had an idea.

I loaded in 45 years of stock market data. Every price movement on every stock. 8,000 stocks. Every tick up or down.

I did what I always do when I needed to solve a problem. I had been a software programmer for 15 years. I had built and sold a successful software company.

So I wrote some software.

I know, I know. No one likes a cliffhanger. But James can discuss the intricate details about his software best – and he’s doing just that in the pages of One Last Thing tomorrow. Stay tuned.