Previously, LaCroix (who flavors its trendy seltzers with the dying whispers of fruit) posted five straight years of growth. But sales of the wispy beverage have taken a hit in 2019 from a highly publicized lawsuit and trade war tariffs.

Law firm Beaumont Costales filed a class-action lawsuit against the beverage company, claiming it uses artificial ingredients to flavor its drinks. (Which is crazy. Because everyone knows LaCroix flavors its drinks with all-natural Smurf sneezes.)

The lawsuit contends that LaCroix flavors its drinks with an ingredient found in insecticide. And while that may be true, as scientific experts have pointed out, that doesn’t mean it’s dangerous or even “not natural.”

As the Wall Street Journal reported a-a-a-all the way back in 2017, LaCroix’s mysterious flavoring “is actually a clear, concentrated natural chemical that’s been used for decades in products as varied as gravy, ice pops, coffee, shampoo, and even insecticide.” (Mmmm insecticide.)

And the ingredient is already FDA certified as a “natural ingredient.” So, Beaumont Costales and their clients don’t have much of a case.

The best thing LaCroix can do right now is stay calm and be totally transparent. (Cue publicity meltdown screaming FAKE NEWS and injustice.)

LaCroix took to social media to blame the drop in quarterly sales on “buzzworthy publicity” and creepily refer to their precious little seltzers as “pure” and “innocent.” 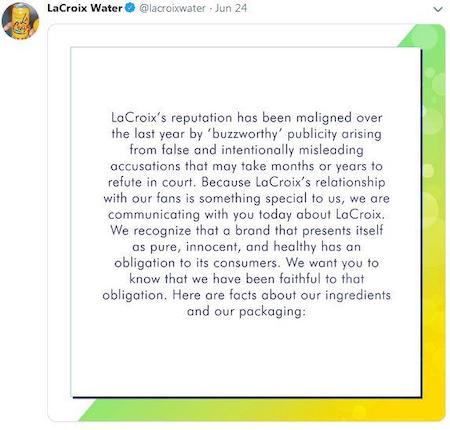 This is just one page from LaCroix’s serial killer manifesto.

After the sales drop in the last quarter, National Beverage Corp CEO and general ding dong Nick Caporella blamed the numbers on a grave “injustice.”

“We are truly sorry for these results stated above. Negligence nor mismanagement nor woeful acts of God were not the reasons — much of this was the result of injustice!” wrote Caporella.

“Brands do not see or hear, so they are at the mercy of their owners or care providers who must preserve the dignity and special character that the brand exemplifies.” (Won’t someone please think of the brands!?)

All About Dem Debates (PART ONE)

Last night marked the first of the debates in the Democratic primary, which will be broken in two parts because the number of Dems campaigning for president is TOO DAMN HIGH.

Only one of the five top-polling candidates, Senator Elizabeth Warren, was sorted into this event, giving the scrappy underdogs a chance to be seen.

There’s a lot to get through and a fresh batch of donkeybrains tonight, so let’s get to the best bits.

Beto O’Rourke entered the race with the momentum of a strong (ultimately unsuccessful) grassroots campaign for the Senate.

Unfortunately, his campaign has largely failed to capitalize off that energy. And last night, the nation watched as the last reserves of that goodwill dried up in front of a live studio audience.

Former Housing and Urban Development Secretary and man-you-haven’t-heard-of-until-now Julián Castro took Beto to task for his unwillingness to support decriminalization of border crossing.

Beto said he favored more “comprehensive” immigration reform. But when O’Rourke offered no specific details for a plan, Castro accused him of not having done his “homework.” (Which is about as salacious a barb as you’ll find at a Dem debate.)

When asked if he would support 70% marginal tax on the country’s top earners, he ducked the question and was met with an icy response from the audience (which was leaning w-a-a-a-ay to the left last night).

Cory Booker is Surprised That Other People Know Spanish

Cory Booker, who is trying to position himself as a more centrist candidate, occupied more air time than any other candidate last night.

During the debate, Booker was more googled than any other candidate. (I hear that if you’re googled more than 1,000 times in a minute, you can feel it.) 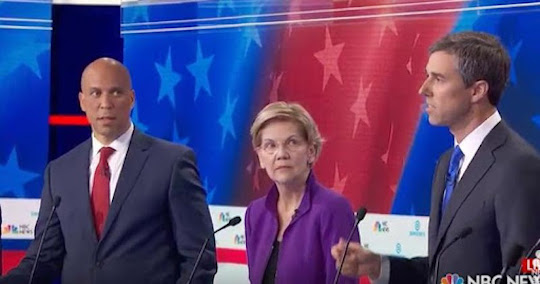 When you’re at the talent show and the kid before you has the same talent.

Castro and Booker followed up with their own bit of Spanish after that. But when everyone speaks Spanish, it kinda loses its magic.

Marianne Williamson, who will be debating on the stage tonight and you didn’t know was running for president, took a shot at the bilingual boys on Twitter:

When asked if they would support doing away with private healthcare, only senator Elizabeth Warren raised her hand. (And Mayor of New York Bill de Blasio. But he doesn’t count because no one will elect a man who murders celebrity groundhogs.)

Warren was met with thunderous applause from the live studio audience, who reacted far more positively to progressive left ideas throughout the night.

If the room was a litmus test for the election, it sounds like the Democratic voter base is leaning far more left than in 2016. But it may be the case that the folks motivated to come see the debate were activists and Dem super fans who would lean more progressive anyway.

I’d like to hear from you guys on this — both Dems and Republicans who saw the debate.

Did anything speak to you? Does anything concern you? Do you think the crowd represents you and your friends?

Click here to email me and we’ll argue about it in the comments section tomorrow.

With four of the top-polling candidates on the stage, including frontrunners Biden and Sanders, tonight’s debate is going to be the main event.

Oh, and I almost forgot the mandatory relevant Trump tweet:

Arby’s heard you weren’t having bad dreams, so they whipped you up a fresh slice of nightmare fuel in their kitchen. 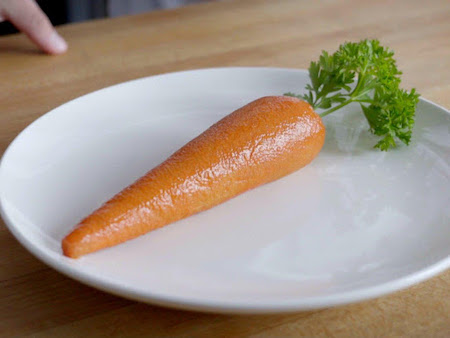 All smooth and shiny… just like a real carrot…

Conceptualized by Arby’s brand executive chef and food pervert Neville Craw, this affront to the concept of food is constructed from turkey breast meat and flavored to taste like a carrot.

According to INSIDER writer and person without taste buds Meredith Cash, it’s “shockingly reminiscent of a carrot in both taste and appearance.”

“The turkey-based pseudo-vegetable had a sweet maple taste with earthy, herb-filled undertones. The only major difference between the Marrot and a traditional carrot was the crunch of the vegetable. Instead, Arby’s megetable had a crisp, glazed coating with the tender interior of a well-prepared turkey breast.”

You’re dead to me, Meredith.

The marrot is Arby’s answer to the vegan, vegetable-based meat craze lead by companies like Impossible Foods and Beyond Meat (BYND). And what they have to say is loud and clear.

But in case you need it spelled out, Arby’s released a statement saying: “Arby’s is not one of the restaurant companies interested in working with Impossible Foods. The chances we will bring plant-based menu items to our restaurants, now or in the future, are absolutely impossible.”

Would you try the marrot? Is this better or worse than a plant-based burger?

Click here to email me your answer. And if you’ll excuse me for a moment I’m going to go take four showers.

Just another day in Baltimore City: 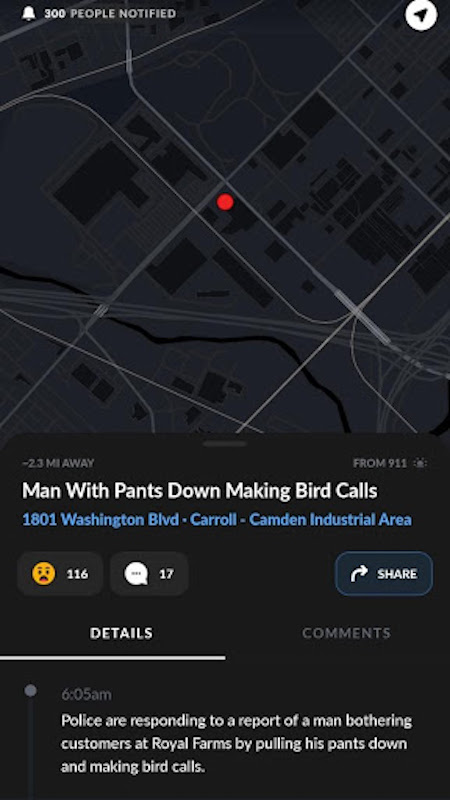 We Are Angrier Than Our Parents Ever Were

Are you feeling angry?

If you are, you’re not alone (not in a creepy I’m-in-your-house kind of way. I mean statistically).

According to a nationwide poll, we’re all a little more angry these days.

Of the more than 3,000 people surveyed, 84% said that Americans today are angrier than they were a generation ago. (Of course we’re angry. Back then we could smoke and eat as much red meat as we want. Now everything either gives you cancer or make you depressed and impotent.)

When asked to assess their own levels of chill, 42% of folks said that they were angrier in the past year than they had been in any time before that.

The seniors who were polled were less likely to feel angry, while those under 35 were the angriest demographic surveyed. (That might be skewed by the Game of Thrones finale, though.)

Regardless, the perception across the board is that Americans are angrier today than they’ve ever been before. And this clearly speaks to the widening dive between liberals and conservatives in this country.

It may seem like a small thing. But heading into an election charged with anger is a dangerous thing. All it takes is a spark to turn a divide… into a conflict.

I hope cooler heads will prevail. But as we head into election season, we all need to be a little more aware of how angry everybody, including ourselves, is.