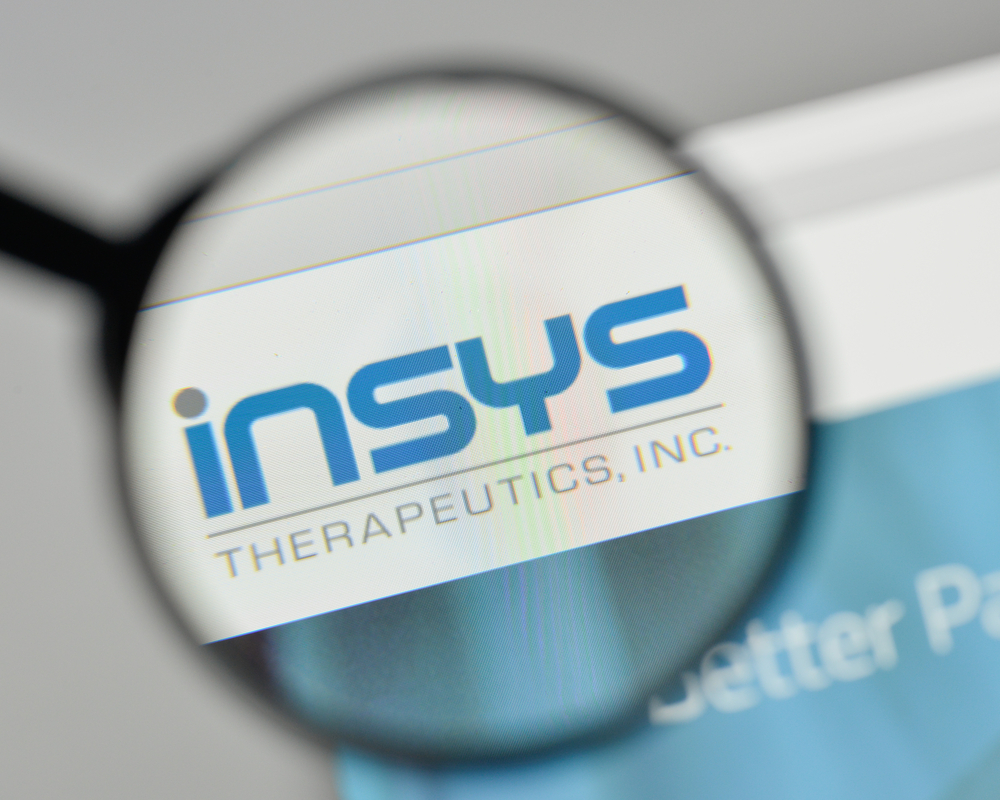 A Tale of Bribery, Racketeering, and 28,000 Deaths

Fentanyl-peddler Insys Therapeutics (INSY) filed for Chapter 11 bankruptcy just days after agreeing to pay the Department of Justice $225 million for its part in the ongoing opioid crisis. (I guess the DOJ will have to put off buying that handbag it really wanted.)

The bankruptcy filing comes on the heels of a guilty plea, in which Insys admitted to five counts of fraud and bribing doctors to prescribe their dangerous opioid Subsys. (As well of two counts of being two-dimensional white-collar villains from a bad student film.)

Subsys is an oral spray developed for cancer patients that contains fentanyl — an opioid 100 times stronger than morphine. Just 3 milligrams of fentanyl can cause an overdose, compared to 30 milligrams of heroin. In 2017 alone, more than 28,000 U.S. citizens died of fentanyl overdoses.

For their part in the scheme, a federal jury in Boston found Insys founder John Kapoor and four former Insys execs guilty of racketeering (which sounds a lot better than “killing a whole bunch of people for money”).

Between 2012 and 2015, while Kapoor was chairman, Insys used fake “speaker programs” to bribe doctors to prescribe Subsys to patients in dangerously high doses, even if they didn’t need it.

The company also neglected to tell insurance companies just how dangerous the drug was, so they would cover the $10,000/month cost of a Fentanyl prescription. (Thank God I have health insurance so I can afford my $120,000/year death sentence. The system works!)

In a statement, Insys CEO Andrew G. Long said the company was running out of money fast and needed to file for chapter 11 to sell its assets and cover its costs.

Sales of opioids, which make up about 90% of the company’s total sales, have declined substantially in the last year (I wonder why). And according to the SEC, Insys spent more money on legal costs in Q1 of this year than it did on everything else combined.

Meanwhile, the folks whose lives have been destroyed by the opioid crisis are lining up at the door to sue the company’s metaphorical butt off. (While corporations are technically people in the U.S., they do not have actual butts.)

However, with a chapter 11 bankruptcy, Insys could duck many of those lawsuits. At the time of writing, Insys’s stock (INSY) had tumbled 40% in the morning trading.

According to the Wall Street Journal, Kim Jong Nam, the half-brother of North Korean dictator Kim Jong Un, was working as a CIA informant when he was assassinated in 2017. (Intelligence experts are calling it the worst case of tittle-tattling they’ve ever seen.)

Kim Jong Nam was the eldest son of hair icon and North Korean leader Kim Jong Il. For many years, he was next in line for the throne (or whatever dictators-for-life sit on).

But he fell out of his father’s good graces in the early 2000s (presumably for not wanting that one haircut), clearing the way for his brother Kim Jong Un.

Nam was assassinated in Kuala Lumpur airport in Malaysia in February of 2017, when two women smeared his face with a toxic nerve agent. (Hint: If two strange women try to smear you with something, you’re being assassinated.)

Both women have since been released, claiming they thought they were part of a TV prank show (North Korea’s Funniest Home Killings).

Nam rarely left the Chinese enclave of Macau (because of the whole assassins always trying to kill him thing). But according to the WSJ’s source, he was in Malaysia that week to meet with his CIA contact.

It’s unclear what, if anything, Nam had to offer the CIA in the way of intelligence. It had been years since he’d been back to North Korea (again, assassinations and stuff) and he’d never been privy to Kim Jong Il’s inner circle.

But it just goes to show how desperate the CIA is for information on the creepier of the two Koreas.

Amazon’s (AMZN) brief flirtation with delivering food is coming to an unceremonious end.

According to a statement given to Geekwire, the Jeff Bezos Everything Machine will shutter its Amazon Restaurants service later this month and go back to focusing on what really matters — delivering uncooked things like dried pasta and doormats.

The confusingly named Amazon Restaurants has never been the five-star success the company hoped it would be. The service kicked off in Seattle in 2015, before quickly expanding to 20 U.S. cities and London. But Amazon always struggled to claim a substantial share of the market from its established competitors GrubHub and Uber Eats. 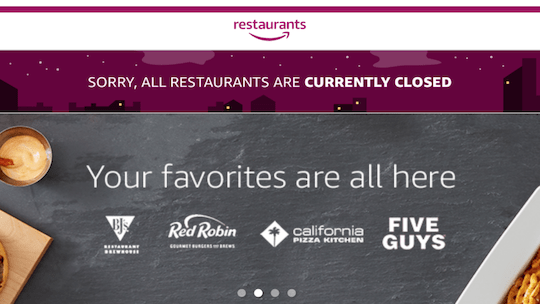 This is going to be so disappointing for the 18 people that used this service.

Without the looming presence of the all-consuming Amazon in the room, Grubhub and the other food delivery apps can breathe a sigh of relief. Amazon wasn’t very good at the whole food delivery thing. But you never know when those guys are going to pull a magic food delivery robot out of their butt.

GrubHub (GRUB) shares enjoyed a 7% bump from the news of its rival’s demise. While Uber, for whom food delivery makes up a fraction of its business, seemed largely unaffected by the news.

While Amazon seems to have given up on trying to get hot pasta to Mark when he’s depressed and doesn’t want to cook, the company isn’t leaving the space entirely.

Earlier this year, it invested heavily in the European food delivery service Deliveroo. And I expect we’ll see them go down a similar route as back home.

If Amazon was going to acquire an established company, GrubHub (who saw Q1 revenues of $324, up 39% year-over-year) would be a prime candidate.

Cyber Attack at the Border

A cyber attack at the U.S. border has compromised tens of thousands of travelers’ identities, according to U.S. officials.

A subcontractor working for U.S. Customs suffered a malicious cyber attack last month. But the extent of the damage done was unknown until now. (Nerd crime is harder to assess than regular crime.)

In a statement, a spokesman for U.S. Customs and Border Protection said the attack compromised photos of travelers’ faces and license plates.

Taking a page out of the Clinton Guide to Playing Yourself, the subcontractor had transferred all the data off CBP’s network onto its own private server, violating security policies.

“The subcontractor’s network was subsequently compromised by a malicious cyberattack,” the spokesman said. “No CBP systems were compromised.”

The CBP says that no other information other than travelers’ faces and names were taken. It’s unclear what, if anything, this information could be used for.

But it highlights the strategy increasingly used by foreign cyber hackers. Instead of attacking government institutes where the cybersecurity is high, they’re targeting contractors who have access to military information.

Just last March, it was discovered that contractors of the U.S. Navy had been hacked by China and hadn’t taken steps to fix the problem. (If it ain’t broke why try and keep the Chinese out of it?)

Cyberwarfare and data theft are becoming an integral part of foreign nations’ efforts to destabilize the U.S. Which means, either we get better at cybersecurity, or we’re about to have our asses handed to us.

Yesterday we reported on NRA board members using their positions to earn hundreds of thousands of dollars from the group. I heard from dozens of card-carrying NRA members last night. Some of you said the board members were entitled to a little graft. But the majority of members said they were disappointed by these revelations:

I was just about to send in my lifetime dues when I saw this. If its true I won’t send them a penny. That money is supposed to be defending our rights not their pockets. VERY DISSAPOINTING.— Pete D.

I personally believe they Should Be Allowed To Keep Every Penny! They’re Helping Protect Americans and looking out for All Of Our Interests – Even Dumbass Reporters Who Don’t Deserve It! If we don’t keep fighting against These USELESS LIBERAL DEMOCRATIC POLITICAL Hacks we’ll lose Our 2nd Amendment Rights. I’m A Proud Lifetime Member And Believe They Are Worth Every Bit. Instead of putting them down you Should be Thanking them for looking out For You Too — Todd E.

The NRA has been a hollow fraud since they bowed to the Clintons and the anti-2nd Amendment crowd. They put on a phony show instead of fulfilling their true objective (and take as much cash from those who want to fight for freedom but can’t spot a phony)— Ron V.

I think they should get paid for speaking, but 90% of the profit should go into the NRA operating expenses fund, as they are working for the NRA. Also there’s no excuse for stealing from the NRA to buy clothes, or travel, or for any other reason. — Steven H.

Again, I think it must be said that no laws were broken here. I don’t think the NRA should be disbanded and all the guns turn into shovels or whatever you do with them these days. This is an issue between the members and their board, or more specifically, who they would like their board to be.