Are the mainstream thought bubbles finally becoming hip to the consequences of the funny munny charade?

Why else would BOTH the Fed-head Jerome Powell and SF Fed Prez Mary Daly come out on record to deny claims that the Fed’s policies create economic inequality?

If you’re an astute reader of our digital missives, you know this horse has been beaten to a virtual pulp…

You also know that, for those other birds who happen to read beyond headlines and placards, the Fed might have trouble keeping this narrative afloat.

“Unfortunately for Powell, Daly, and other Fed promoters, a cursory look at the Fed’s operations shows that the central bank is the leading cause of economic inequality.”

Today, we’ll take a quick jaunt through the ways in which the Fed quietly screws over our dear ol’ “Average Joe.”

Furthermore, as our own Graham Summers reveals in today’s featured article below…

We’ll also take an “inside look” into how the Fed is currently using a “loophole” to gain an unprecedented level of influence on the markets.

And it’s doing so, Graham explains, in ways it’s technically not allowed to do, according to its very own founding document, the Federal Reserve Act.

But more on that — and how you can be one of the lucky few to actually benefit from this funny munny circus — in a moment.

How the Fed Creates Income Inequality

As you well know, the Fed manipulates the money supply by buying and selling government (in)securities.

“This means,” Dr. Paul goes on, “that when the Fed decides to pump money into the economy, it does so by putting it in the pockets of wealthy, and oftentimes politically-connected, investors who are able to spend the new money before the Fed’s actions result in widespread inflation.”

As you can see, however, it’s not all bad…

So long as you’re in the club.

These “dark money” movements create pockets of opportunities for the beneficiaries flush with cash.

Indeed, it’s a good gig if you can get it…

To be among the first, that is, to invest in the bubbles formed by distorted interest rates.

Those early-in/early-out “investors” have long but laughed their way to the bank and back.

Our dear average Joe, in short, doesn’t benefit in the same way a card-carrying crony does… through bailouts and other stimulus schemes.

Alas, nor do the clouds tend to get thinner from here for our dear ol’ Joe, either.

As he sits on his front porch in his favorite rocker, eyes closed, repeating his newfound mantra, “This too shall pass”…

“Middle- and working-class Americans,” says Paul, “also suffer from a steady erosion of their standard of living because of the Fed’s devaluation of the currency. This is the reason why so many Americans rely on credit cards to cover routine expenses. The Federal Reserve is thus the reason why total US credit card debt is almost one trillion dollars.”

I know what you’re thinking.

Things have gotten pretty bad already for Joe… and they can’t get much worse.

Isn’t there any good news?

Well, again, that depends entirely on which aisle you happen to be sitting in.

“Big-spending politicians are also beneficiaries of the fiat money system,” Paul points out. “The Fed’s purchases of US debt enable Congress to massively increase welfare and warfare spending without increasing taxes to politically unacceptable levels. The people pay for the welfare-warfare state via the Fed’s hidden and regressive inflation tax.”

Joe might be short on this month’s water bill, but the federal government’s well-connected, insulated from such quaint character-building exercises, have the luxury of appreciating it from afar.

(Mostly from that one award-winning miniseries on Netflix… and, let’s not forget, those two NY Times bestsellers… all of which invoked a pretty healthy dry cry or two… and increased demands for the government to “do something.”)

That, at least, is the gist of the view from the apogee.

But as is our beat, let’s zoom it down to what we can control…

And figure out how we can position ourselves to survive and thrive in a world unfit for the individual who simply wants to be left alone.

For that, we turn to Summers to reveal how the Fed is influencing the markets… why it’s far from a “conspiracy theory”… and how it’s created unintended positive consequences for those “in the know.”

And, of course, how even our dear ol’ Joe can become one of them.

Check it out below.

A Most Profitable Market Mystery

Last week I outlined how the Fed will soon be buying stocks outright.

If you missed it, the run-down of my work is as follows:

Which brings us to today.

While the Fed is technically not supposed to be intervening in the stock market, “someone” has been pushing the market higher via the overnight futures session.

JPMorgan put out a research note last week explaining that ALL of the market’s gains since May 1 have occurred during the overnight futures sessions. During normal daytime hours (9:30AM to 4PM EST), stocks have technically gone NOWHERE for two months. 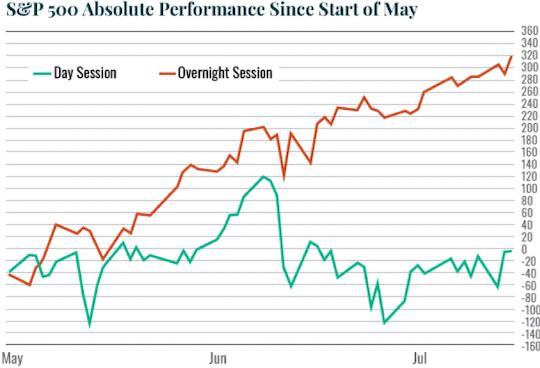 In simple terms, “someone” is ramping the market higher in the overnight session – when liquidity is low, and the market is easier to manipulate.

I believe that someone is a central bank.

Are Central Bankers Behind This?

Before you label me a conspiracy theorist, consider that the CME Group, which manages the futures markets, has a program that is literally called the Central Bank Incentive Program.

This program is designed specifically to give central banks a discounted rate on their purchases of stocks, bonds, interest rates, and other futures. You can read about this program here.

So we know for a fact that central banks are permitted to buy futures. However, I actually believe central banks are doing more than this. I believe they are actively intervening in the markets during the open session as well.

A Brand-New Way of Investing

Thanks to a recent research breakthrough…

I’ve uncovered massive pools of anonymous money that mysteriously appear in the stock market at roughly the same time each week.

Due to their size and unique pattern, I’m certain that these massive trades are coming from central banks.

And by simply tracking them, I’ve proven how you can predict exactly which stocks are set to soar… before it happens…

Giving you the chance to pull consistent cash from the market just about every week.