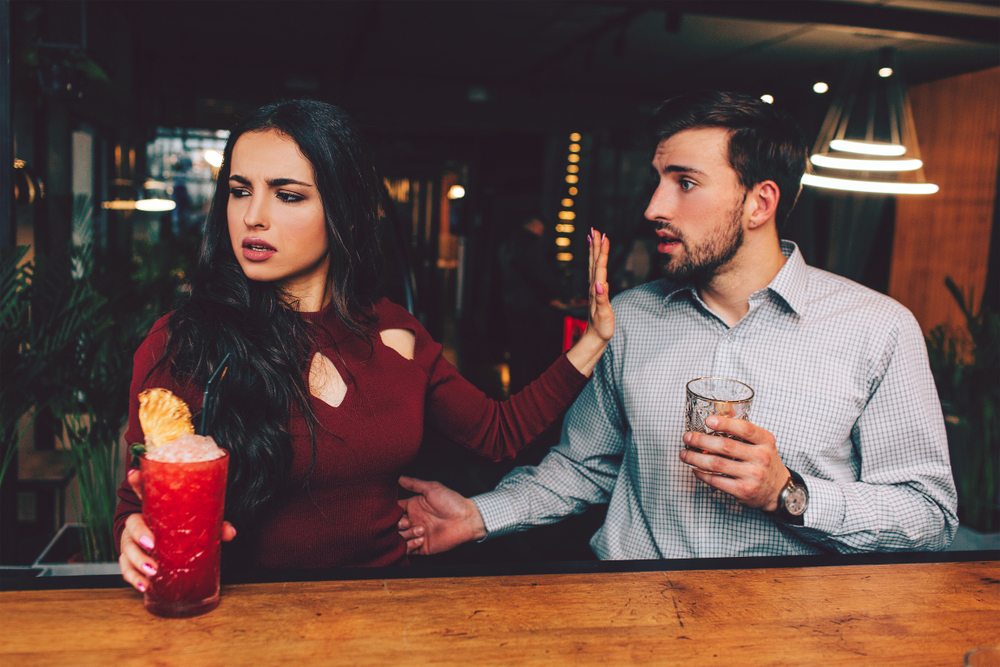 "I want to talk about what's in your pants"

Softbank Takes Over WeWork, Gives Neumann $1.18 Billion to Go Away

The Softbank Group will take control of WeWork, as the “rebel without a business plan” runs out of cash and has to ask daddy to bail it out.

Softbank, who already owns a third of Adam Neumann’s Money Hole™, was reportedly competing with JPMorgan Chase to see who gets to drag this corporate disaster out of the mud, fire everyone, and turn it into a profitable real estate company.

The deadline for JPMorgan and Softbank to submit their competing “rescue proposals” was up yesterday. And according to the folks at the Wall Street Journal, WeWork has already accepted the Softbank deal.

If that makes WeWork sound as desperate as a newly divorced dad on Tinder, well, it’s because they are.

Reports from inside the company suggest WeWork is running dangerously low on bread, moolah, clams, and dough.

According to the tech website The Information, WeWork executives were discussing laying off a third of We’s workforce, about 5,000 people, to try and stem the flow of cash.

However, news broke yesterday that the company couldn’t afford the severance packages of its planned layoffs and had to backpedal on the plan. 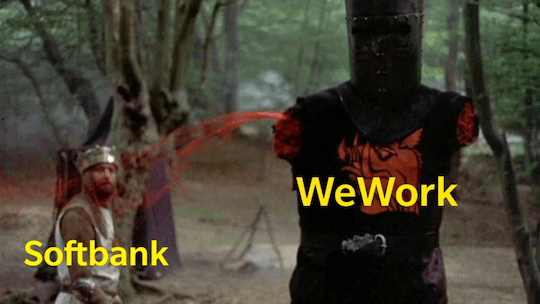 Analysts estimate WeWork, which was valued at $47 billion in January of this year, will be revalued at just $8 billion in the rescue deal with Softbank.

SoftBank has reportedly agreed to buy up $1 billion of stock from company founder Adam Neumann, and pay him a “consulting fee” of $185 million to consult his ass out of the building and never come back.

Following the company’s now-infamous IPO filing, Neumann (who sports a party-in-the-back, bad-at-business-in-the-front haircut) stepped down as CEO. But according to the WSJ, Softbank will ask him to step down from the company’s board and cut almost all ties to the company.

Shares of gene-therapy company Biogen (BIIB) surged 30% this morning after announcing it would seek FDA approval for an Alzheimer’s drug it axed earlier this year.

(And as with Cousin Duncan’s marriage proposal to the woman who left him for the owner of a raw kombucha stand, I remain skeptical.)

When Biogen discontinued the Alzheimer’s drug and deadly Harry Potter curse aducanumab in March, investors sold off the stock in droves. But, in a single morning, the company erased its entire 25% decline.

Biogen halted research into aducanumab (which looks like a word backward but isn’t) when analysis of a data set from trials showed that the drug didn’t work. But, wouldn’t ya know it, after their stock tanked, they had another look at those numbers and hey, it works now!

In a press release, the company said that analysis of a larger dataset with greater exposure to high doses of the drug showed that the bamunacuda “reduced clinical decline in patients with early Alzheimer’s disease.” (Which is easier to see if you squint and look at the data out of the corner of your eye.)

“Patients who received aducanumab experienced significant benefits on measures of cognition and function such as memory, orientation, and language,” the company said.

Biogen also reported its Q3 earnings this morning and exceeded analysts’ expectations. (Which isn’t hard when no one believes in you anymore.)

Profits rose 7.1%, buoyed by demand for its rare muscle drug Spinraza (these guys are just the worst at naming their incredible life-changing drugs), while total revenue for the quarter rose about 5%.

The company plans to file for approval for aducanumab with the FDA in early 2020.

P.S. Does your portfolio need a check-up?

Well, 10-time trading champion (and former Air Force pilot) Chuck Hughes is no doctor, but he does use his own “X-ray” to see what’s really going on inside a stock.

This is a 25-year tested proprietary method, with a mind-blowing 91% win rate in the last 5 years alone.

And for the first time ever… he’s going to reveal his step by step system during a special free online event on October 30 at 1 p.m. Eastern.

The best part? This system is only three steps and takes less than 5 minutes per week.

Just click the button below and we’ll send you all the details.

Fisher Investments No Longer Getting in Fidelity’s Pants

Fidelity ended its $500 million relationship with Fisher Investments, after CEO Ken Fisher made multiple speeches comparing his business strategy to his trying-to-bang-ladies-in-the-hotel-bar strategy.

This is the fifth major client to part ways with Fisher, totaling more than 1.8 billion in lost assets, since the audio of Ken’s hot tips for picking up ladies (and clients) were leaked to the press.

As a speaker at both the Tiburon CEO Summit and Evidence-Based Investing conference last year, Fisher posited his presumably evidence-based theory that winning over clients is a lot like a good pickup game.

“When trying to win new clients, you need to be careful,” said Fisher. “It’s like going up to a girl in a bar and saying, ‘Hey, I want to talk about what’s in your pants.’”

According to attendees at the Tiburon Summit, our boy Ken also made reference to genitalia, Jeffrey Epstein, and tripping on acid. (Hopefully not all in the same story.)

A spokesman for Fidelity confirmed yesterday it was ending its relationship with Fisher, in light of the comments made at the conferences.

“Fisher Investments does not provide investment advisory services for any portion of the assets of Strategic Advisers Small-Mid Cap Fund,” said the spokesman. “Assets previously managed by Fisher Investments have been reallocated within the fund.”

Organizers of both conferences have banned Ken from speaking, but you can still find his business wisdom on Twitter: 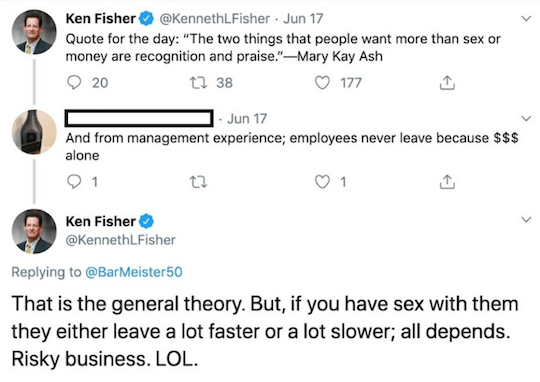 The Fed Is Finally Taking Action

For the past few years, the Fed’s maintained a tight monetary policy, which kept the U.S. dollar strong compared to most other currencies.

This month, however, the Jerome Powell Power Hour shifted gears and announced plans to inject more than $60 billion a month into the economy, which will likely have the knock-on effect of weakening the dollar.

I asked the editor of Money & Crisis and our local macroeconomic expert Graham Summers what this means for investors during these uncertain times.

I’m excited because the Fed is finally taking action to weaken the U.S. dollar.

It took them way too long to do this. And frankly, I believe a big reason why they refused to take action before was because they didn’t want to admit that President Trump was right about the U.S. dollar’s strength.

Unfortunately for them, he was. The trade-weighted U.S. dollar index is at its highest level in over 20 years. This is extremely damaging to the U.S. economy from a trade perspective.

Which is a big reason why our President was hounding the Fed non-stop for the last year. Love him or hate him President Trump always says what he thinks and is willing to whine, bully, and even fight to get it.

Well, he’s about to get it. The Fed has officially launched a $60 billion month QE4 program through which the Fed will print $60 billion in new money that it will then use to buy U.S. debt (Treasuries) from the big banks.

This comes on top of the Fed offering $75 billion in liquidity via overnight credit windows… as well as $35 billion twice a week through another credit facility.

Put simply, the Fed is now providing between $130 billion and $200 billion-plus in liquidity to the financial system every month.

All of this is going to drive the U.S. dollar DOWN.

And that’s where the opportunity lies. You see, the U.S. dollar is involved in over 90% of all currency transactions in the world. So whatever happens to the U.S. dollar has an incredible impact on every other currency on the planet.

As soon as the U.S. dollar began to weaken dramatically, it had a big impact on both the Yen and the Euro.

All of this means that we’re entering a period of currency volatility. And unlike stocks, which return only 20% a year during a BLOCKBUSTER year, those traders who trade currencies can see returns as large as 50% in just two days.